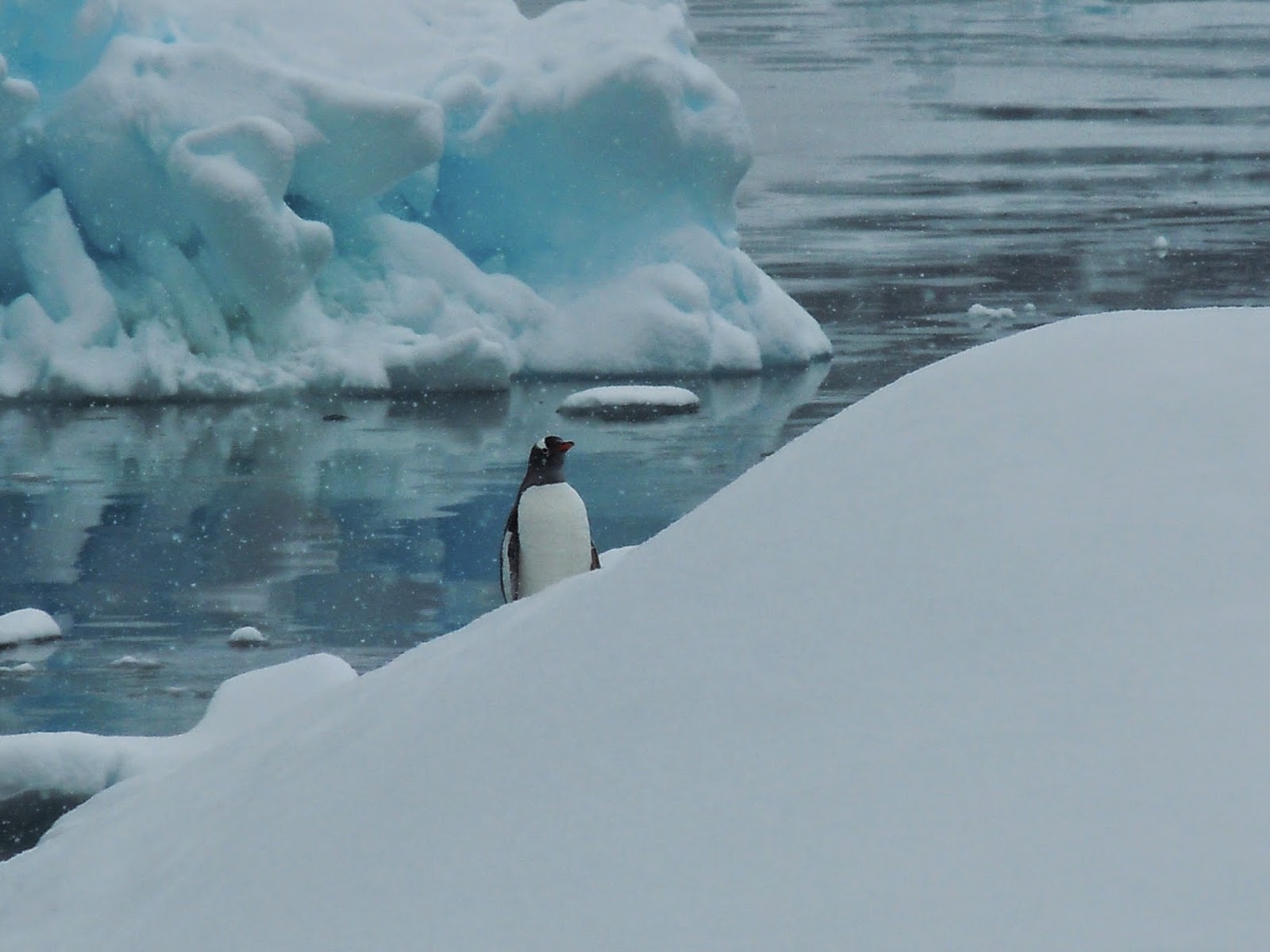 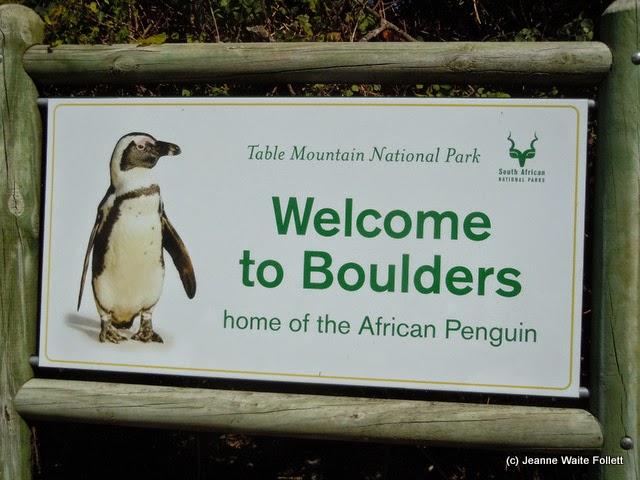 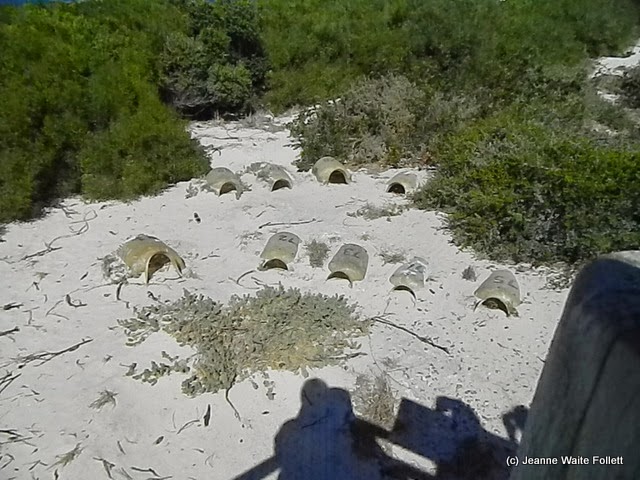 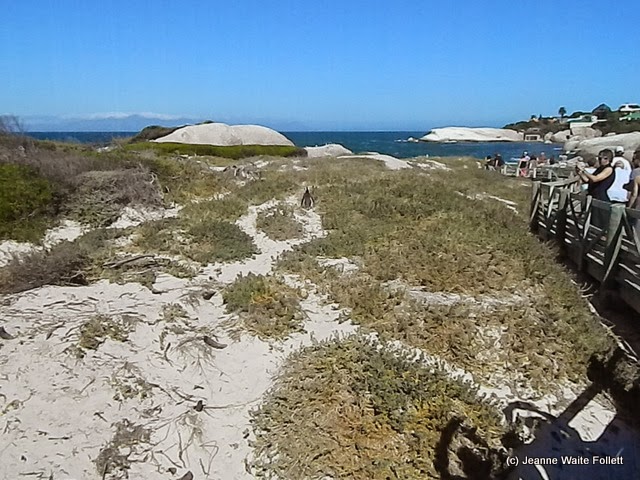 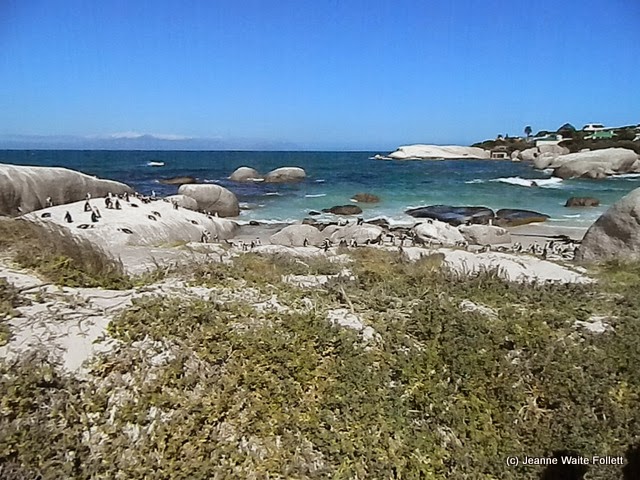 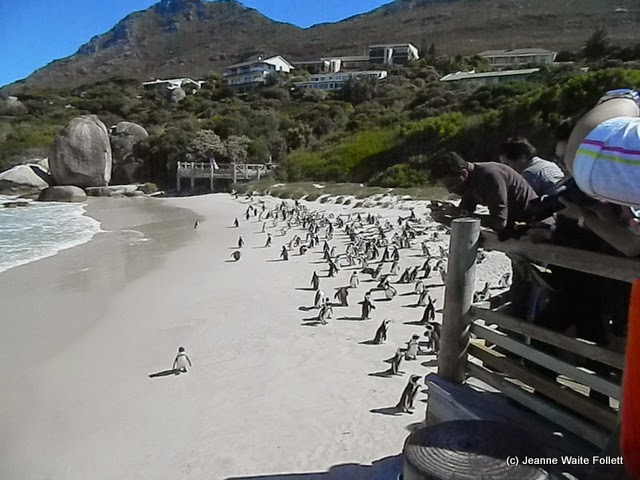 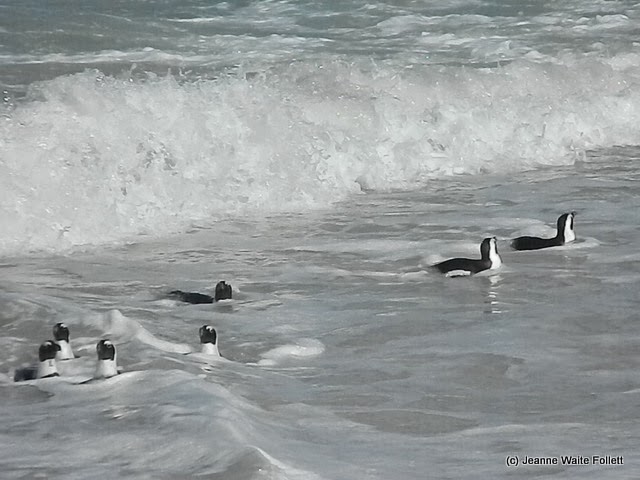 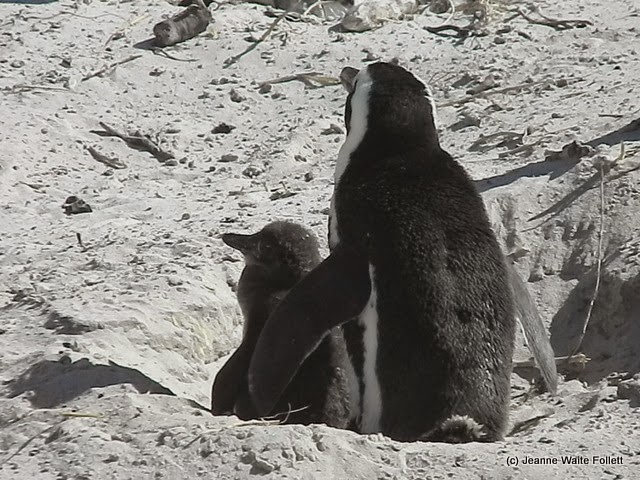 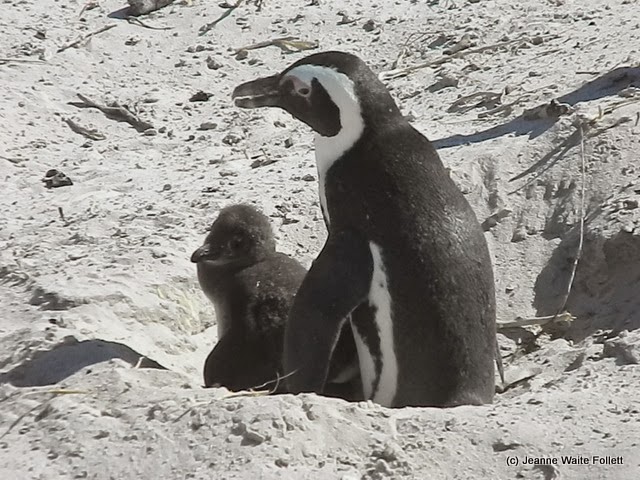 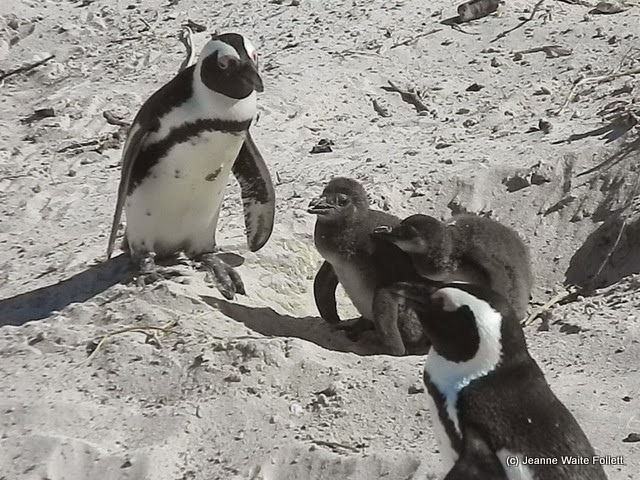 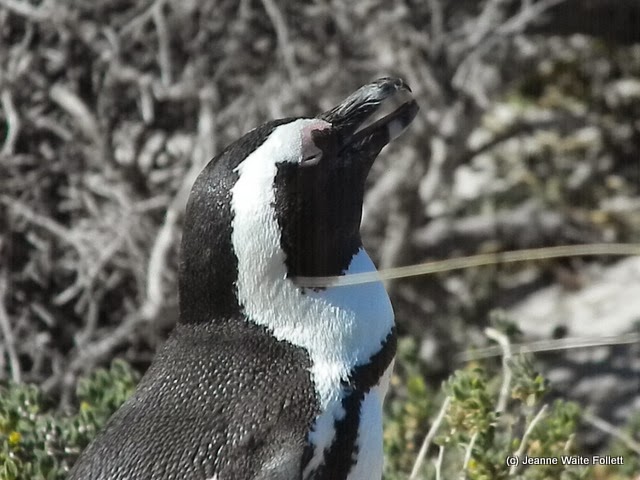 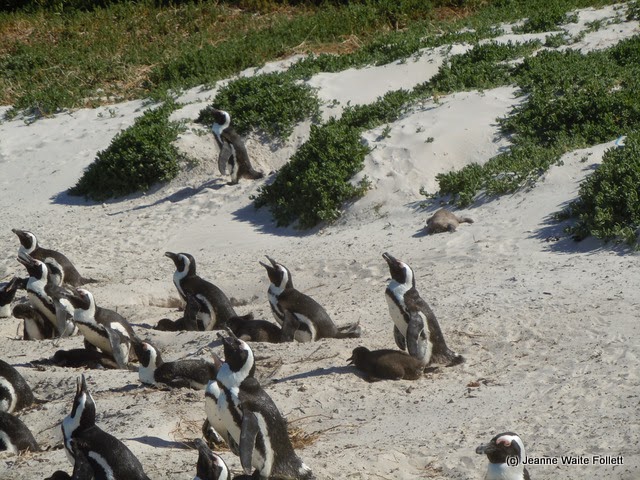 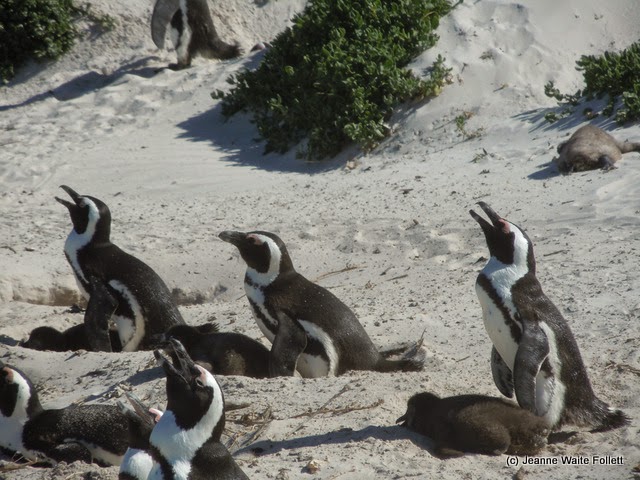 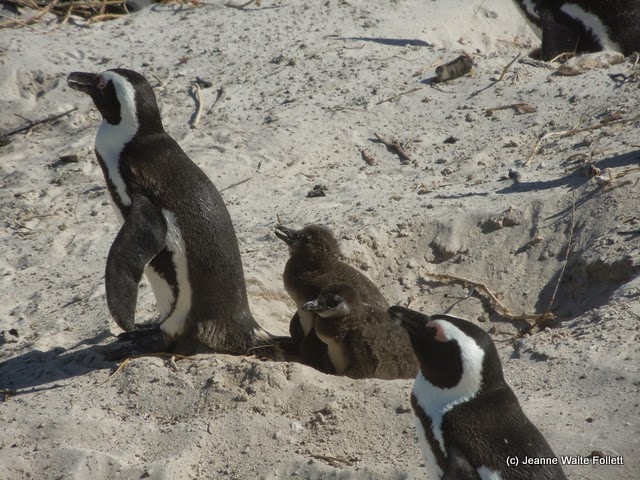 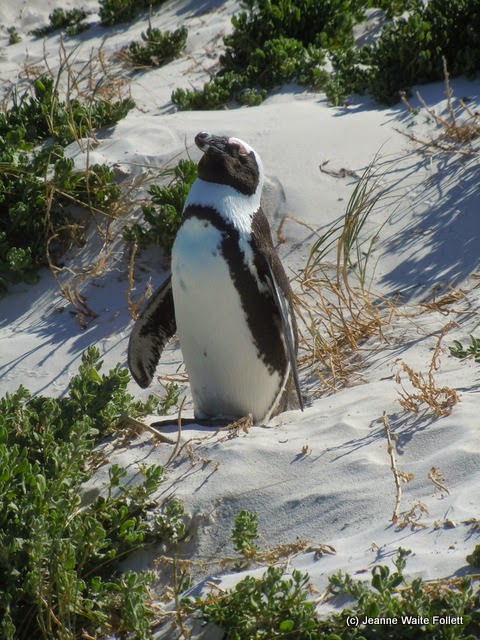 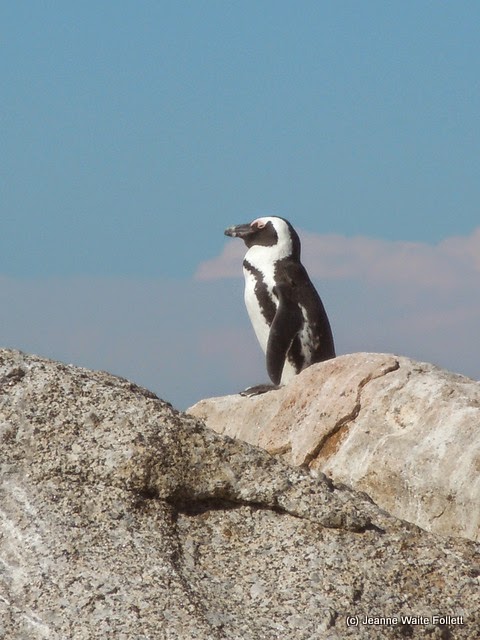 The Africa Journals, Ch. 61, Hangin' with Bonnie and Clyde

Chapter 61
Hangin' with BONNIE and CLYDE

Part Three of the Cape Peninsula

Hell, you might just be the best damn girl in Texas.—Clyde Barrow

When I first spot Bonnie and Clyde, they are enjoying each other’s company in a large grassy field, seemingly unaware they are being watched.   It is almost alarming that such a famed couple could be so careless in attitude.

But then, appearances lie in the eye of the beholder, AND appearances lie.  Bonnie and Clyde know they are being watched and how many eyes are on them.  They know to ignore the ones coming from one direction, and to focus all their attention on others coming from a different direction.   They watch the hands of the latter to see if they should approach or flee.

Their eyes, some say, are larger than their brains, the largest of any land-dwelling vertebrate.   Incredible eyesight, able to spot predators at great distances.    Not even Texas Ranger Frank Hamer could hide from these two, as he has been known to do with the other Bonnie and Clyde.

This Bonnie and Clyde duo are ostriches on an ostrich farm on the Cape Peninsula of South Africa.  Unlike her namesake Bonnie Parker, who was shy of five feet tall and 90 lbs., the feathered Bonnie and others of her ilk can stand 5.5 to 6.5 feet tall, and weigh up to 220 lbs. 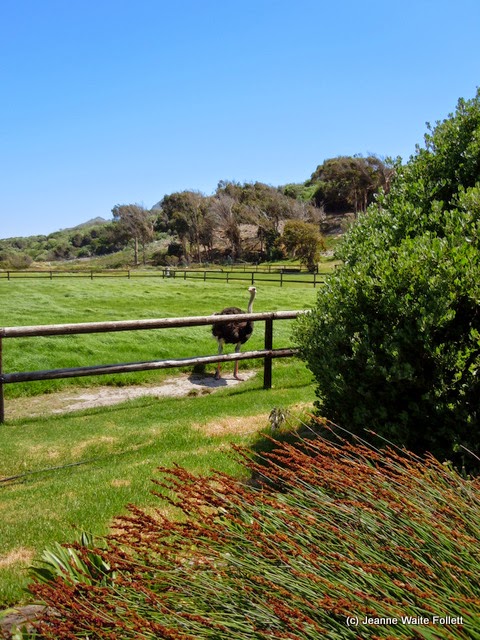 Clyde and other males can weigh up to 320 lbs. and stand over nine feet tall.   With a life span of 45 years, these two roaming this pastoral field have twice the life span of the gangsters who were gunned down in their early twenties by Texas Rangers.

The ostrich is the largest living specie of bird.  Though two-legged, they can run over 40 mph, maintain that speed for a half hour, and cover 10 to 16 feet in a single stride.   Think about that.   In one stride, an ostrich can travel across the average-sized room in a home.

They have only two toes on each foot, one without a nail and the other with a nail more like a large claw that can inflict horrific damage, and they can kick only forward.

Contrary to popular myth, neither Bonnie nor Clyde nor any of their relatives hide their head in the sand when frightened.   They rely on their great speed to make their escape or they lie flat on the ground, relyingon distance and heat waves to make themselves appear as mounds.   Or, when cornered, they kick forward with that large toe nail. 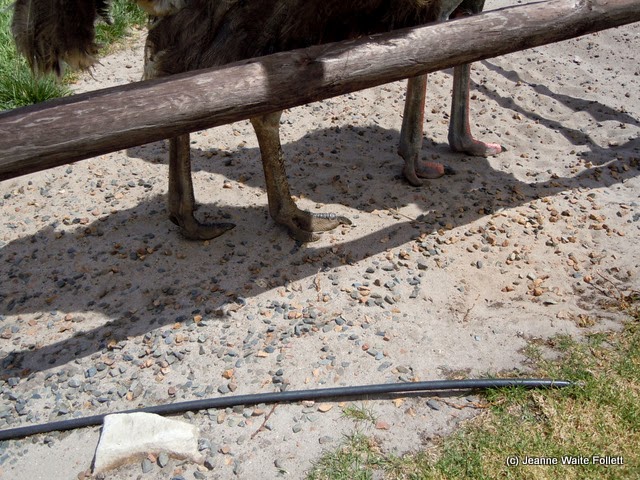 Observations of ostriches with their heads in the sand searching for pebbles to swallow to grind their food might be the origin of the mistaken legend.  It might also derive from the pale color of the ostrich’s neck and head that seems to blend with the sand when they lie flat. 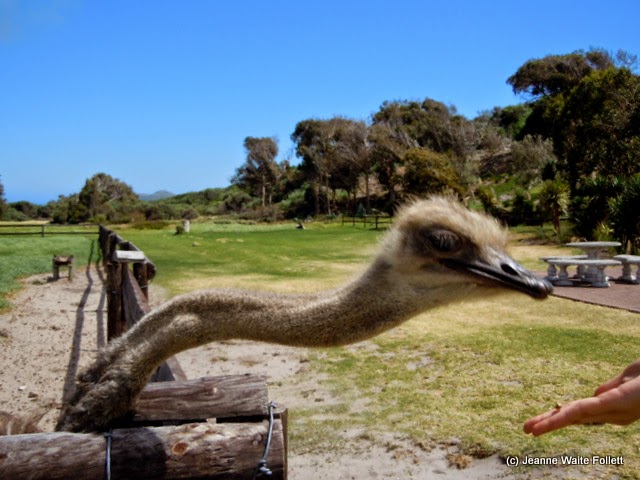 Female ostriches, the poor things, lay large ovoid eggs that are five inches by six inches and weigh three pounds.   The females in the harem incubate the eggs in the communal nest during the day while the male has the night shift.   At this ostrich farm, however, a mechanical incubator takes over the nursery duty, all carefully temperature-controlled and monitored. At one time, the natives of Africa used ostrich eggs to carry water, first eating the contents and then plugging the small hole with earth.   Now, the empty eggs are decorated and sold to tourists.

Ostriches usually are vegans, though they occasionally sin and eat invertebrates.

Now, let’s slip away from their hearing range and discuss the reasons for ostrich farms.

One is their gorgeous tail feathers, numbering 50 to 60 feathers on each bird.   Unlike most birds, the ostrich feather does not have the little hooks that lock the smooth feathers together.   Hence, their feathers are soft and fluffy and much prized for feather dusters, much better than Swiffer dusters. 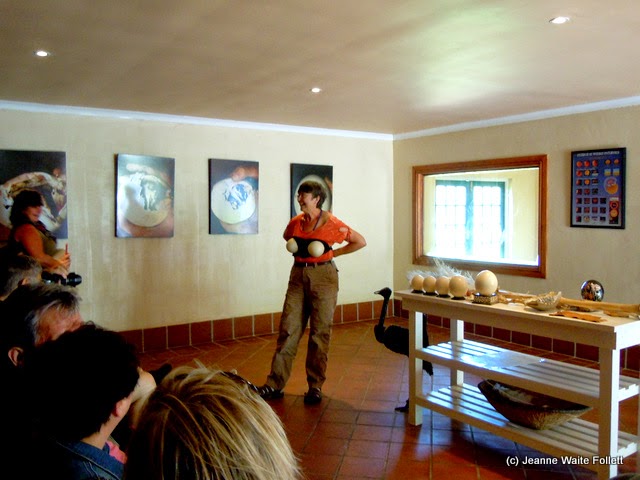 The second reason is for their hides.   Many products are made from this leather.

And third, their meat is delicious.   I have first-hand knowledge of this. 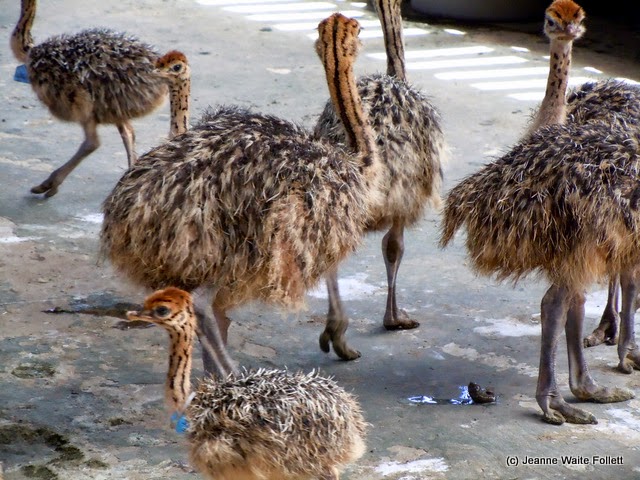 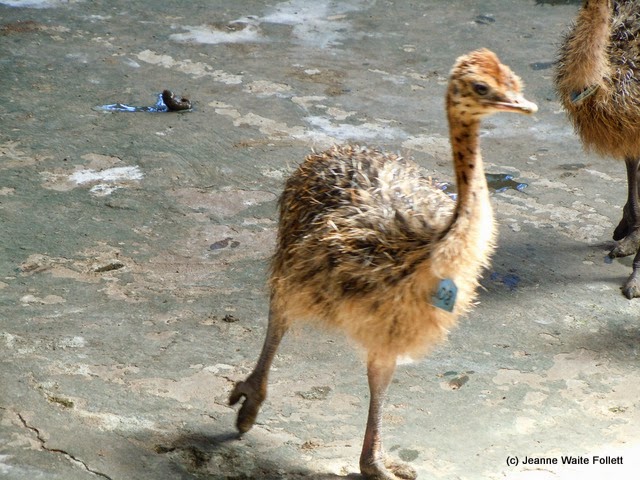 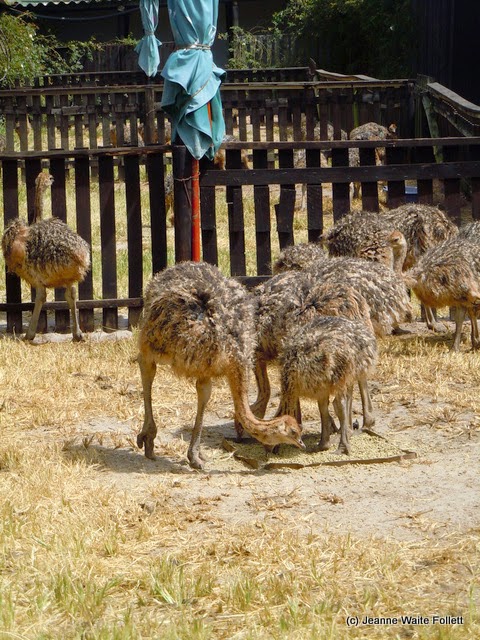 Photos of ostrich feet from Wikipedia 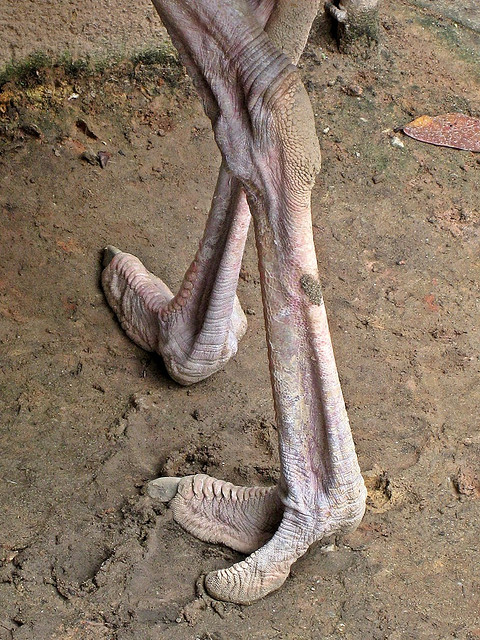