Deep within the heart and soul of every person, I believe, is an innate yearning to leave a mark upon the world. Large or small, that mark is meant to say, “I was here. In this way, I mattered.”

That mark could be a writing of such power and imagery that the words can not be held captive on the printed page, but instead propel themselves into the imaginations of readers. It could be an invention that benefits mankind, a theory that expands our knowledge, a discovery that changes man’s understanding of his world. Or, it could be as simple as the ubiquitous “Kilroy was here” graffiti.

Often the people who leave such marks are not recognized until after their death, though whether that is because their accomplishments are not fully appreciated until then, or because of the more prudent hope that the person live out his life with decorum and not discredit himself with scandal, I could not say. Nonetheless, our world abounds with accolades.

Those honored during their lifetime generally receive their awards with dignity and humility. Some are honored, but have never beheld the reality of their genius.


The design he submitted to the contest was simple in the extreme: a series of curved lines, two straight lines intersecting across the center. Yet somehow this scant drawing evoked the sea, the romance of sailing ships, the historic birth of a country.

The sails, most likely, came of working for his father in a shipyard, their voluptuousness inspired by the hours he spent beneath them as they reached with the wind. His talent at sculpture and free hand drawing, his artistry and imagination compounded a germ of an idea into an explosion of creativity.

Thus, in 1957, the design of 38 year old Jørn Utzon of Demark captured the eyes of the judges in the anonymous international competition. Out of 233 entries from 32 different countries, his sketch of black lines on white paper, a drawing rather than a design, was selected as the winning entry. Utzon was selected as the architect for the Sydney Opera House to be built on a point of land jutting into the blue waters of Sydney Harbor. Its neighbor would be the majestic Sydney Harbor bridge, the world’s largest steel-arch bridge.

“The drawings submitted for this scheme,” said the Assessor’s Report, “are simple to the point of being diagrammatic. Nevertheless, as we have returned again and again to the study of these drawings, we are convinced that they present a concept of an Opera House which is capable of becoming one of the great buildings of the world.”
When construction began in 1959, Utzon’s design was far beyond the structural engineering technology of the day. Eventually, the geometric shapes of the shells evolved from parabolas, through ellipsoids, to the final design of sections of a sphere. The credit for this idea is as enmeshed in controversy as the fourteen years of construction. 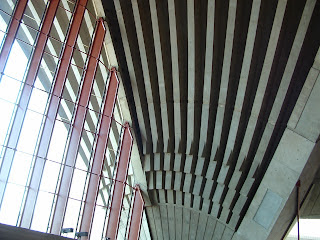 Cost and time overruns large enough to boggle the mind along with a change in the political administration of the state of New South Wales, trapped Utzon in a bitter battle. Eventually, he resigned in 1966 and returned to Demark. Others were brought in to finish the building.

Finally, the Sydney Opera House was opened by Queen Elizabeth II on 20 October, 1973, many years after its original estimated completion date of 1965. The final tally of costs at $102,000,000 Australian represented a 1400 per cent estimate overrun.
Interior concrete ribs of sails, Soucy photo

Utzon’s concrete sails, which have also been called “shells” and “vaults,” spring full-blown from a four and a half acre platform, or podium.

From street level, a visitor climbs the dozens and dozens of steps leading to the main performance halls—the Concert Hall and the Opera Hall—and in so doing, symbolically leaves behind the everyday world to enter the realm of art and creativity. 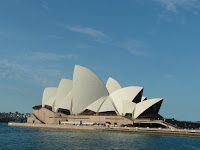 Overhead towers the first of the sails, supported by massive pre-cast concrete ribs. Each sail is entirely independent of the interior structures, so that an out-dated hall can be torn down and rebuilt without removing the enclosing shell.

Under the sails are five main performance spaces, other areas used for performance, a recording studio, five restaurants and four souvenir shops. Various venues are used for conferences, ceremonies and social functions such as weddings.

More than a million light gray and beige tiles were used to cover the roof shells. Some are matte and others are glossy finished. 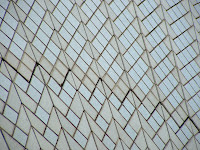 Some interiors are covered in pink granite, while inside the Concert Hall and Opera Hall, the walls are black to draw attention to the stage. Tiered seats are angled towards the stage, and off-set, so that there are no obstructed views. The concert hall features the largest mechanical tracker pipe organ ever , with 10,154 pipes.

Utzon has never seen the completed Opera House, so embittered was he by the circumstances surrounding his resignation.

He declined an invitation to visit in 2000 when Sydney hosted the World Olympic games. In recent years, his son Jan has been associated with the on-going work at the building, and discusses all matters with his father.

In 2004, a small multi-purpose room, the only interior room designed by Utzon, was renovated and renamed the Utzon room, with his approval. Other changes are likely to reflect the vision of its original architect, and plans have been made for a Design Principles document, which will serve as a guideline for future generations when updates to the structure are needed, as well as explain the underlying design principles to the casual reader. 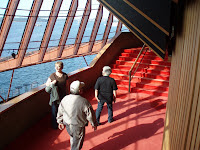 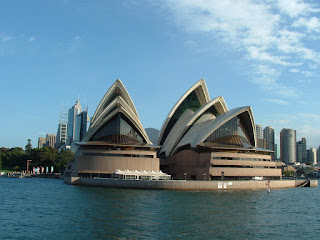 It seems unlikely that Utzon, now 90 years old, will ever see the finished reality of his genius, but one can always hope. It is recognized instantly around the world, as iconic to Australia as the pyramids are to Egypt, the Statue of Liberty to the United States, and Big Ben to England. If a building can be revered, this one is.

I believe that I leave a piece of myself with every person with whom I communicate, at every place I visit, in everything I do. And, I take a piece of that person, that place, that thing with me.

Other than a souvenir postcard, I took nothing physical from the Sydney Opera House. I did not pry off a roof tile, carve my initials in the arm of a seat in the concert hall, or Sharpie my name in indelible ink on the marble walls of the mezzanine. The things I leave and take are intangible. Nonetheless there is inside of me, in that very special part of my soul where my most precious memories dwell, a piece of this magnificent paean to the world of imagination and expression and creativity.

Every second, every minute of my days, some sublime abacus tallies up the sum of those pieces, and I am the better for it. 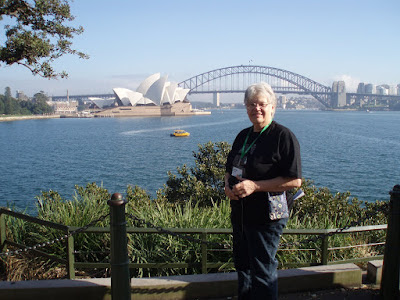 Kilroy was there. KC Hart photo