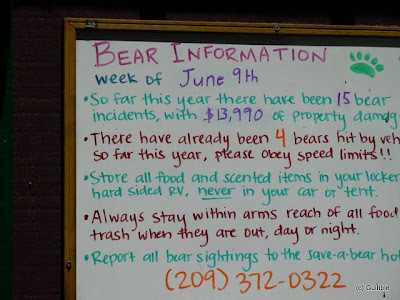 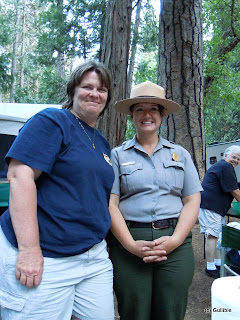 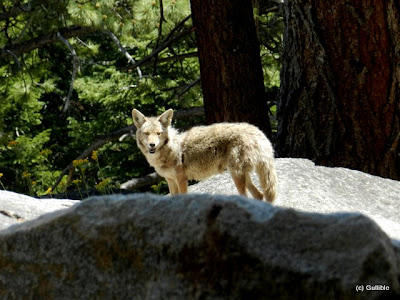 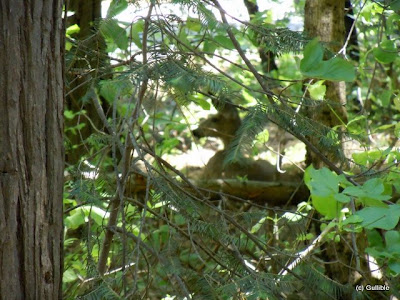 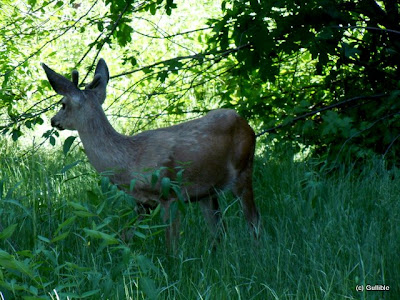 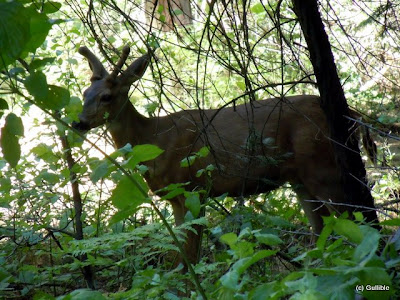 My introduction to Yosemite began at its southwestern gate.  I “paid” the entrance fee for the four of us in Norman’s truck, flashing my senior pass, one of the great advantages of reaching the Age of Medicare.  Never mind that everyone else in the truck had a senior pass also.

Not only does it grant free lifetime entrance into all our national parks, it also confers 50 % discounts on camping fees.

“That’s El Capitan.  We’ll go there one day and watch the climbers.”

“Can you see Yosemite Falls?  Look through the gap in the trees and you’ll see the lower falls.”

“That’s where we used to camp before the flood.”

Ah, yes.  Half Dome and Ansel Adams’ famous black and white photo with the full moon.  Something familiar, but I was mentally trying to arrange what I was seeing with my preconceptions based on various photos and TV news videos.

By the time we got to Upper Pines campground, I was thoroughly confused, turned around, and disoriented.  The map we’d been given by the ranger at the northern gate didn’t help much either.

The campground spreads along paved loops beneath the cedars, red fir, and Ponderosa pines—all tall trees that block most of the hot sun as well as the views of the granite walls of this narrow valley.  While I’ve seen numerous photos of the two most famous landmarks of Yosemite, those being Half Dome and El Capitan, I hadn’t realized how narrow the valley was between those icons.

Kristy and Sally had staked out our territory in the two campsites we had reserved.  Fortunately the two sites were almost directly across from each other.  And, they had a tent set up for me, complete with cot, memory foam mattress, pillow, and welcome mat.  I moved right in with my gear. 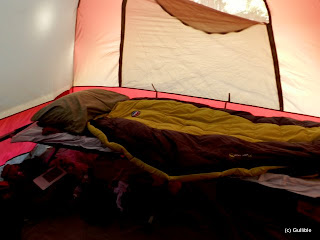 And right out again, sans the gear.  It was hot in there at mid-day.  A nice folding chair in the shade beckoned to me, and Sally handed me a tall bottle of ice water.

Norman set up the tent trailer in the spot across the road, and soon Julia and Kathy arrived with another tent trailer.

Then came the fun part—trying to get all the food and scented items (like toiletries and such), stored safely in the steel bear-proof boxes, called bear boxes, for short.

It was a losing battle, despite rigorous re-arranging and organizing.  Food for meals later in the week went to the bear box across the road, food for meals sooner stayed in this site.  But, what to do with the excess? 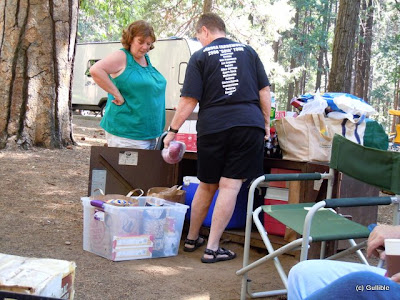 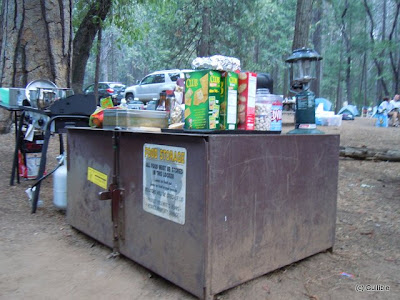 While all this was going on, a fifth wheel trailer backed into the site next to us, and while dad leveled the trailer, two little girls immediately made friends with us.  Three year old Emma raced around in circles, showing how fast she can run.

Then someone in our group had a brilliant idea:  “Are you going to be using your bear box?” she asked of Emma and Kelly’s dad.  He was not.  Because he had a hard-sided trailer, they could keep their food in it.  We were welcome to use all but the small portion he needed to store his outside grill.


In went the birthday cakes, toiletry bags and overflow from the other boxes.

We were set and settled.

Kathy’s e-mail said, “Going camping for a week in Yosemite with the usual suspects.”

I promptly got myself invited and decimated my airline mileage account to get a last minute ticket.

The “usual suspects” vary in number according to where and when the action is, but the basic core is four sisters, two identical twins, and one twin’s husband.  It used to include the other twin’s hubby, too, but he now chooses to stay home and work in his wood shop.

I’ve been to Australia, New Zealand, and Fiji with this group on one trip, and cruised the inland waterways from Moscow to St. Petersburg on another.  I went polar bear viewing in Manitoba with three of them, and this November will be in Antarctica with Kathy, the suspect I’ve known the longest.

I met Kathy and Katy when they threw responsibility to the winds in their misspent youths, quit their jobs, and arrived in the tiny ski village of Girdwood where they became chambermaids (okay, housekeepers) at the Alyeska Resort Nugget Inn.  I worked for the resort, also, and we three got to know each other when I had time to assist them in the laundry room.

Kathy went back to civilization after a year.  Kathy went to work for Werner, the chef for whom I had previously worked.

On a trip to California and Kathy’s home, I met her sisters Julia, Sally, and Kristy.  I also met Katy’s new hubby Norman, and Katy’s twin Missy.


Now that Missy’s husband has opted out of the group’s travel-mania, Norman has acquired the title of Token Male.

On a few occasions, the group has come to Alaska.  Once or twice I was able to wander off with them.

Now, all are retired but for Kristy and Sally.  The traveling hasn’t slowed down a bit.

Hot air ballooning in the Australian Outback, getting drenched on the Shotover jet boat ride in Queenstown, NZ, snorkeling in Fiji, riding the canals of St. Petersburg at sunset, watching polar bears sparring—the adventures are many.