Notes from the Denali Highway: The Nature Hike, Part One

Leilani’s cell phone makes a bloop sound that indicates she has a message.   She looks, then says a friend had found upland sandpipers close to where we are on the Denali highway

“That would be a major coup!” she proclaims, so off we go.   We park, walk across the road, and start hiking up a dirt trail that’s lined with willows taller than us.   We hear lots of little chirps and tweets, but see no birds.

Eventually, the willows give way to open tundra and we are distracted by the numerous wildflowers.  The growing season is short here, and the plants and blooms are small as a result.

Soon, she says she hears a whimbrel, and after a bit of sleuthing, we spot it.   This elegant shorebird with the gracefully down-curved bill gives us several good looks before flying off. 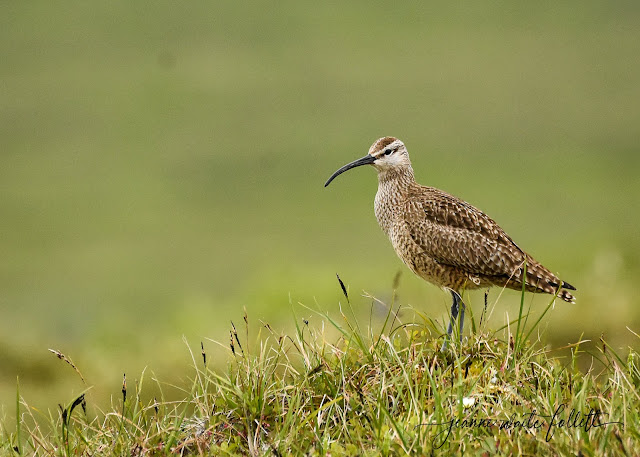 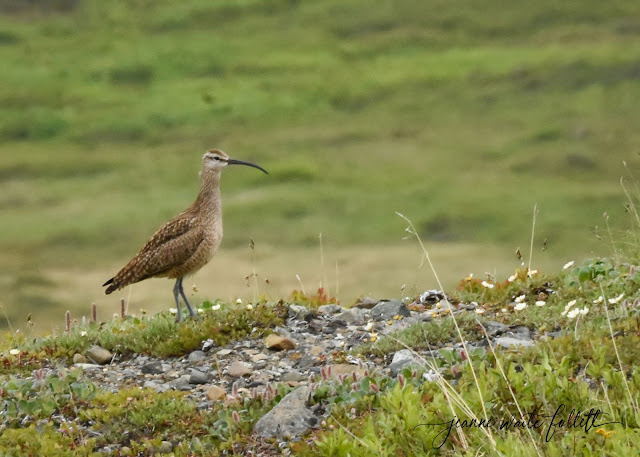 We go back to the truck, happy with our score.   It’s another lifer for me.

As we drive along, we see Jamin and Michael approaching, so we stop our vehicles in the middle of the road.

Notes from Denali: The Good Samaritan

This is going to be an epic shot!   I’m as close as I’ve ever been to a red-necked phalarope and conditions are perfect.

This is a “lifer” bird for me.

I stopped the truck on the road by a pond that’s right next to it.   The right tires MIGHT be off the pavement.   Leilani waits in the truck while I slink out and set the camera on a small pillow on the hood.   I’d rather be on the ground, sitting or kneeling, but with the skittish phalaropes, I take what I can get.

The long golden rays of the evening sun find a way through the scattered clouds and are shining on this little patch of water.   No wind, so I might even get a bit of reflection.

Only seven inches long, phalaropes feed in a frenzy of stabbing and jabbing, darting and diving at insects.  They frequently spin in circles, which is thought to raise invertebrates near the water’s surface.

All I need is for the bird to turn slightly left so the sun will put a spark of light in its eye and transform  those chestnut throat feathers to burnished copper.

"ARE YOU ALL RIGHT?!!!”   booms a voice across the tundra and with it, my hopes of the epic shot.  The little phalarope flies away on its wings and my prayer.

Leilani responds in the affirmative; I say nothing.  The speaker is one of a group of bicycle tourists that we have seen along the road.   She means well, I’m sure.   Why else would someone be parked ON the road if they weren’t in need of assistance?

Well, there IS that camera thing and that long lens…. 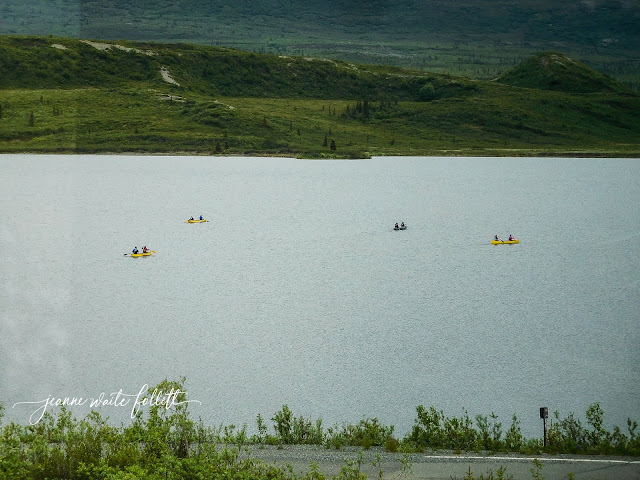 
Five hours later after turning onto the Denali highway, we arrive at Tangle Lakes Inn and check in.   Five hours, 21 miles.   That’s the way to travel. 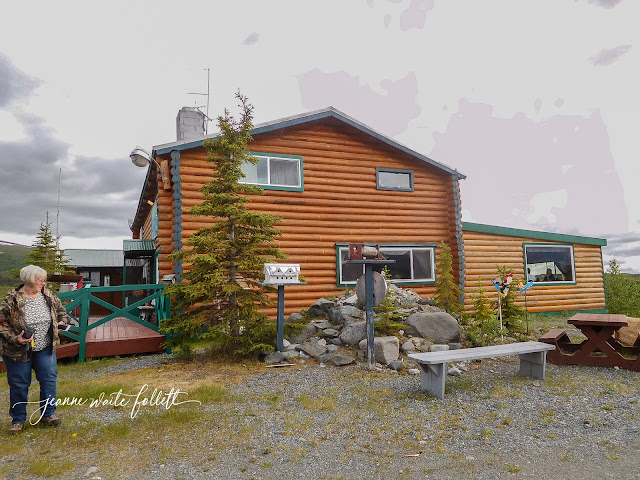 Lodge manager Violet says the guys are out in the field, but had been at the lodge earlier.  As she checks us in, she says all the cabins are named after animals and birds, and mentions the name of our cabin.   I glance at Leilani, who is busy continuing the chat with Violet, then look at the floor.

My shaking shoulders give me away.   Violet thwacks me on brim of my visor and says, “Shush!”

“It did not escape our attention,” Doug says to Leilani a couple days later, “that you girls are in the Beaver cabin.”


The cabin is actually a duplex.   A basic room, queen bed and single, bathroom, all neat and today.   Leilani has brought her electric tea kettle and sets up our tea station.   All the better for quick exits in the early mornings.

Why so high?    Location, location, location!   The only infrastructure for the lodges out here is the two-lane gravel road out front, which is irregularly maintained and closed altogether from October to May.    All other infrastructure must be provided by the lodges themselves.   They generate their own electricity, drill water wells, provide for septic disposal.   Telephone?    Not really.   Few are in cell service areas.

Mail?   Supplies?   I should have asked.   I did see the driver of a cruise/land tour coach arrive with two large bags of tomatoes, though.   I suspect the lodge owners have to go after their own supplies.


After two nights, we are obliged by prior reservations to move to multi-room unit.   The exterior is white with green trim, giving it a cottage appearance.   As soon as we enter the center hallway, I say, “This is an ATCO!”

I then proceed to tell Leilani much more than she ever wanted to learn about the ubiquitous Atco units, my expertise coming from having spent a great deal of time in them on construction jobs.   They are transportable modular units that come is various sizes and configurations.   They make quick set ups for temporary work camps that include sleeping, wash cars, office, kitchen, mess halls, etc.

Roughly 10x44, a sleeping unit with have four rooms, with an oil furnace cubby in the middle.  Two units are laid facing each other and a four, six, or eight-foot wide hallway built down the center.

Once the Trans Alaska Pipeline was completed in the late 1970s, these units were sold off and they are now scattered across Alaska.

They are usually quite humble, and this one is no exception.   It does, however, have a cubby with a toilet and sink, which makes it far superior to any ATCO I’ve ever been in.    The shower is across the hall. 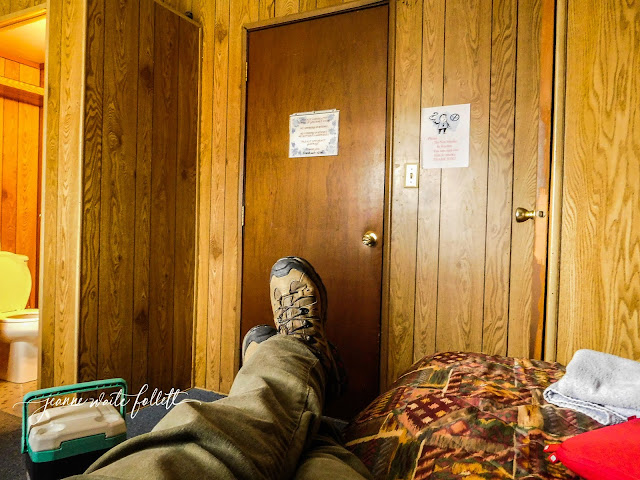 The first thing we scope out is an outlet for charging camera batteries.   Not until I required use of the bathroom did I find an outlet—little more than a foot off the floor under the sink.   You had to sit down to see it. 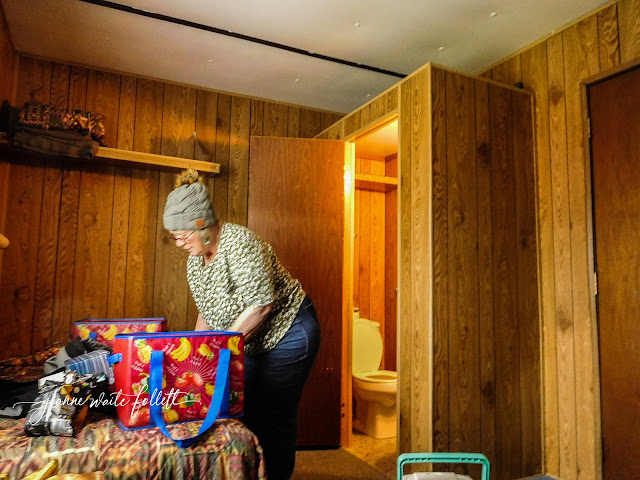