The 2nd Fur and Feathers Journals, Ch. 6: In which we mind our bear manners and reap the results, Part One

Over the past half century, the Coastal brown bears that inhabit certain places on the western shores of Cook Inlet have somehow reached an accord with humans, one that allows predators and prey to coexist in a tenuous peace.   Of all the places to experience this habituation phenomenon, Silver Salmon Creek is perhaps the best.

Farther south on the Alaska Peninsula, groups of spectators and photographers stand on a wooden platform at Brooks River falls in Katmai National Park and Preserve to watch dozens of huge bears stand in the rushing water and snatch salmon out of mid-air as they try to leap over the falls to get to their spawning grounds. While the bears can fish 24 hours a day, the humans have a time limit for their time on the platform.

At McNeil State Wild Game refuge, entrance is by lottery to limit the number of people watching bears fish.   Seventy-four brown bears were seen in one day at the river.

Silver Salmon Creek is farther north, in Lake Clark National Park, established in 1980.  Since then, generations of Coastal brown bears have become habituated to humans.  It’s taken time, but today’s bears don’t view humans as a source of food or harm, as long as the humans mind their “bear manners.”

Bear manners come very much into play one morning while we wait for the high tide to recede.

We’re in the cabin getting ready for Rick to pick us up soon.   Suddenly someone says there’s a bear in the yard.   We scramble for cameras and go outside carefully and quietly.

A young sow has sent her two first season cubs up a tree near the cabin and she heads directly to our cabin where a skiff is stored under a second floor deck.   The others line up to watch her while I go back into the cabin to my bedroom window.

There she is, lying on the ground behind the skiff, not ten feet from my bedroom. 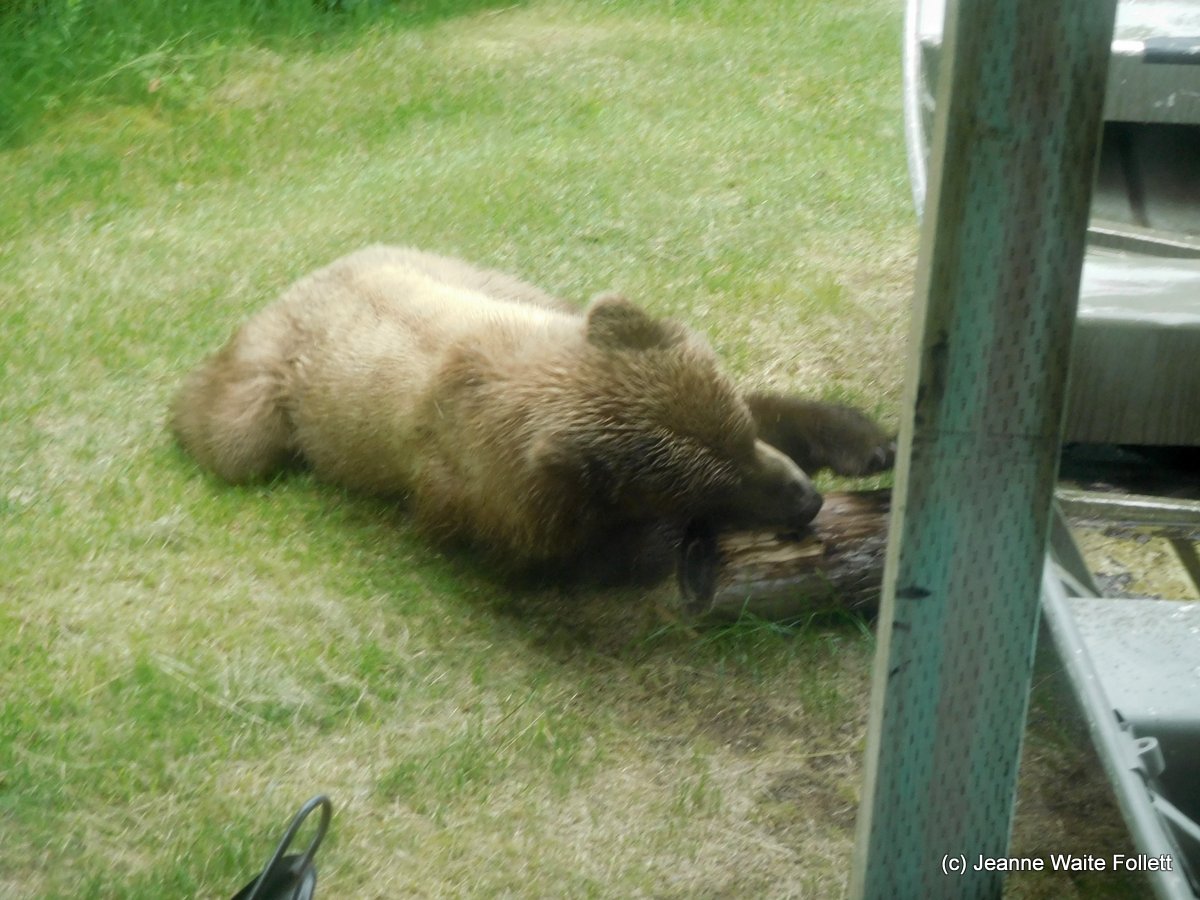 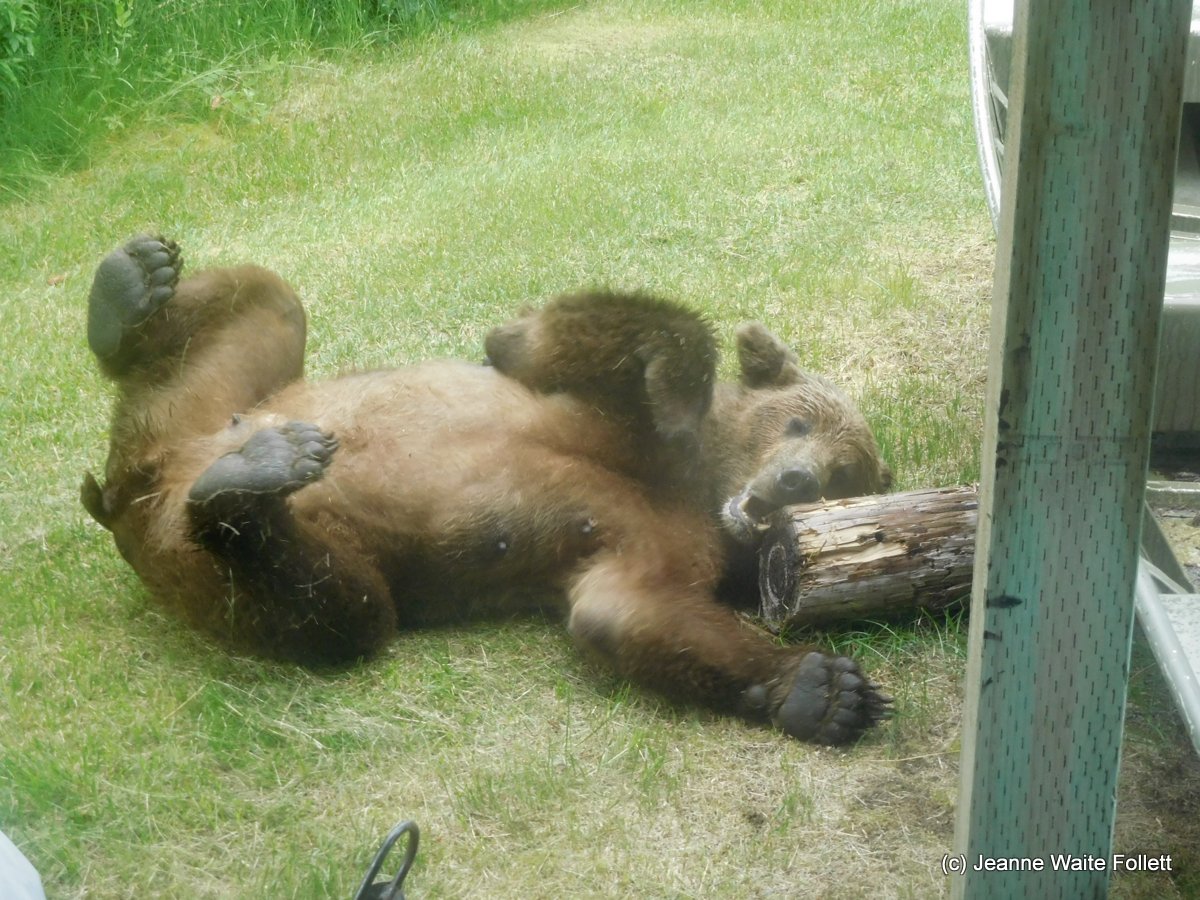 It seems even mama bears like to play.   She rolls around on her back, moving so quickly I can’t keep her in focus with my little Nikon Coolpix point and shoot. 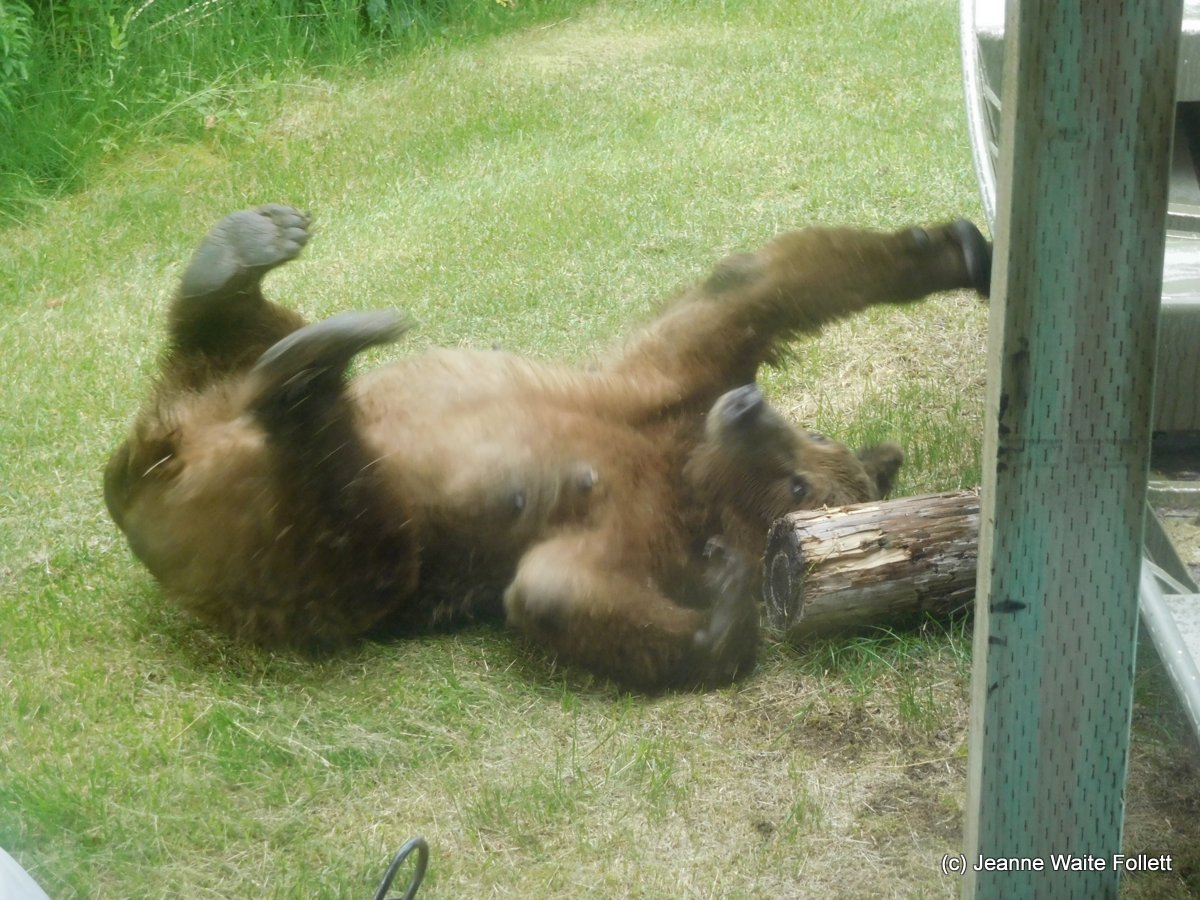 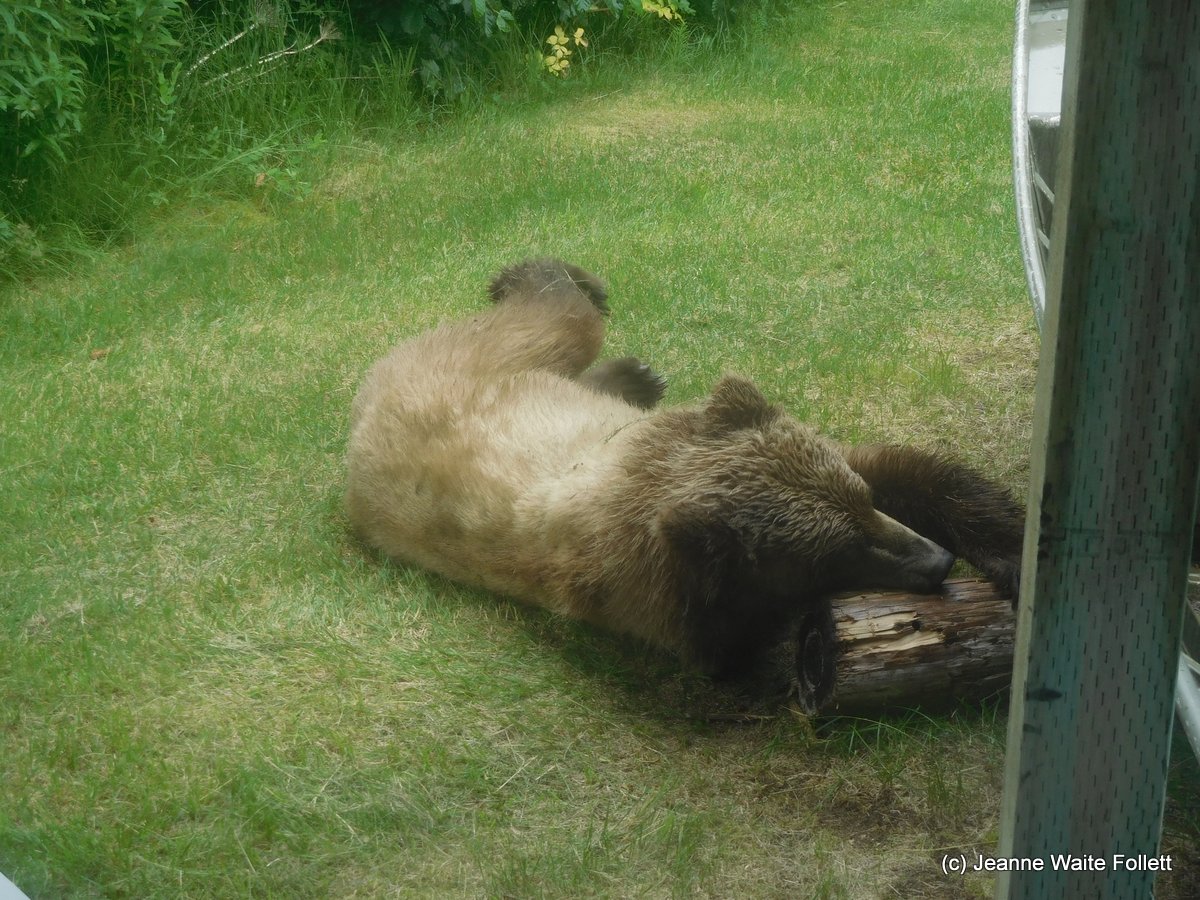 She rubs her face on it. 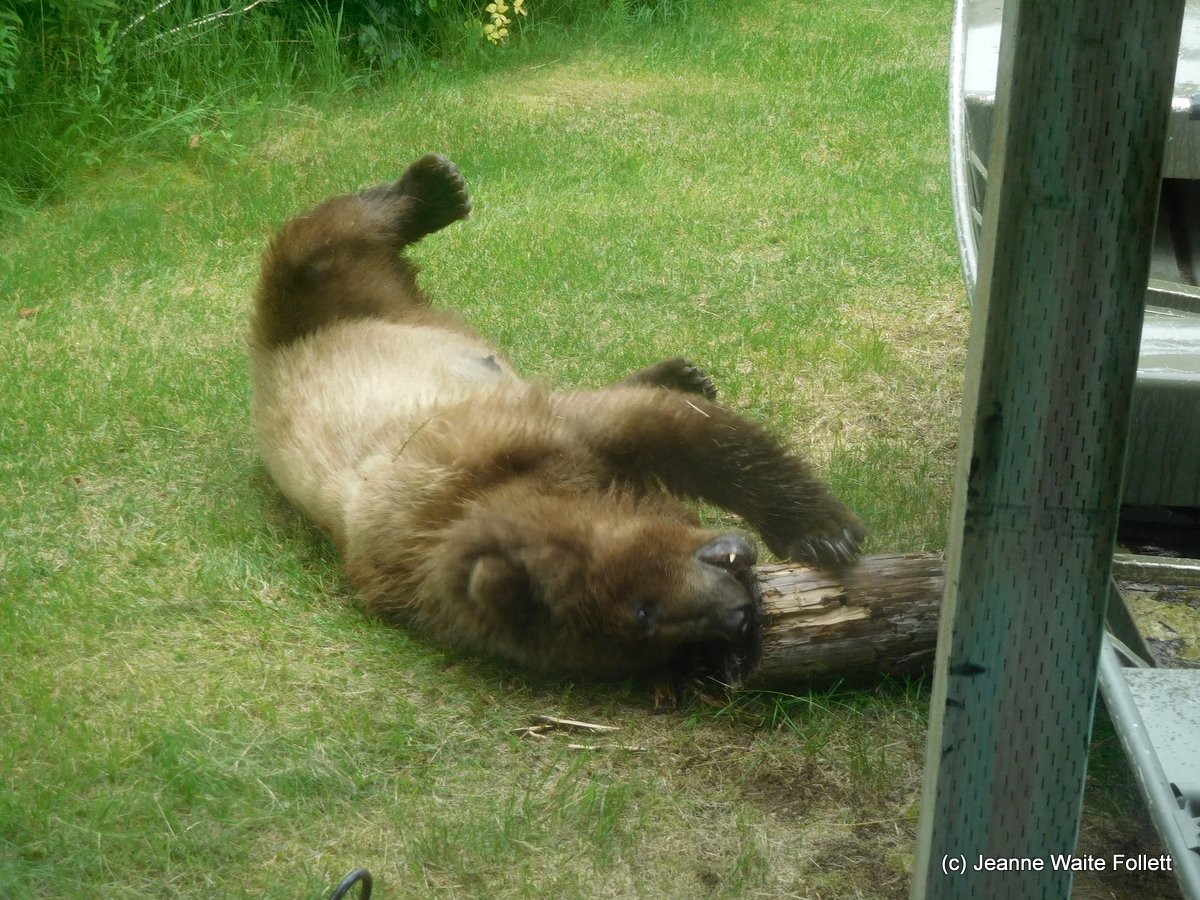 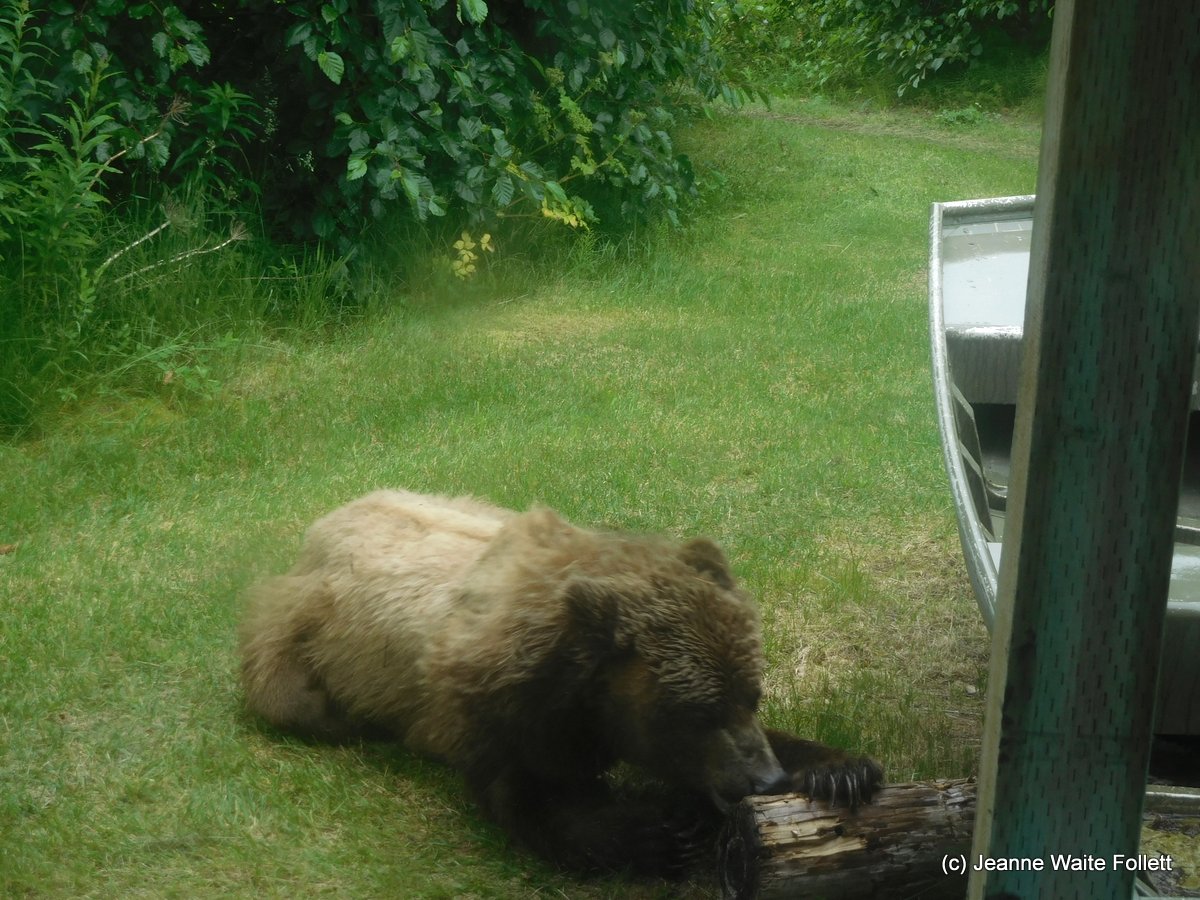 She sits up a couple times to see what the humans are doing.  They are all lined up with cameras and tripods and clicking away whenever she raises her head.  Staying in a quiet group and not invading the bear’s personal space are essential bear manners.   As I’m inside the cabin shooting through a salt water-misted pane of glass, I don’t think the bear is aware of me being so close.   If she is, she never glances my way. 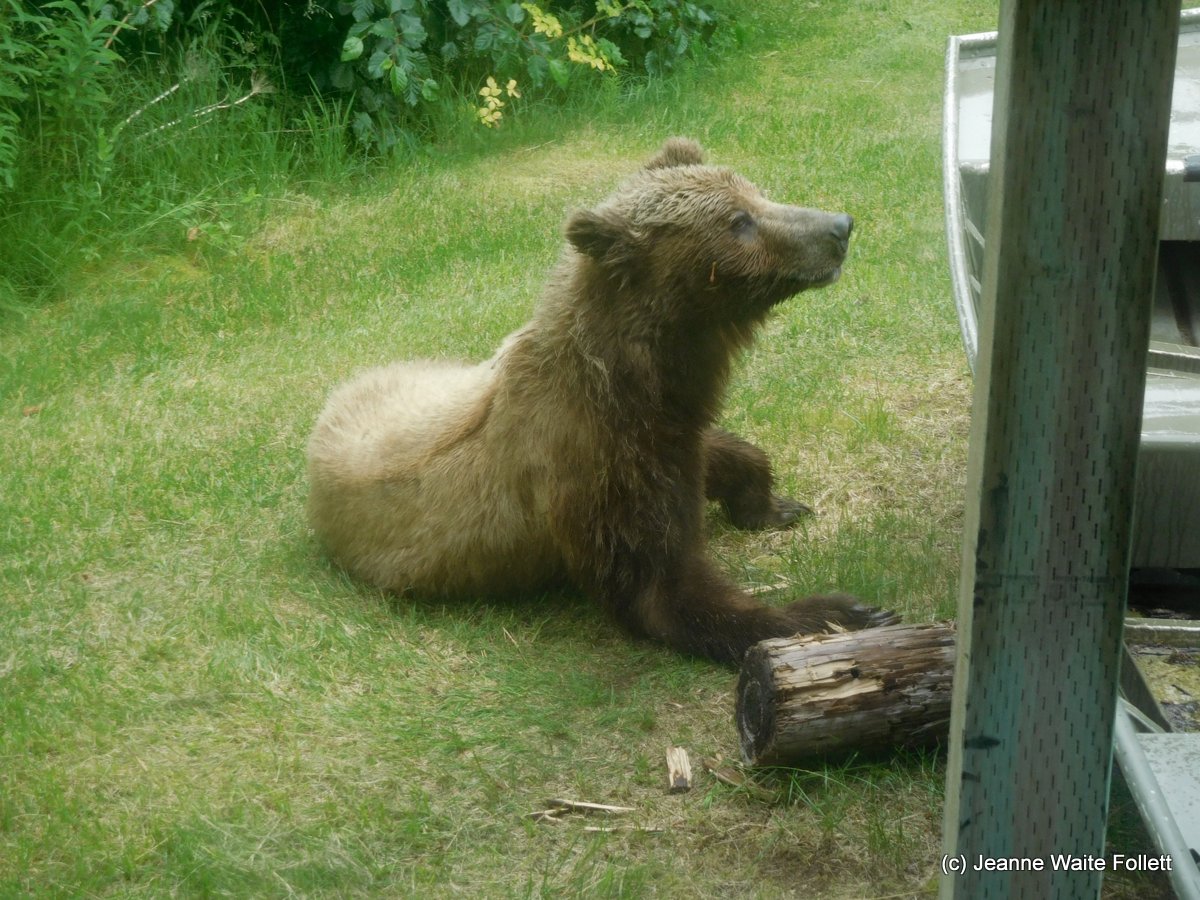 With her cubs in the tree, the sow ambles across the yard, crosses the still wet ATV trail, and goes into the salt marsh where the nutritious sedge grasses grow. 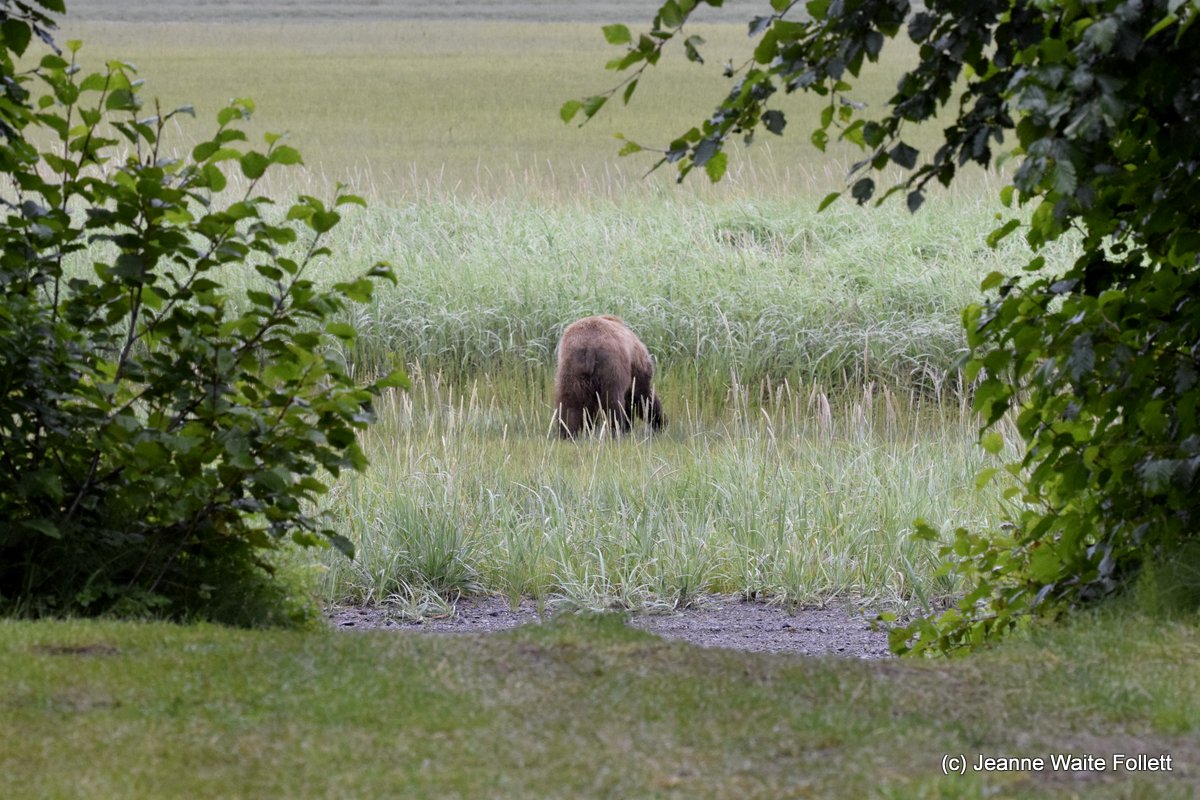 I expect her to browse, but she doesn’t.   She watches carefully, and apparently content that all is well with humans and cubs, she continues her brief “adult only” recess. 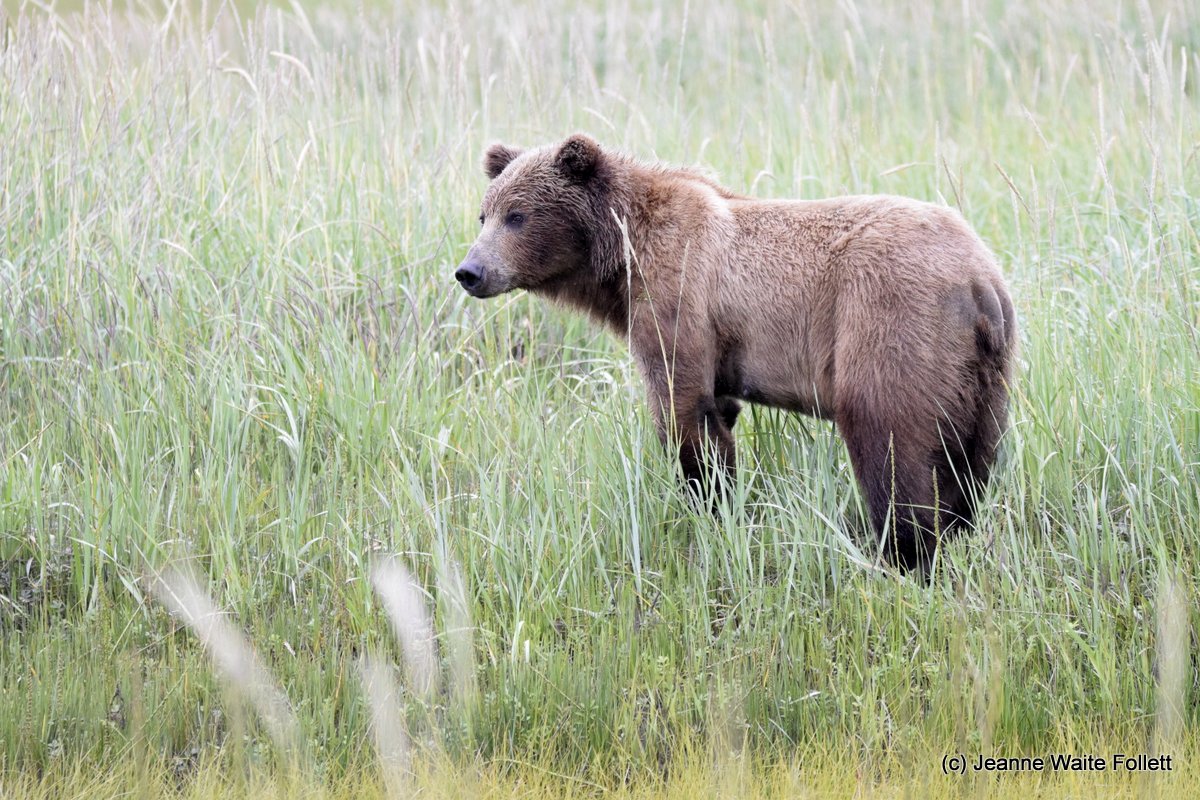 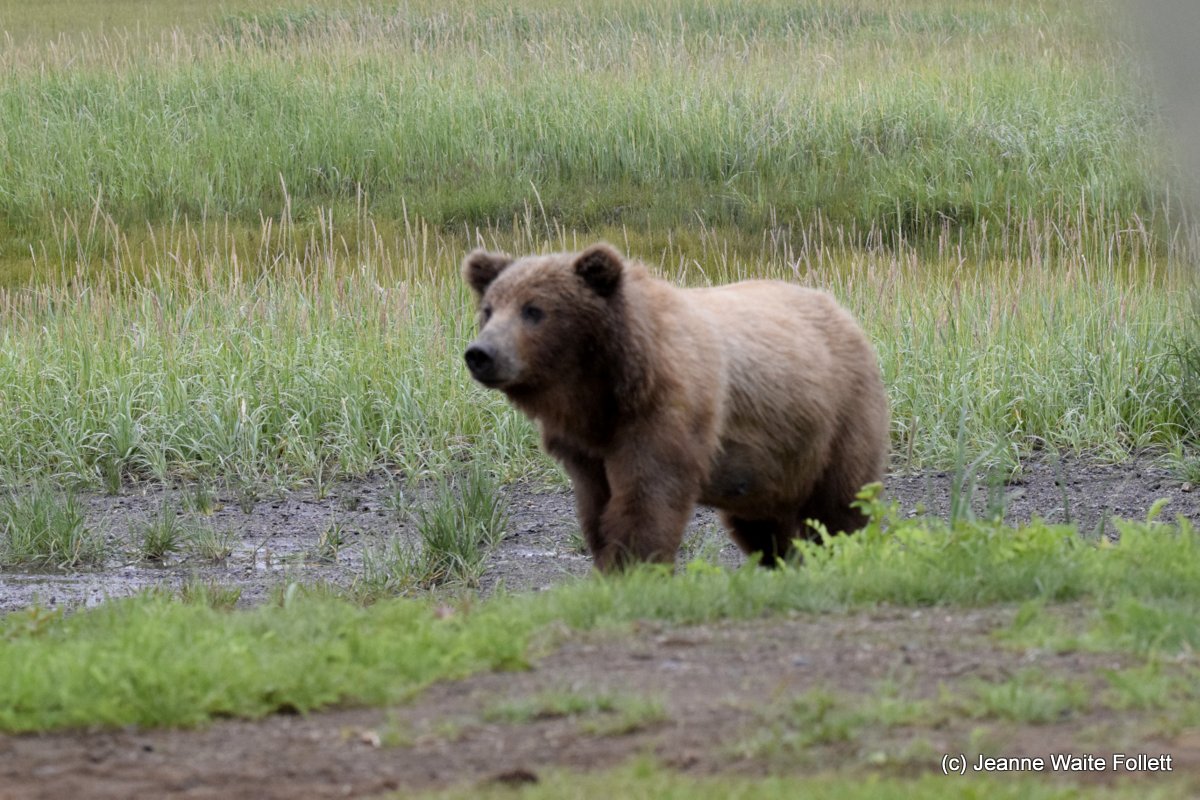 By this time, Rick has arrived and finds us all enthralled with the unfolding drama in our  yard.   He immediately takes charge and shows us where to stand to photograph the sow in the field.

I leave the group to return to the cabin on some now-forgotten errand.   I am heading back across the yard to rejoin the group when the sow walks right past Rick’s group and in my direction.

I back up against one of the airplanes, trying to make my mass appear much larger.   Then I hold my breath as she nears.

(To be continued....)
Posted by Gullible at 11:50 AM 2 comments:
Email ThisBlogThis!Share to TwitterShare to FacebookShare to Pinterest 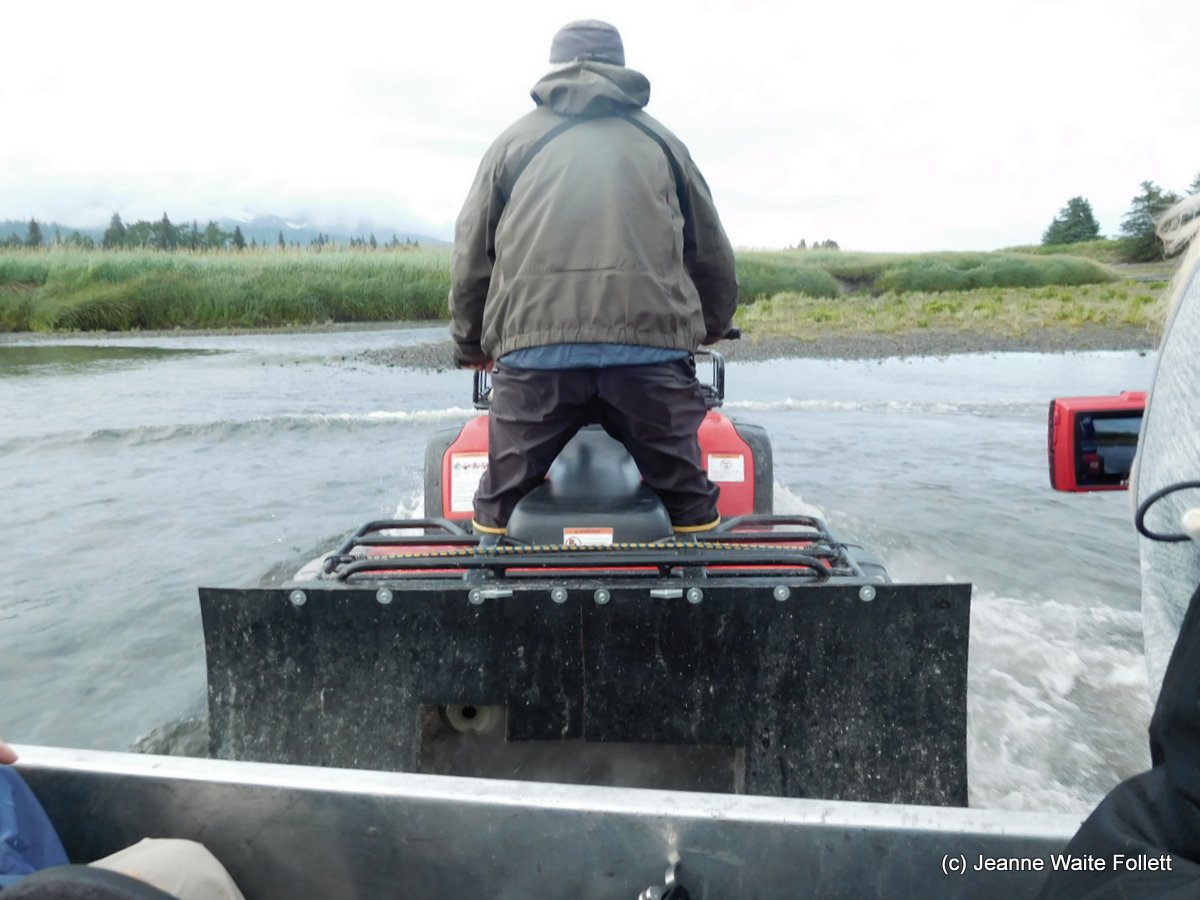 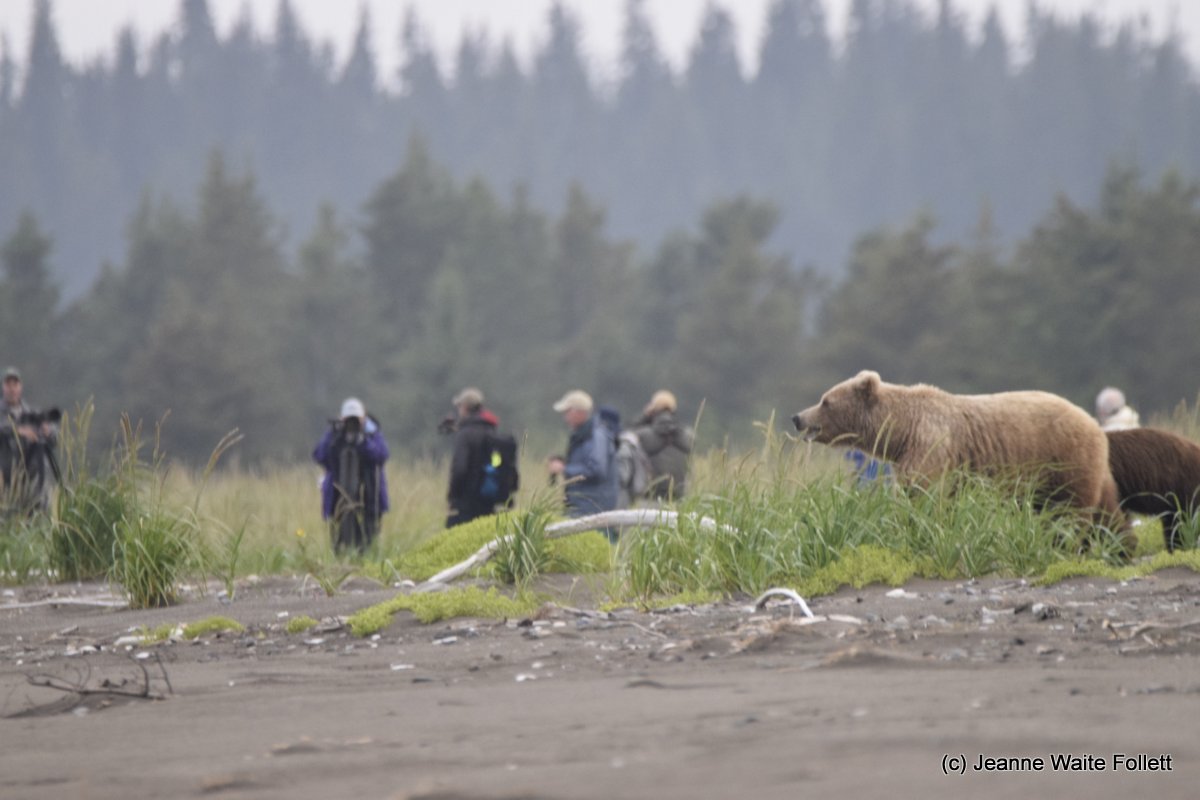 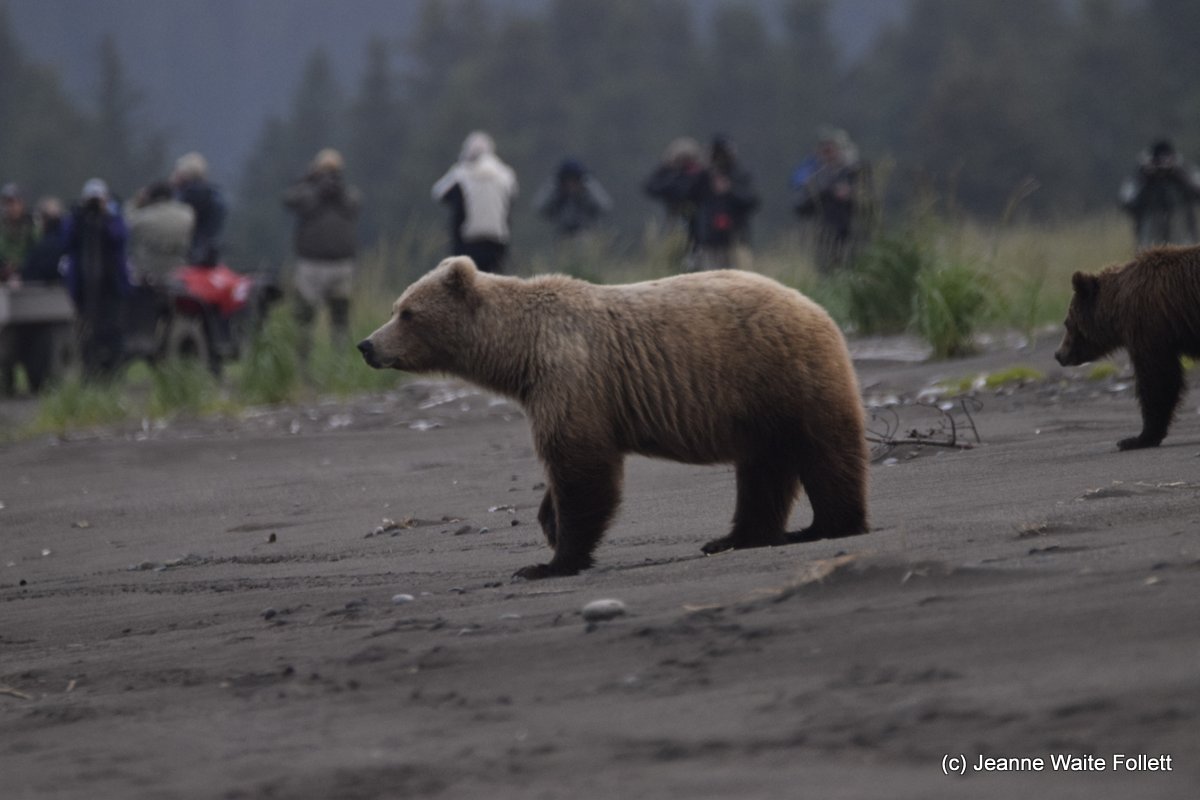 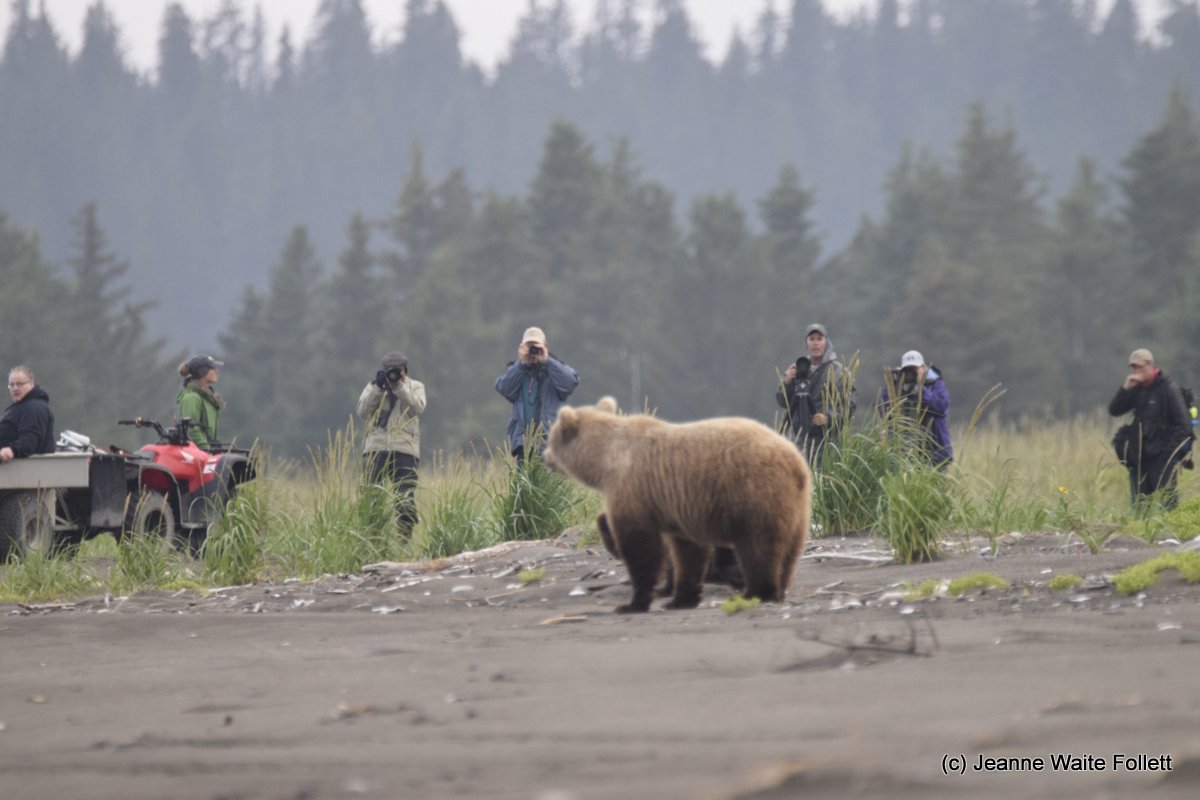 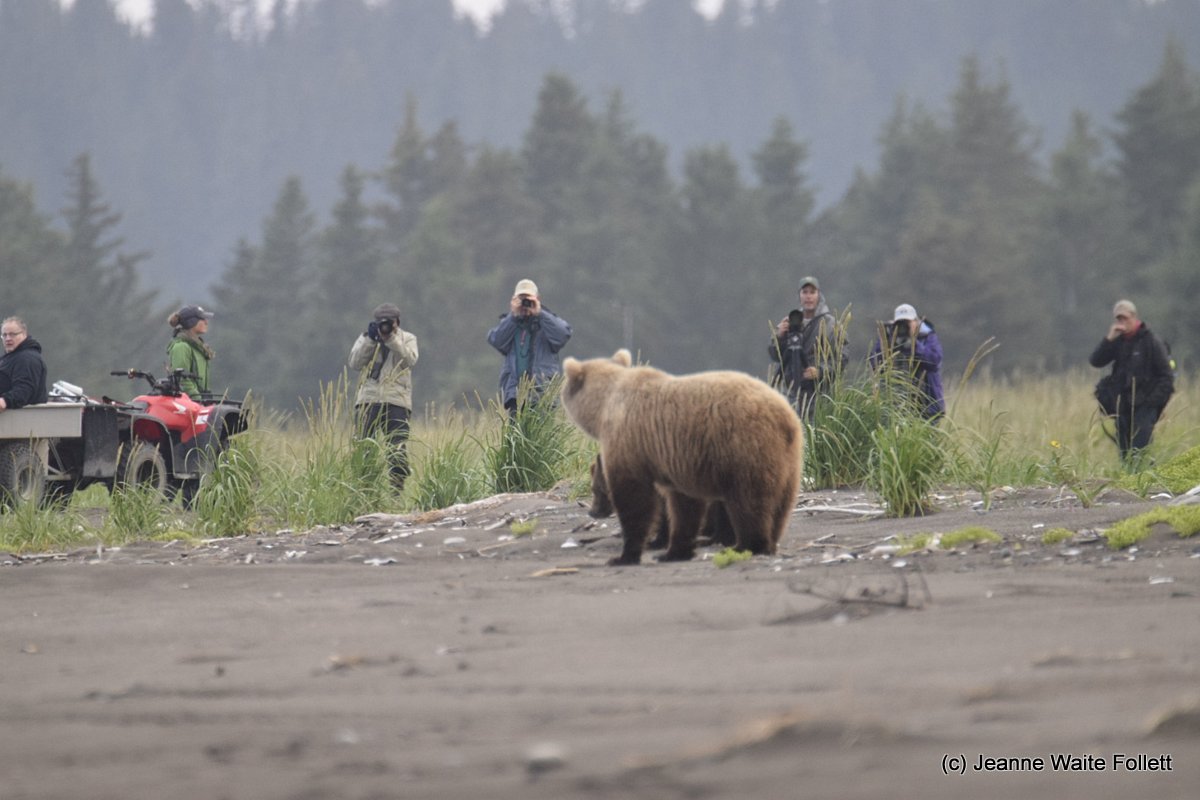 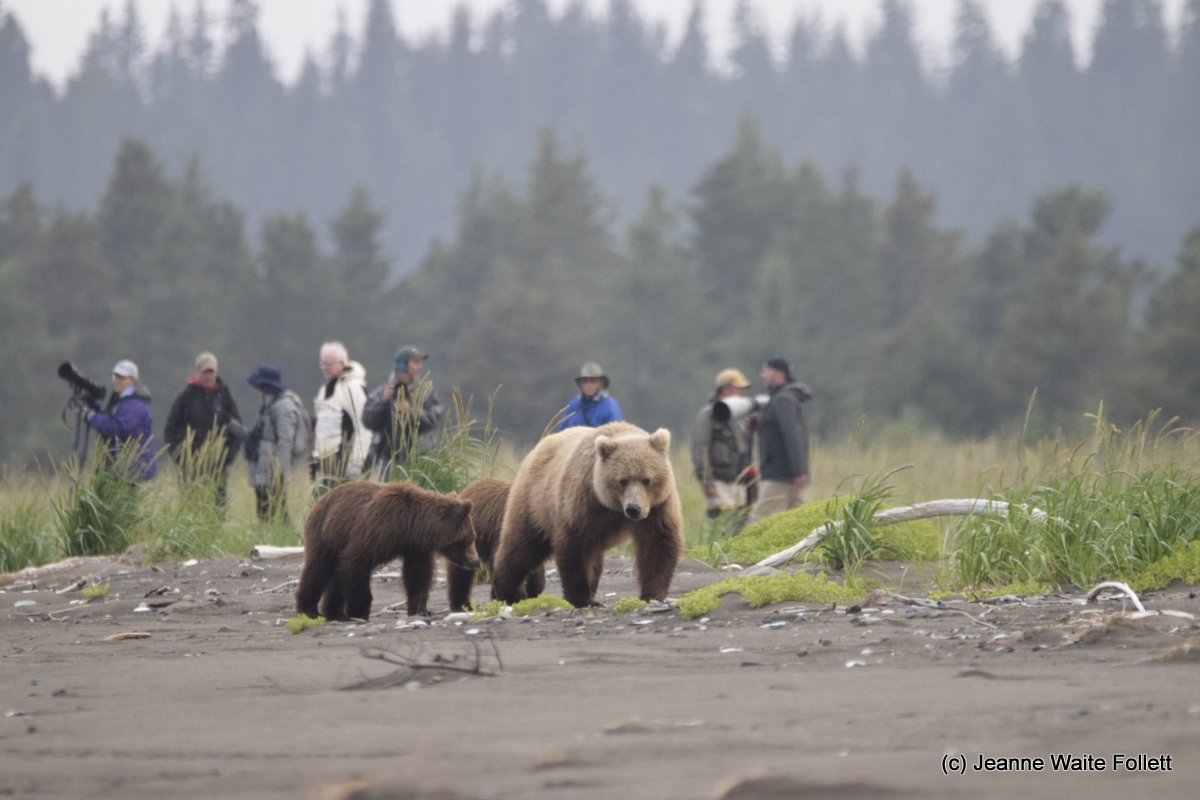 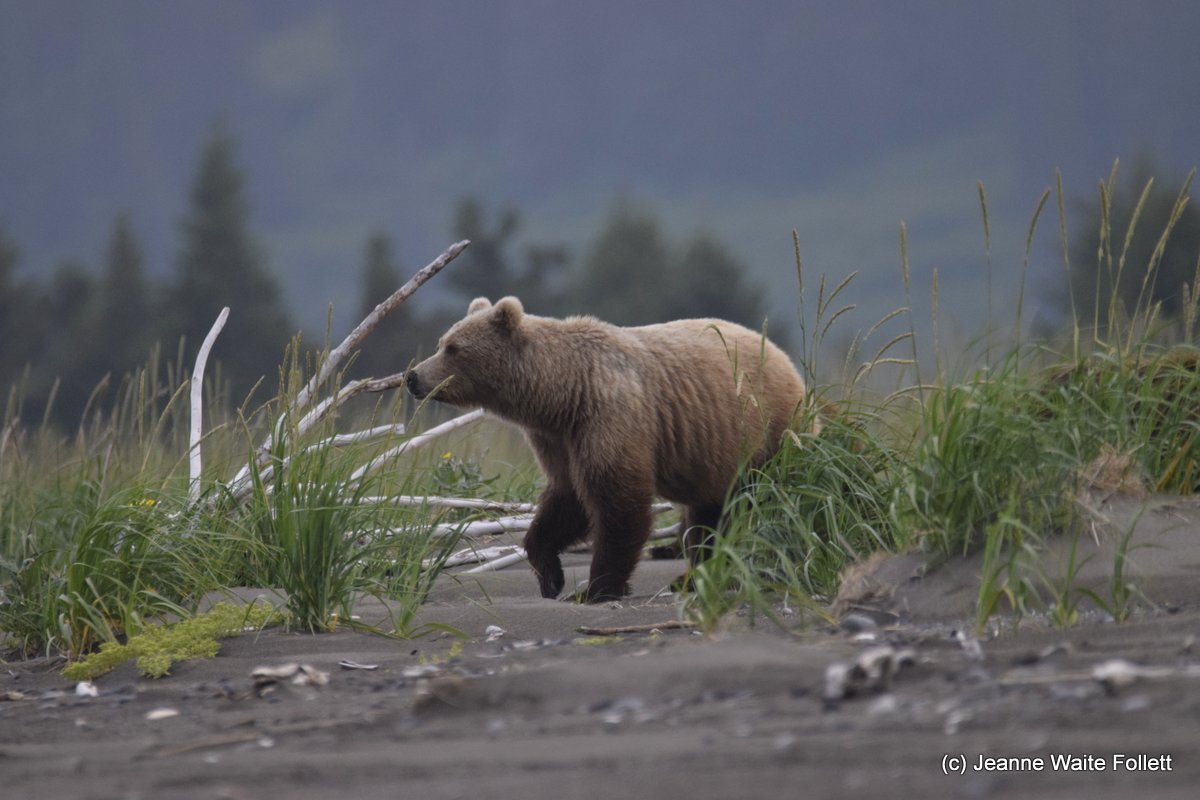 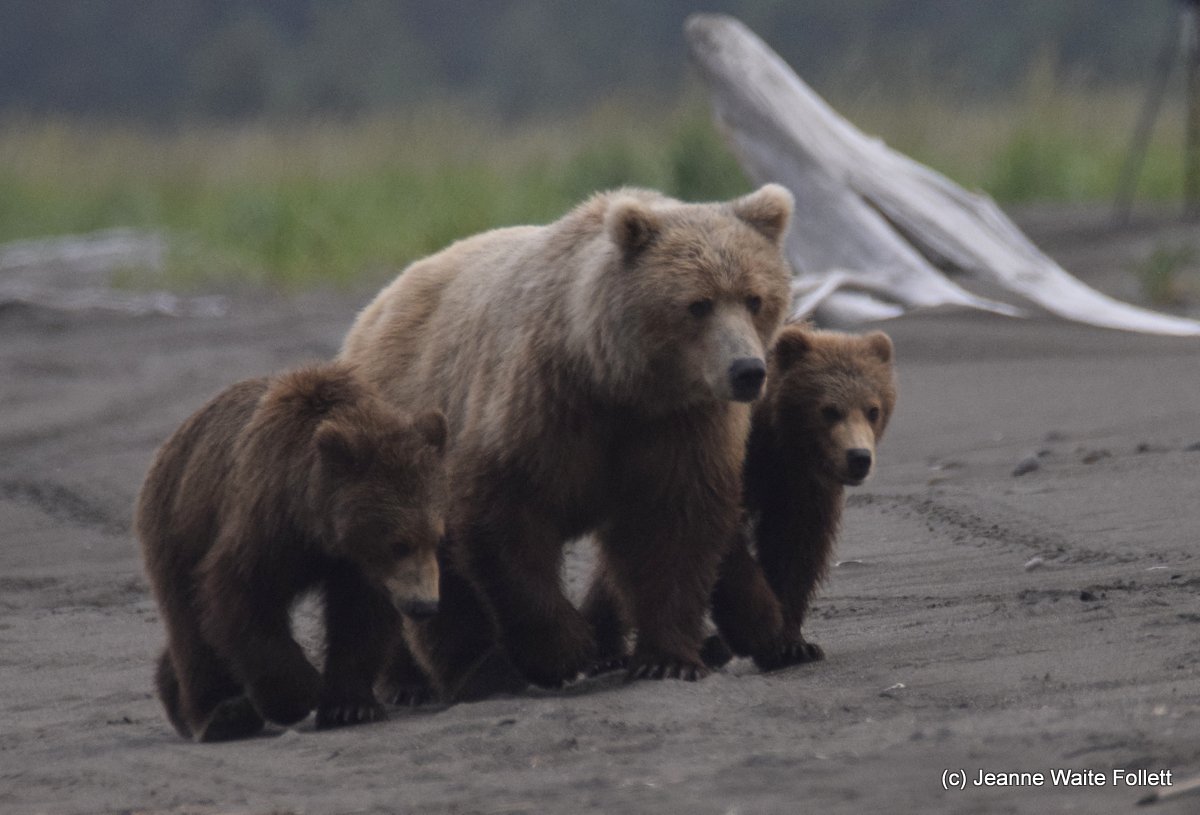 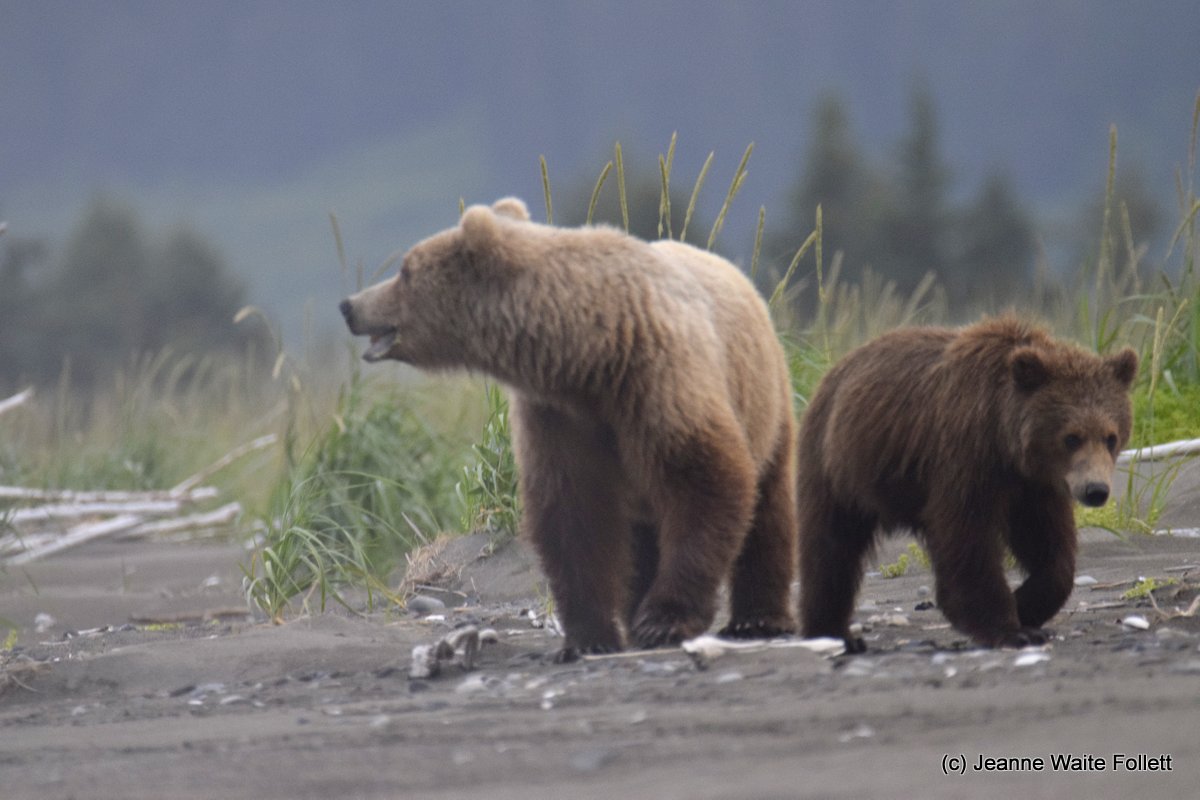 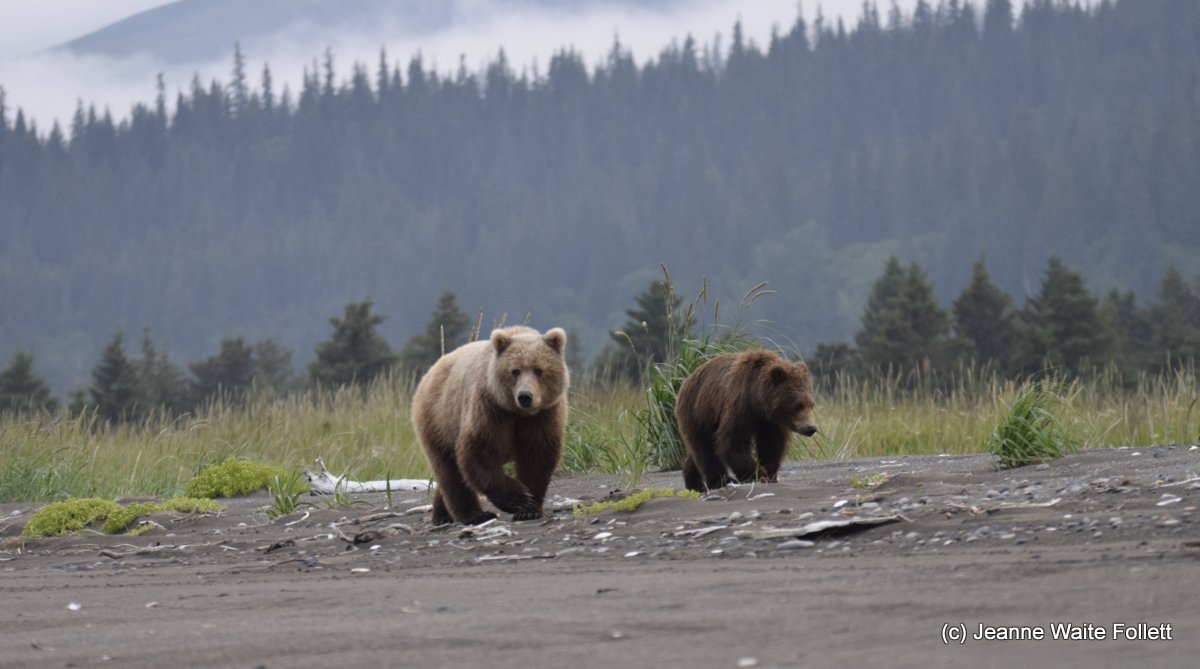 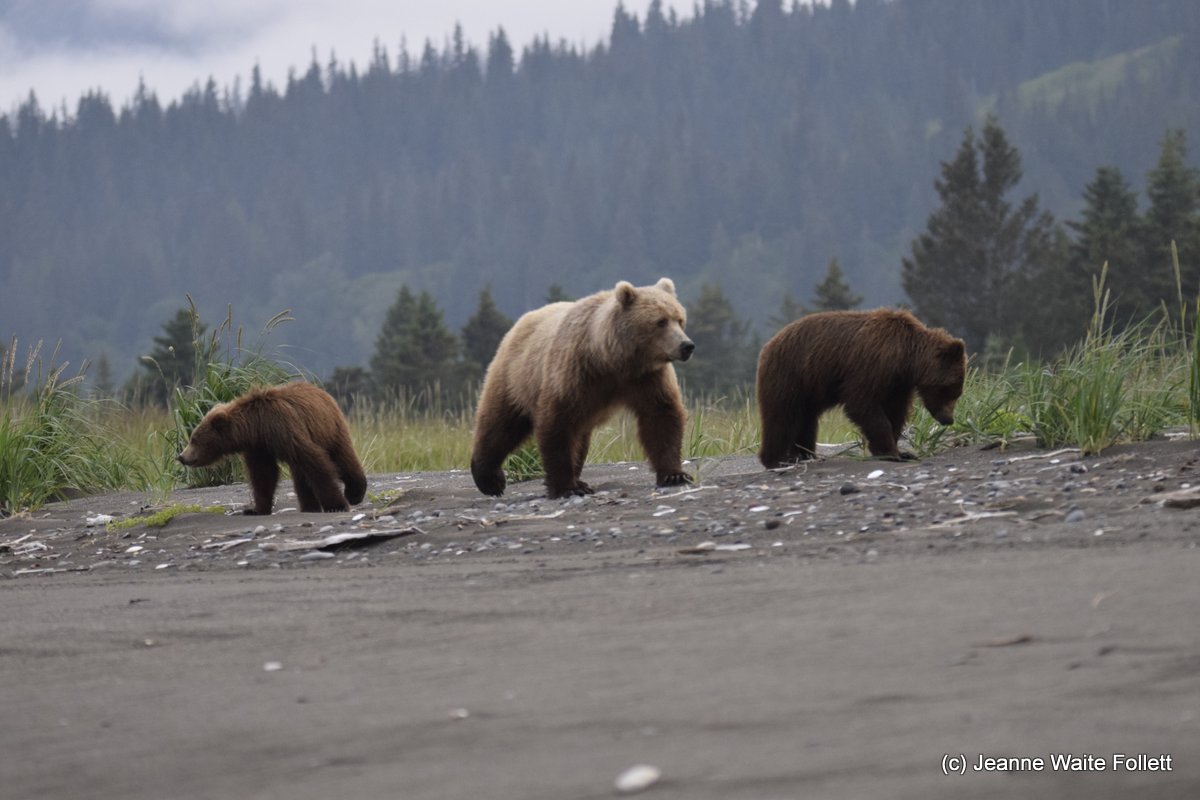 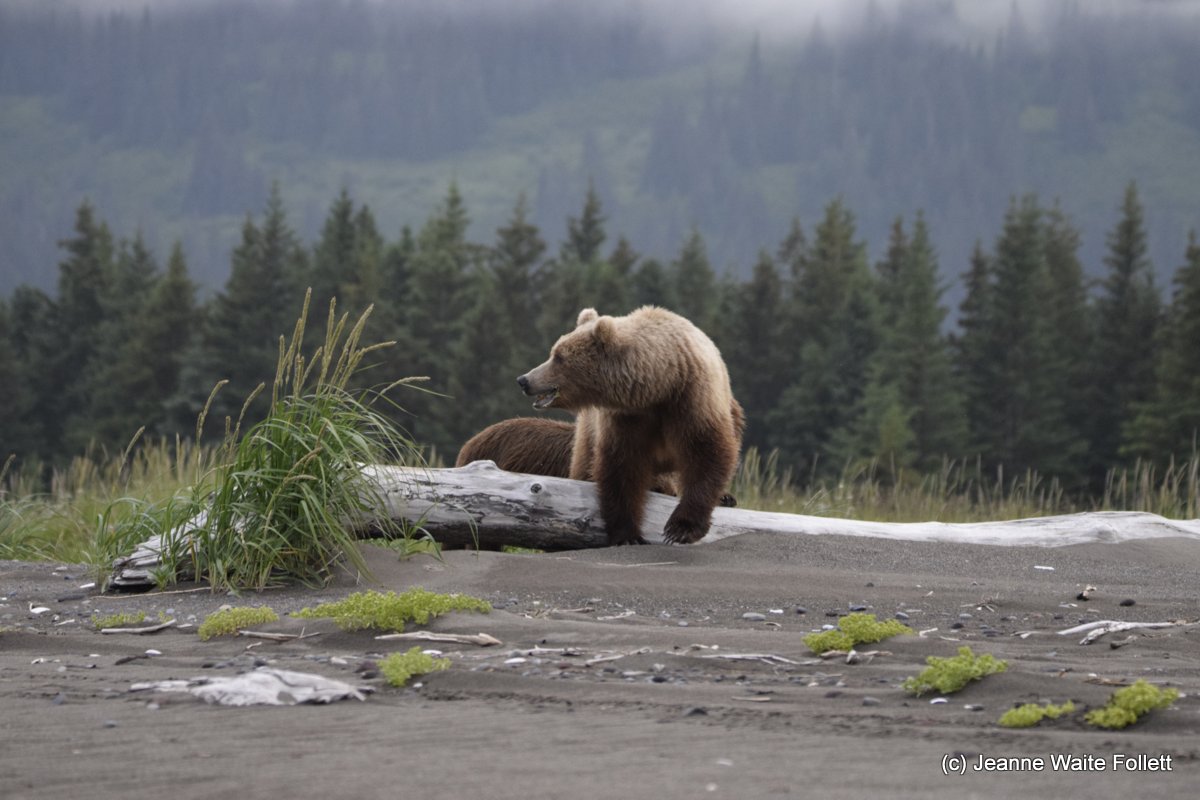 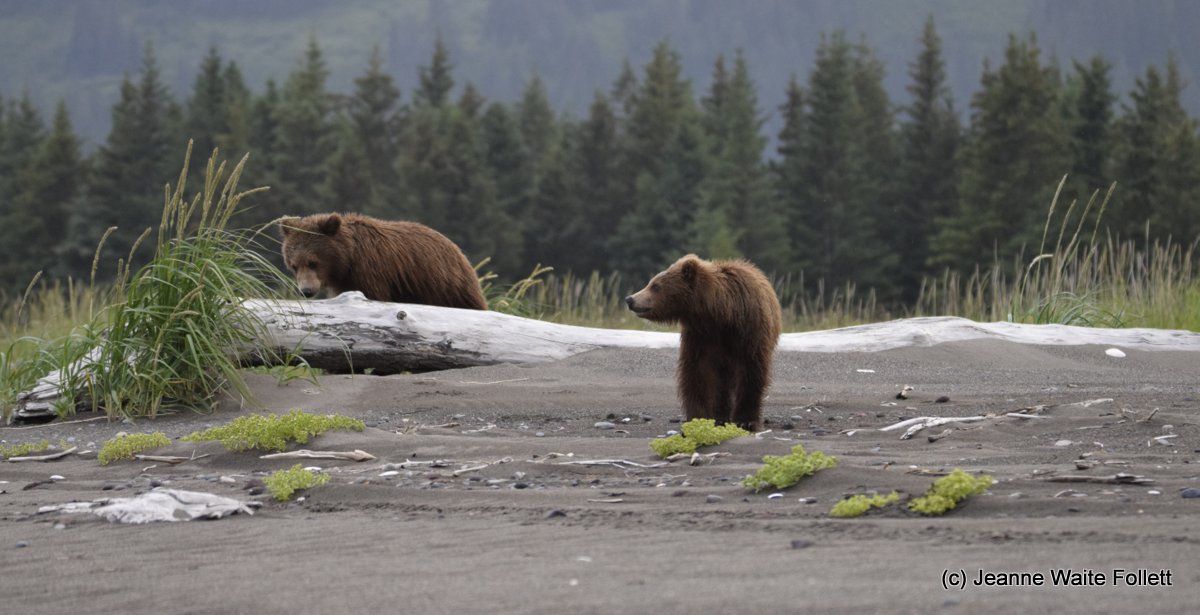 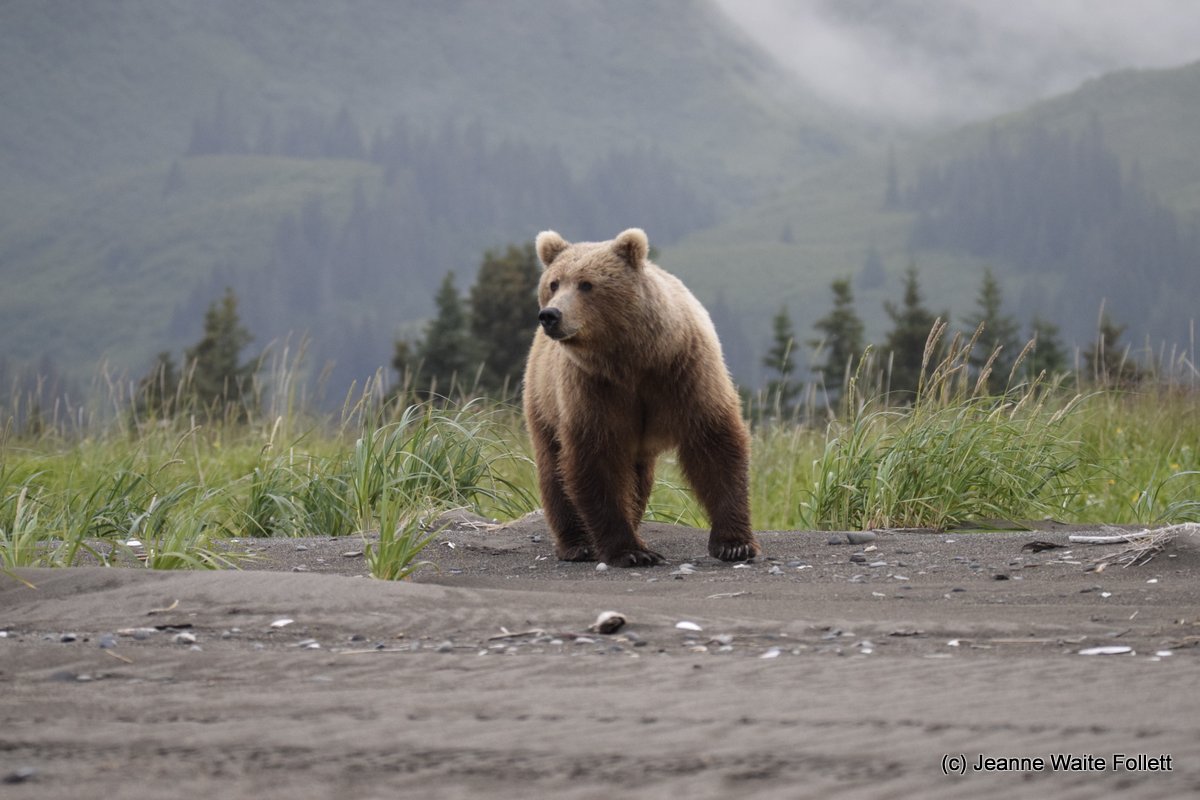 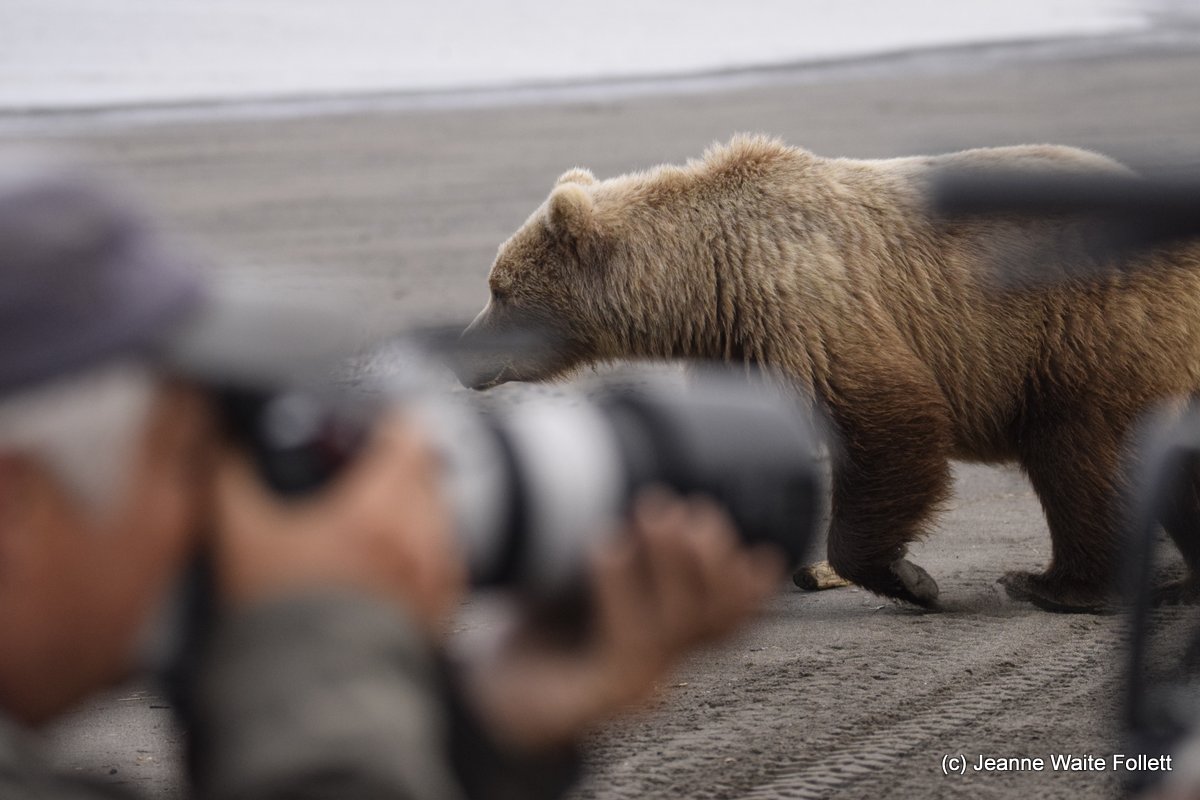 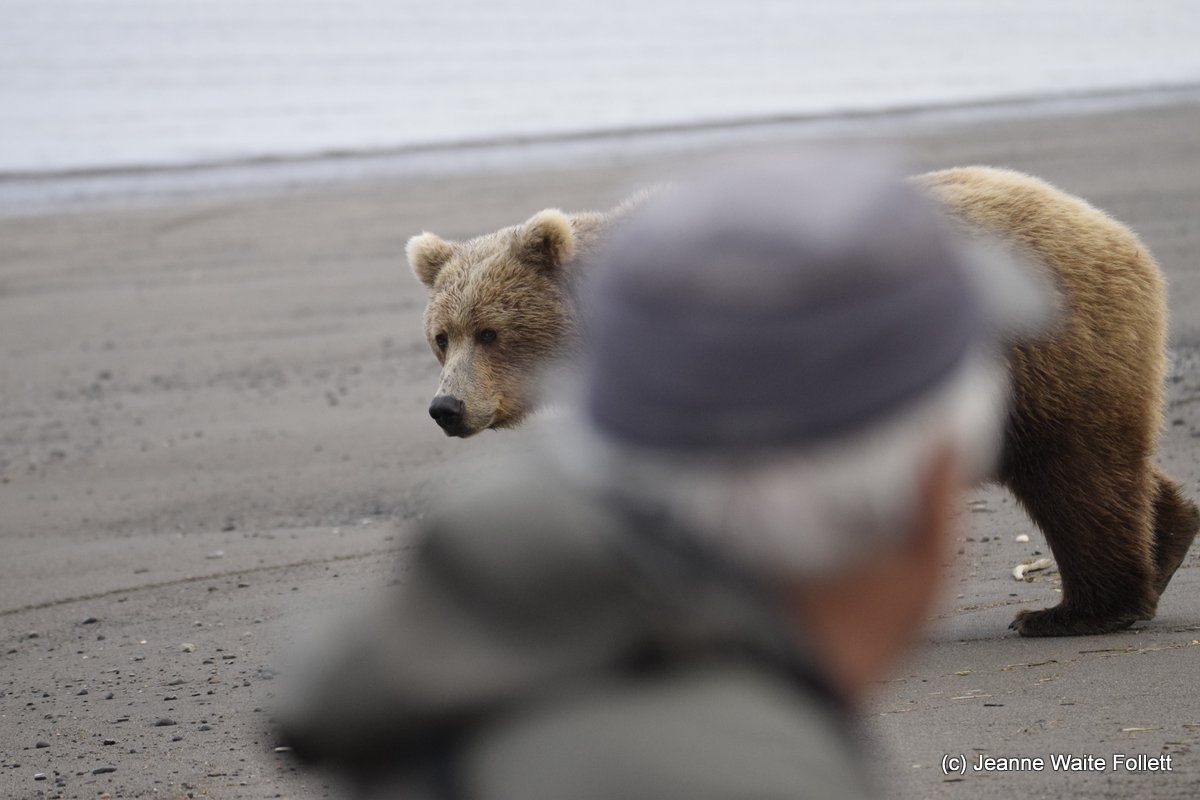 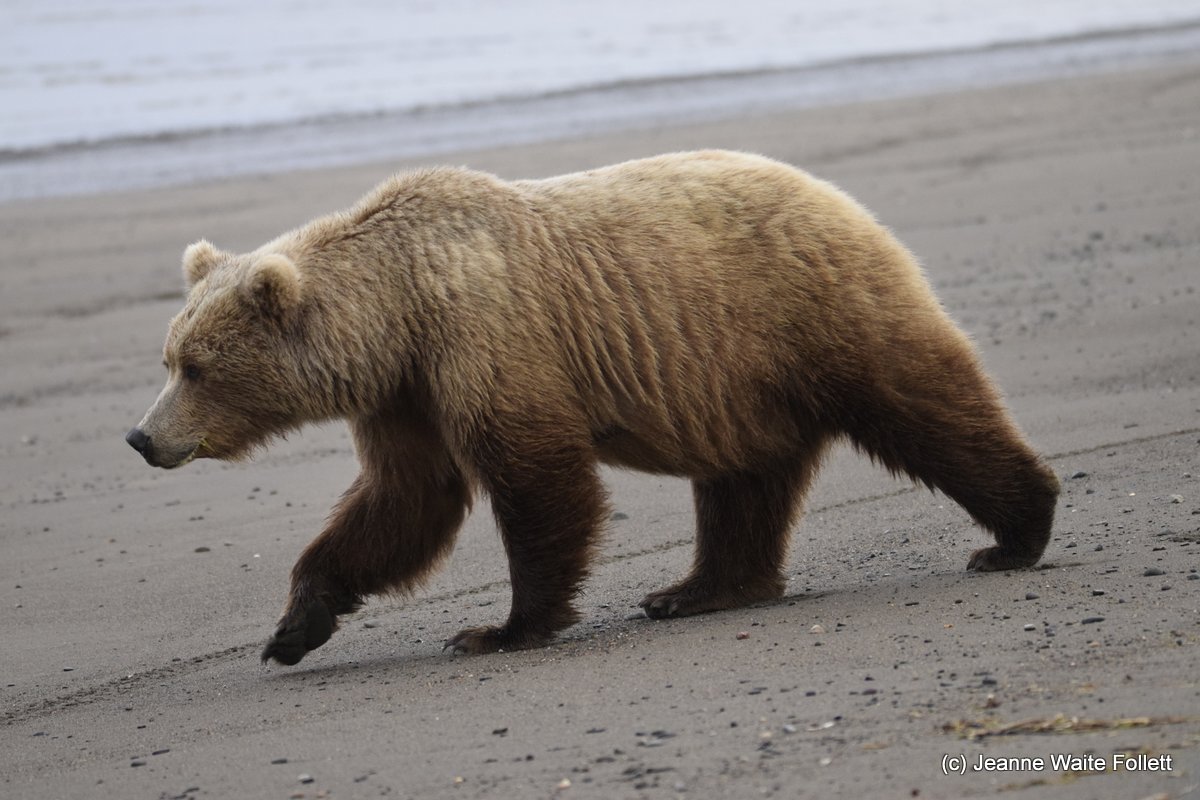 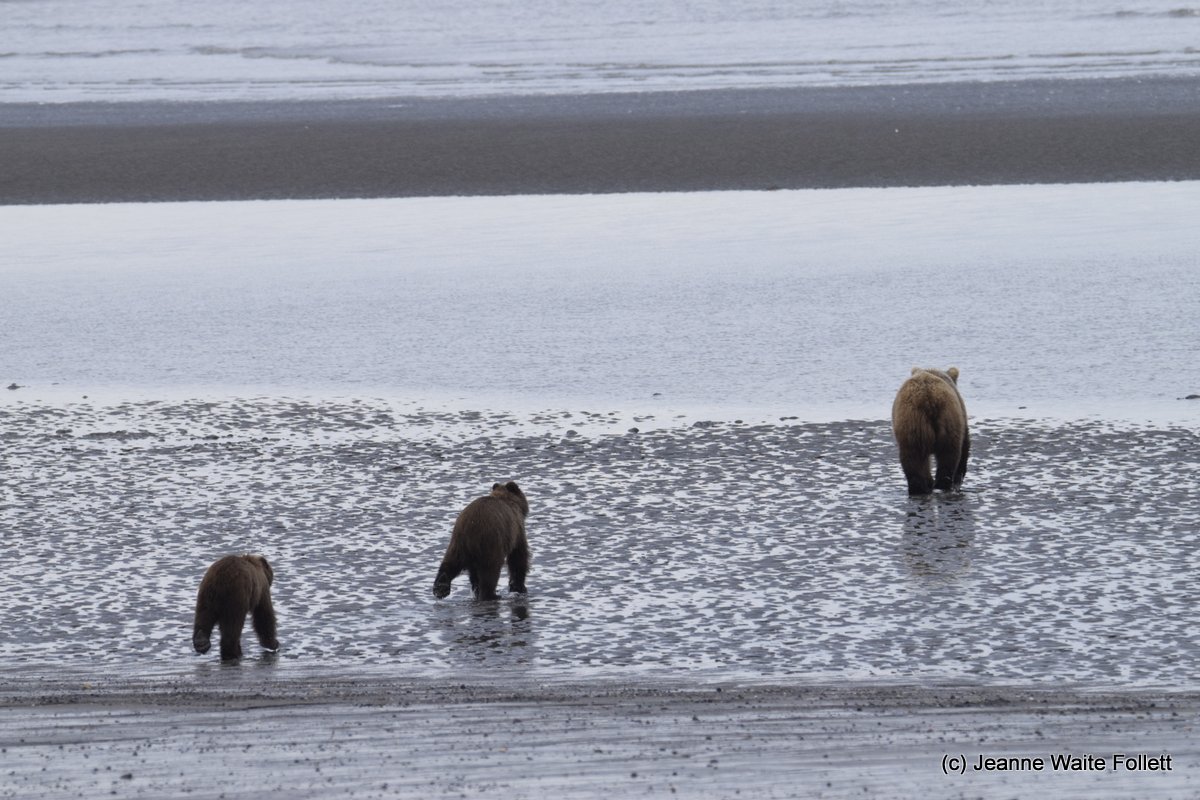