The 2nd Fur and Feathers Journals, Ch. 4: In which we peruse the ursine menu du jour

Chapter Four
In which we peruse the ursine menu du jour

Every time I lift the catch basket off my lawn mowing tractor, I estimate the weight of the grass clippings in it.   Depending on where I mow, I guess that the basket weighs between 20 and 30 lbs., just the amount of sedge grass the Coastal brown bears across Cook Inlet eat every day.

It’s an astonishing amount of veggies.

During our first excursion after arrival, Rick spots two cubs up in a spruce tree.  Their mother sidles into the grassy field in front of us.


She checks out the surrounding territory, looking left and right….. 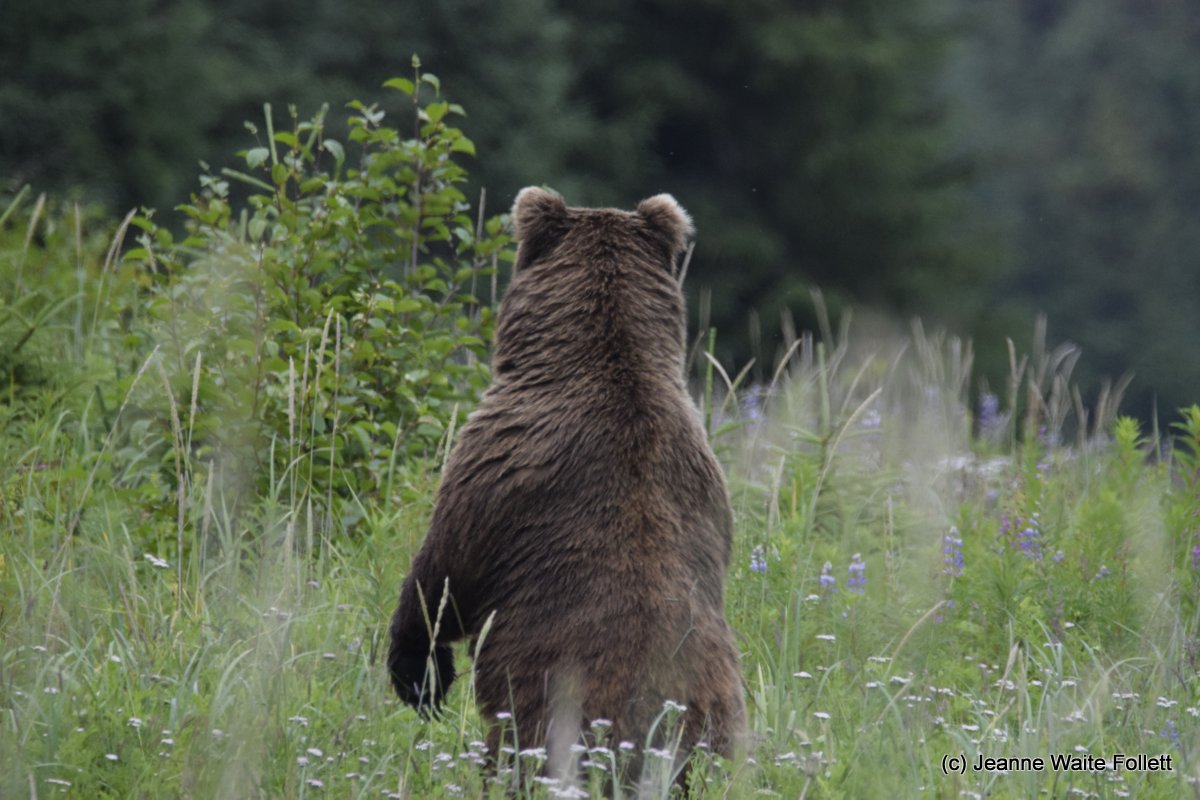 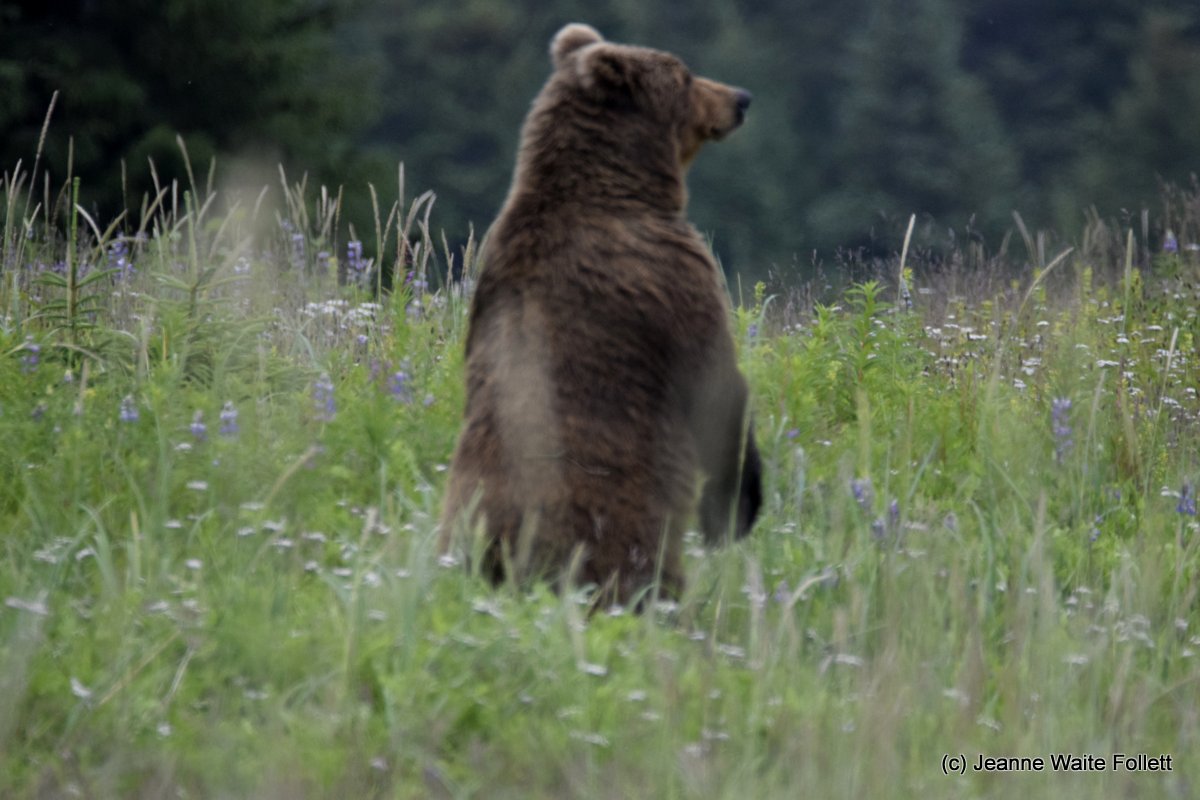 She checks us out and decides we aren’t a problem….. 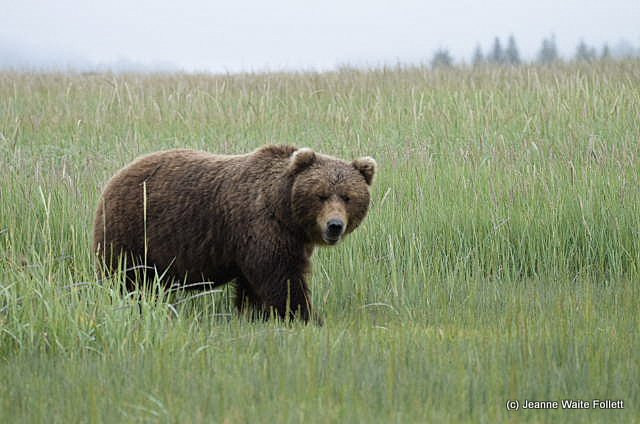 And starts munching on grass. 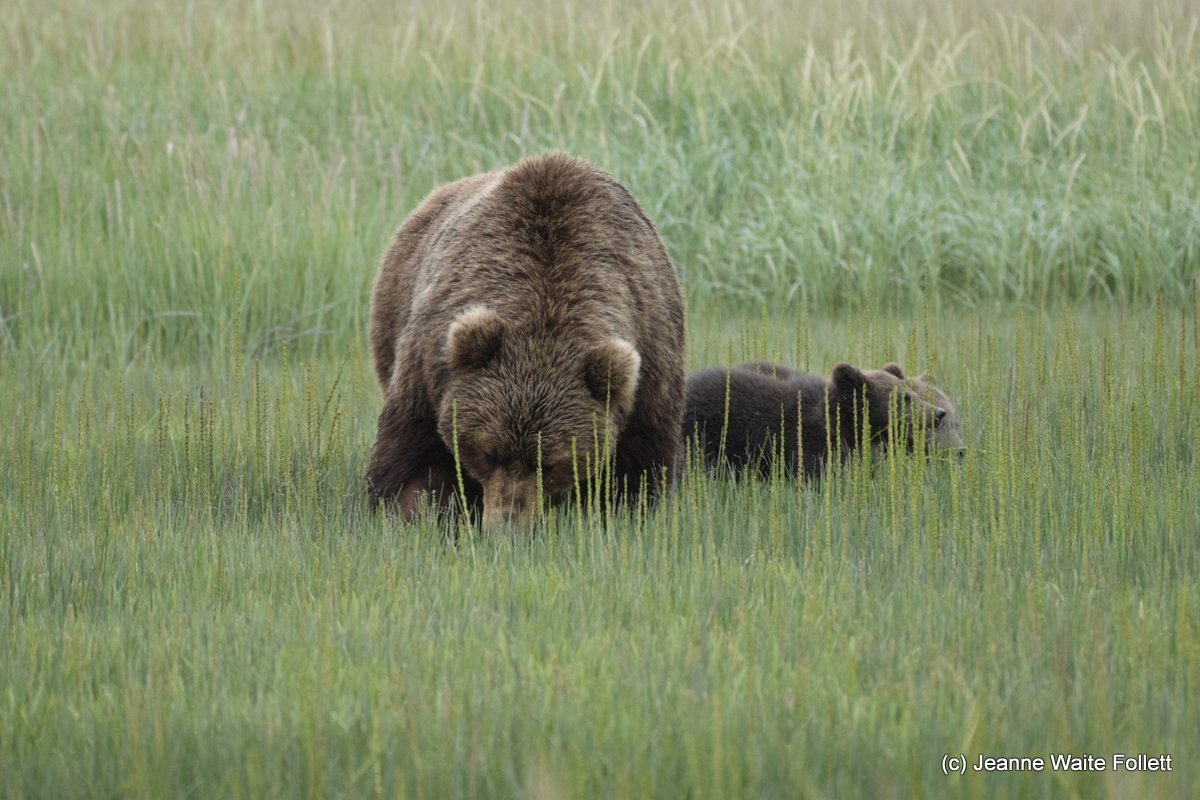 Soon she is joined by the cubs, who have no intention of eating.   They only want to play and chase each other. 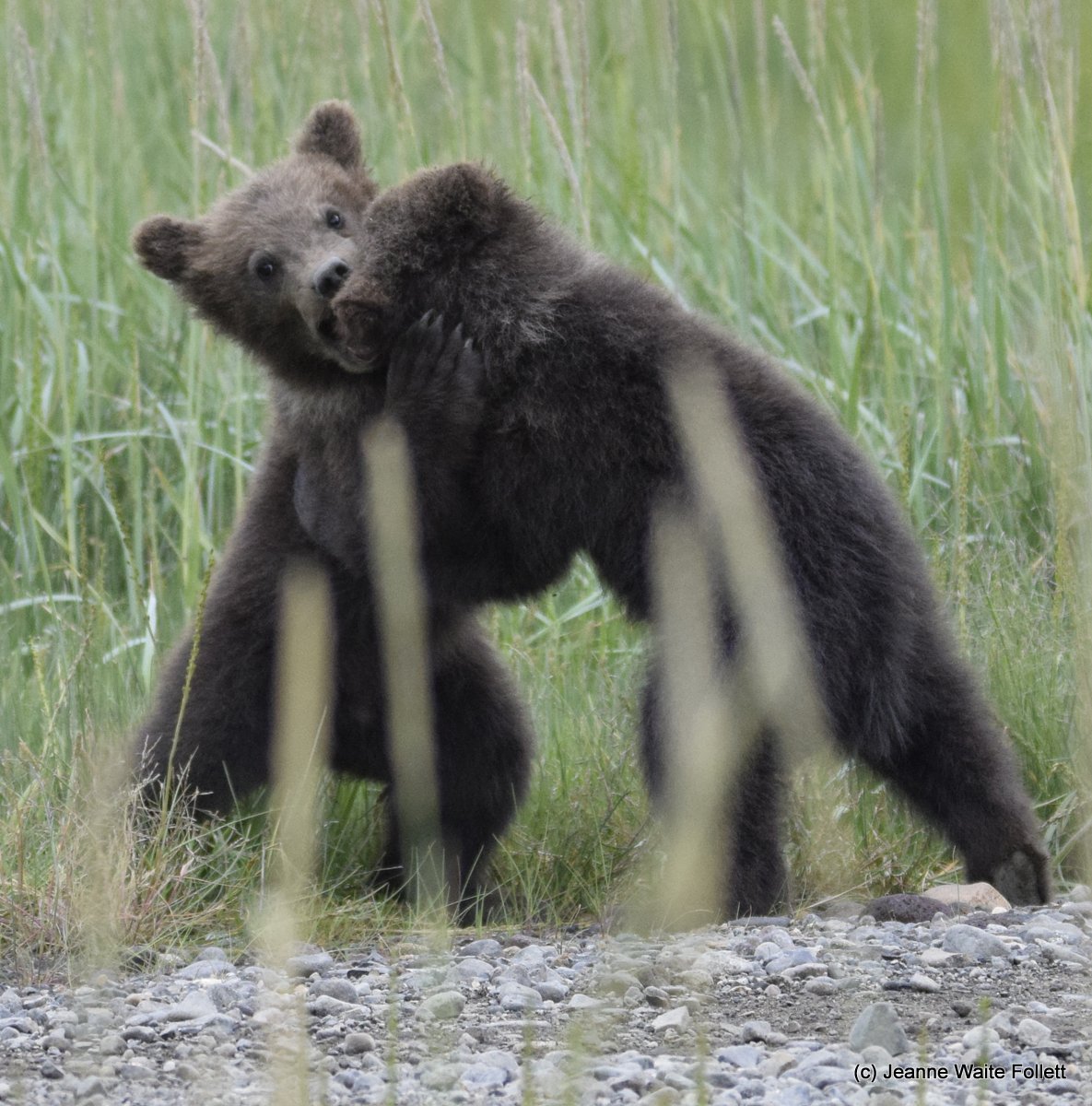 This is the first time I’ve used my new camera and I’m having a focus problem.   The auto-focus prefers to focus on grass rather than the bears.   I switch to manual focus, but that isn’t much better.   The rain and low light doesn’t help.

Some of the guides think this is a sow known variously as Looper or Old Sow.  Rick isn’t convinced, saying she doesn’t exhibit the same habits that Old Sow did with previous cubs.

She is a huge and beautiful dark-coated bear.

A couple days later, we come across a blonde sow with two second year cubs in the field near our cabin. 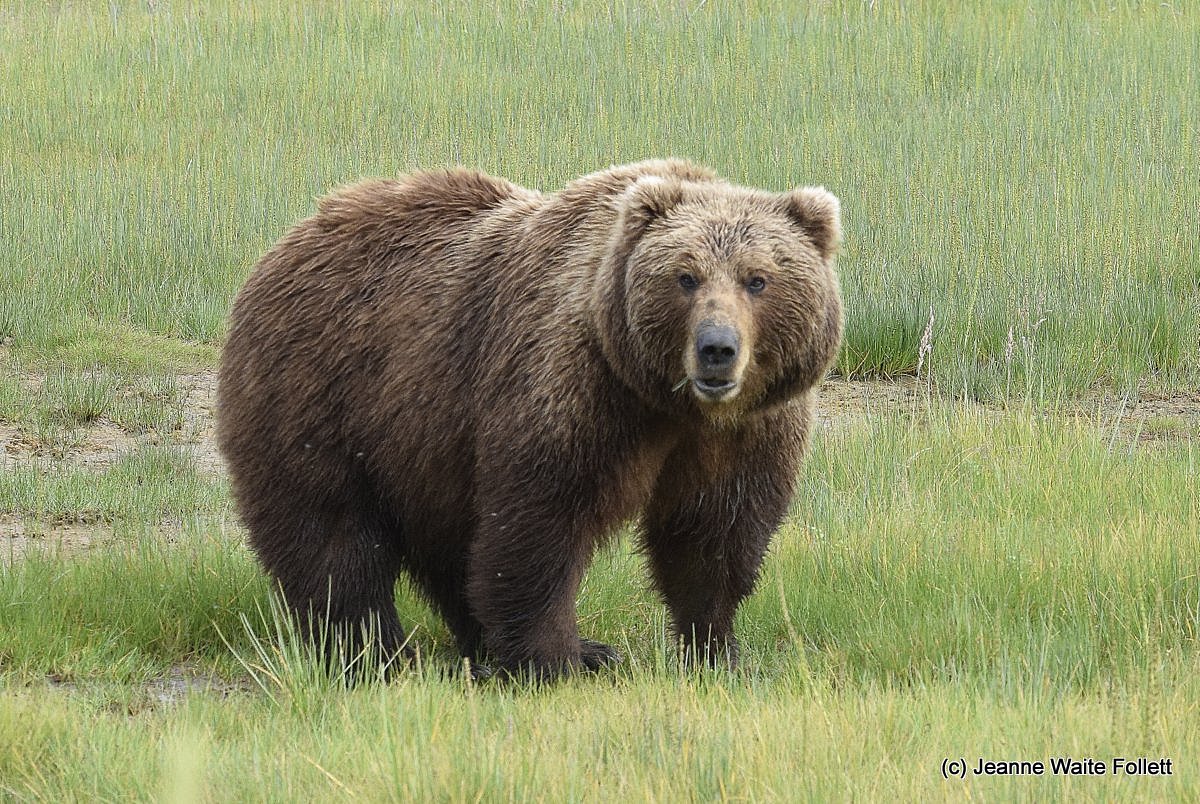 These cubs are a bit more sedate and occasionally join in the grass picnic. 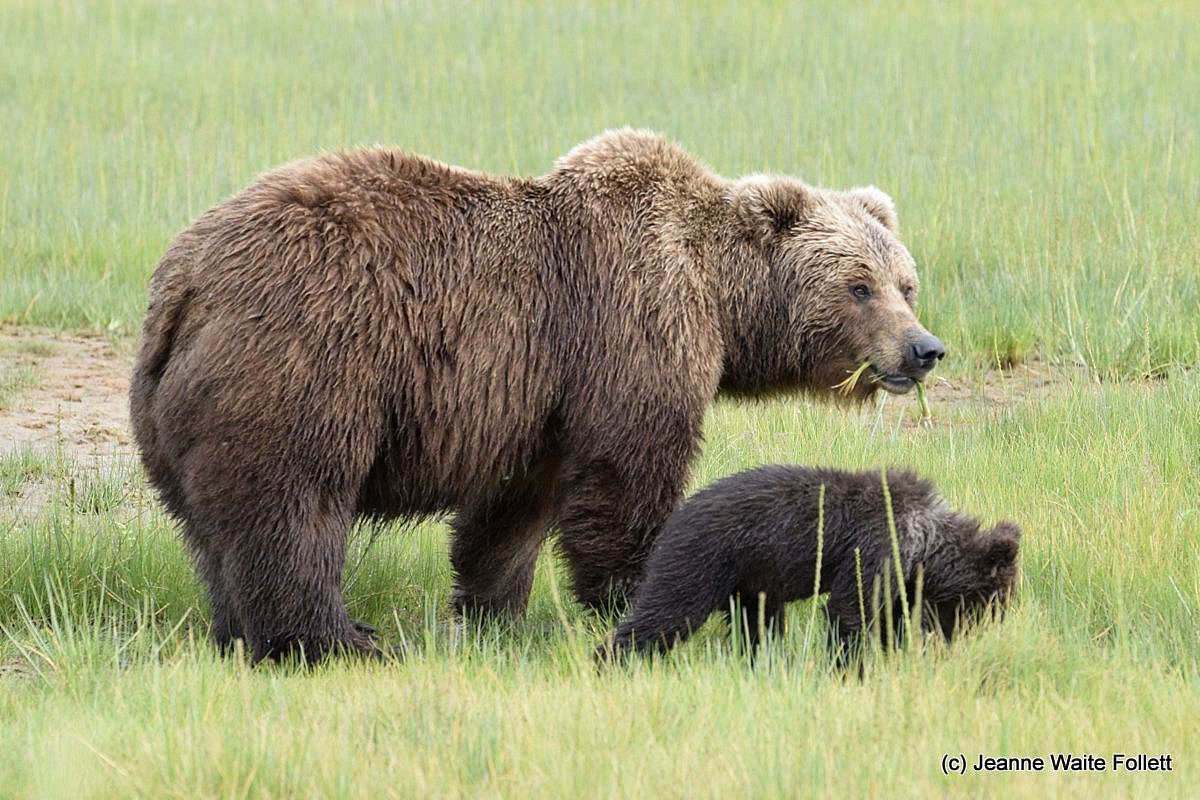 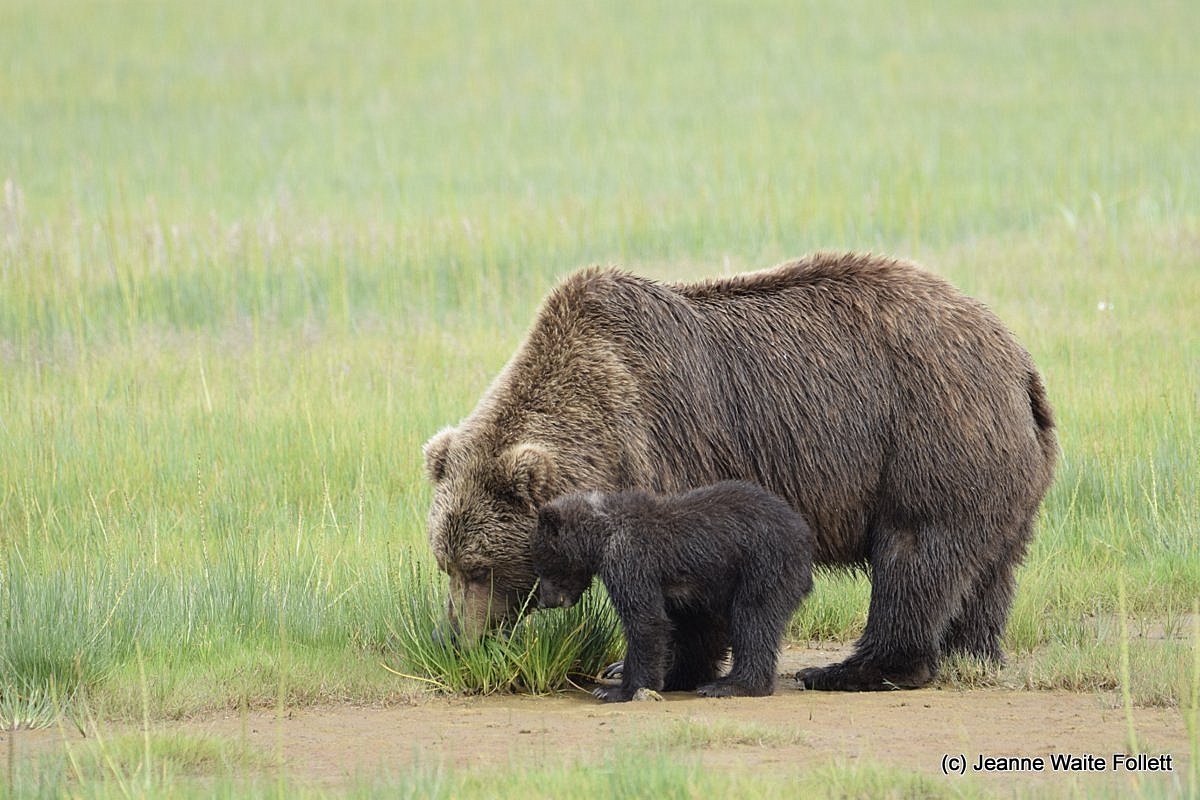 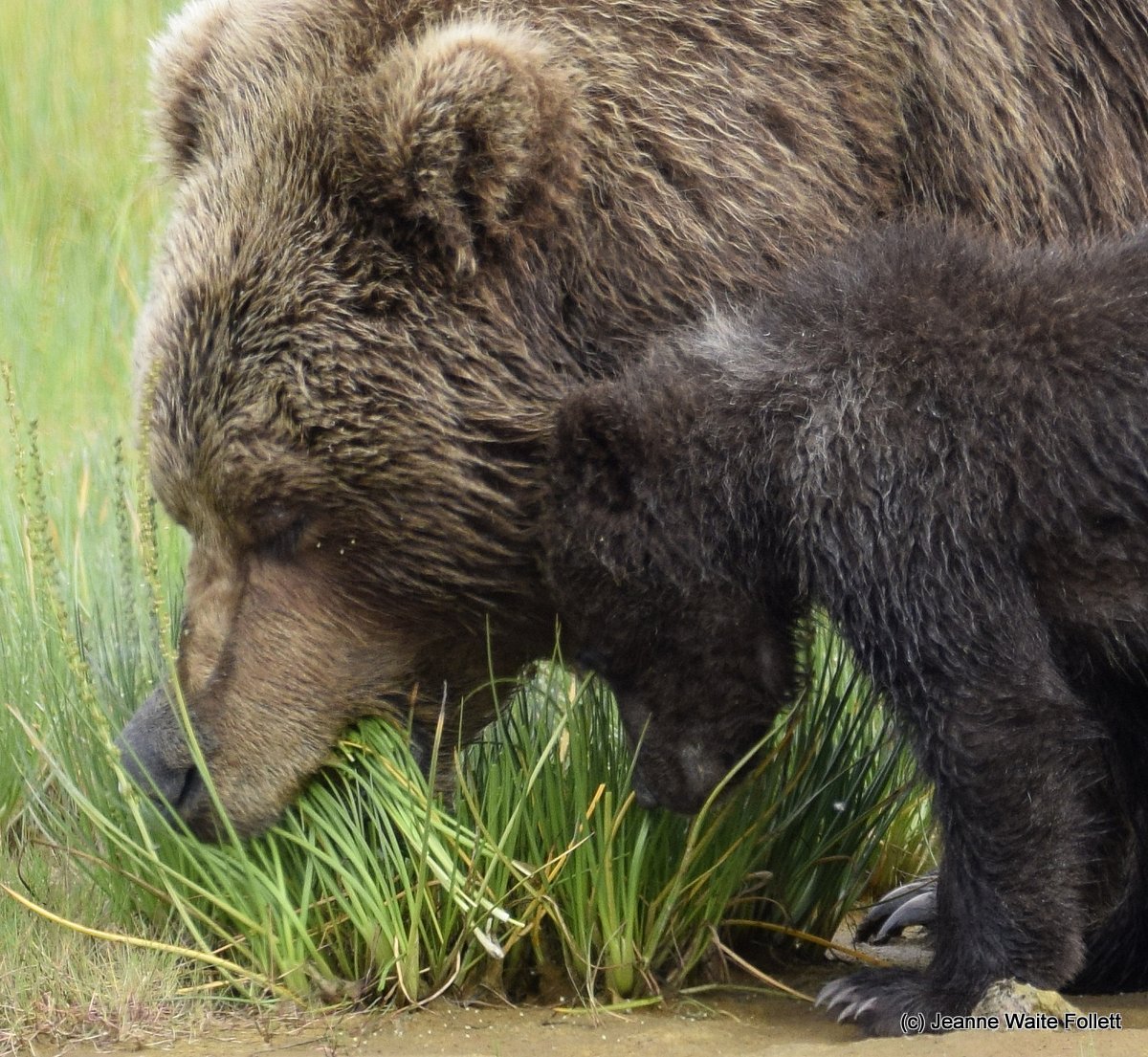 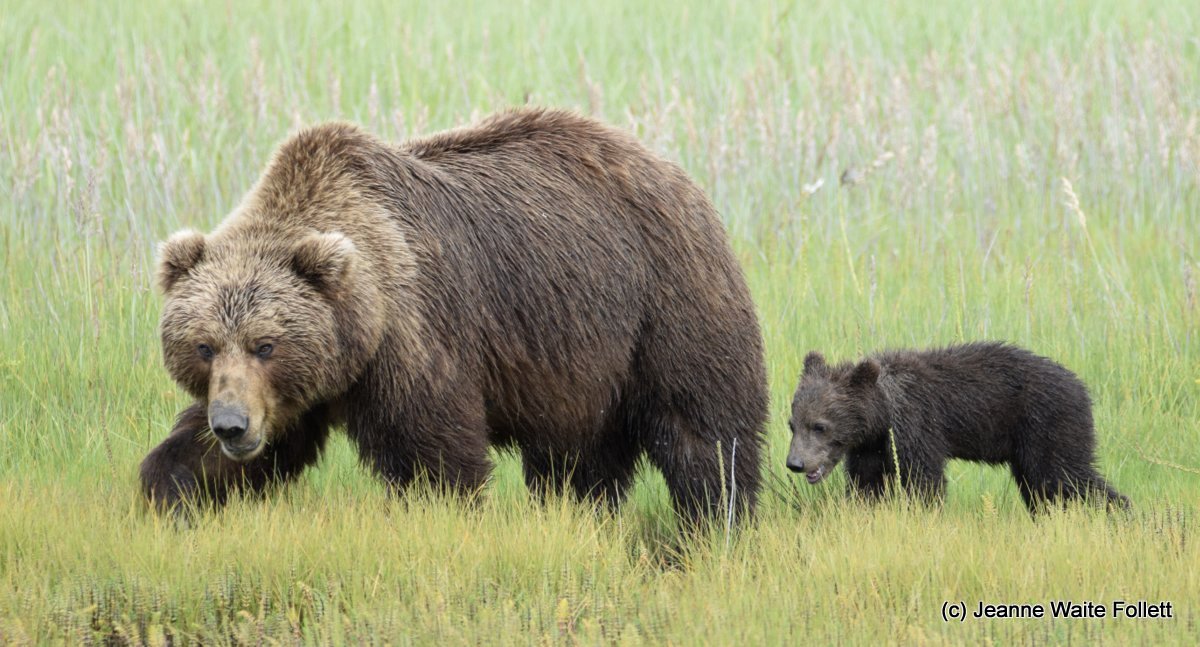 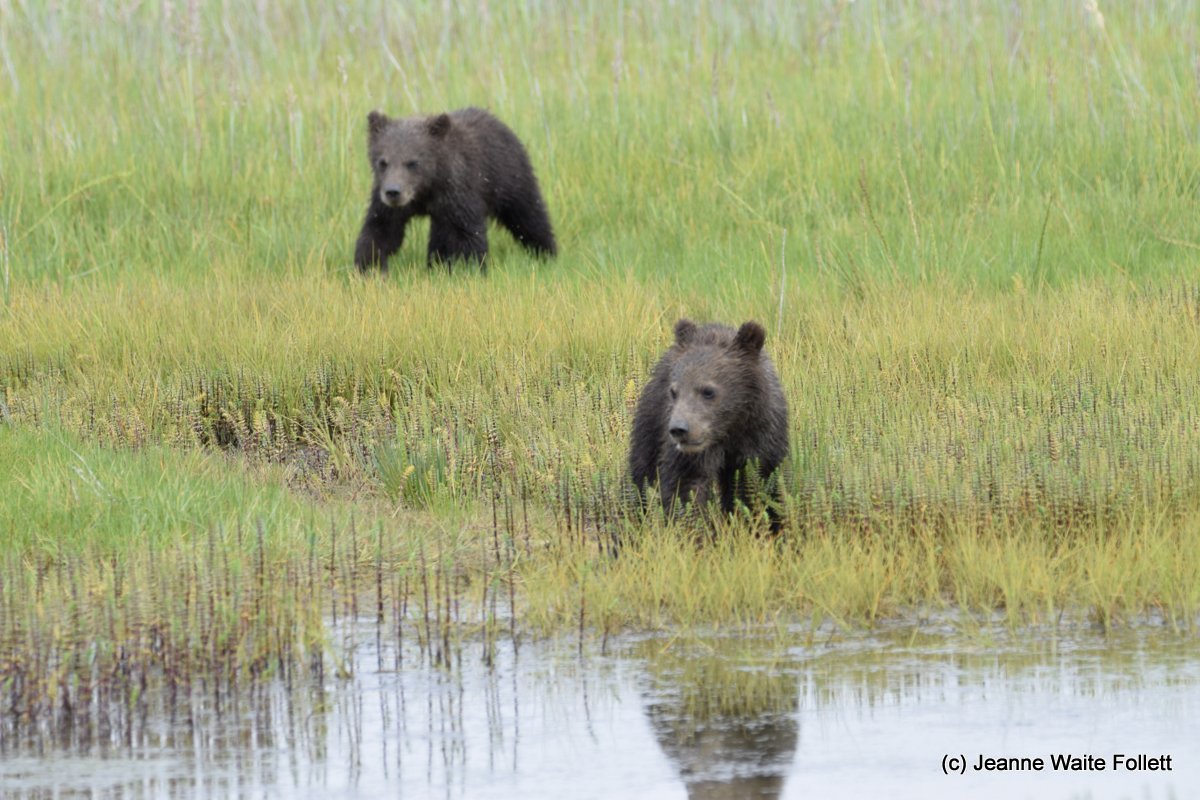 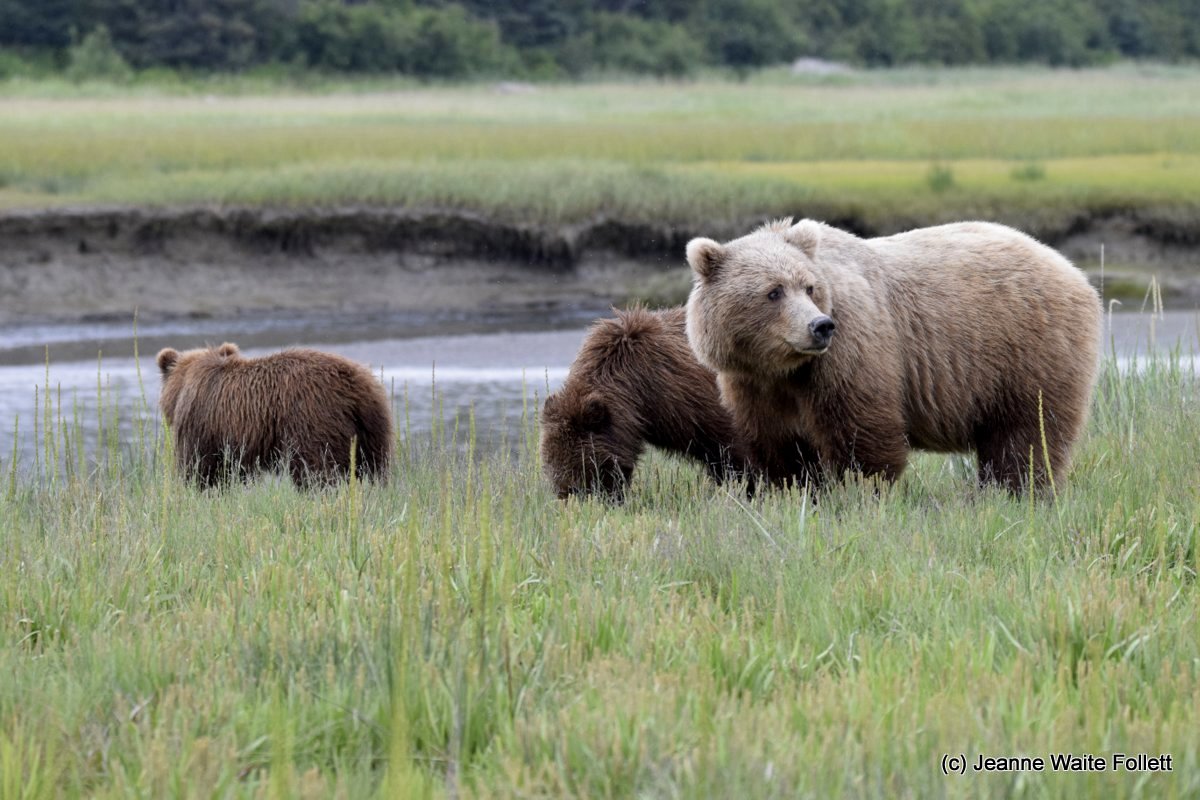 Bears can’t subsist on grass alone, they also need a loaf of bread and a jug of wine  and us beside them in the wilderness…    Oops, wrong story.

They also need protein.   During the early months of summer, razor clams, moose calves, and other “catchables” provide that nourishment. 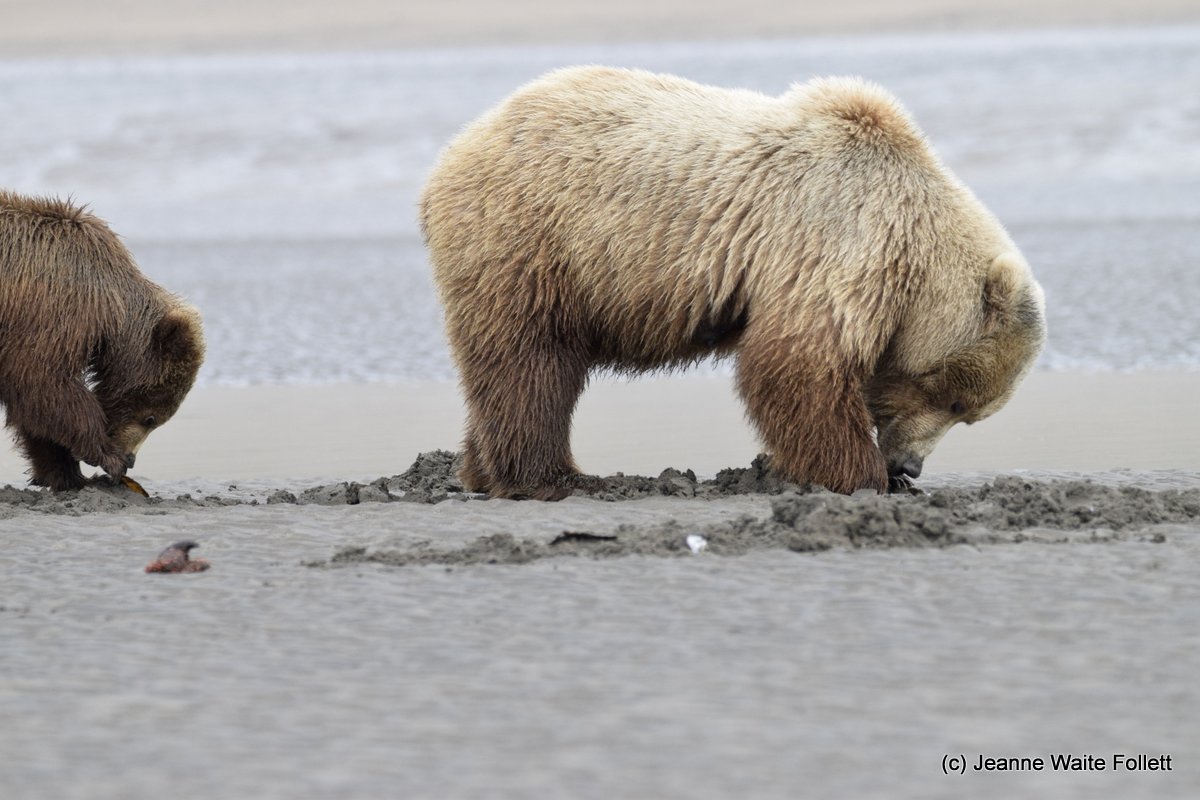 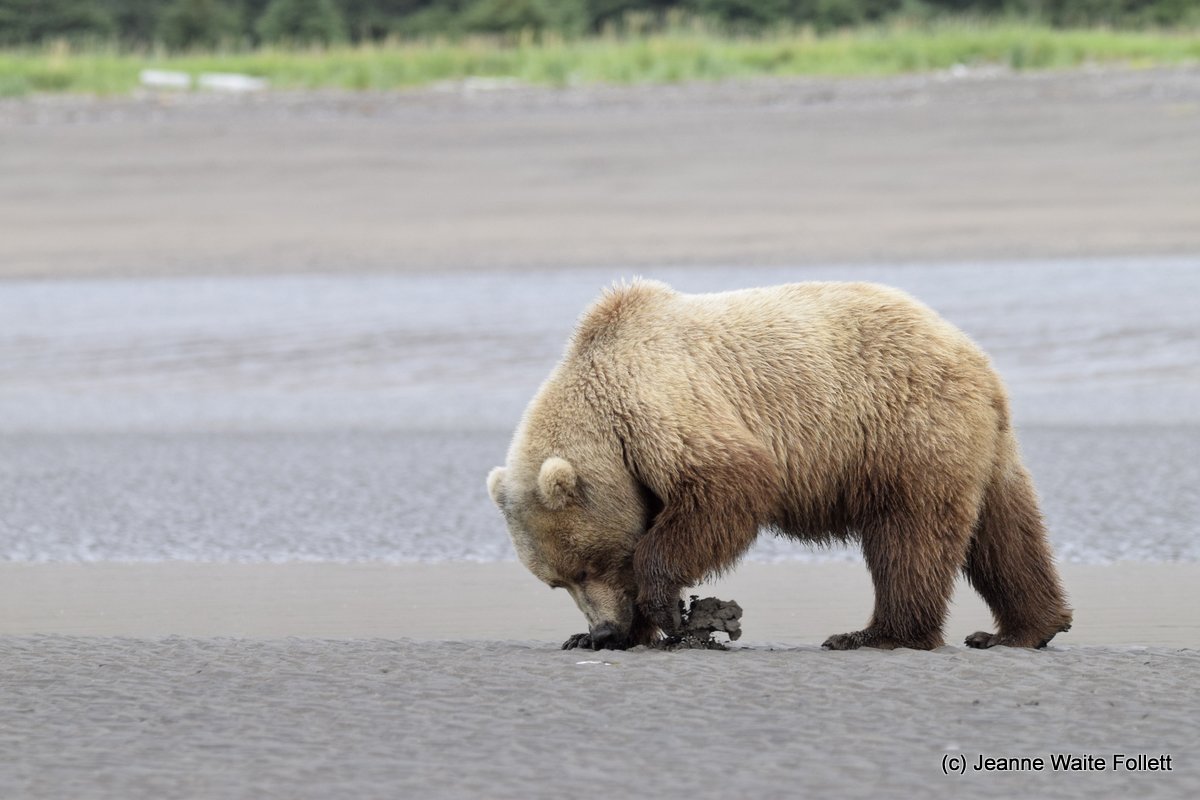 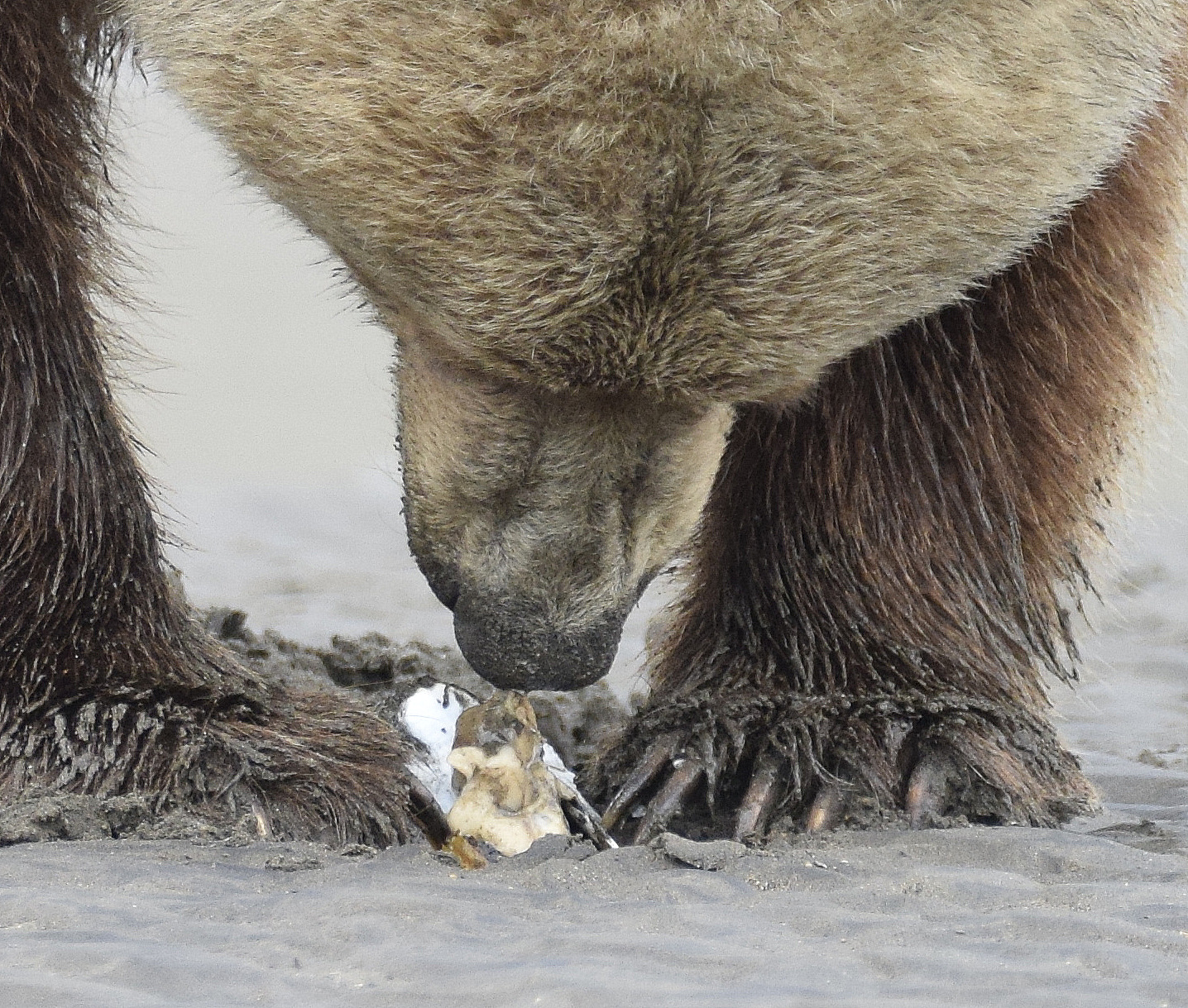 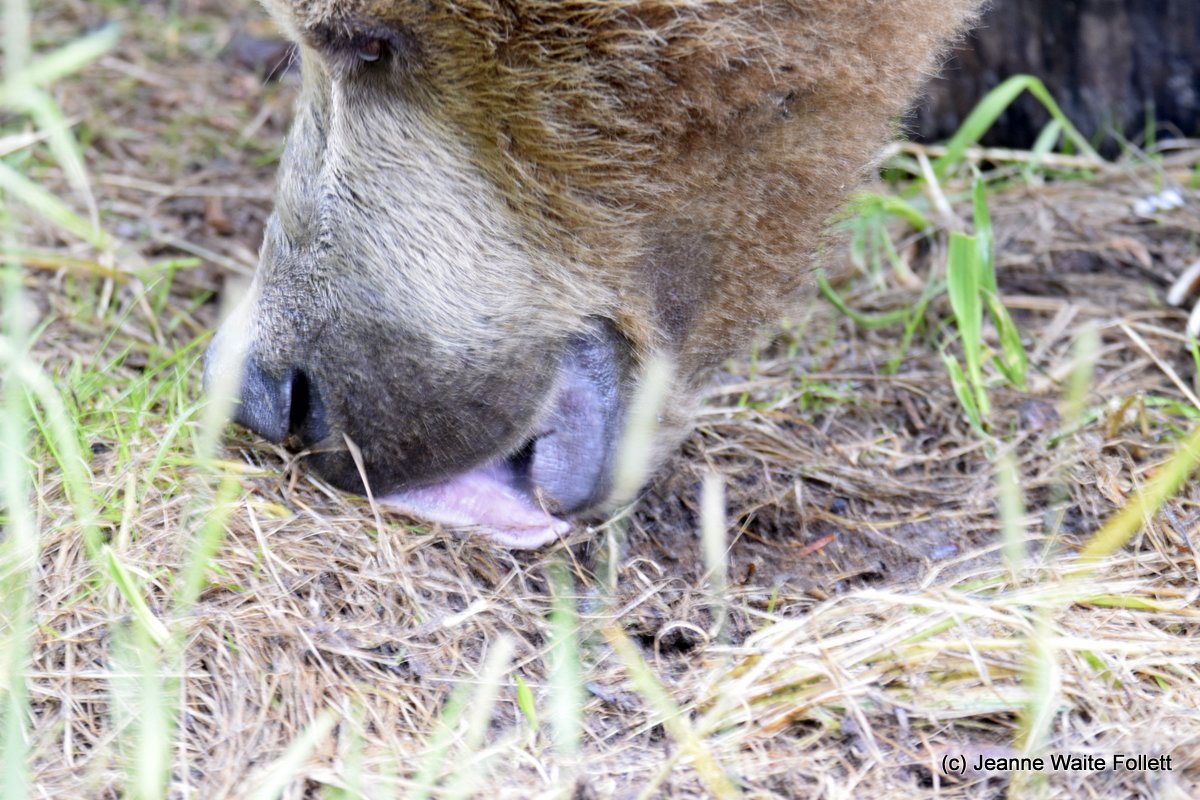 Bears take a high toll on moose calves.   Last spring, a bear killed and devoured a moose calf on my property.

One evening we leave the ATV and carts on the beach and walk through the beach wildflowers to a field where two third season cubs are eating grass. 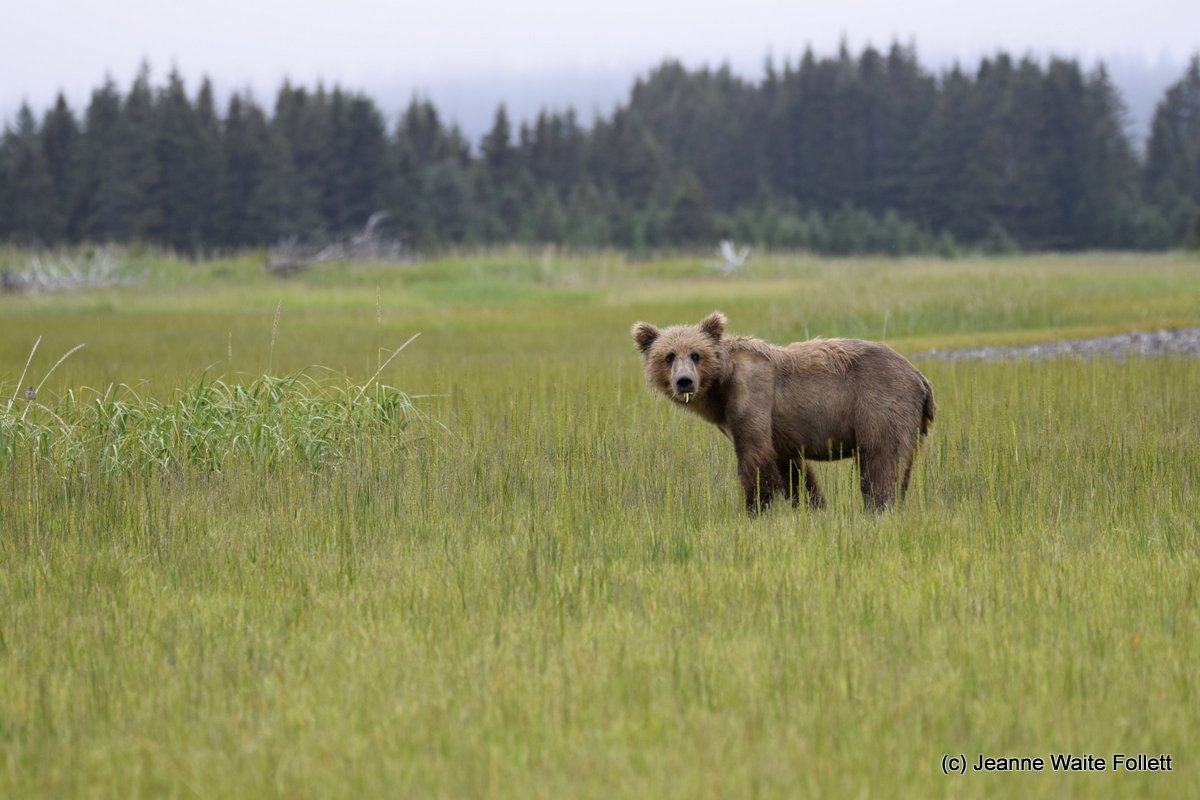 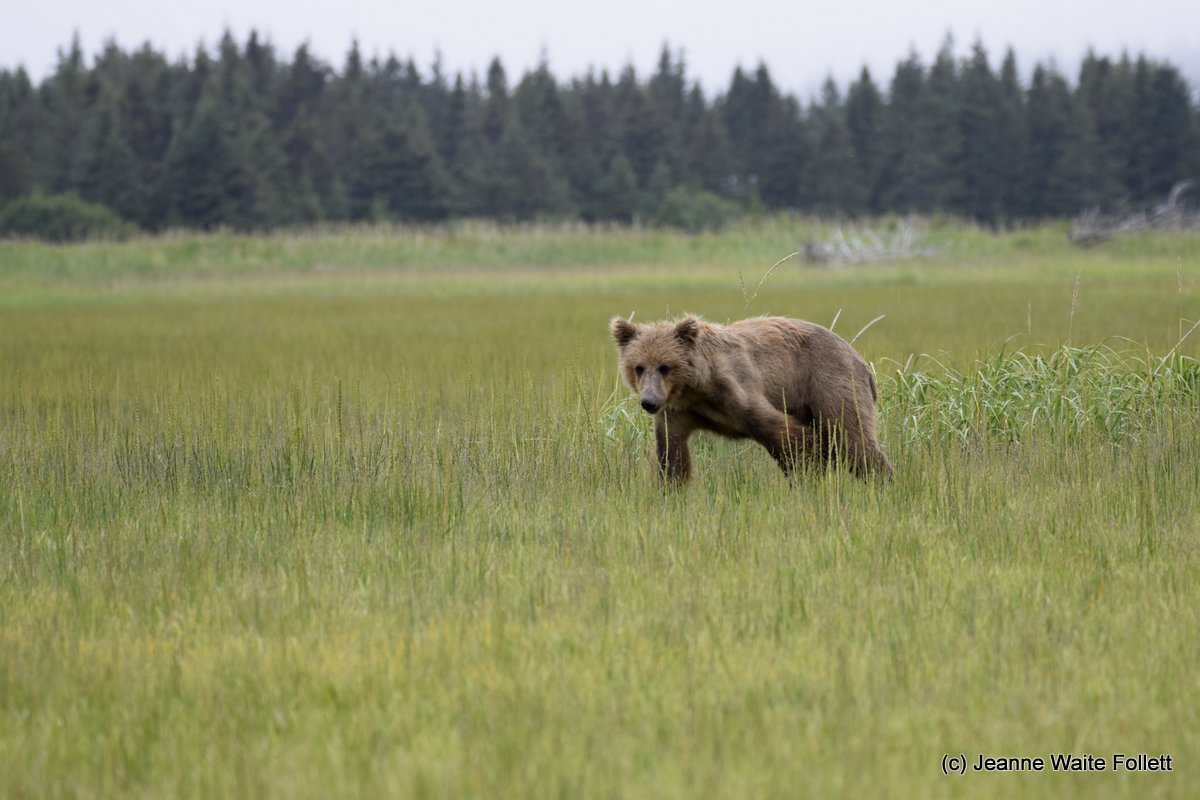 As we watch, a moose and her calf appear.   The moose is obviously stressed, perhaps chased here by another bear or perhaps smelling bears all around. 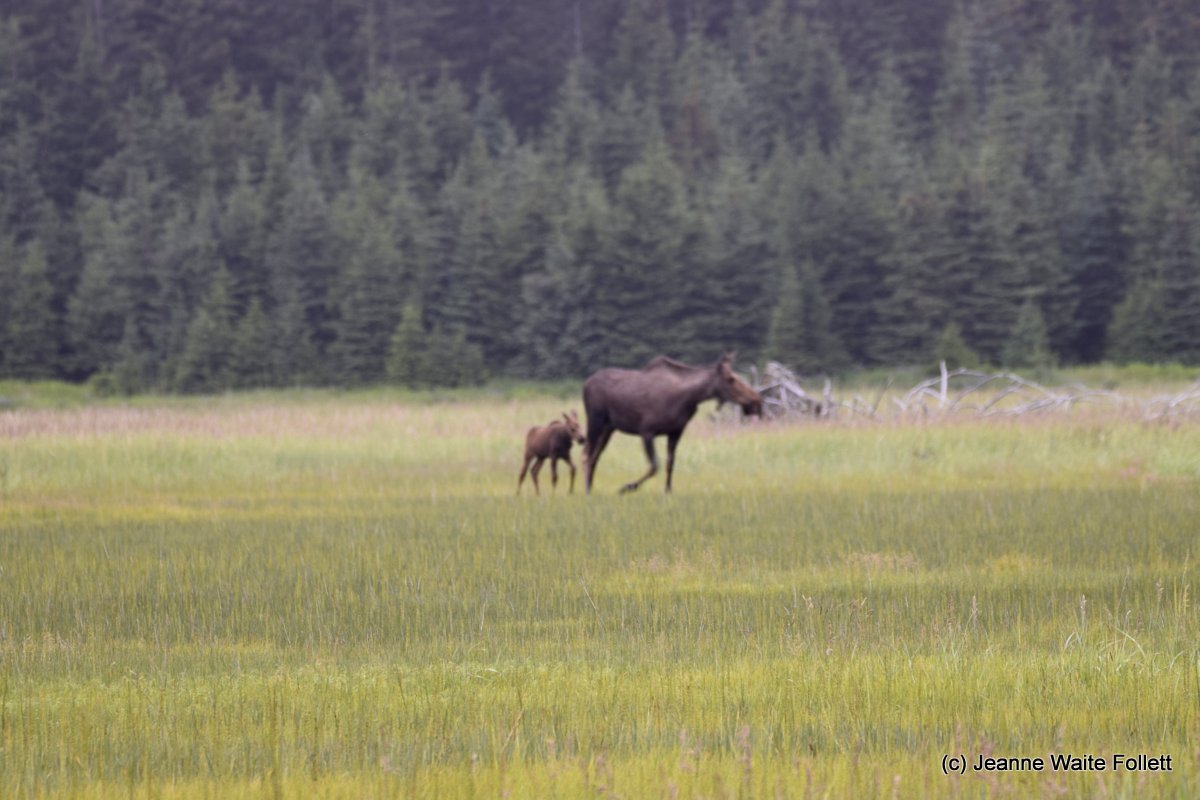 One of the cubs spots her and stands up to investigate.   Maybe it saw its mother chase a moose, or maybe the cub's chase instinct is trigger by the running moose.   It follows, but not at a high speed. 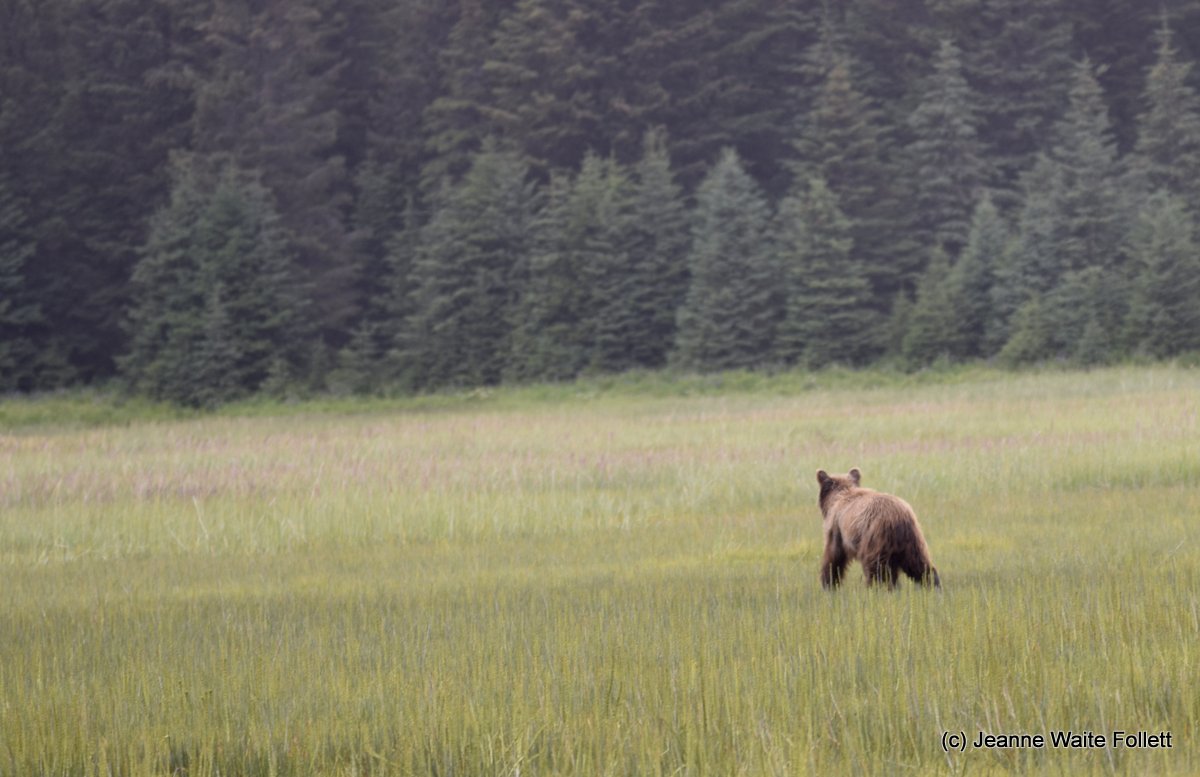 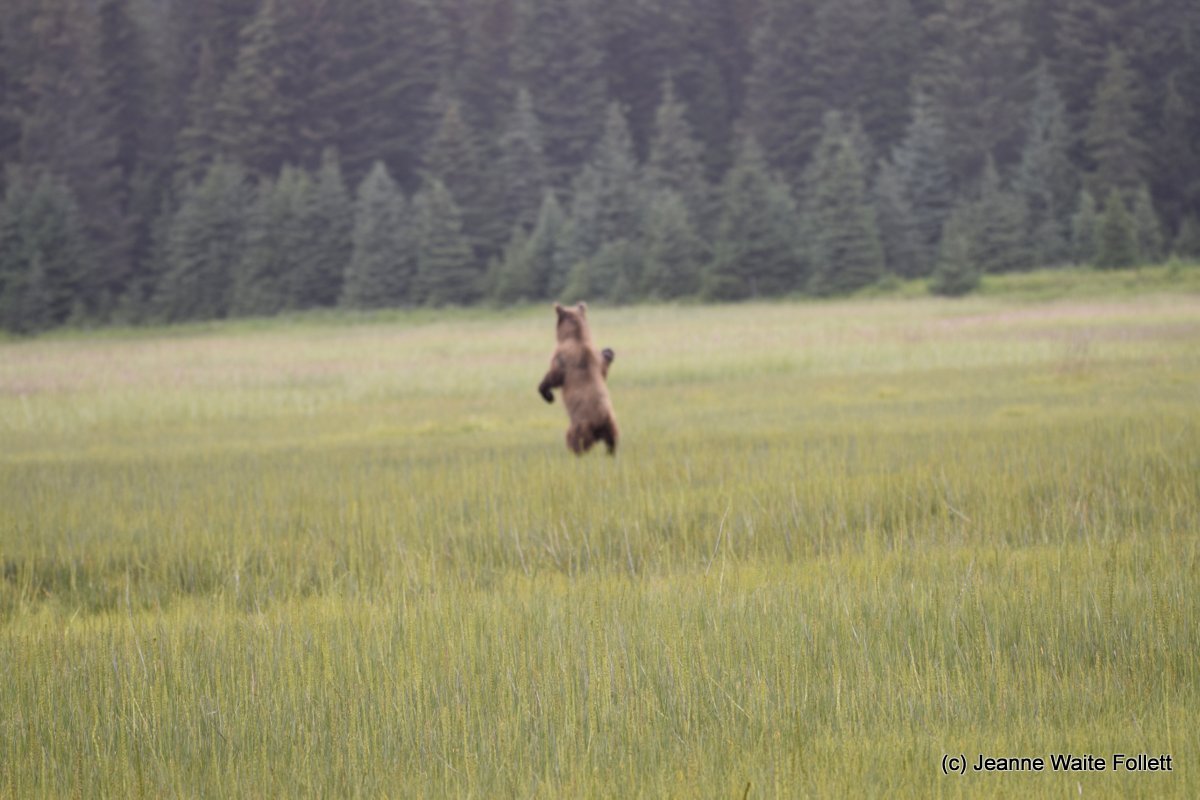 The other cub is oblivious to the drama and not until later does it realize it's been left behind. 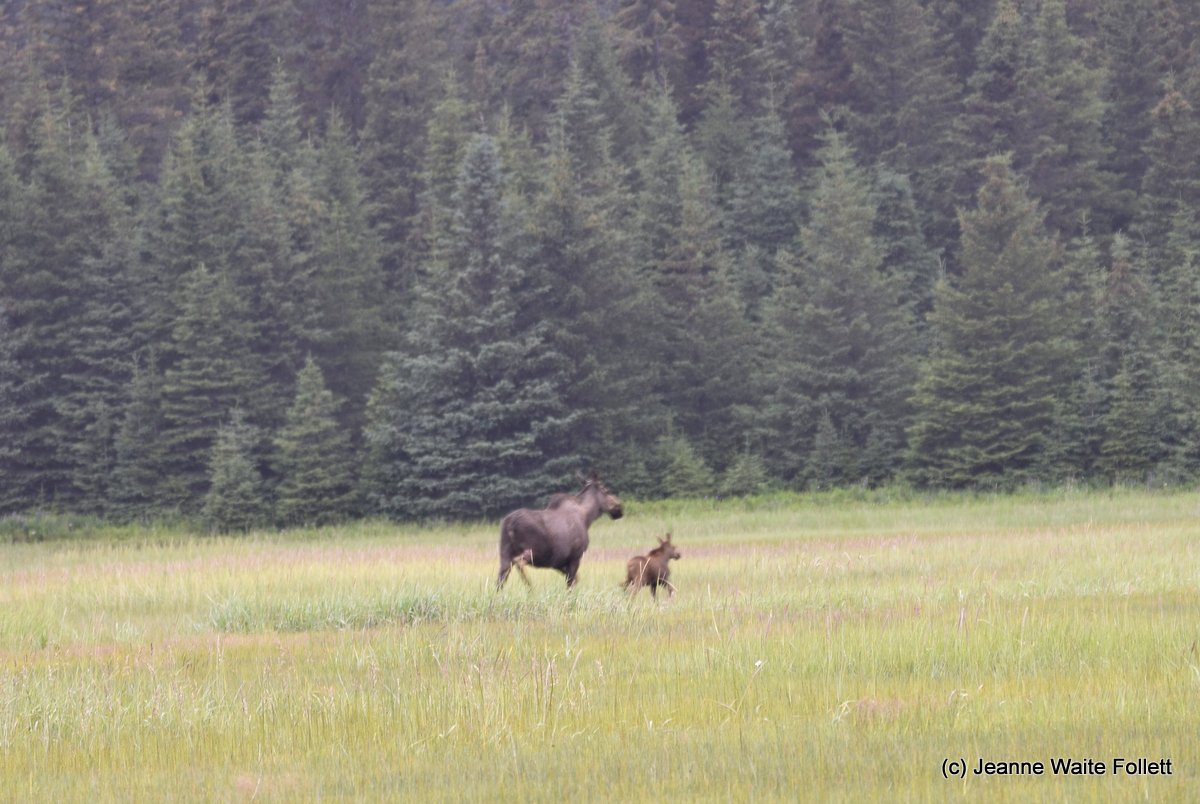 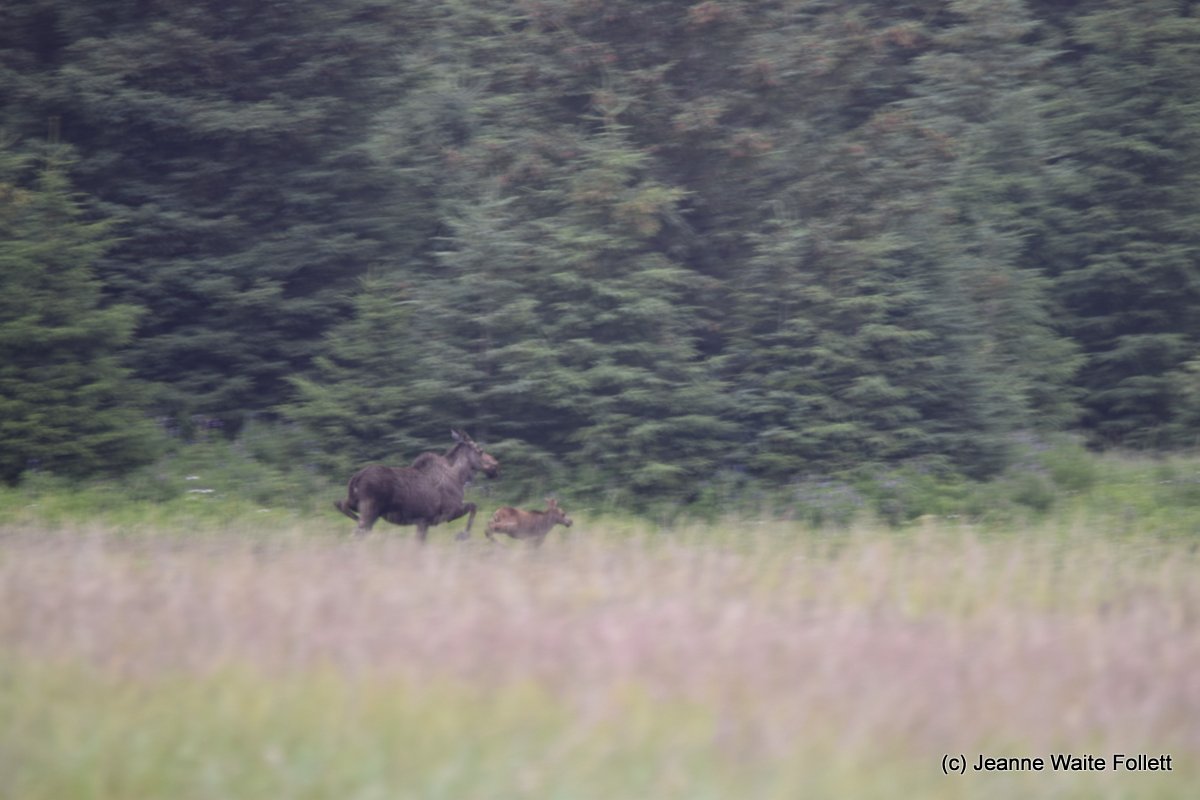 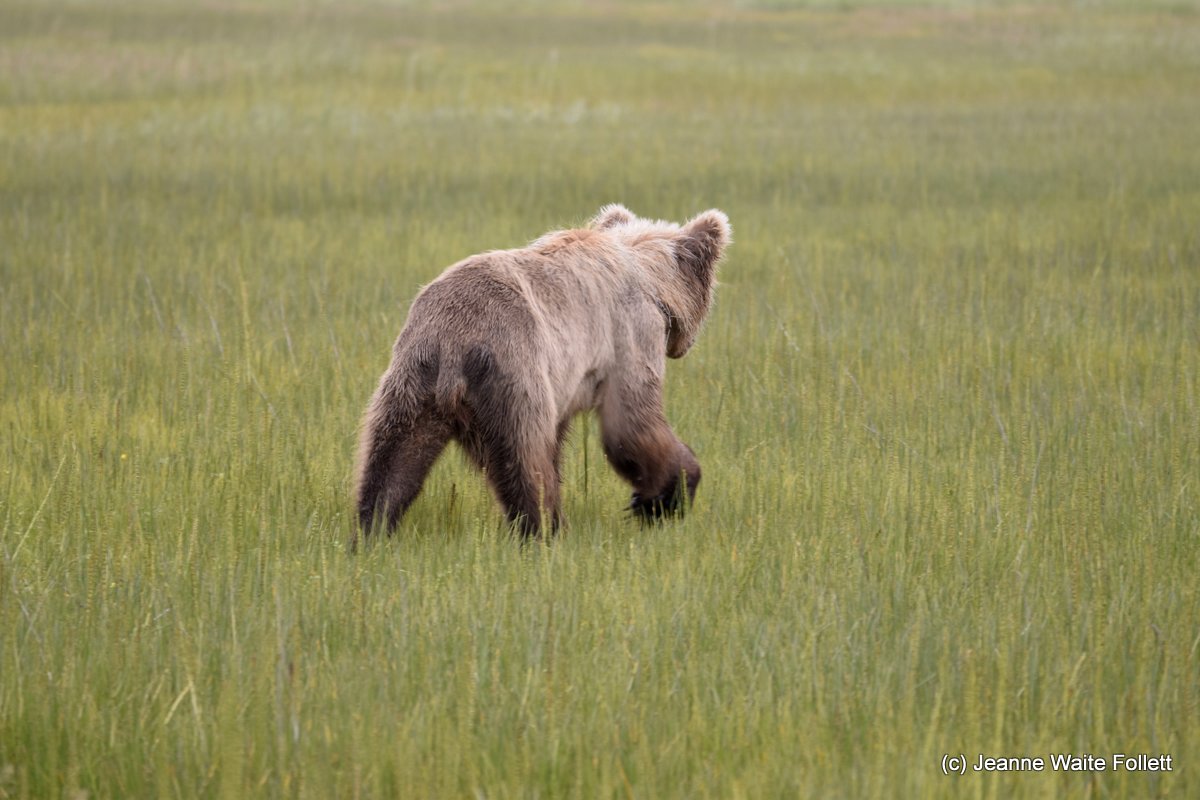 Rick jokes that the cub chasing the moose probably wouldn't know what to do if it caught them.

Once the salmon enter the creeks and rivers on their way to the spawning grounds, the bears gorge on the rich and fatty fish.   This year, we were too early to observe them fishing, so here are a couple photos from last year. 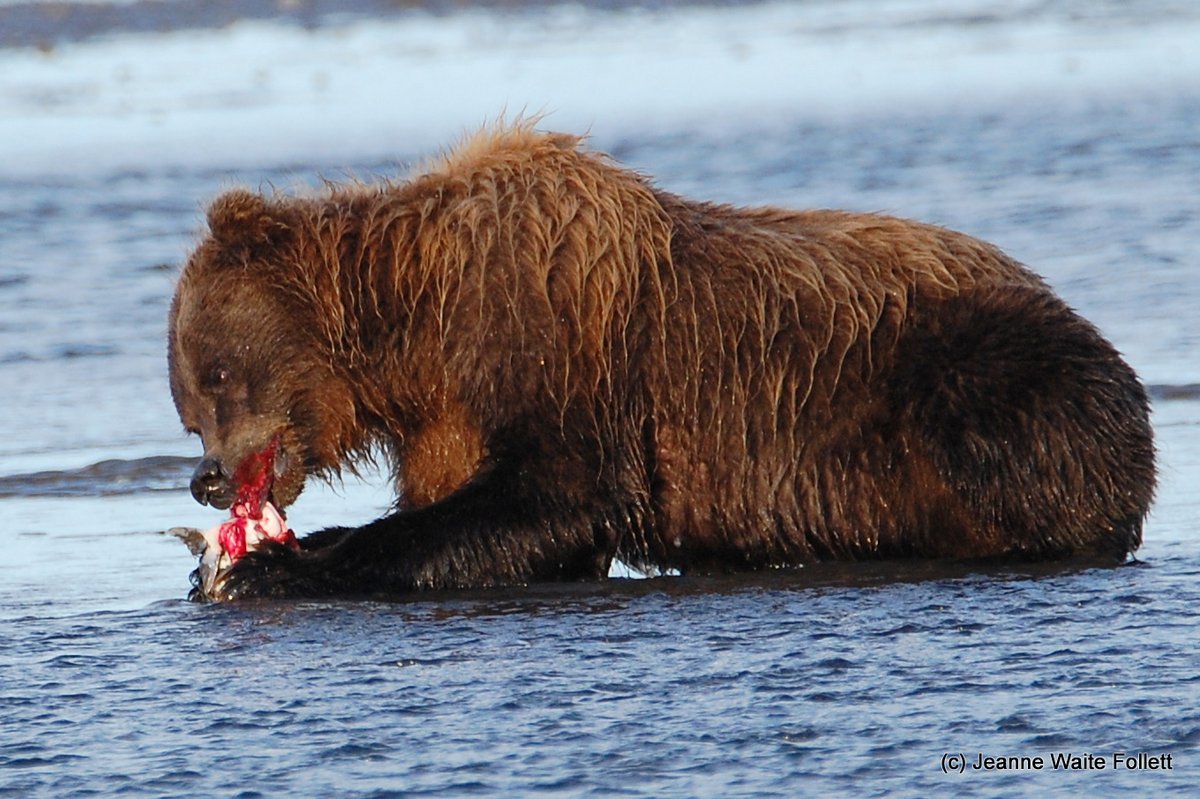 It seems the bears are discerning in their taste for fish.   They love the large silver salmon, called Coho, but they don’t bother with the earlier runs of pink salmon.   Neither do most Alaskans.

Berries.   Bears love berries.   When we first arrived at the lodge, Rick warned us that we might have fewer viewing options because the bears were showing down on a bumper crop of berries.  We saw the evidence everywhere. 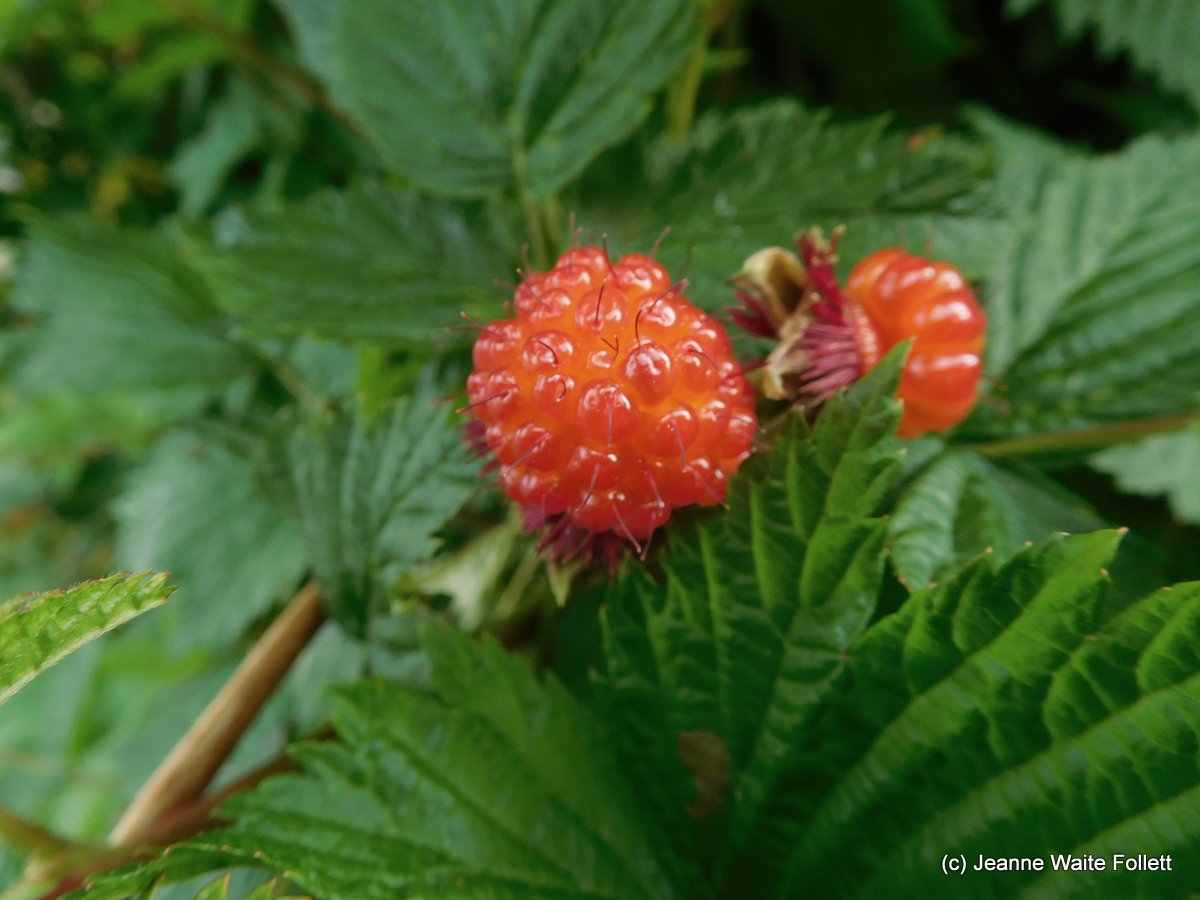 There is also another source of protein for the bears.   We’re traveling along the trail next to the forest one afternoon when Rick stops the ATV and walks back a short distance.  He picks up something from the ground and returns to show us what he has.

It is a claw from a small bear’s hind foot that had been through another bear’s digestive system.

Life is not all grass and salmon for the bears.
Posted by Gullible at 2:30 PM