My friend Pauline died recently. From the time I heard that she was ill, and since she passed, I have spent a lot of time thinking about the dynamo that was Pauline and the times when our paths crossed. I have no doubt that when her final illness wrapped her in its arms and began to squeeze the life from her remarkable eyes, she met it face on, full throttle, and with uncommon grace and courage. I am also certain that the Reaper learned a lesson from Pauline, as I did more than fifty years ago.

I was not near Pauline during her illness, did not talk or otherwise communicate with her. So, how can I be so certain of what I wrote above? I will tell you a story about Pauline and the very events that taught me that valuable lesson many years ago.

Pauline and I were friends, but not best friends. We didn’t hang out together, giggle about boys, or share our innermost teenage angst. Were we not classmates at Anchorage High School, we most likely never would have met. Even after graduation, our disparate interests led us in opposite directions.

The last time I saw Pauline was in 2010 at our fiftieth class reunion. She was as beautiful and gracious as ever. Many of us had purchased the souvenir tee shirts made especially for the event.  Pauline? Oh, Pauline! She modified the neckline and removed the short sleeves. Had I worn it, it would have looked like a tank top. On Pauline it was a fashion statement and she looked radiant in it.

She was everything I wasn’t. If Pauline suffered angst, she never showed it to me; I fairly reeked of the stuff. Pauline was a poised city girl; I was a country girl. She was comfortable in social settings; I was shy and awkward. She had lustrous brown hair and always looked like a model; I had wavy, dark blonde hair and looked like I had a rat’s nest tied to the back of my head if I tried to wear it in a pony tail. If Pauline had been in my pre-teen Girl Scout Troop, she would have been with the majority, the girls who wanted to learn to dance and use makeup; I wanted to go camping and learn to tie knots.

If she were in a crowded room, you’d know it; if I were in that same room, you might stumble across me trying to become one with the wallpaper.

She was a charter member of the Cotillion Club, a group organized by parents for the debutantes and young men of Anchorage society to learn and practice ballroom dancing. She was a Junior Prom princess; I never went to the dances. She was a majorette; I volunteered to work in the coat check room during basketball games.

Yet somehow, we were friends. She invited me to her home a couple times; she was never in mine, nor at the one party I had there with three close friends. I was never, ever going to be invited to join
the Cotillion Club, yet it was because of the Cotillion Club that I learned that lesson from Pauline, and it caught me behaving at my teenaged worst.

There was to be a school assembly in the spring of 1958, during which a chosen few, undoubtedly members of the Cotillion Club, were to demonstrate ballroom dancing. When it began, I was seated on the far right side of the auditorium, quite close to the front.

On the stage before me, Pauline, as striking and beautiful as ever, was dancing a waltz with the gorgeous and talented Louis, a senior, and the most popular boy in school. Remember, this was 1958, and that meant the dance partners were actually touching each other, with the boy’s left hand holding the girl’s right hand, and his right gently at her waist. The girl’s left hand rested lightly on the boy’s shoulder and there was daylight between the two of them.

As Louis and Pauline twirled and whirled on the stage, I noticed something. I noticed it because my eyes were on Louis and I was wishing I were up there dancing with him. Yes, I was smitten like most every girl in school, and quite envious of Pauline. What I saw was Pauline’s slip. Gasp! Having your slip show was akin to walking about stark naked in those days, a social faux pas ripe with the potential to ruin your life forever.

And this wasn’t any old slip. No, this was a petticoat, designed to be worn under full skirts and hold them out. You might remember those skirts with the felt poodles on them? That’s what those petticoats were for. And Pauline’s was quite noticeable in its voluminous, ruffled, white glory as it slipped lower and lower, unwinding itself from her waist with every spin.

I snickered. So did those sitting next to me. As Louis twirled Pauline around and around, the petticoat descended lower and lower. I watched in gleeful and morbid fascination, both anticipating and dreading the train wreck that was about to occur. Pauline would have to leave the stage quite soon, and in her embarrassment she would know what it was like to feel as awkward as I did. Plus, she would no longer be in Louis's arms!   Even better.


I never did get to dance with Louis, but a decade and more later he came back to Anchorage for a short visit. Employed as an entertainer on a cruise ship that had docked in Anchorage, he had but a few hours in town. Pauline hosted a gathering at her family home for him and she invited everyone who knew him.

I drove to Pauline’s home. She welcomed me graciously. When Louis arrived, he began greeting everyone there. When he got to me, his smile got even brighter and he gave me a big hug and said he had hoped he would see me there.


As I watched him greet others, moving effortlessly through the small gathering, I thought back to the dance exhibition on that AHS stage and that petticoat descending to the floor. They were right in front of me, twirling, swirling, whirling, their poise in peril of being undone by that white garment.

Cool as can be, Pauline and Louis somehow whipped off the wayward petticoat and tossed it aside, never missing a step.

I sat there stunned. As I thought about what had just happened, I realized I had just seen something very special, something that had me examining my own teenaged pettiness and envy. Pretty, popular Pauline, dancing with the wonderful Louis, had exhibited a grace under pressure that few teenagers could pull off.

And that’s my favorite memory of Pauline and her misbehaving petticoat that taught me a lesson I’ve
never forgotten, and why I believe she handled her last days with the grace and courage she exhibited
in high school so long ago.


(Pauline died August 4 of this year after an 18 month fight against ALS, also known as Lou Gehrig's disease She was 71.)
Posted by Gullible at 8:01 PM 5 comments:
Email ThisBlogThis!Share to TwitterShare to FacebookShare to Pinterest
Labels: AHS CLass of 1960 reunion, Louis, Pauline Reed

A flu shot in the left arm, a pneumonia shot in the right arm = two sore upper arms and a dream about flying in a dirigible though fantastical villages in the Antarctic, interspersed with hurtling down perilous cliffs on a Chinese narrow gauge train at the speed of a bullet train, while avoiding  penguins with hawks-bill turtle beaks and rabid pug dogs.

1.       “Voodoo River” by Robert Crais for the mental image of a hundred pound turtle’s beak, the book I was reading before I fell asleep;

2.       The apparently lonely man at the veterinary clinic’s reception desk who obviously didn’t want to end the quality time with the vet and talked incessantly about the chubby, bug-eyed pug on a leash at his feet, for the fifteen minutes I was there.

ALL NIGHT, EVERY NIGHT AT THE MOVIES

Posted by Gullible at 5:54 PM No comments:
Email ThisBlogThis!Share to TwitterShare to FacebookShare to Pinterest
Labels: dreams 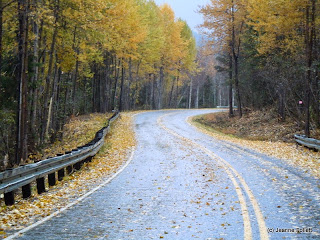 Computer recovery continues as Carbonite restores my documents and thousands of photographs.   Worth every cent.

In the meantime, autumn marches inexorably to that time when I'll need the studded snow tires mounted on my vehicles, and it is not a chore I enjoy.  As I write, the wild, wet, windy weather of last evening has morphed into an eerie stillness with rain falling straight down, mixed in with some suspiciously large and individually-seen white drops that I don't care to identify.

There's a fire in the woodstove, a mug of hot chocolate by my side, and the Seattle Seahawks game  soon to begin, assuming those large white drops don't obscure the satellite signal.

Time to go back a week or two and continue our drive through autumn. 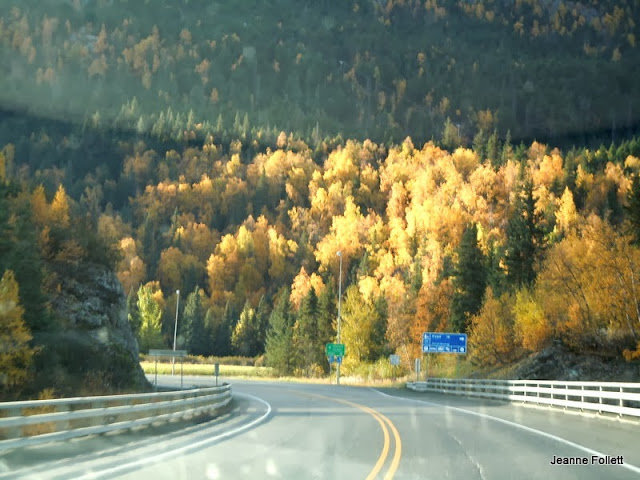 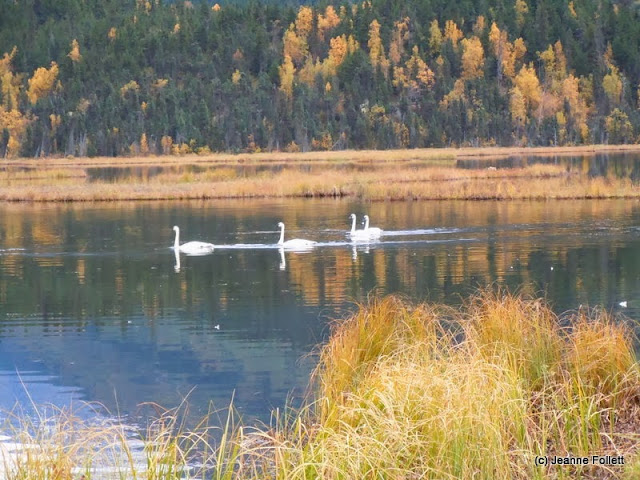 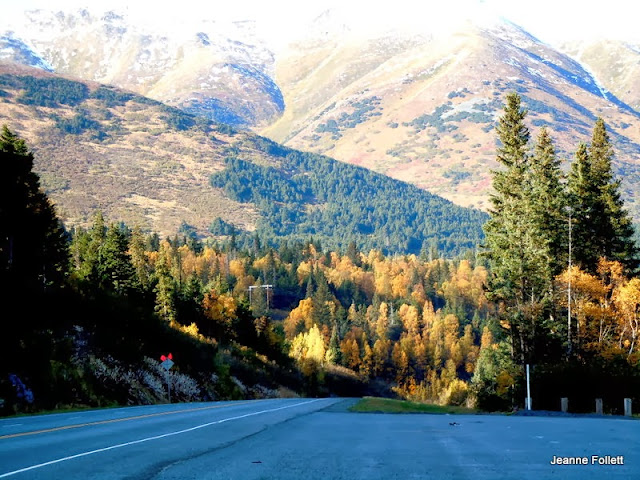 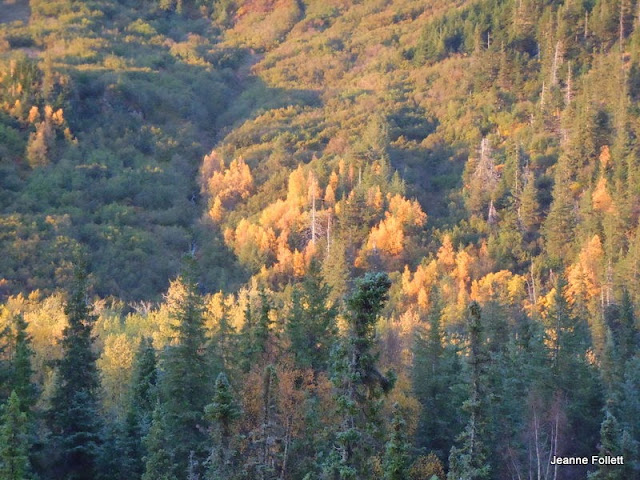 And home to my driveway. 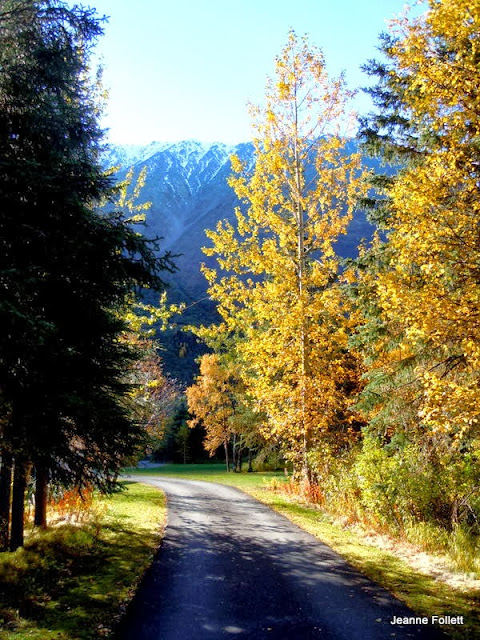 Let's do this again.   Stay tuned.

Posted by Gullible at 10:02 PM 3 comments:
Email ThisBlogThis!Share to TwitterShare to FacebookShare to Pinterest
Labels: autumn 2013

Driving through Autumn, Part One

My computer, laptop, and tablet may have been down for a couple weeks, but my cameras were not.  All this occurred during our late autumn, notwithstanding an unusually early snowfall on Sept. 26.

Starting now, I will post a series of autumn photos, with little yakking on my part.   I hope you enjoy them as I continue working to restore all the Word docs and photos on my computer.

So, here we go:   Driving through Autumn

And I have lots, lots more.

Posted by Gullible at 7:00 PM 2 comments:
Email ThisBlogThis!Share to TwitterShare to FacebookShare to Pinterest
Labels: autumn 2013


For five of the last six days, I’ve been away from home from early morning until evening.  I’ve been on the road, driving 200 miles a day, making trips to Anchorage and Seward, delivering mail, picking up litter, and dealing with misbehaving computers and tablets. 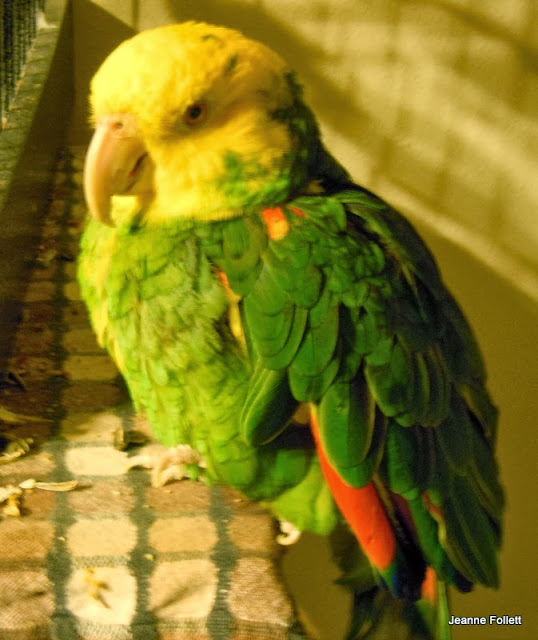 That means my little green pal has spent many hours in his cage.   Probably sleeping.

When I get home in the evening, I try to spend some one-on-one time with him.  I put my feet  up on the hassock and Pablo crawls all over me until he reaches  my knee. 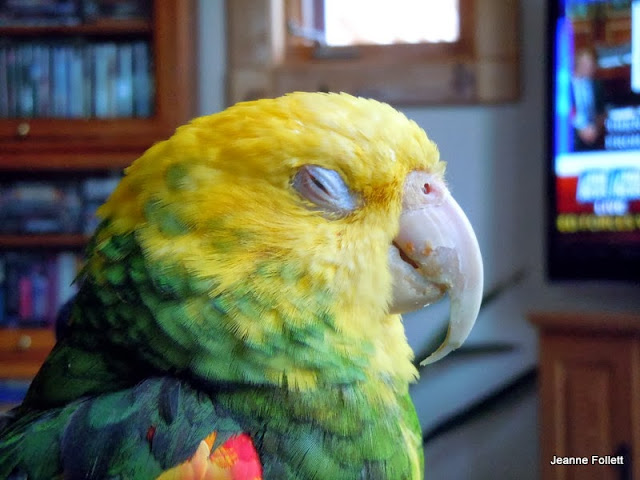