Signs of the Times: Autumn 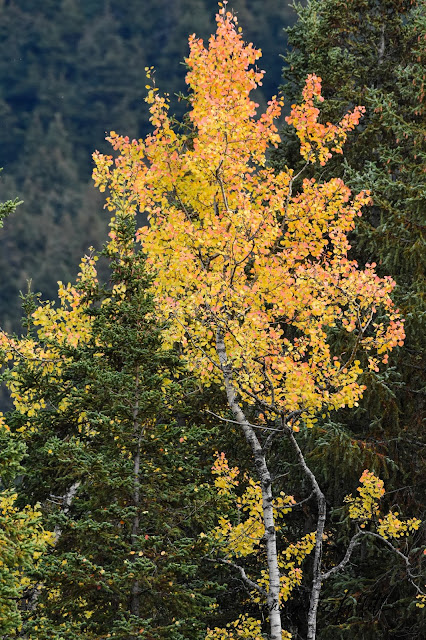 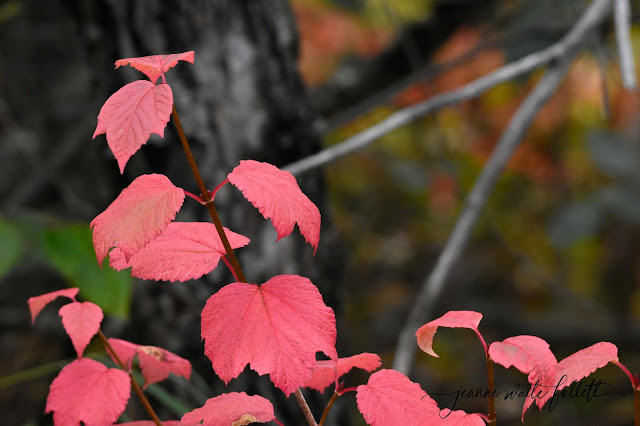 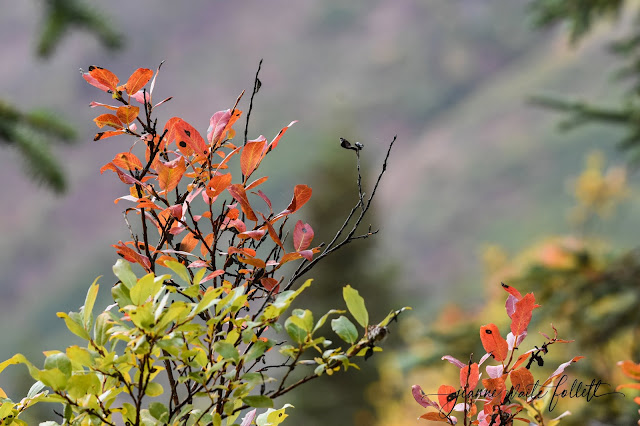 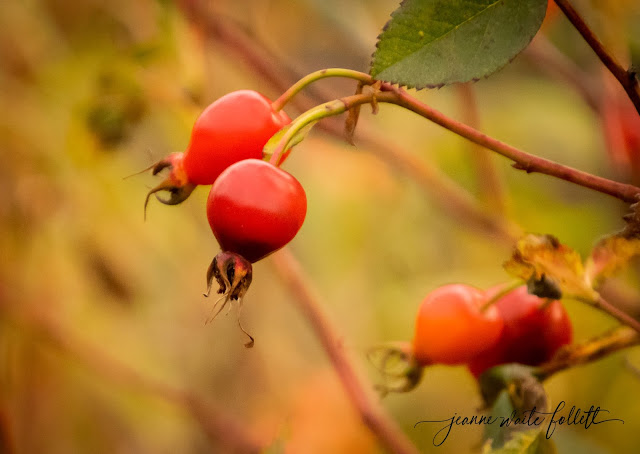 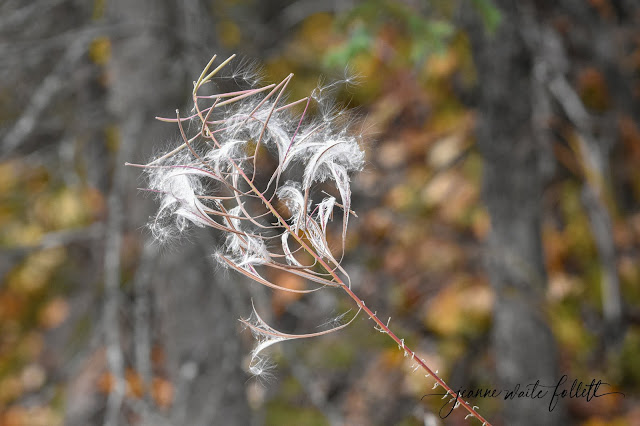 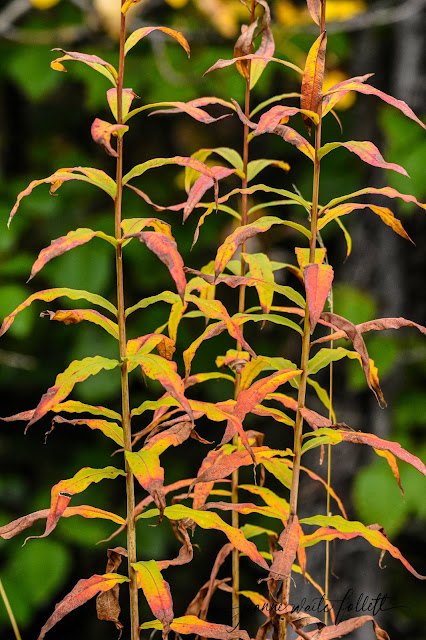 Posted by Gullible at 10:49 PM 5 comments:
Email ThisBlogThis!Share to TwitterShare to FacebookShare to Pinterest
Labels: autumn

The Stepladder and the Chainsaw

Twenty years ago when I was designing the house in which I now live, the two most important tools were an eight-foot stepladder and a chainsaw.

The chainsaw was used to make a dent in the thick forest at the site I had determined the house would be built.


Once I'd cleared enough trees to make a footprint, I would move the ladder around, climb up it, and ask myself, "What would I see if I placed a window here?"

And that's how the house was designed, which includes some 36 windows.

A recent visitor said, "I feel like I'm outdoors."   Perfect.   That's what I was looking for.

I  am rewarded all year with magnificent views.But Autumn is the season that really shines, even on a rainy day. 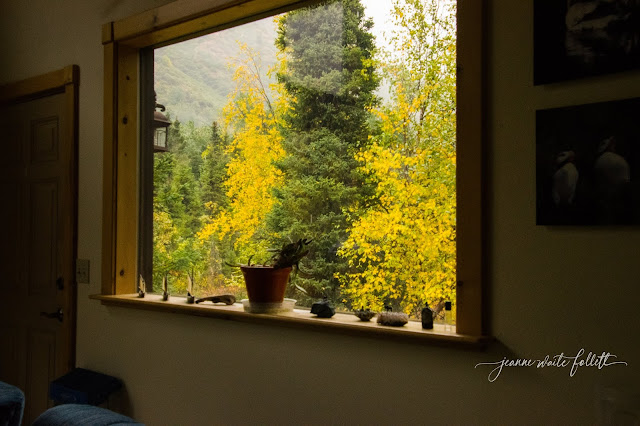 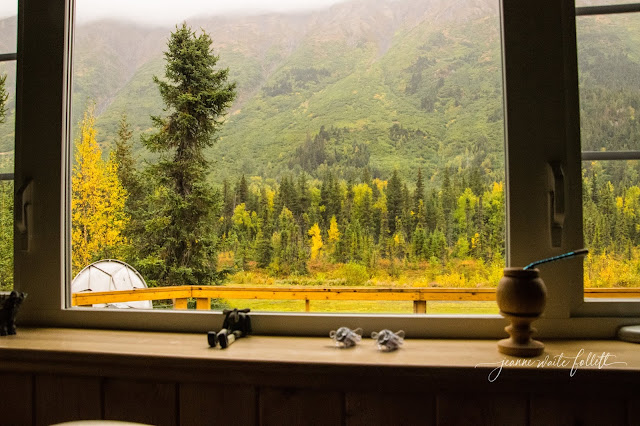 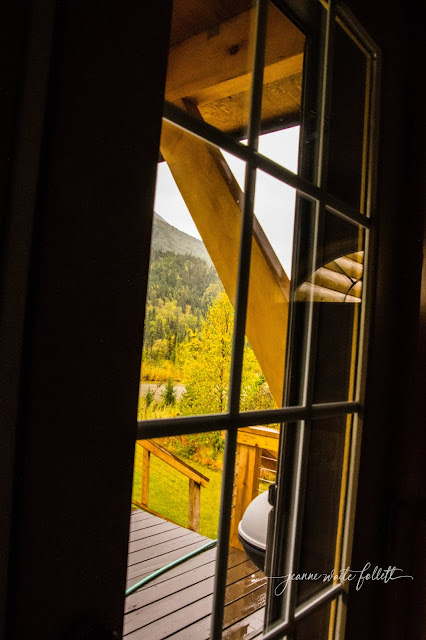 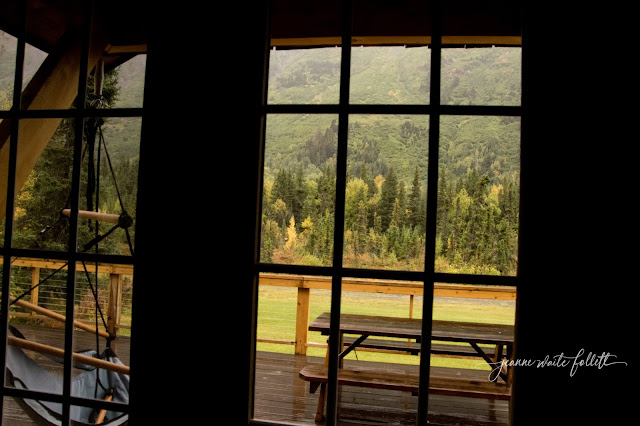 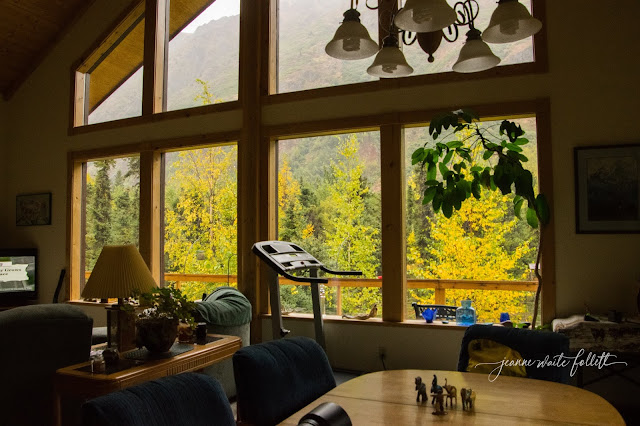 Posted by Gullible at 12:11 AM 2 comments:
Email ThisBlogThis!Share to TwitterShare to FacebookShare to Pinterest
Labels: autumn

I headed out to refill the bird feeders today, dropping off a handful of in-the-shell peanuts for the Steller's jays, magpies, and Squirrel.

I worked my way back along the deck guardrail, sprinkling half a cup of black oil sunflower seeds in one feeder, checking the fill level of the shelled sunflower dispenser,  and then farther back to another feeder.

I noticed a particularly large bird splat on the deck and wondered what could have made a dropping that large.  It was all in one puddle, so the bird must have been perched on the rail when it relieved itself.  Also, that meant it wasn't an eagle, which squirts a lively and lengthy stream all over tarnation.


Then I looked up.   There on the rail in front of the yet to be filled feeder were three small fish, each roughly four inches long.  They appeared to have a goodly amount of mud on them and only one was intact.   The other two were headless.


My thoughts immediately went to the usual suspects:    Corvids!

If there's been mischief about, blame it on the magpies and Steller's jays, is what I always say.   I examined the fish carefully and not-too-closely, although there did not seem to be any odor coming from them. 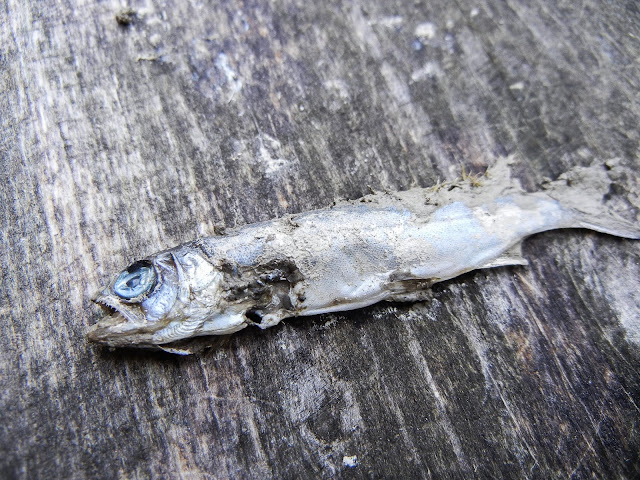 B.   What?   Where would these fish come from and why are they covered in what I think is mud?   Tern Lake is less than a mile away.  There's lots of swampy muskeg quit near and it is known to have fingerlings in it.

D.   Where?   Pfft.   My front deck where all the bird feeders are located.

To further compound the mystery, an hour later the fish were gone.   I was away from the window during that time.   But, even if a magpie or a jay had taken them, they are opportunistic feeders and that might not be proof they they put them there originally.


The only clue I have as to the culprit is a triangular mark on one fish.   It is the perfect shape of a bird's beak.    A corvid-sized bird, perhaps.   Maybe something a bit larger.   A beak that has the ability to clamp down hard and leave a deep impression.   A beak not necessarily designed for strictly seed-eating. 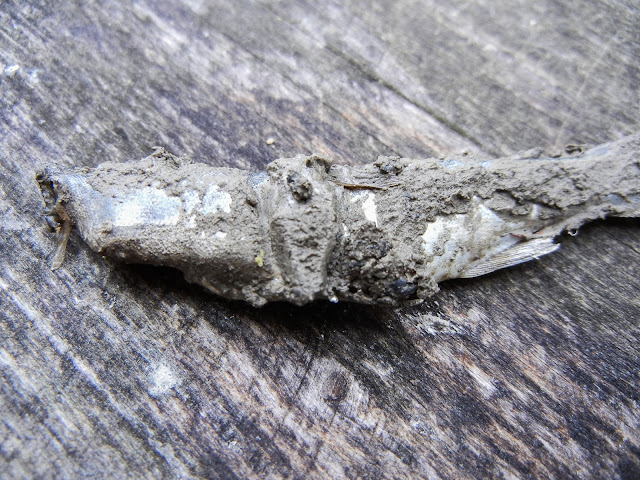 'Tis a mystery.
Posted by Gullible at 1:21 AM 3 comments:
Email ThisBlogThis!Share to TwitterShare to FacebookShare to Pinterest
Labels: birds, fish

Preoccupied, to say the least

Yes, I have been preoccupied most of this summer.   Tremendous thunder and lightning rocked the area June 5 and started a small wildfire in an area of the Kenai Peninsula called Swan Lake.   Thus, that fire was denoted as the Swan Lake fire.


From a small fire in a remote area with no road access, it has grown to more than 162,000 acres and threatens two communities.   One, the first one threatened is Sterling, just five miles from the leading western edge of the blaze.   Heroic efforts seem to have halted the fire at the five mile line.


On the eastern edge, wildfire managers determined  several weeks ago, that the fire would burn into the mountains and run out of fuel as it reached the lichen and moss covered peaks.  Thus, personnel were pulled off the fire and sent to other fires burning in Southcentral Alaska.

High winds, lack of rain, and high temperatures (three days of 93 degrees at my home!) breathed new life into the eastern edge and the fire now is within three or four miles of Cooper Landing.   Many residents there have removed extra vehicles, boats, snow machines, trailers, etc., and stored them elsewhere.

Our days have been smothered with smoke.  Often, I cannot see the mountains that surround my property.

The fire is 12 air miles away from me.  That distance is increased when you consider that the fire would have to burn up a mountain and down the other side to get near me. I'm concerned, but not frightened.   I do, however, pay close attention to the daily reports from various agencies involved in the fire fighting.

So, yes, I've been preoccupied and have neglected this blog.   I'm also disappointed.   Two people have brought their home chest freezers to my yard and plugged them in to keep their contents safe from fire.

And neither one of them contains ice cream!!!

I have also been watching an injured American dipper near Tern Lake that somehow got its foot entangled in a twig.   It seems to be held in place by fine fishing line or hair.   One toe has already died and another appears to be turning black.

In the mean time, we are all--like this duck--praying for rain and lots of it!