Years ago, a couple local fellows complained about me to my husband.    They had spotted some windfall trees after a winter storm and the next morning they geared up to go cut them for firewood.   By the time they got there, they said, I was loading the last of the rounds into my truck.  Every time, they complained.

What they didn't mention, and what my husband knew darned well, was that though the fellows started out in the morning, they stopped at one of the local bars to fortify themselves for the chore ahead.  By the time they were well-fortified, those windfall trees were on their way to my wood stove.

But that was years ago.   Here's how it's done today.

Some things are better done in late fall or winter.   Some people don't know any better.

Count me among the latter.

That's why I spent the past couple days perspiring heavily, drinking gallons of water, and using a half roll of paper towels drying my face, all the while bucking up some spruce trees felled by my neighbor.   I was so anxious to get started with that, I forgot to take photos, even though I had a camera in the basket on my ATV. 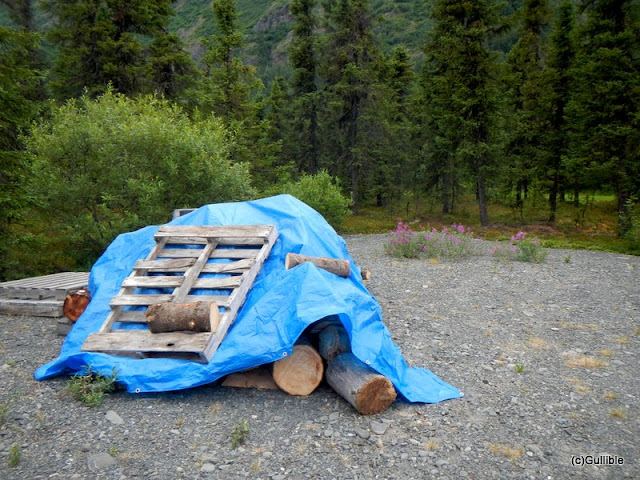 Yesterday I continued with this cold-weather project, fortified once again with water and paper towels. 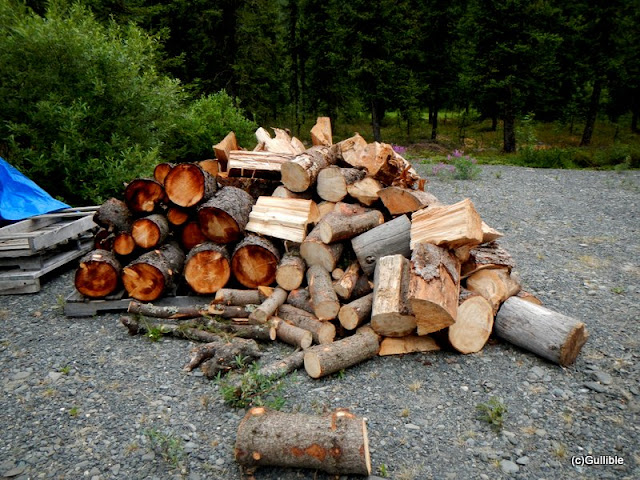 You can tell the old, seasoned wood from the new, green wood just added to the pile. 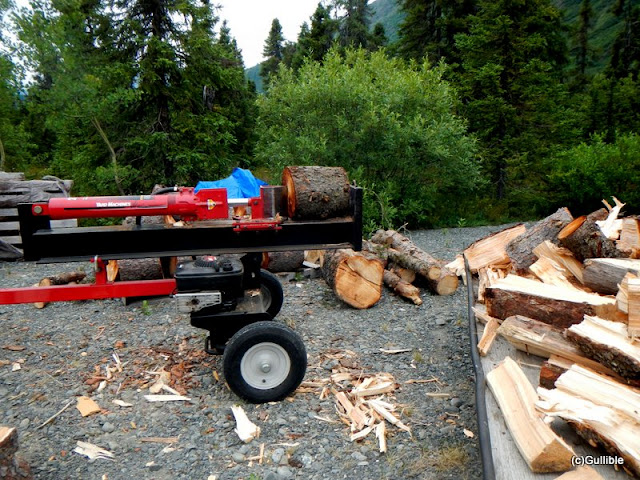 The process of splitting the rounds into pieces that will fit in the woodstove.   This is the fun part.   Actually, it's all fun.   (Ed. Note:   Not all Alaskans think firewood gathering is a "fun" chore.   Some have been "affected" by living too long under the rays of the Midnight Sun .) 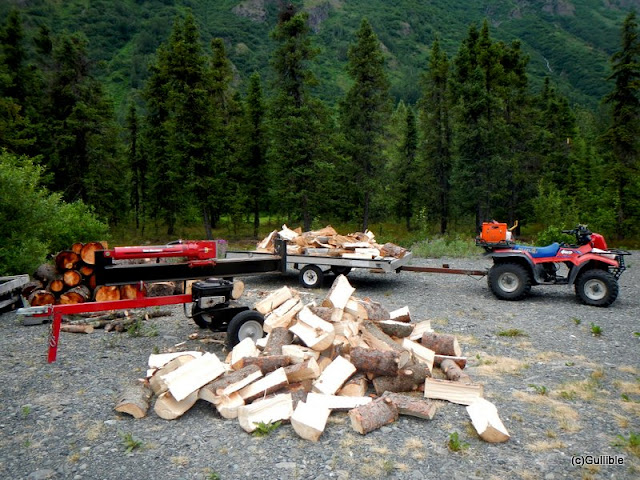 Seasoned wood split and loaded on the trailer, green wood split and on the ground.   I'll stack them in different places in the woodshed.   That's my project for today.

All the while I was doing this, I was entertained by a cute little yellow helicopter landing and taking off, apparently giving rides to guests at a wedding taking place at a  nearby inn. 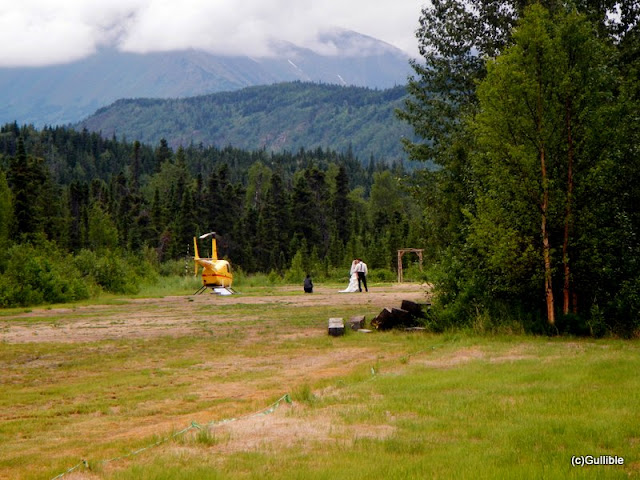 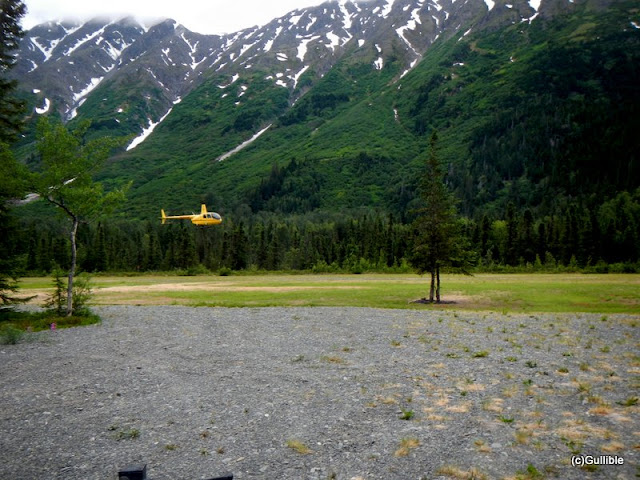 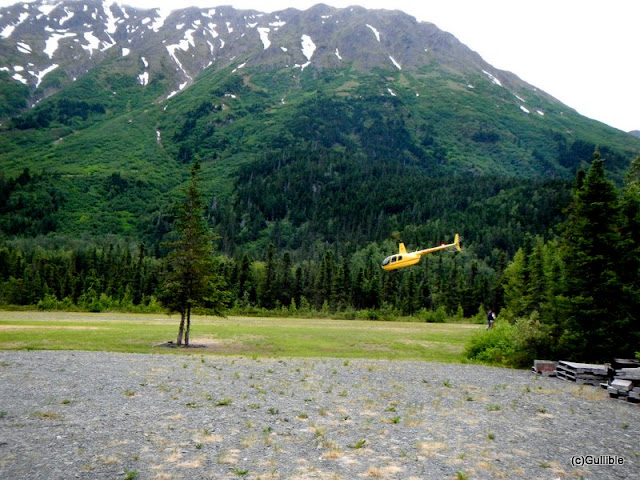 Not all Alaskans engage in this firewood chore.   Some lead lives that appear normal to folks who don't live in Alaska.   They have homes and condos and apartments with no wood-burning apparatus (apparatuses?   apparati?) of any kind, hence they have no need for firewood, but they are the ones who scream the loudest when the electricity goes out in winter and their furnaces won't work.

Some of those folks might want firewood to take camping so they can have a campfire.   Assuming, of course, that they have secured said wood securely on whatever vehicle they transport it.

The unsecured wood?   I pick it up alongside the highway when I'm picking up litter.   Can't let a good piece of firewood go to waste.


The instruction manual for my camera recommends against pointing the camera at the sun, lest damage result.

Because I always follow instruction (;>o), I didn’t aim my camera directly at the sun.  I aimed it at something between the camera and sun.  That counts, doesn’t it?

I’ve done this before, using the sun for backlighting, but lately I am obsessed with photographing flowers in this manner.  Thus:

Now that I think about it, this isn't an entirely new obsession:


And, I am not above using the moon, either: 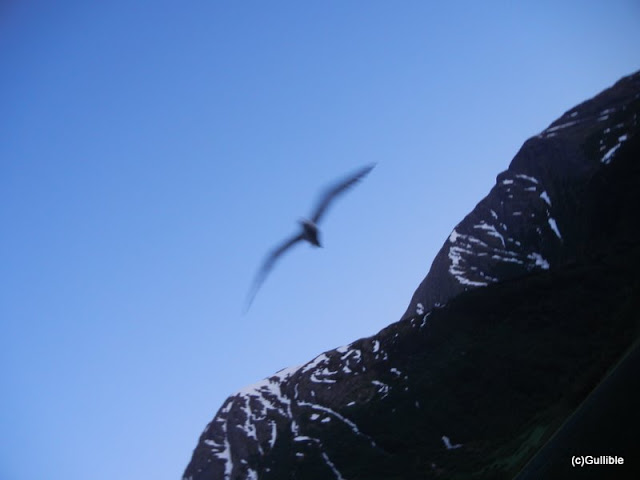 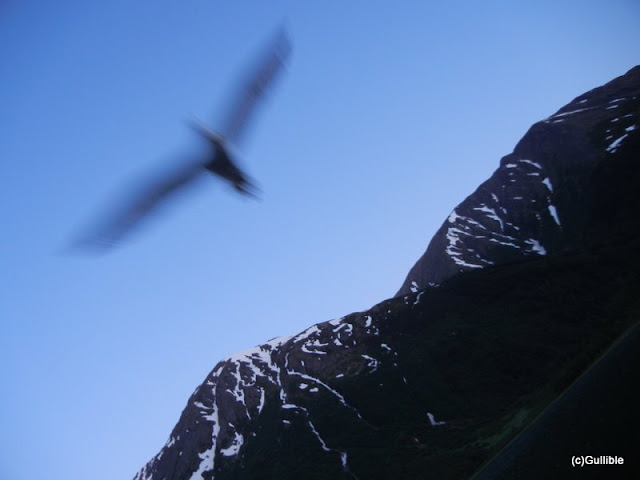 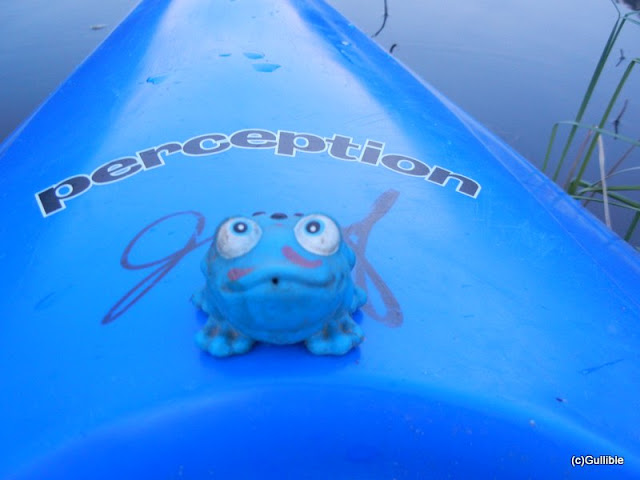 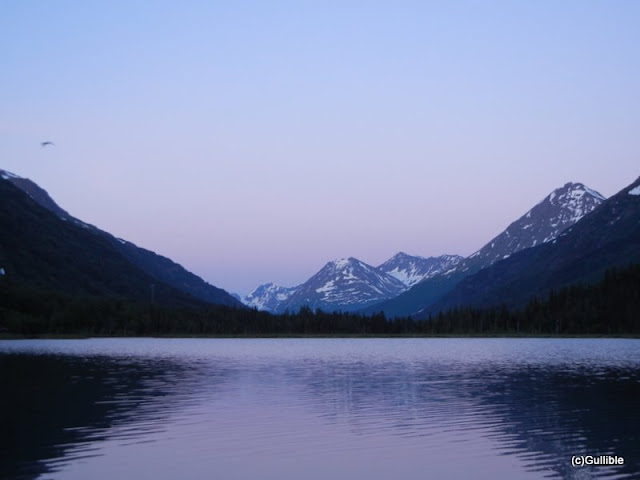 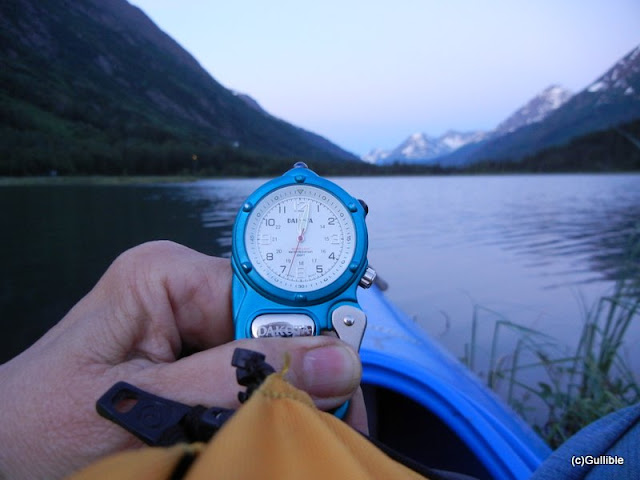 On Supermoon Weekend, It's All about the Midnight Sun

So there's supposed to be this fantastic moon this weekend and tonight, a moon that works its magic on the tides and creates the largest bore tide of the year at Turnagain Arm.   The crazy bore tide surfers will be out there riding that wall of water that moves at 15 to 20 mph.


Closer and brighter, they say about the Supermoon.  Would have been nice to have seen it.  Unfortunately, it hid behind clouds in this area.   For us in Alaska, though, it was upstaged by the sun--the Midnight Sun.


In Anchorage and Fairbanks, baseball games were played at midnight with no artificial light.  In Anchorage, it was two Alaskan teams, so no big deal.   But in Fairbanks, the locals played a team from San Francisco and I'll bet those guys were amazed.   The TV sportscaster was wearing sunglasses on the 10 o'clock news.

Officially, we had 19 hours and 21 minutes of daylight at the Solstice.  Unofficially, it just doesn't get dark.  Around two-ish in the AM, it's kind of twilighty.

I love it when tourists ask, "When does it get dark?"

Sound odd?   Not to me, not after 65 years of living here.  This is normal for me, and I love it!  It makes up for all the darkness during winter. 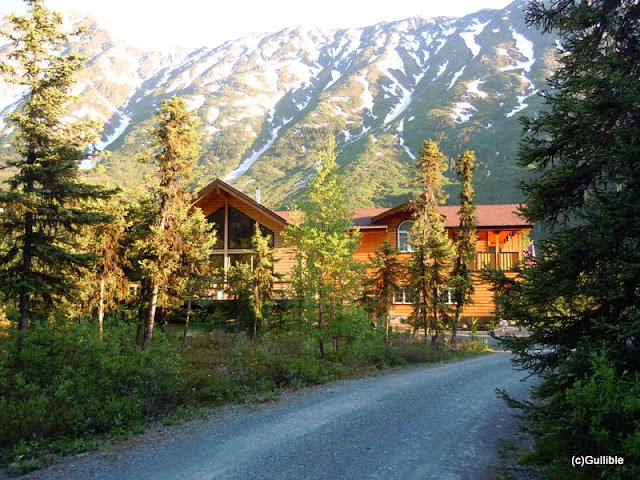 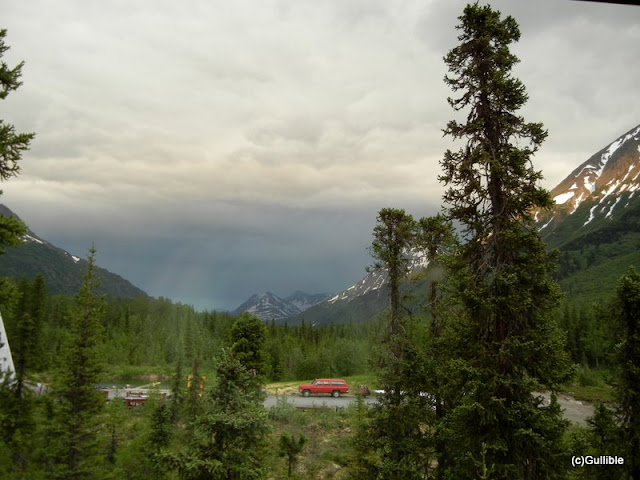 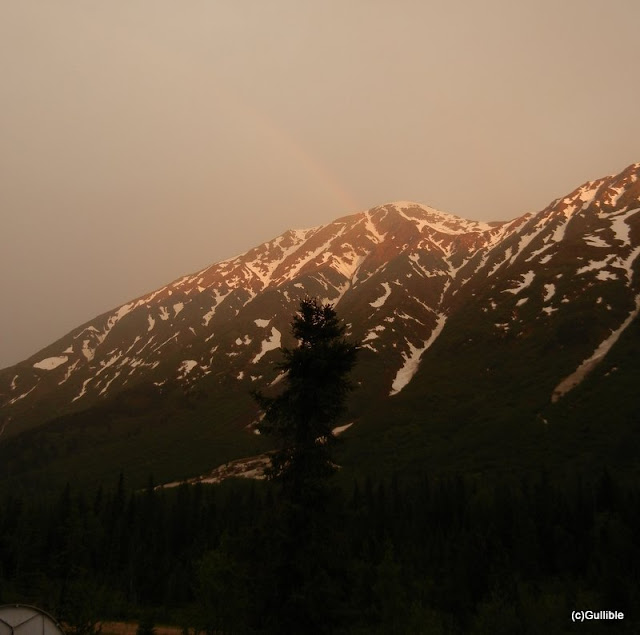 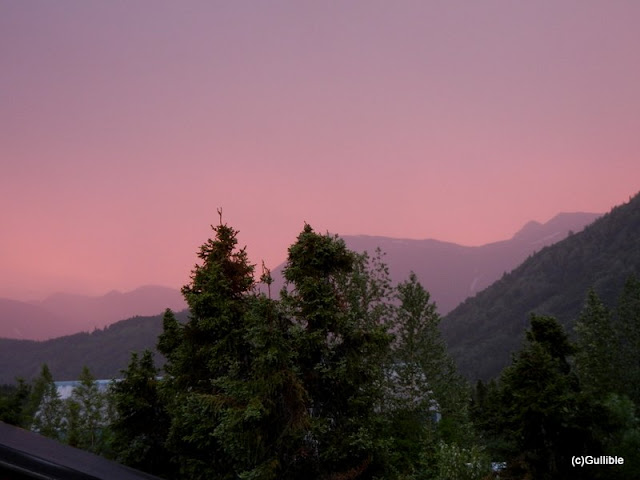 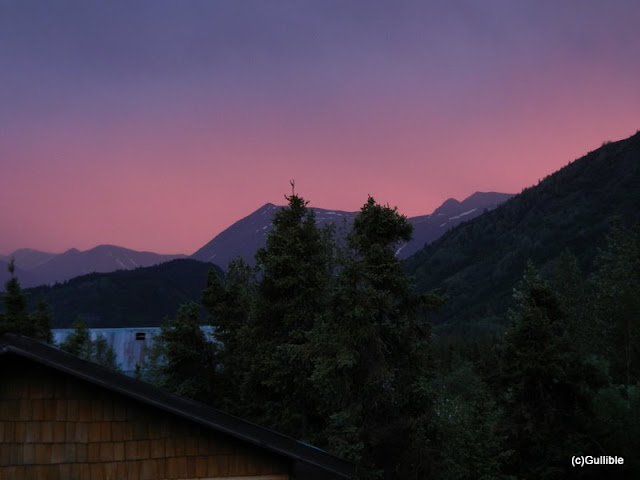 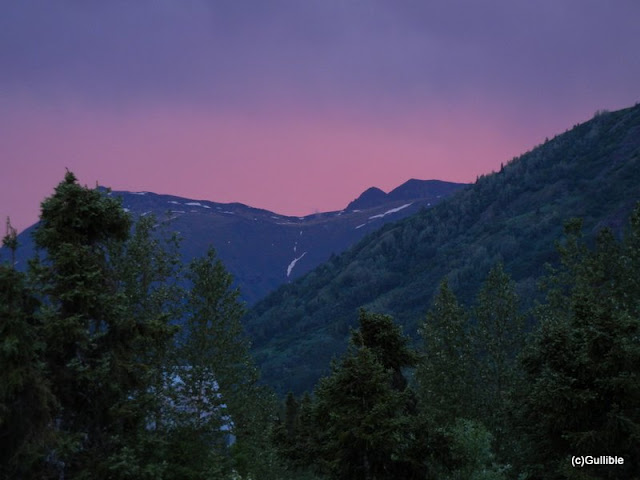 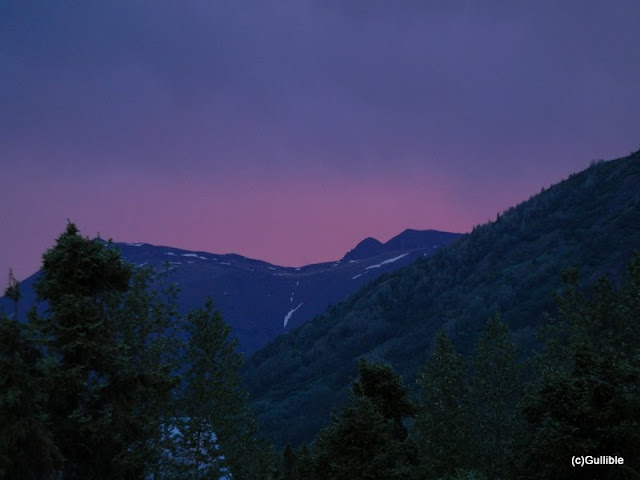 Hard to stay in bed with that Ol' Midnight Sun putting on a show like this, and obviously, I didn't.
Posted by Gullible at 9:00 PM 2 comments:
Email ThisBlogThis!Share to TwitterShare to FacebookShare to Pinterest
Labels: sunset
Newer Posts Older Posts Home
Subscribe to: Posts (Atom)