Cooling Off at Tern Lake

Yesterday was way too hot for this long-time Alaskan.  Ninety degrees is almost unheard of in this area which is influenced by coastal weather, but still in the mountains.    This is Fairbanks weather, not Kenai Peninsula weather. 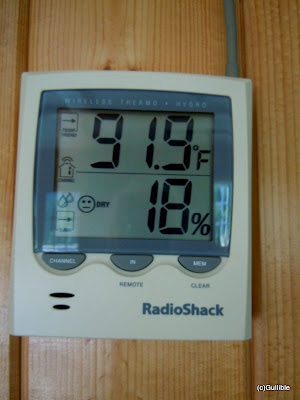 After hiding in the house most of the day, which really didn't do much good because I had all the windows open and it was almost as hot inside as it was out, I loaded the kayak in the truck and went down to Tern Lake. 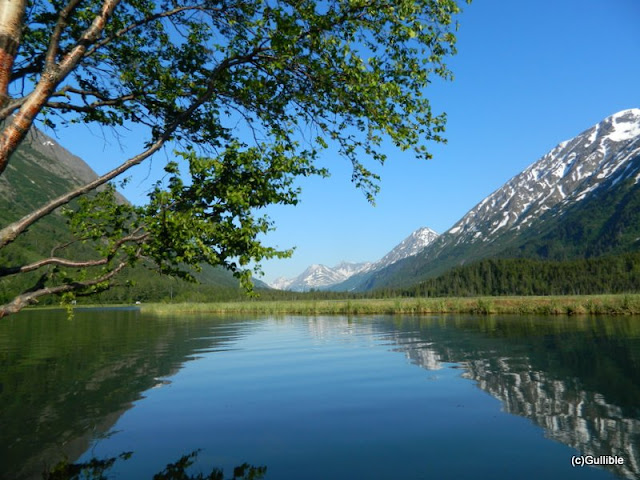 This my favorite place to kayak.   There's an abundance of birds nesting here, tiny flowers on the islands, and it's close to home.

This (above)  is the most scenic third of the lake. 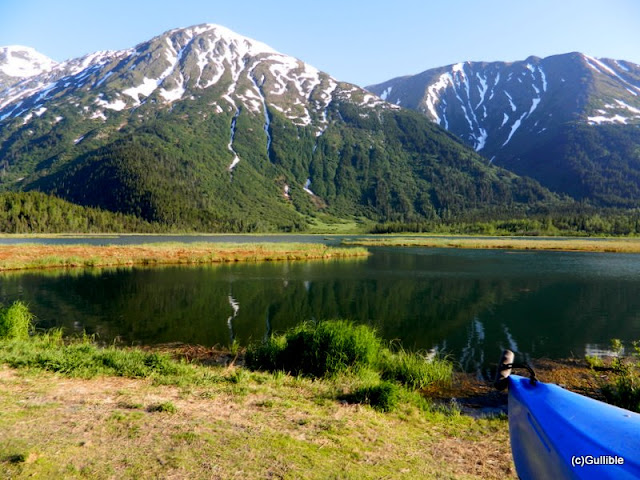 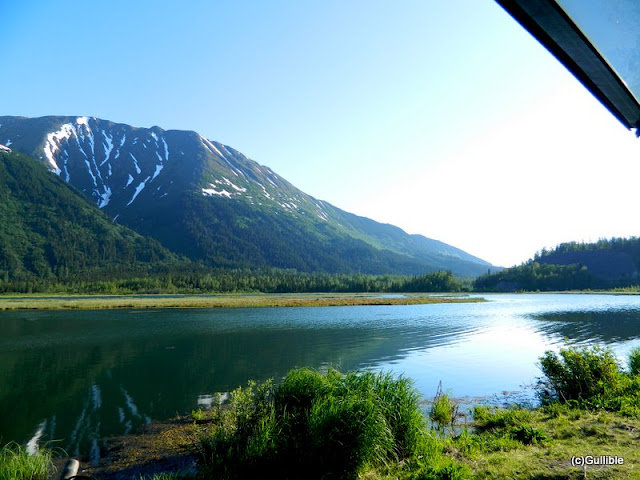 and the last third.   The middle and last portion are where I aimed my kayak.

I paddled close to the islands, taking photos of the tiny flowers and snagging assorted floating litter that  blow out from the parking area onto the lake during the winter.

At the far side, I checked on the beaver lodges.   There are two, though one looks big enough to be a beaver condo.   I haven't seen any sign of beavers for two summers and I suspect they've been trapped. 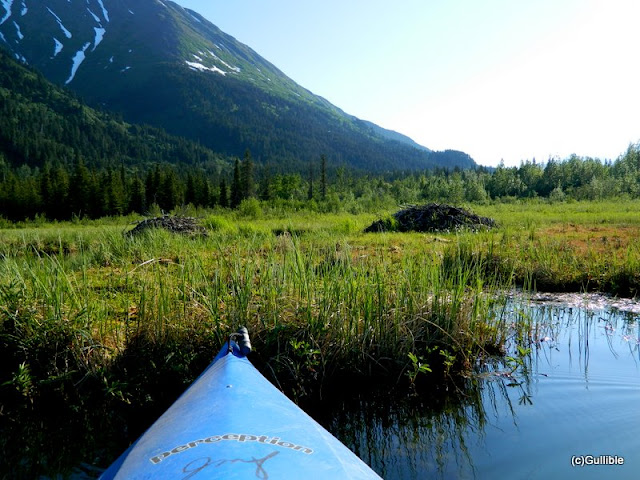 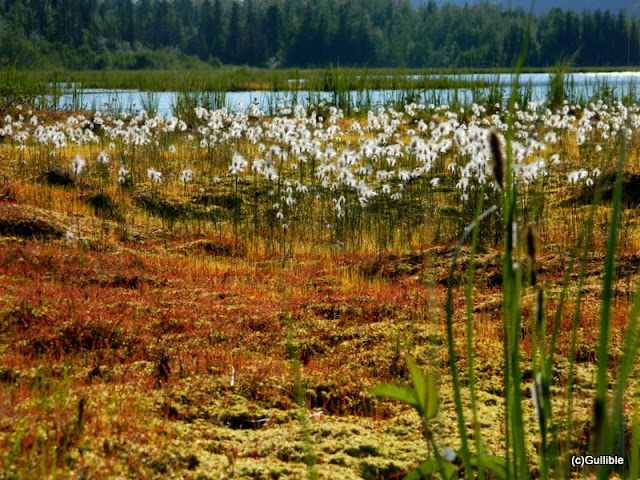 More cotton grass while heading back to the truck. 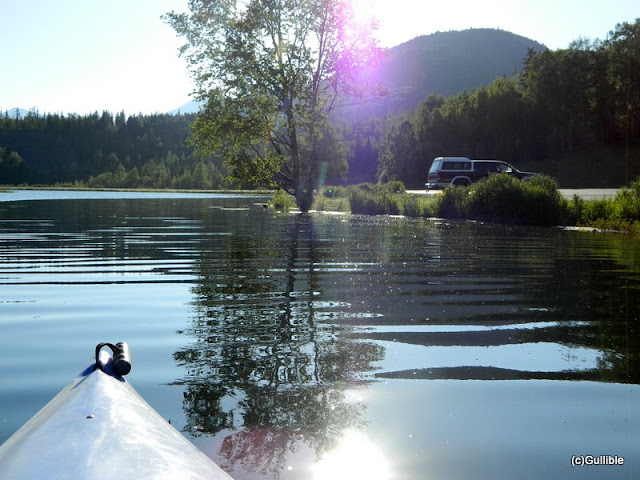 I dodged Arctic Terns and Mew Gulls that were telling me I was too close to their nests.  One almost got me with an explusion of white stuff that landed right beside my kayak.

And I found the perfect place to get out of the kayak.  Not as agile as I once was, it's hard to get out because my butt is lower than my feet while I'm in the kayak and even lower when I jam the bow onto land.  I need a place where I can lodge the kayak so it won't tip over while I'm trying to get safely ashore. 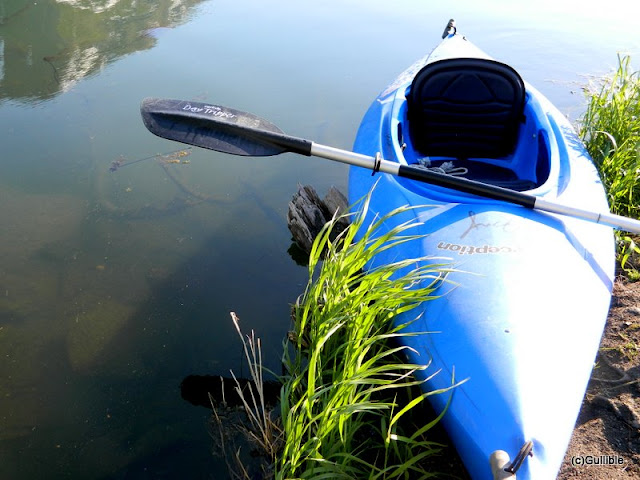 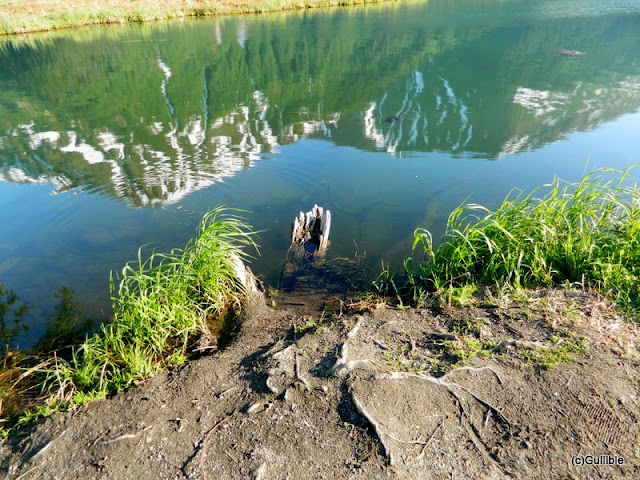 In fact this was the best place ever.  I jammed the kayak in between the shore and the stump and all was well.   The upper part of this photo is the reflection of the mountain across the lake.

It was the perfect place to spend a couple hours.  A gentle breeze across the water kept things cool and comfortable for shorts and tank top.  There were no bugs on the water, even though we are experiencing one of the worst mosquito seasons in memory.   Ashore there were white sox and no-see-ums, so I lingered long enough to take a photo of Bluebells blooming in the Wild Rose hedge along the shore. 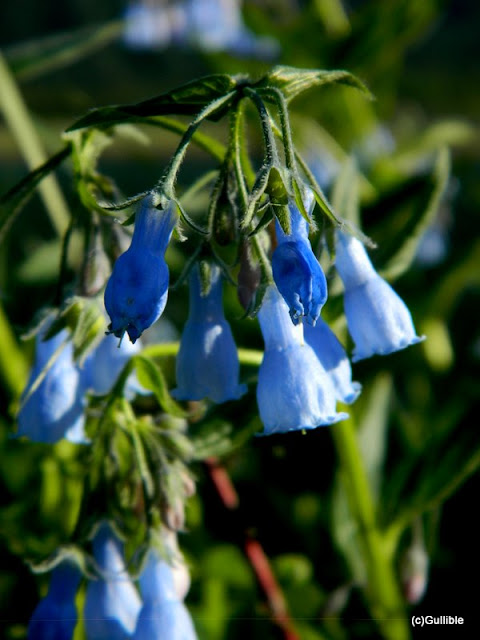 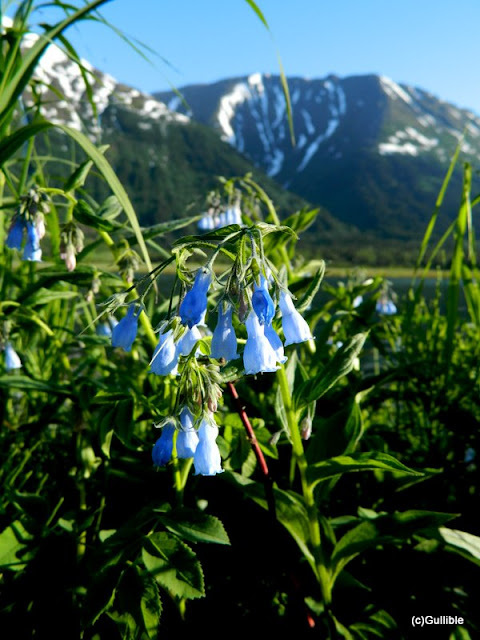 Perfect.   Absolutely perfect way to escape the heat.
Posted by Gullible at 6:53 PM