The Good Lord Willin' and the Creek Don't Rise

That interminable winter we had has caused all sorts of problems here in Alaska.  Besides throwing us into depression and causing outbreaks of cabin fever,  far more serious consequences have plagued the villages and towns along major riverways farther north than where I live.

Temperatures stayed cold, and we even had snow in late May.  Migrating waterfowl found lakes still covered in ice.

Then a high pressure system bullied its way in and temperatures suddenly soared into the 80s.   Overnight, it was summer.   Tiny chilled leaf buds exploded.  Apparently we skipped spring altogether.

Large rivers thawed far too quickly.  Massive blocks of ice, propelled by the undercurrent but held back by the thick layer of ice on top of the water, jammed up into huge ice dams.   Villages upstream were flooded,  and the blocks of ice--driven onshore by the tremendous hydraulic power, scraped the riverbanks clean of any structures in their path.

The village of Galena on the Yukon River, to name just one affected, has on-going flooding problem and its residents have evacuated to other areas.  Electricity has been out for days, causing frozen meat to thaw and spoil.  That has created another problem--the threat of bears coming into town.

Because the road to the dump is under water, there is talk of using a helicopter to remove the "bear bait" and deposit it at the dump.

Closer to home, that sudden rise into unusual temperatures in this region has caused rapid melting of snow, resulting in rising levels in creeks, streams, rivers, and lakes.

Down at Tern Lake, a pair of Red Necked Grebes apparently thought they were nesting on lakefront property. 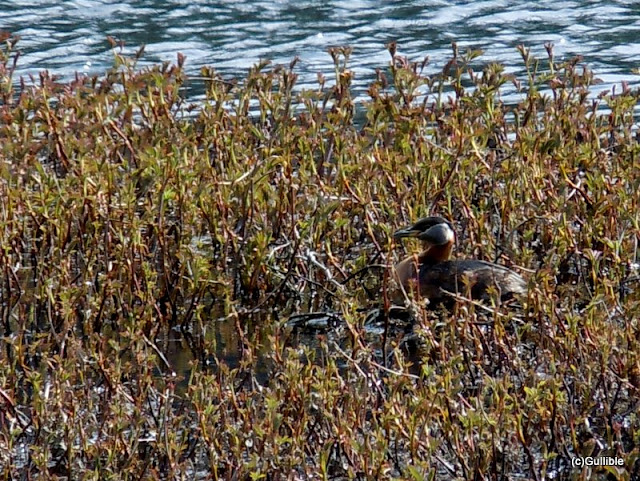 They certainly had a scenic view for raising theirs ducklings.

Then came those hot, hot days and they found themselves nesting IN the lake. 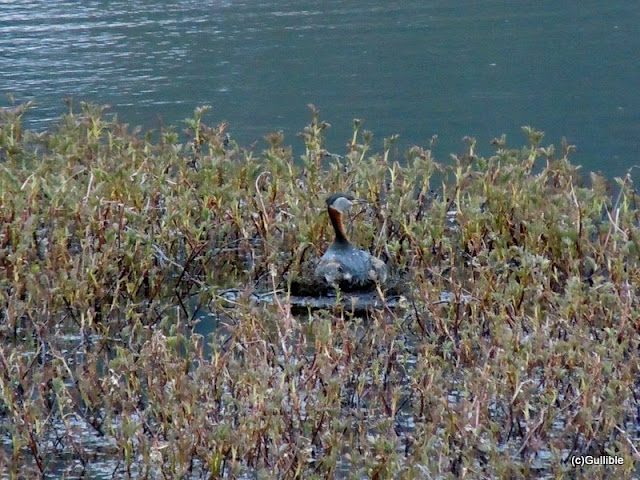 A closer view yesterday shows they had the sense to build a mud dike lined with grass and all seems well, but there's still a lot of snow up on them thar' mountains.  Cooler temperatures have slowed the melting, otherwise Mrs. Grebe might float right off her nest.

But all is not well for the Grebe family. 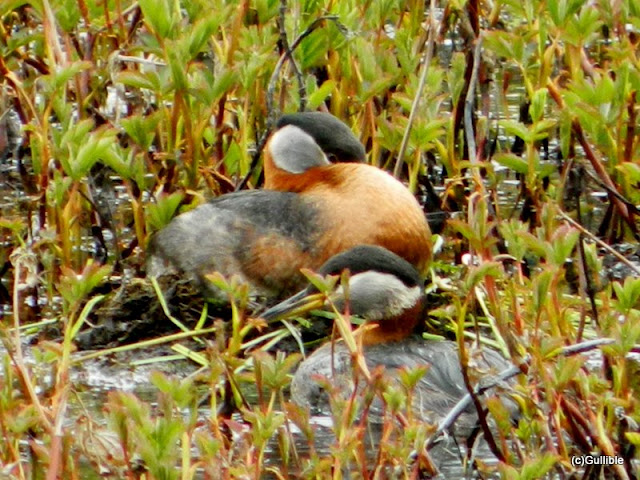 Nature isn't kind.   At times it's downright dangerous.   A hundred feet down the road from this nest that's way too close to the highway, there is bear scat left by one of two juvenile brown bears.  Some  little duck eggs would taste mighty fine to one of them.