The 2nd Fur and Feathers Journals, Ch. 2, In which the bears dine on shellfish

Chapter 2
In which the bears dine on shellfish


I will always remember the first time I went to the beaches of the Kenai Peninsula to dig for razor clams.  This was sometime in the late 1960s.

The first thing I did wrong was go in April.   It was cold and windy.

The second thing I did wrong was not wear rubber gloves.  When we finished, my hands were a mess of sand-impacted, ruptured blisters and cuts from the clam shells. There's a reason they're called "razor" clams.

The third thing I did wrong was wear only knee-high rubber boots.  I was salty, sandy, wet, cold, and miserable.

After that, I never went until May, wore rubber gloves duct-taped to the sleeves of my jacket to keep out the sand, and donned chest waders.

The bears of Silver Salmon Creek don’t care about such things.   They just want food.  Until mid-summer, razor clams are the bears’ source of protein.

Early in the misty morning rain, we load up in the carts and Rick takes us across the river to the beach to photograph the bears digging for clams. 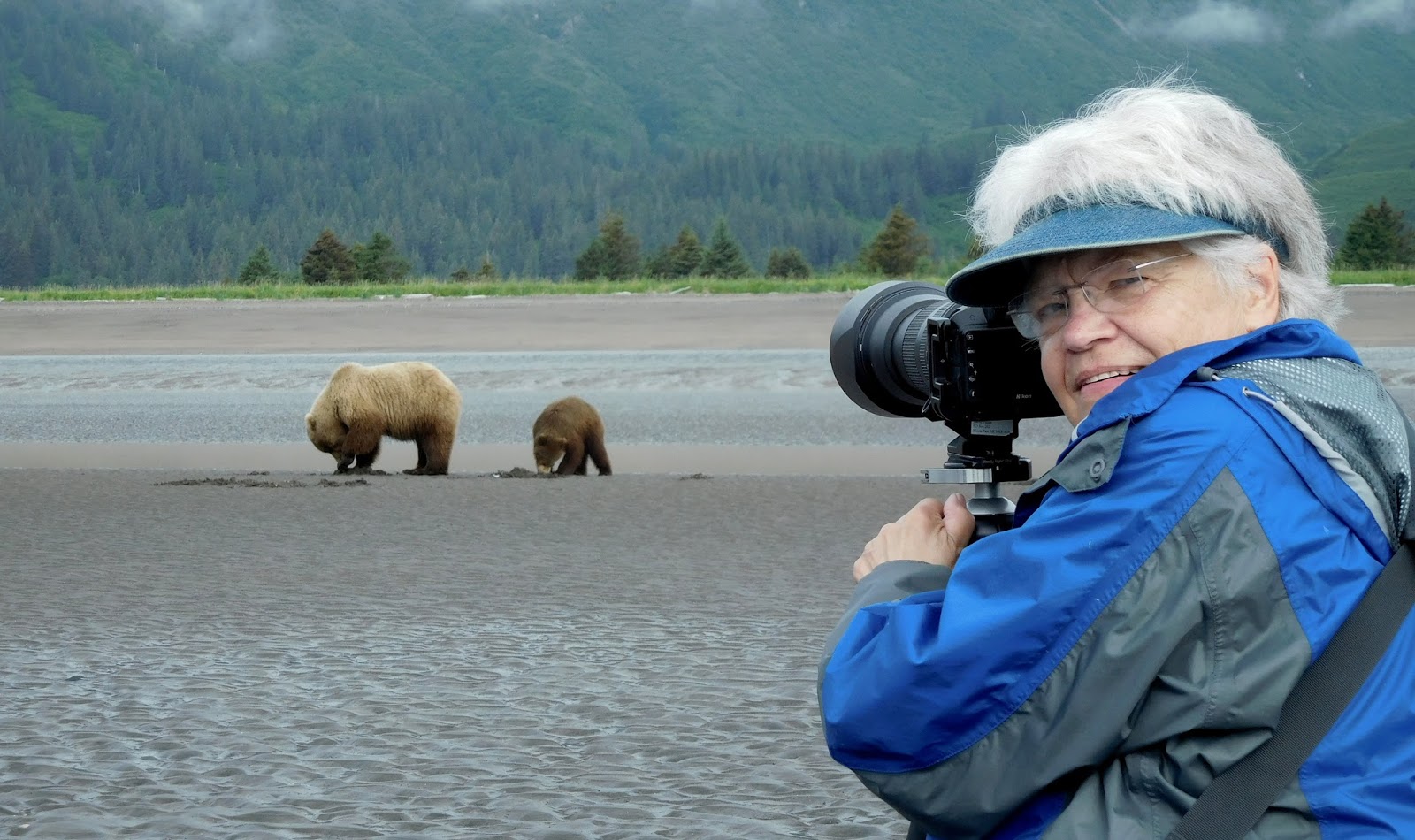 This morning a sow with two second season cubs is having clams for breakfast.   One cub glues itself to mum, hoping for something to eat.   The other goes off to dig on its own. 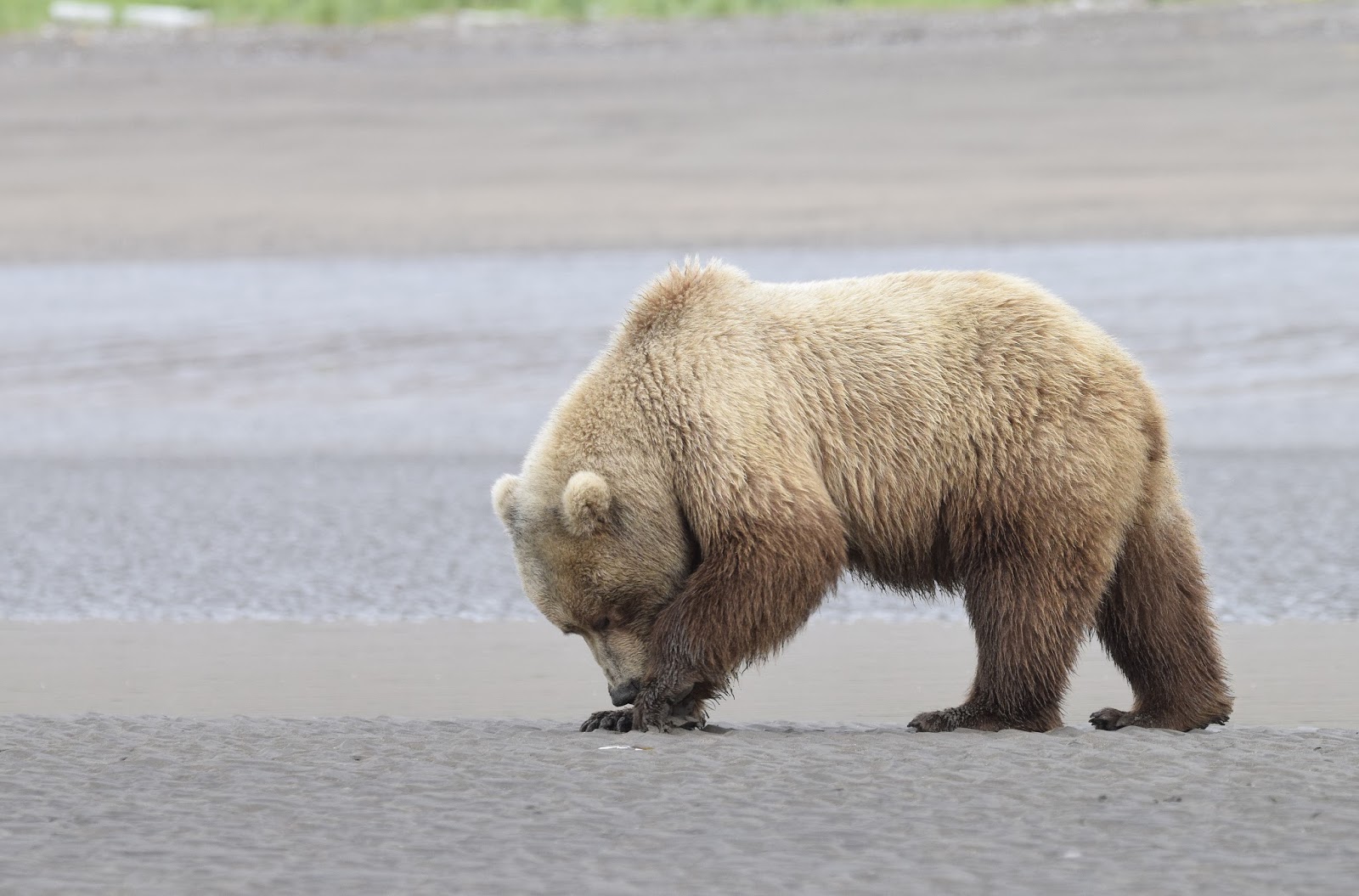 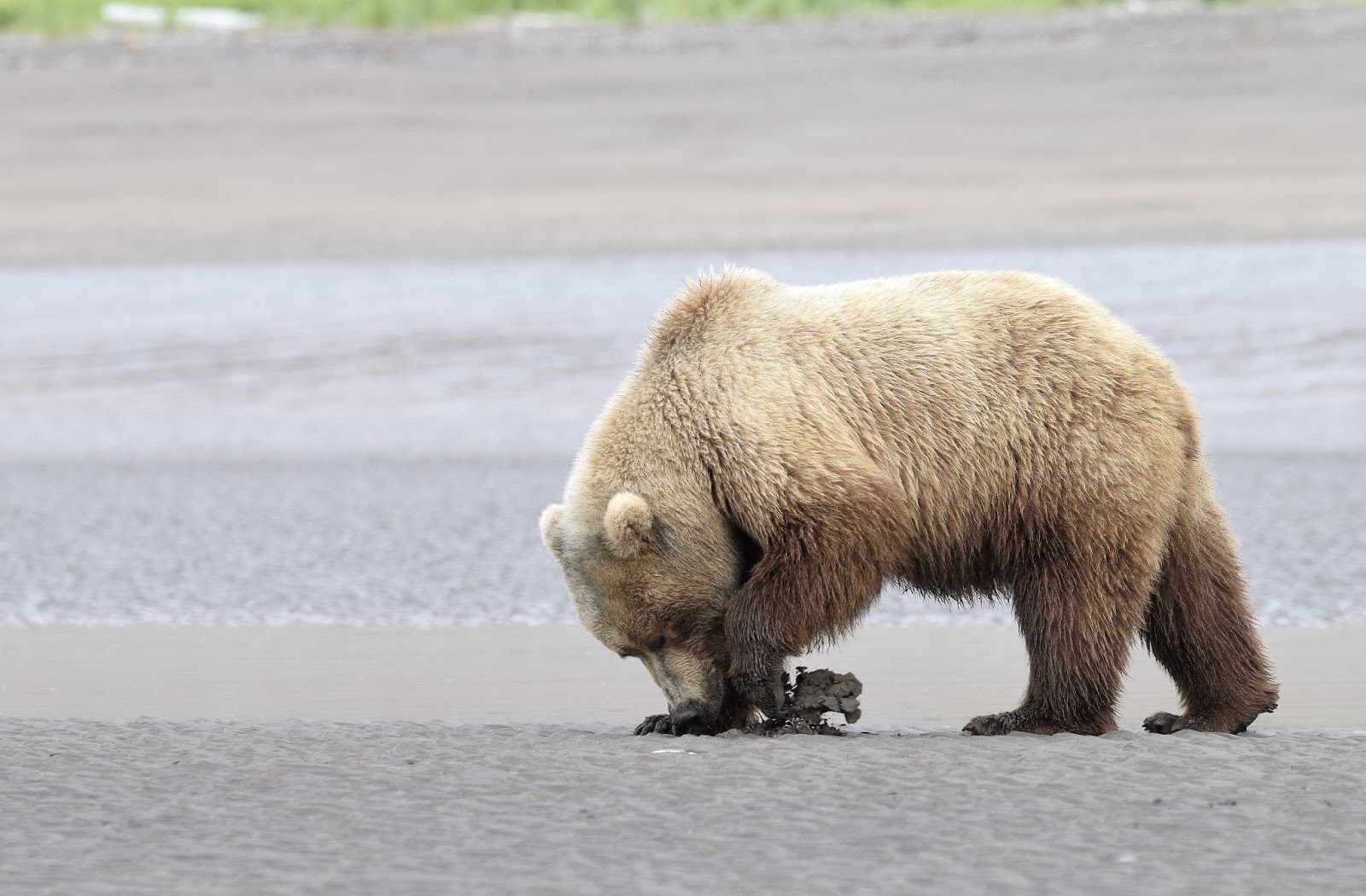 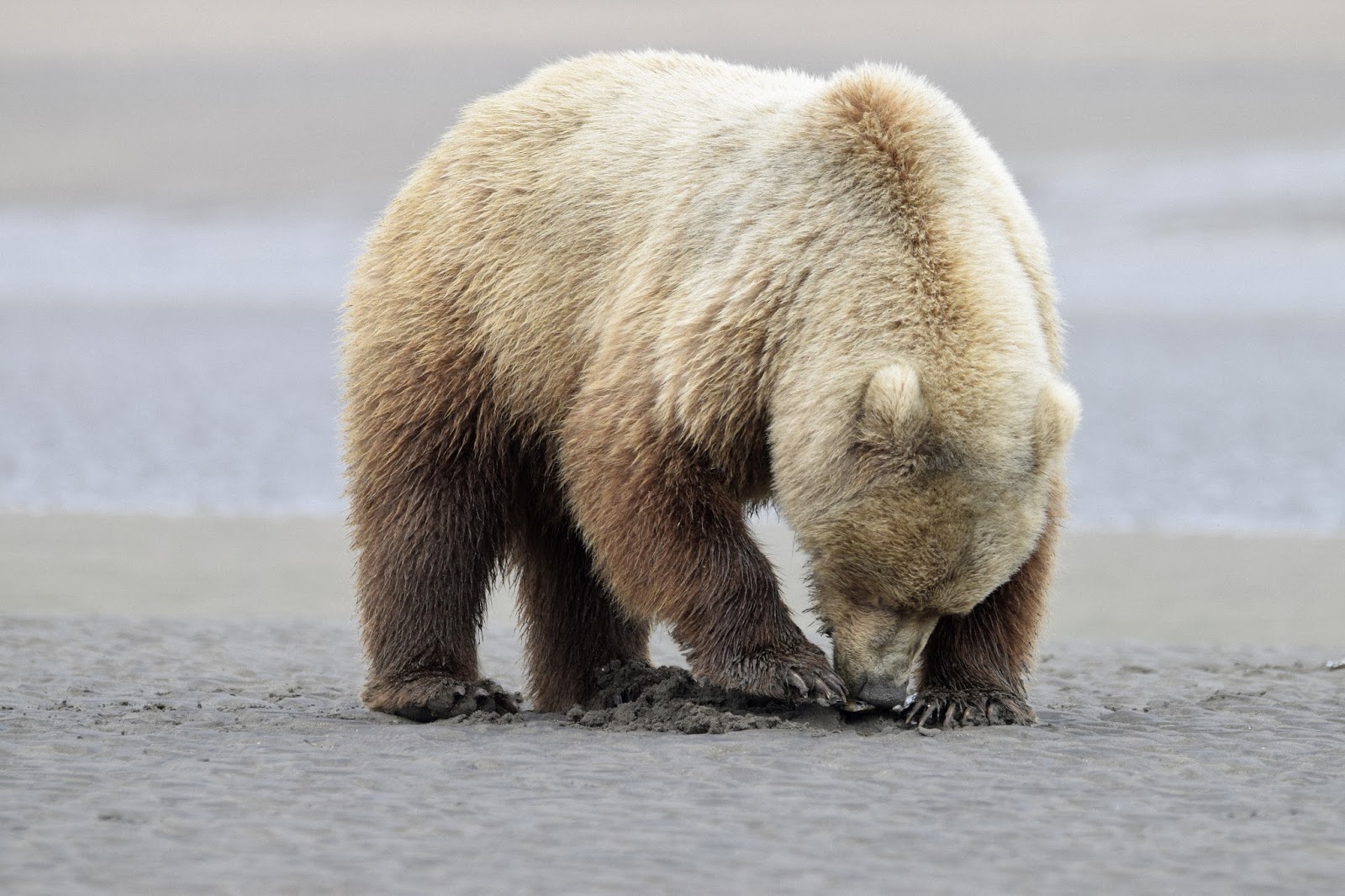 “That’s what I look like when I’m digging clams," I say to Rick as I point at the other cub with one foreleg on the silty beach as it digs with the other. 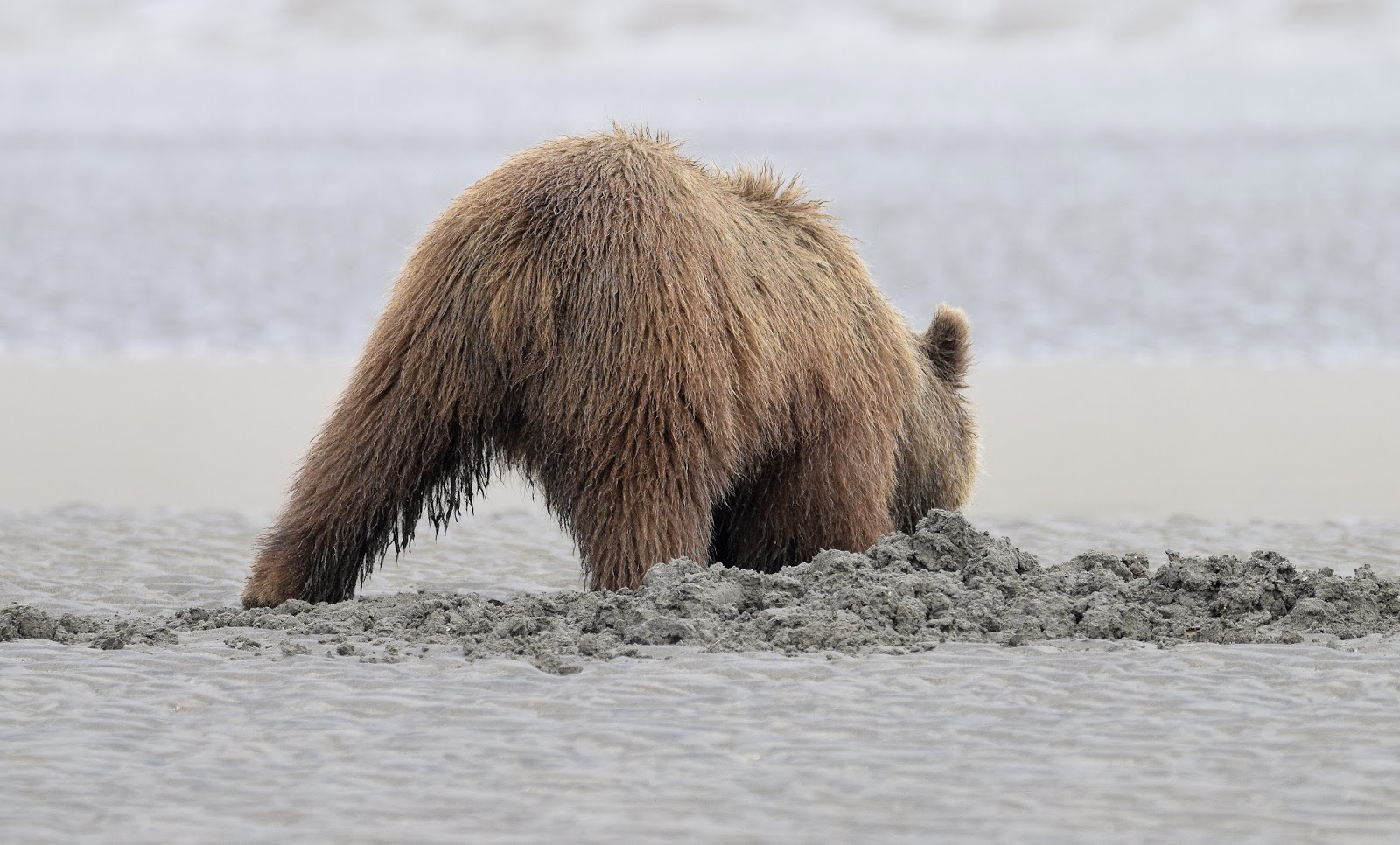 The cub lacks the finesse of the adults, but he’ll learn.

Mum digs the silty sand with one huge paw until the clam is exposed.   Before it can escape, she ever so carefully reaches into the hole and lifts the clam from the sand.    That movement is so deliberate and delicate, I can tell each time she has chased and caught up with the razor clam.  I say "chased" because that's exactly what you have to do.   The most tender part of the clam is its foot, shaped something like a boot.   It can dig so quickly with that foot it often escapes.   Savvy clam diggers dig beside the clam and hope to pluck it from the wall of their excavation before it gets away. 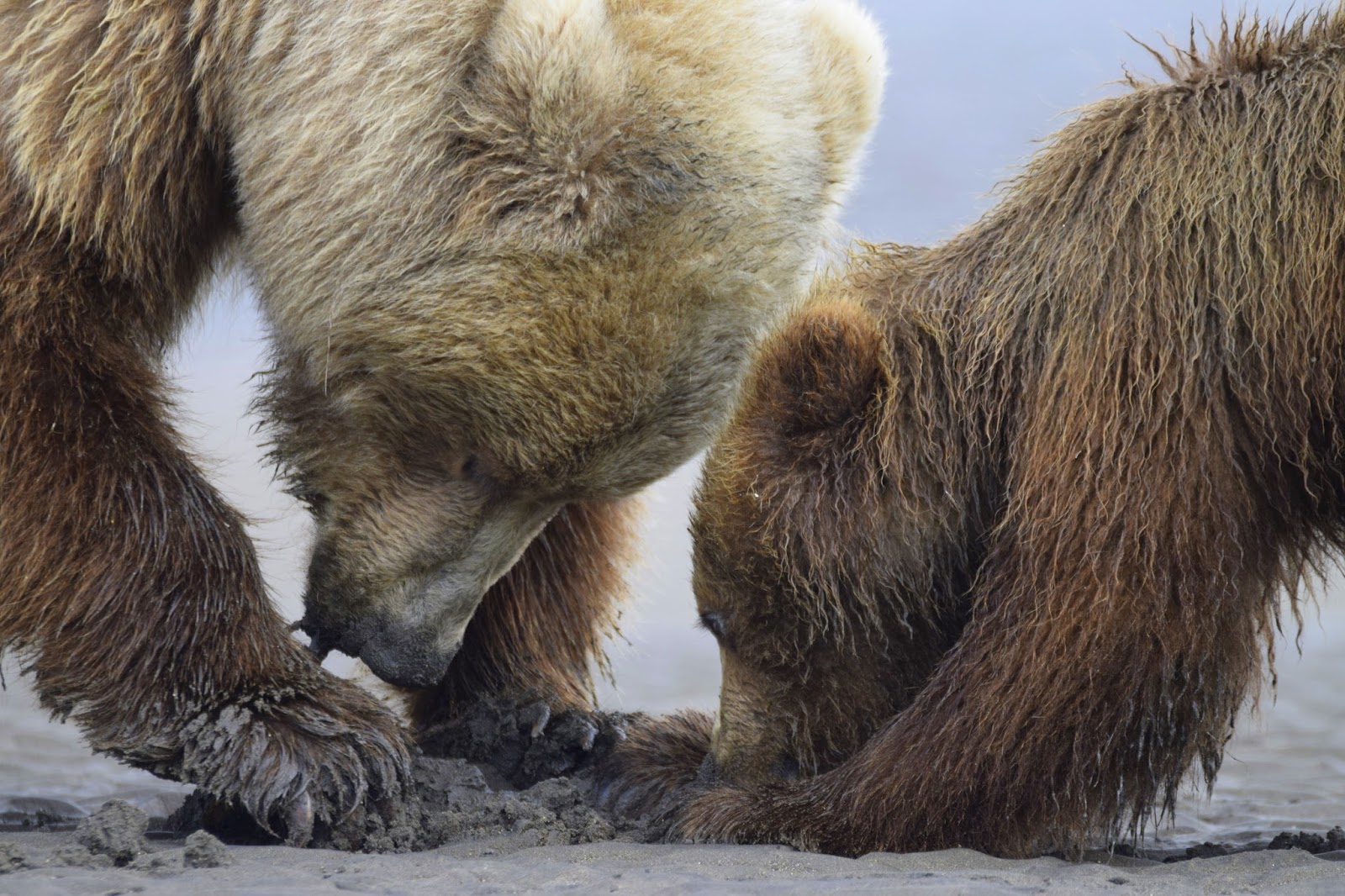 The, she spreads her claws and, using only the first one, pries open the sharp, delicate shell.  And there it is—razor clam on the half shell. 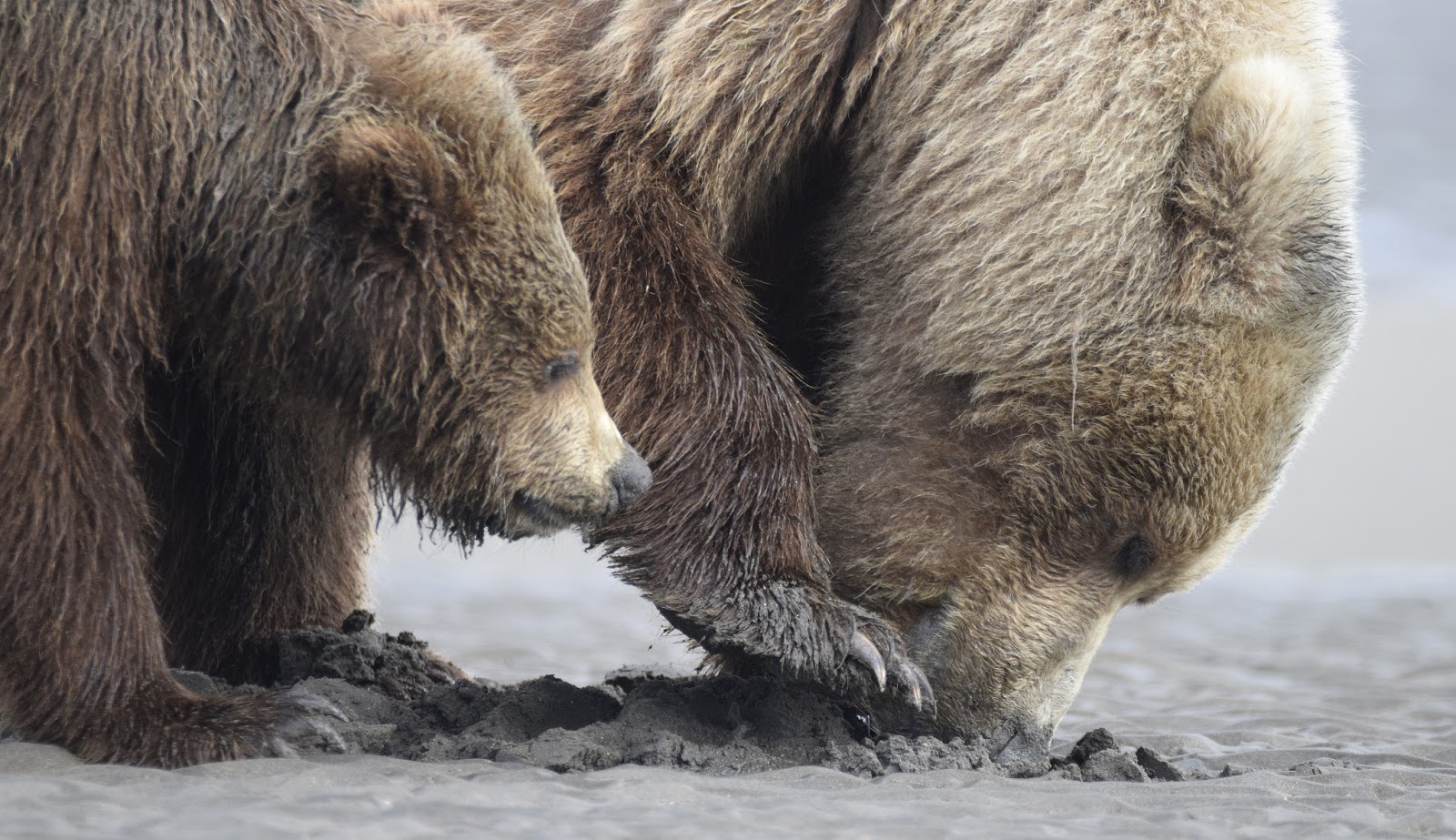 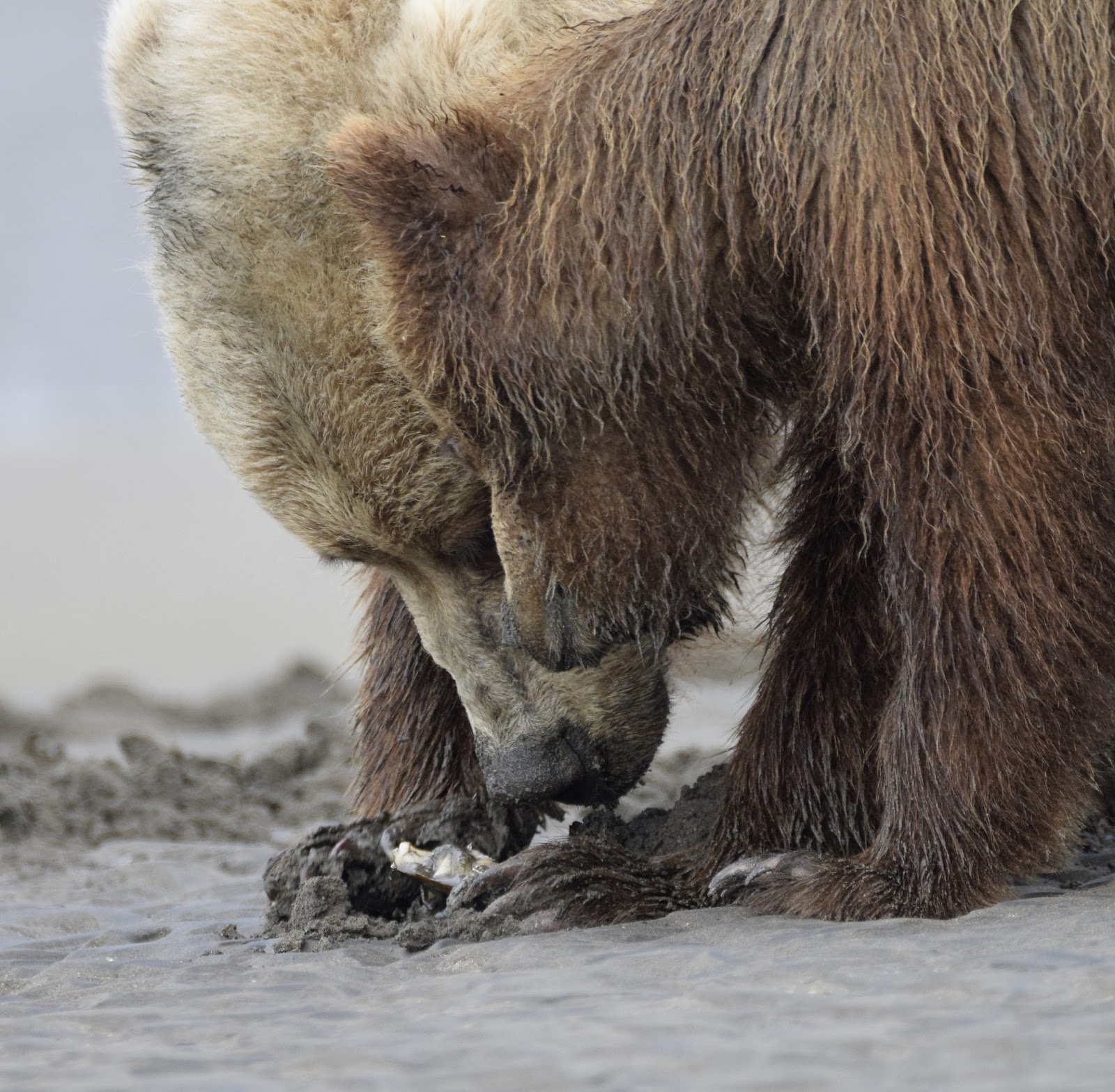 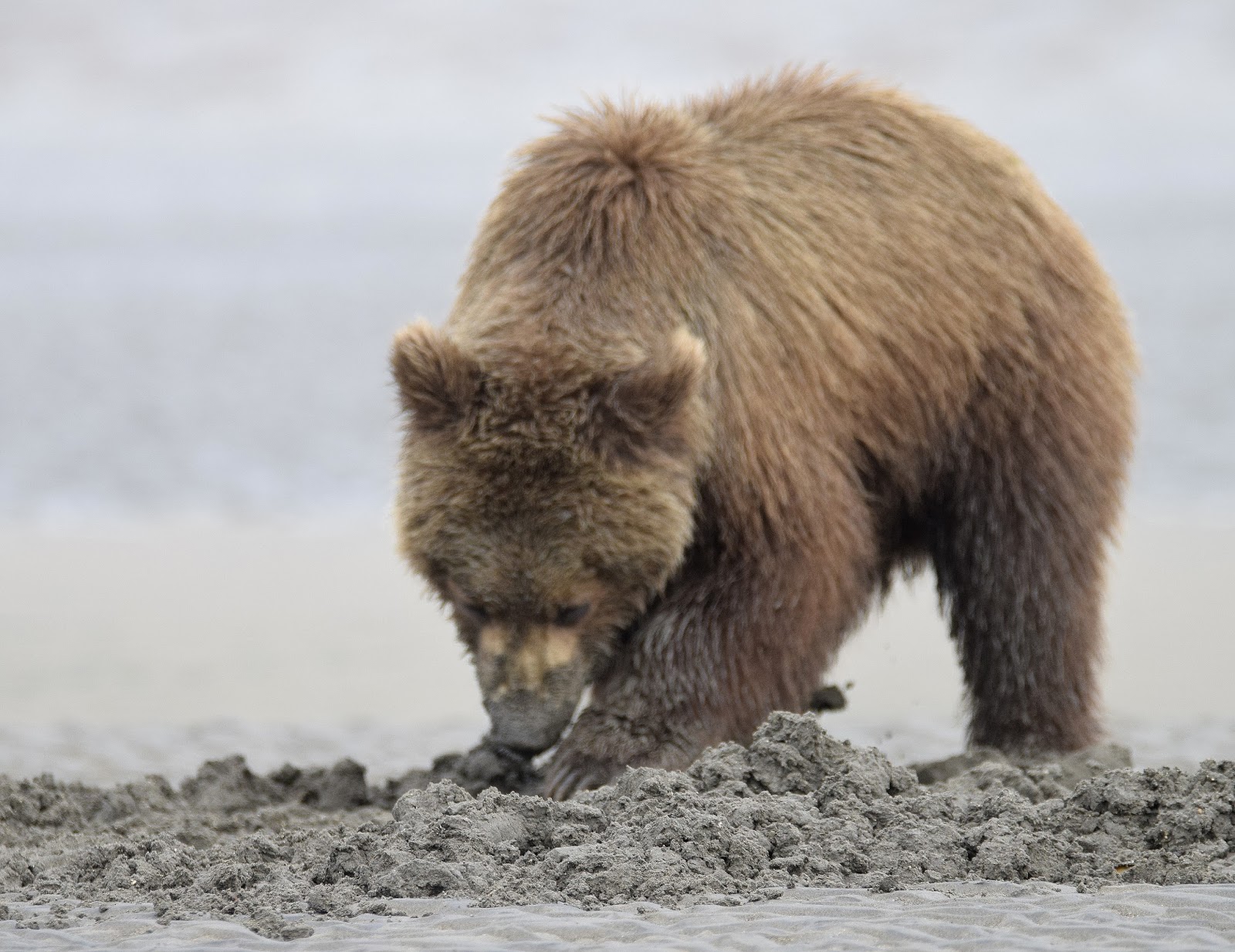 Mum finds another clam and repeats the whole procedure. 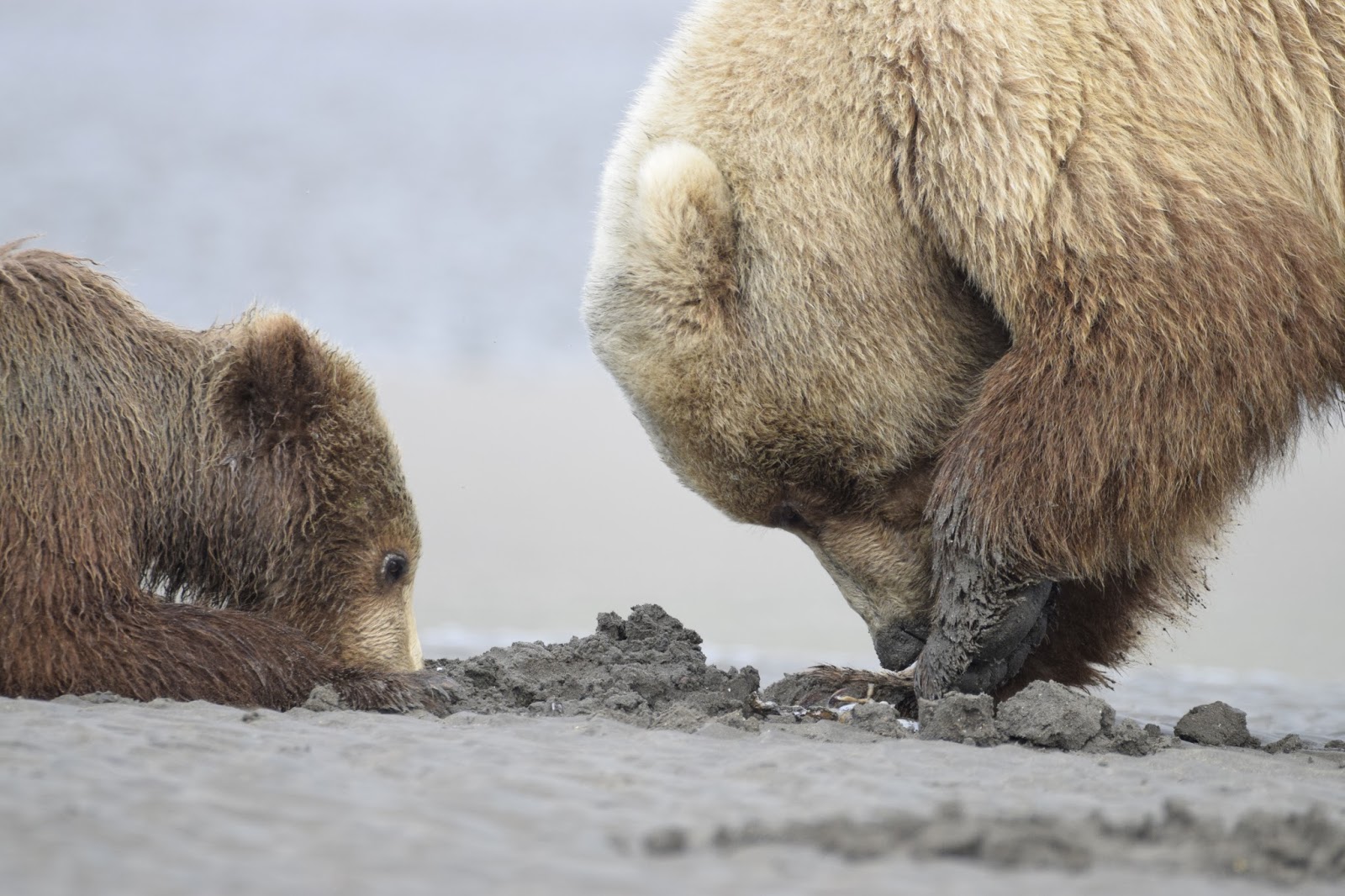 Meanwhile, back at the excavation site…. 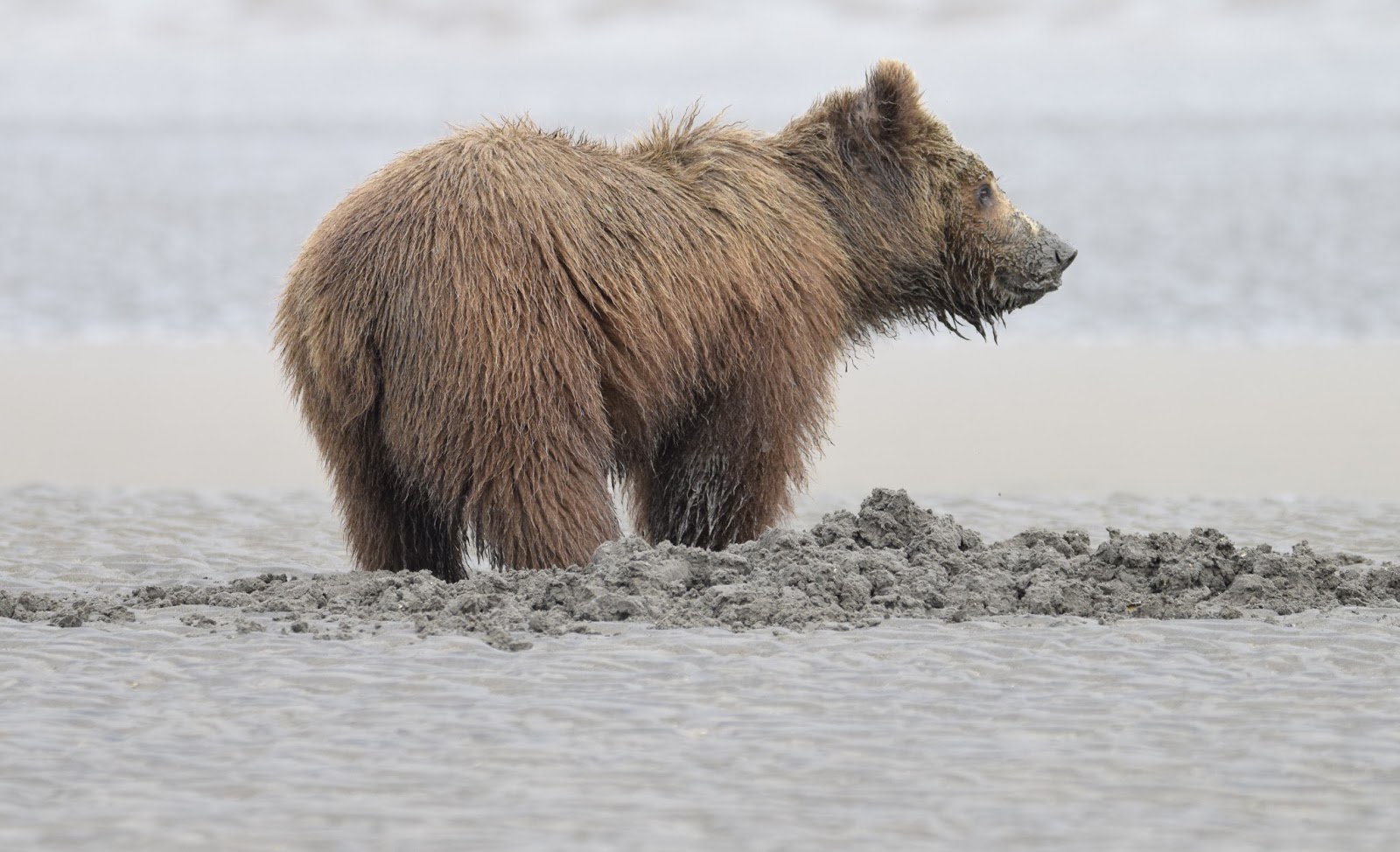 Dependent cub continues to beg.   Glaucous gulls wait for a chance to make sure there aren’t any goodies left in the shells. 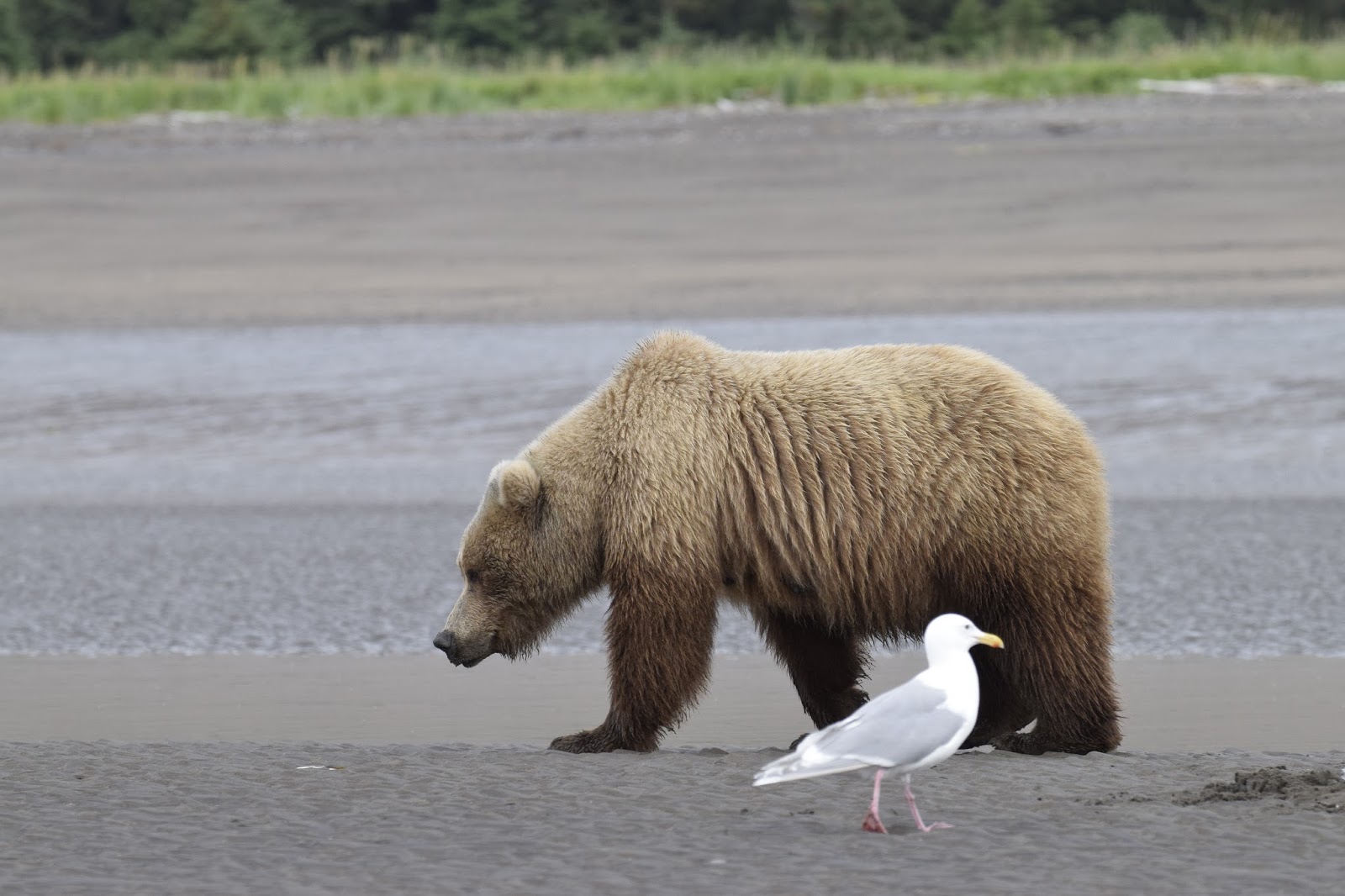 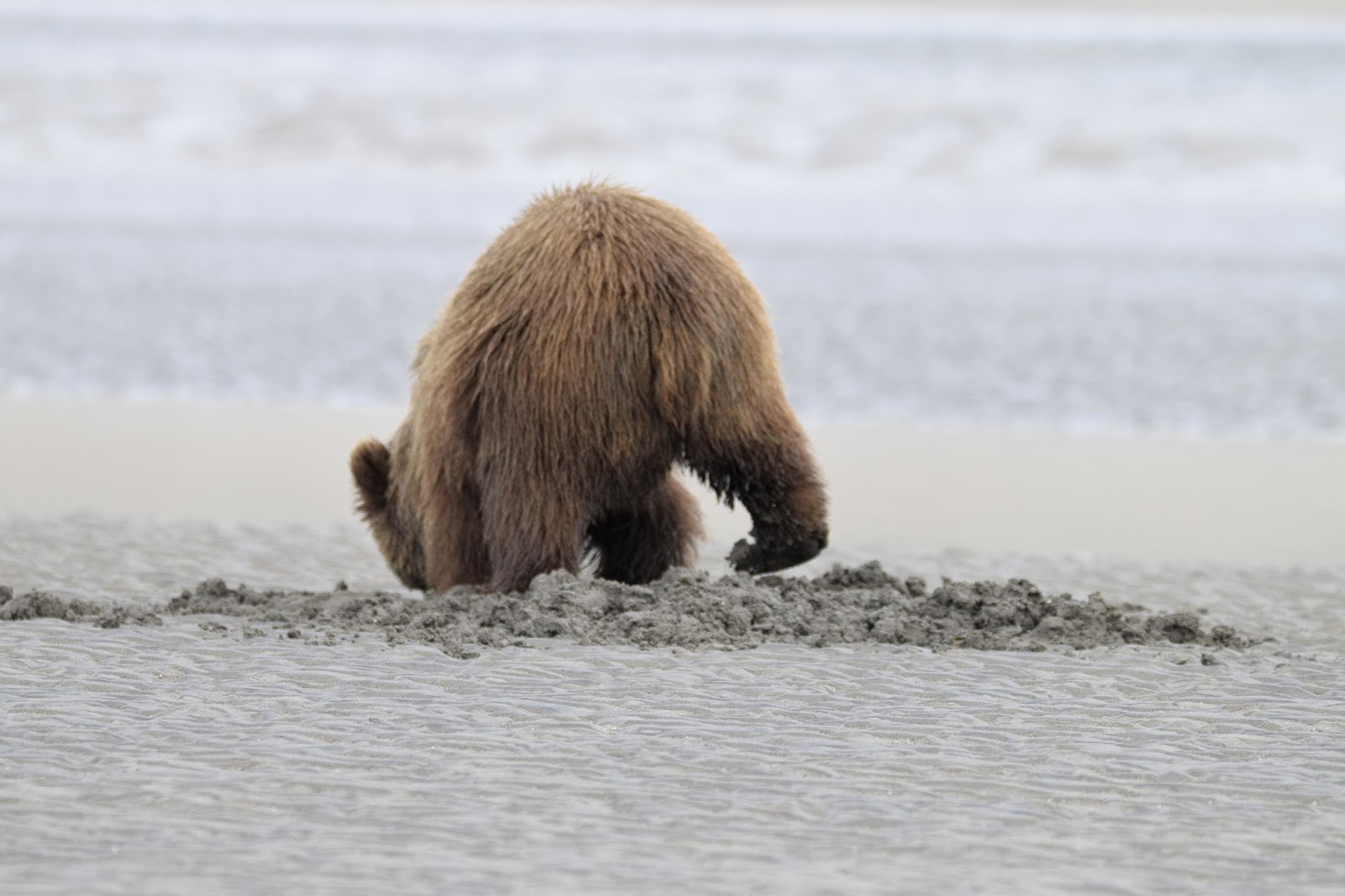 Dependent cub gets a little too annoying and is scolded by mum, who growls and grabs the cub by the scruff of the neck.    I miss this shot because I am fumbling with either my camera or my tripod, as usual.

Is it still there? 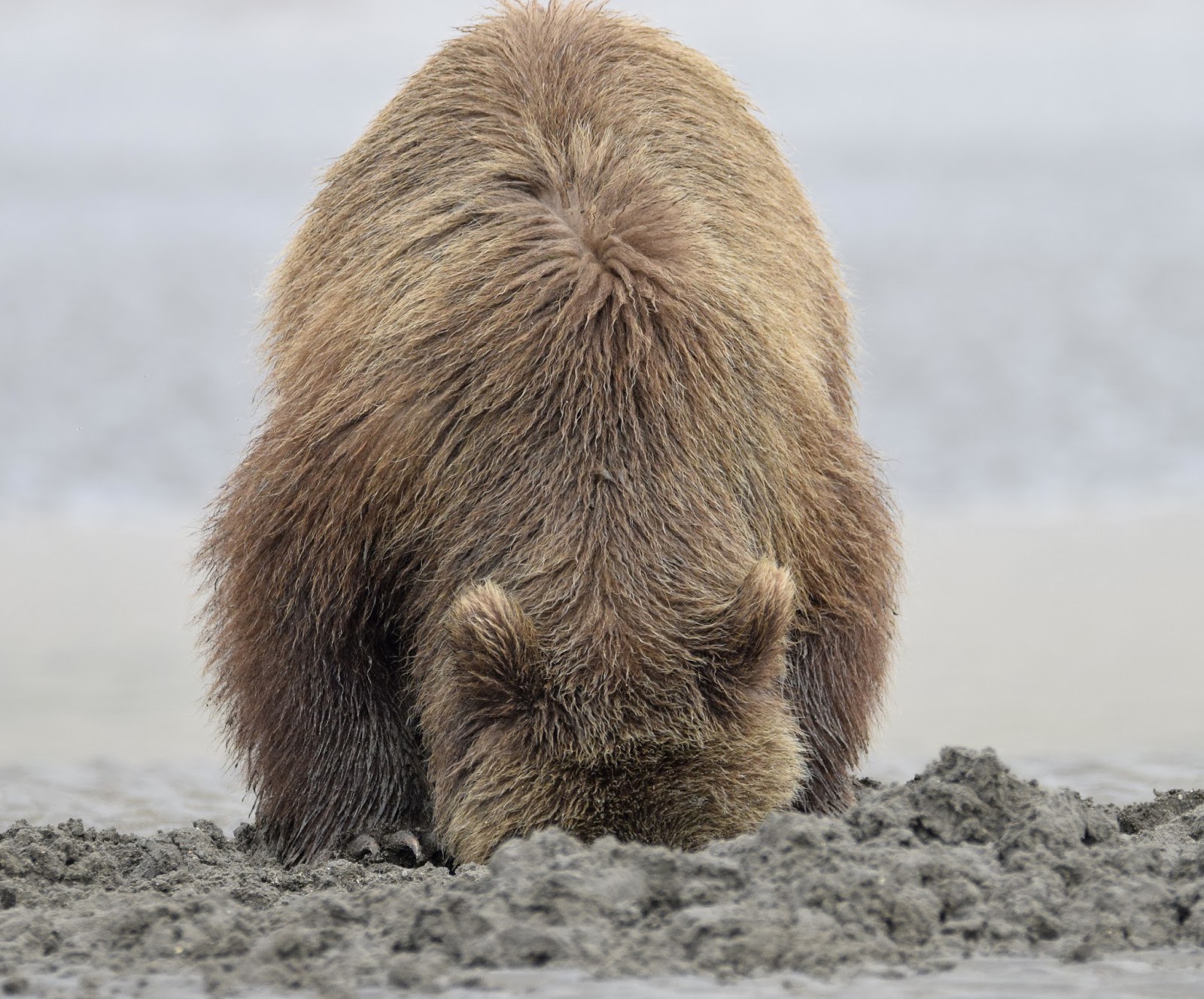 Very soon the bright silver salmon, called Coho, will enter the river on the way to spawn.   Then the bears will feed heavily on the fatty fish to build up the stores of fat they need for their long hibernation.