Notes from the Denali Highway: The Road Itself


I’m sitting in a remote roadhouse located in the foothills of the Alaska Range, enjoying French toast made with homemade bread and perfectly cooked bacon.  This is a treat for me, but the news I just heard has me concerned.

“We’re expecting three buses at lunch time,” says the server.   That absolutely floors me.   She names the well-known cruise ship/land tour company, and that makes it even more worrisome, but I keep my reaction to myself.

This is the Maclaren River lodge at Mile 40 on the Denali highway.   I’m here with my friend Leilani for two reasons:  to meet with four friends and enjoy some homemade jellies one of them is bringing, and to photograph a little flycatcher bird called a Say’s phoebe.

To call this road a “highway” is to elevate it to a status it has never enjoyed.  It’s 137 miles of gravel cutting through spectacular vistas by a narrow two-lane road.   Okay, 22 miles on one end and three miles on the other are paved.   It’s the kind of road where you can stop side by side and talk with people in another car, or just stop and aim your camera.

It’s seldom traveled and…   Well, some websites call it 'poorly maintained,'  but I’ve been over it several times and this year it’s in the best condition I’ve ever seen it.  After a heavy rain, the surface can become wash-boarded and will jar your teeth and toenails and several of your internal organs loose.

Most of the land is publicly owned by BLM and some of the adjoining state boroughs.   There are a couple campgrounds, but you can camp anywhere in the numerous wide spots, pullouts, or gravel trails. 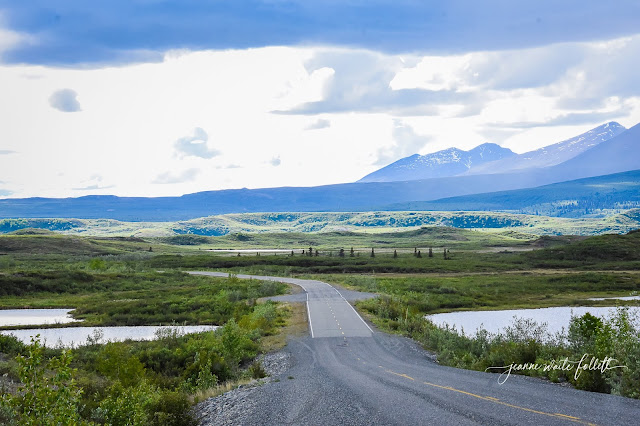 The road climbs quickly from Paxson on the eastern end into the Alaska Range foothills, wandering through tundra and willow scrub, zig-zagging around lakes and glacier-carved kettle ponds teeming with waterfowl.

Much of the road is built on eskers, which are long and winding ridges of gravel and other sediments deposited by moving and melting glaciers. 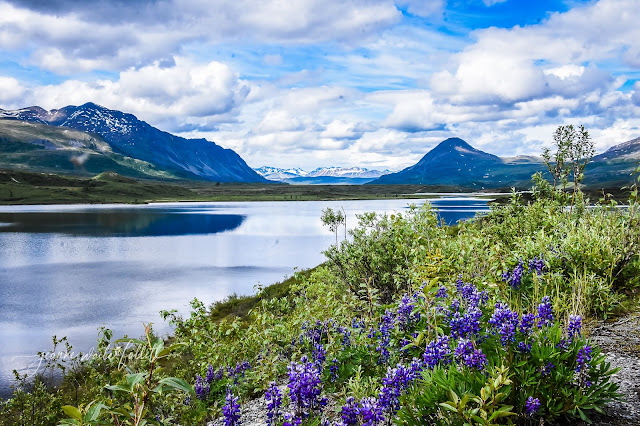 Though it’s called the Denali highway, these days it has nothing to do with the Denali National Park and Preserve.   Once upon a pre-1971 when the Parks Highway was opened, this road was the only road access to the park, then called Mt. McKinley National Park.   You could take a long railroad trip, or fly in, but you couldn’t get there in a car unless you took the Denali highway.   (Note for those days: Bring a number of spare tires.)

That the major tour companies are sending their behemoth 44-passenger coaches concerns me.  Yes, it’s an economic windfall for Maclaren lodge.   I grant you that and good for them.   However, I’ve seen what has become of some small Alaskan towns after the cruise companies began calling there.   They lost their identity, the things that made them special enough to visit.

I remember visiting the old gold rush town of Skagway a few years ago and was dismayed at what it has become.   “TANZANITE” shouted several store signs.  Well, there’s a genuine Alaskan souvenir for you.   Except tanzanite comes from Africa.  Mount Kilimanjaro, specifically.

Juneau, Ketchikan, Skagway, Seward—all influenced by the cruise companies.   Which stores are locally owned and which are cruise company-affiliated?   You’ll never know unless some brave local posts a sign in a store-front window.

Why is this particular company traveling the Denali?  I guess it's the shortest route between one of their mega-lodges and another.  That there are few non-company cash registers along the route is a boon.

To give the tour companies their due, their customers expect a certain level of value from the package they purchase, and what better way than for the company to own and control all the venues?   No, the company doesn't own Maclaren Lodge and I rue the day a tour company mega-lodge is constructed along this road.

What really worries me is whether the tour companies will lobby the state to have the entire route paved.   That means widening, perhaps re-routing, and installing the dreaded guardrails.   More traffic!  Maybe fewer pullouts.   Maybe less of what people like me go there for:  the silence, the solitude.

The road is heavily hunted during the appropriate seasons, so sightings of big game animals are infrequent.   But birds?   It is a paradise for birders and photographers.


So, while the wonderful French toast lay heavy in my stomach, the jellies were delicious and I saw the Say’s phoebe!