Notes from the Denali Highway: Getting There

Up at 4:30, out the door at 5, on the road heading north a couple minutes later.   Destination:    the Denali Highway, 138 miles on the Glenn highway, left turn, another 74 miles on the Richardson, another left turn.

But no rush.    Things to do before we get there.

First stop is at Ernesto’s in Glennallen, a wonderful restaurant specializing in Mexican food in what used to be the Caribou restaurant.   Leilani orders huevos rancheros con mole sauce; huevos con chorizo for me.   Sorry.   Hungry.   No photo of my huevos con chorizo breakfast, but this photo os of my going home lunch--three asada tacos 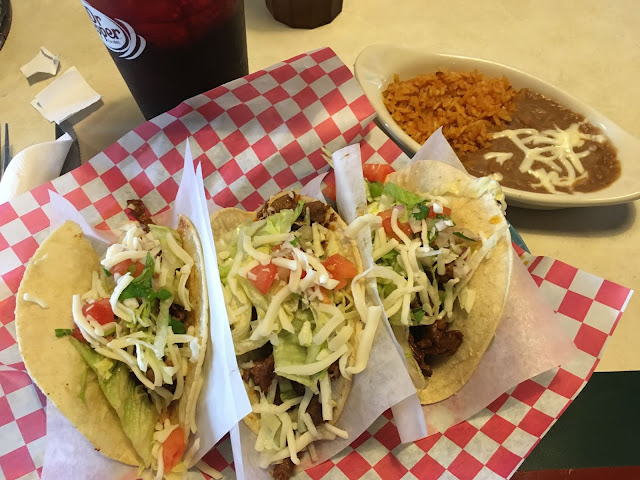 We make the heretofore mentioned left turn onto the Richardson highway and continue north.  Half way through, I admit that the painful lump in my throat is winning and I pull over to change places with Leilani.   I take two Aleve and settle in.

Thus far, we’ve seen a moose, two snowshoe hares, a squirrel, a raven, and a supporting cast of thousands of robins busy gathering food for their nestlings.

We reach Paxson, another left turn onto the Denali highway, and begin the real part of our adventure.   We stop at the first pullout.  And the second, and the third, and the fourth.   This is what it’s all about.

The first pullouts bring us a hermit thrush, an Arctic warbler,  and a Wilson’s warbler.  Perhaps a red-winged crossbill.


In another pullout, we’re chasing a small song bird when Leilani hears a willow ptarmigan nearby.    It comes to the outer layer of vegetation and disappears into a bush.    I walk around behind it, hoping it will show itself in the open.

I can see it behind a branch.   One step sideways, and I see it plainly. 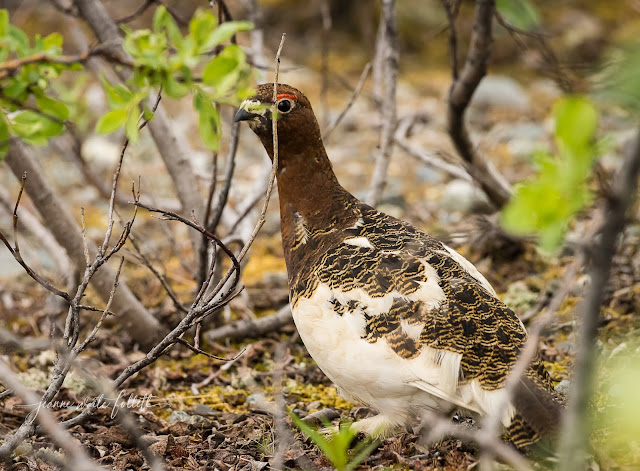 It looks at me.   At that point in its call, it makes a noise that sounds an awful lot like it’s saying, “Oh, f—k.”

Listen to the call of a willow ptarmigan here: 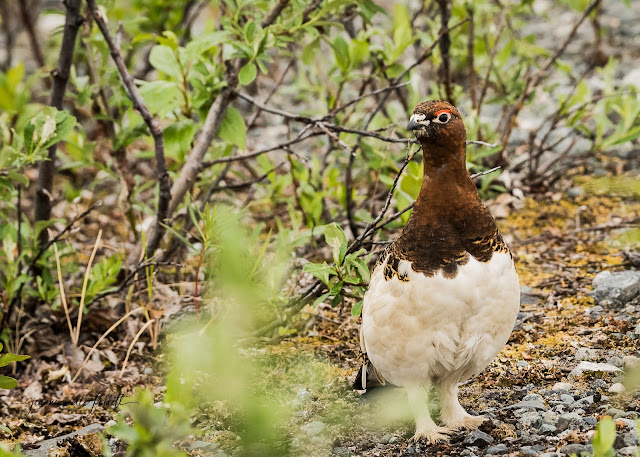 It saunters out into the open, we take our shots and head to the next pullout or pond or wherever we notice birds.

Somewhere along the way, I spot a caribou about a hundred yards out on the tundra.  She minds her own business while we photograph her with our long lenses in the rain. 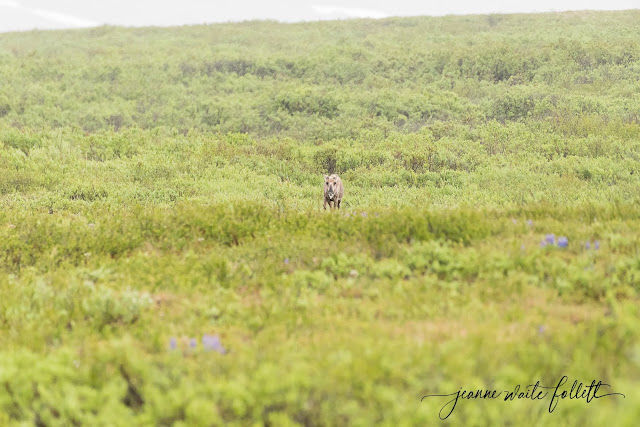 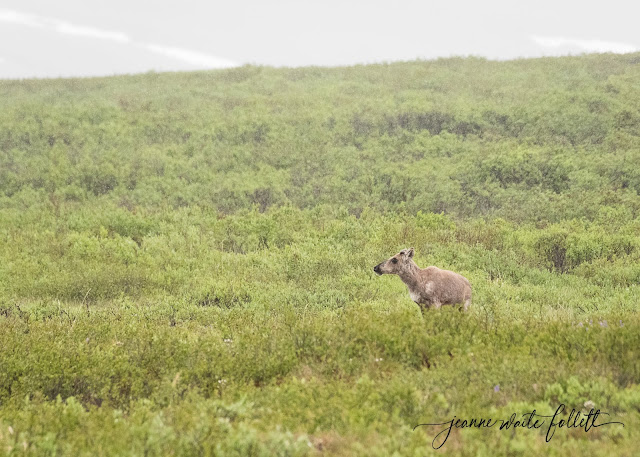 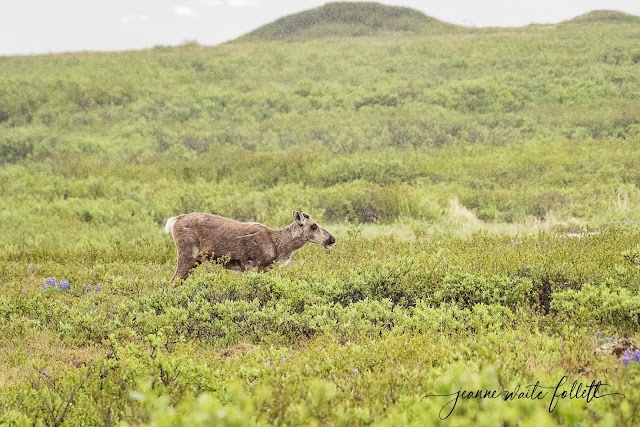 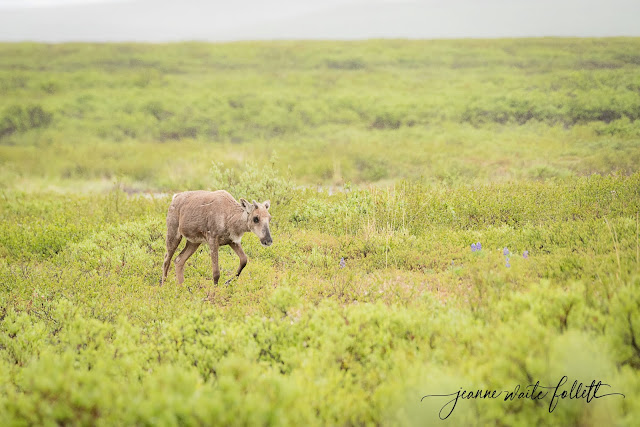 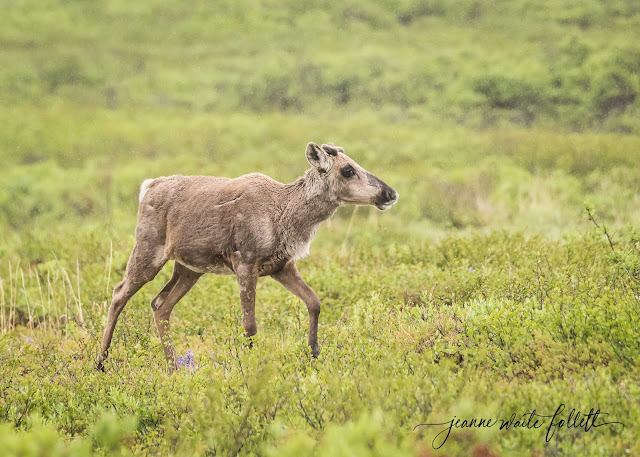 Soon, she is less than a hundred feet and moving into the last willow scrub between her and us on the road.  Suddenly, she rushes back out of the willows and vigorously shakes her head, as if she’s walked into a hornet’s nest.

Leilani says we should move on so she doesn’t come out onto the highway, and off we go at a snail’s pace.   The caribou comes out to the highway anyway, just in time for Doug and Rob to come upon her.

Rob, in between bouts of laughter, gets a series of wonderful shots of Miss Caribou kicking up her heels in the tundra.

Then there’s the next pullout and the adventure continues.