A Totally Ditchin' Weekend, Part One

Like lumenaria bearing witness to bad behavior, thirty yellow bags line a five mile stretch of the Seward Highway in Silvertip.  I spent several hours on each of the last four days filling those bags while traffic zipped past in both directions.

No votive candles in those bags, though.  Beer bottles, aluminum cans, soiled diapers, fast food wrappers—that’s what is in those bags.  Misdemeanors all, tossed by thoughtless humans.

I found a couple firsts in those five miles:  an aluminum Coca-Cola bottle and a clean baby diaper.  A clean one.  That’s a welcome change.  A cane, a long chain with a huge hook on one end, pieces left behind after the wrecker towed away wrecked cars.

On the other hand, the time spent there was enjoyed.  It’s my favorite part of the fifty miles of highway I help clean up.  Wide, sloping shoulders with grass and brush mowed so walking is easy.  East Fork Creek nearby.  A bike path nine miles long wandering alongside the highway.

At Mile 61, the shoulders are like a manicured lawn, except for one spot where there’s a patch of sand perhaps four feet across and just as long.  On that exact spot, I found the tracks of where a brown bear crossed the highway.  A step to either side, and there would be no footprints visible in the grass. 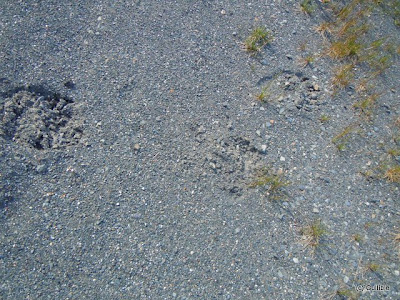 In another place, I found ANOTHER mini-toothbrush.  This makes at least five I've found this year alone.  What?  Is there a Dental Hygienist Barbie out there? 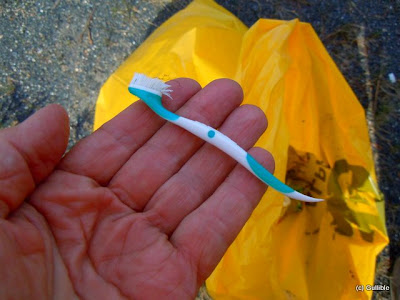 This was a tough winter on trees.   Heavy snow caused many to break and fall into the highway right of way where the maintenance crews bucked them up into wood stove length and left them.  I pick them up.  Hey, firewood's firewood. 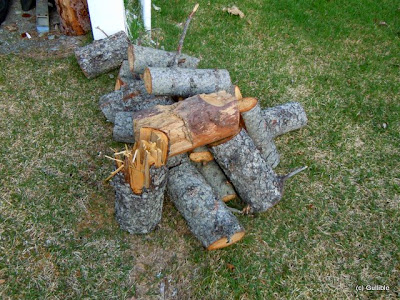 Balls.  I find balls of every kind.  A dead soccer ball, tennis balls, footballs both real and Nerf.  And golf balls.  I have found at least six golf balls this summer.  Those dumbfound me.  Why golf balls in the middle of nowhere?  And then, toy balls.

I found a plastic jar and threw it in the litter bag.   Just as it dropped into the yellow light, I glimpsed a design on the jar. 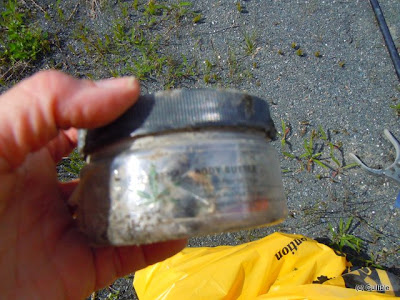 I fished it out of the bag and opened it. 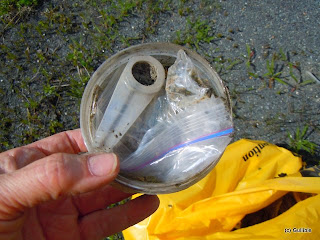 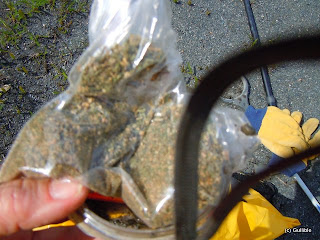 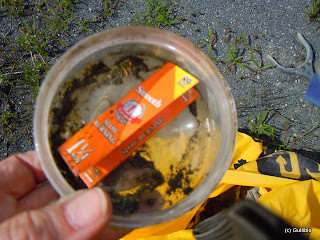 Someone's stash.  I wondered how someone could loose this.  Maybe tossed it out of the car before pulling over for the red/blue lights and siren?

As chance would have it, a State Trooper happened to be at an adjacent pullout, and I asked him what to do with it.  I thought he'd confiscate it, take it off my hands.

"Throw it in the ditch," he replied.  "That's what we do when we find them during a stop.  It's organic."  So that's why I find so many pipes along the road!!!

I removed the baggie of pot from the jar and put the jar, pipe, and papers in the litter bag.  I carried the baggie with me until I came to a place with water, and sprinkled the pot around.  Who knows?  Maybe it'll grow. 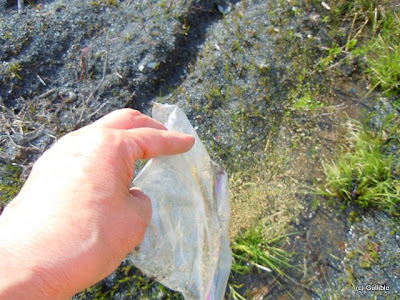 Litter-picking is not without its fun.

Wait until Part Two and I'll show you how much fun it can be.
Posted by Gullible at 10:58 PM