Okay, so maybe some of this is fiction, but then again, maybe not. Perhaps my real name is Yanska Slabos, and I’m married to a guy named Zoltan Stepeshi. Perhaps Yanska is a middle-aged famous but ex-tightrope walker on disability because of her sciatica. Perhaps Zoltan now has to support the family. The circus can no longer afford to carry them, since Zoltan’s dancing emu act has never been all that popular.

My question for you is, how is Zoltan going to make enough money for their annual holiday trip to their cabin in Upper Sanduski, especially now that the circus has left them stranded near the Okefenokee Swamp?

And here's the response from the mind of Gullible: 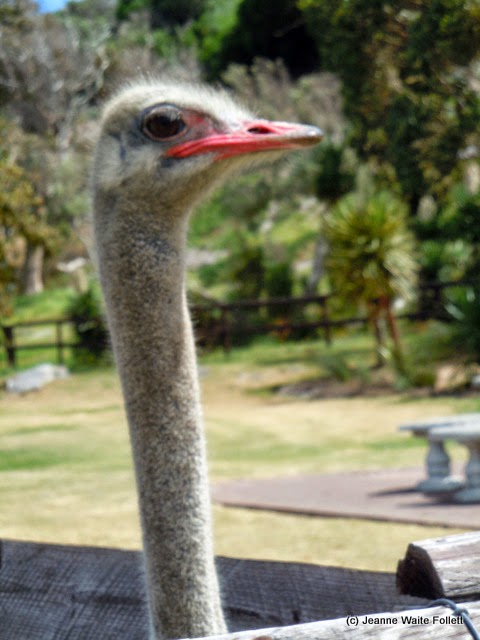 The day I met Zoltan Stepeshi is seared into my memory like…. like…. Well, I was going to say like the grill marks on shrimp cooked on the barbie, but you’d probably just groan and shake your head. That simile—or is it a metaphor, never could keep the darn things straight—is pretty apropos as you’ll soon find out.

Anyway, that day I was making my oval around Uluru. It was late afternoon and there weren’t many tourists because all the tour buses were parked on that overlook on the other side of the rock, where the tourists are served orange juice and champagne and cheese and crackers while they watch the rock change color during the sunset.

I come around a big pile of boulders and I see this guy with a butterfly net and he’s dipping it into the little watering hole—you know the one I mean—in and out, in and out. Well, this looked interesting so I decide to watch him for a while. Eventually he looks up and says, “Oh, hello. You must be an emu.”

I take a deep breath and let it out slowly before I move a little closer. “No, actually I’m an ostrich,” I say.

“But this is Australia. You MUST be an emu.”

“Nope. Ostrich.” And I stick my foot out so he can see, only all I get is this blank look. Okay. I do my patter. “Ostrich—two toes, emu—three toes.” He gets it, so I ask him what he’s doing with the butterfly net.

“I’m trying to catch some shrimp to cook on the barbie,” he says.

Oh, boy, another one. Ever since that Crocodile Dundee movie, everybody thinks Australia is awash in shrimp. I explain to him that there aren’t any shrimp here in the Outback and certainly not in a tiny watering hole ten feet across on the back side of Uluru. He asks me, “What’s oo-oo-oo?”

“Uluru. Eww-lah-ROO. Name of this rock. You folks know it as Ayer’s Rock. The Aboriginals call it Uluru.” He gets it.

“I work here. I’m the local color. I wander around and the tourists think I’m an emu and they take lots of pictures.”

“What’s a job like that pay? If you don’t mind me asking,” he says.

“Yeah, like your wages. You know, money, moolah, dinero. How much they pay you to be the local color?”

“Nothing,” I say, “I get to stay here. Plenty to eat, lots of funny tourists, nice weather.” He says his wife is climbing the rock today and I say I hope she has a good sense of balance, like, people die up there. He laughs and asks, “You ever heard of the Flying Wallendas?” Of course, I have, I say. My uncle got around a lot and told me about them.

So Zoltan tells me his wife is the great-great-grandchild of Karl Wallenda, and that explains a lot. He says she’s terrific on the high wire in the circus they’re with, but lately she’s been having some back trouble.

He invites me to join him and his wife in the campground, so we wander over that way and there’s this beautiful lady sitting in a camp chair outside a dome tent. I mean, hubba hubba. She’s an eyeful and I have big eyes, let me tell you.

“Ostrich, this is my wife Yanska. Yanska, Ostrich.” She looks at me and she has this gleam in her eyes that I’ve seen before. I mean, I’m a darn good looking specimen, but that gleam means something else. I know that look. She thinks I’m an emu.

“Well, hello there, Emu,” she says. “Sorry, I’d get up if I could but my sciatica is killing me today.”
Uh, huh. I KNEW that look. So I say nice to meet you and all that, and then I add that I really am an ostrich and not an emu.

She says ostriches are in Africa, not Australia, and I say my great-great-great-granddaddy was one of the first ostriches on an ostrich farm here and when he found out why they were brought here from Africa, well, a bunch of them lit out for the Outback and now we’re feral. I see that light in her eyes dim by a few lumens, but not many. I tell her I know what she’s thinking, but it isn’t true about emu oil being an anti-inflammatory agent. Just an old wives tale. Won’t help her sciatica a bit and she should stick to Advil. A few less lumens, but she’s still skeptical, so I hold out a foot and do the old two-toe/three-toe thing.

Then I add, “You do know that to get emu oil, you have to render the emu, don’t you? It’s a one way street for the emu. The oil isn’t something they excrete.” The light of hope dies, and I feel kind of sorry for her. She says it didn’t bother her until the stupid clowns had her join them in the clown car to start her act one night and with her making 25 in that little car, well, her back hasn’t been right since.

Long story short, Zoltan and Yanska talk me into going with them to the United States. I insist he buy me a business class ticket, ‘cuz there was no way my legs would fit in a coach seat.

We make up an act where I’m a tap-dancing emu, and I can really pound the boards with the one nail on each foot. Worked out pretty nice, as long as no one noticed I have only two toes on each foot.

Summers we spent touring with the circus and winters we spent in Gibsonton, Florida, where all the circus and carny folk hang out. This was no Flea Bag show. We were a real Sunday School Show, on the up and up, no shills, no dirty girl shows, nothing illicit. Even the carny games were legit, which is another one of the reasons disaster happened.

The Big Top fell, figuratively speaking. Yanska’s sciatica got so bad she had trouble walking and there was no way she could get on the rope again. Attendance fell off horribly and the take was pitiful. The lady who did the Iron Jaw—hanging by her teeth—got an abscessed wisdom tooth and couldn’t work.

The pitchman was laid off first, then two of the three Ringmasters. They sold off all but one of the elephants, the trapeze lady got pregnant and went on maternity leave. A lot of the carnies cried when they said their goodbyes, but they had to make a living, too.

As for Zoltan and me, well, they couldn’t carry a dancing emu show anymore. The whole thing fell apart on a back road near the Okefenokee Swamp when a gator panicked the horses and they bolted for who-knows-where. Zoltan called a Boss Hostler he knew and by the next afternoon we were safe and sound in Gib-town.

Zoltan and Yanska were heartbroken. They didn’t even have enough money to make their annual holiday trip to Upper Sanduski. They brooded and moped about for a few days until I finally coudn’t take any more of it.

“I see my dearest friend,” he said immediately. I swallowed and blinked my eyes to clear the mistiness.

“I see a fine ostrich with a long neck, gorgeous feathers, and two long legs.” Yanska nodded in agreement.

“Zoltan. Yanska. Has it never occurred to you that I have the gift of speech?”

Yanska got it first. The light kindled in her eyes and it wasn’t for rendering emu oil out of this ostrich body. Then Zoltan grinned. He got it, too.

The next winter we rolled into Gib-town in a brand new 44 foot long diesel pusher motorhome with three slide-outs and an extra-high roof so I didn't have to crouch.   All our friends showed up and the Boss Hostler said, “Well, lookie here. Ain’t you sitting pretty? Win a jackpot in Vegas?”

“No,” Zoltan said. “We earned this money the hard way. We worked for it.”

Well, they all hooted and cackled and said sure we did, and all that. Then they got serious and asked us how we really made it.

So, Yanska stepped up and reminded everyone how much Zoltan likes gambling and jokes and everyone nodded and said yeah and all.

And the rest is history.