The Africa Journals, Ch. 66, I Resemble that Passport Photo


I Resemble that passport photo

Airplane travel is nature’s way of making you look like your passport photo.—Al Gore

Bags packed and carried away by the bell hops, passport and plane tickets located, carry bag in hand, I walked out the front entrance of the Cullinen Southern Sun Hotel and into the blast furnace of Cape Town.   What happened?   All three weeks in southern Africa had been pleasantly warm until today, and now the breeze served as a blowtorch, plastering us the flames of Hades.

Someone said it was 105 degrees.  I thought they were lying; I thought it was much hotter than that.   Maybe they meant 105 degrees centigrade.   That would be closer.

Brian was standing on the sidewalk next to the coach that would take us to the airport.  He would not be going to Johannesburg to make sure his flock got to the right gate the overnight flight to the USA.   It made sense because he lived in Cape Town.

He lamented the goodbyes like this:   “Just when I have you trained, you’re leaving and they’re sending me a new group to train.”   Ah, the perils of a travel guide.

I gave him a hug and thanked him for sharing his country with us.  “Did you enjoy it?” he asked in his charming accent.   When I assured him I’d loved every minute of the trip, he said, “Sometimes single travelers feel left out.  I felt like that after my divorce.

“No,” I replied.   “I’m comfortable with my own company.”   I then told him of my husband succumbing to Alzheimer’s Disease a few years prior, and how much my life has changed since then.  “I don’t have time for negativity in my life,” I said.  We hugged again and I got on the air conditioned coach.

Brian came down the passageway handing out bottles of cold water and saying goodbye again to all.   I knew he was concerned about us finding the right departure gate in the large Johannesburg terminal—even though we’d been through there before—when he said, “Turn left and remember the big hole in the floor!”   The “big hole in the floor” was similar to a multi-level atrium where we could see to the floor below. 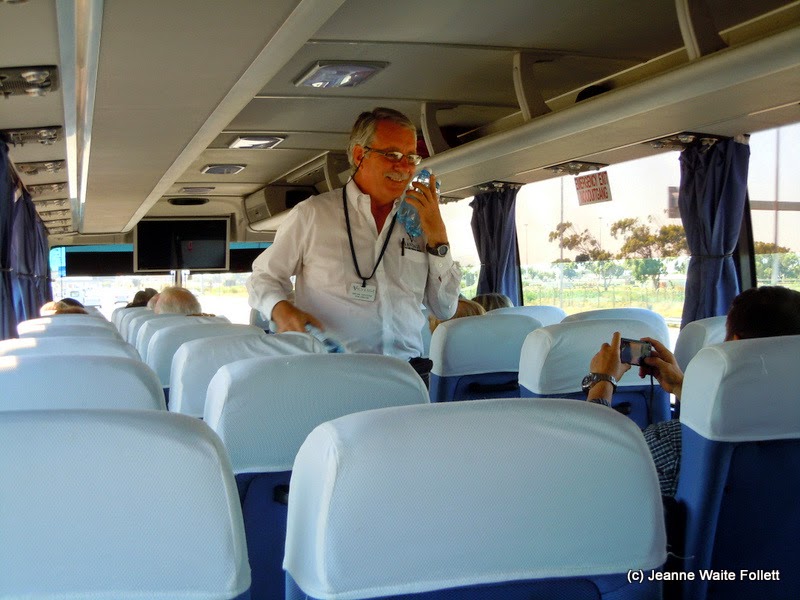 And then we were off, first to the Cape Town airport, landing in Johannesburg, then boarding South Africa Air for a long flight to Washington, D.C., with a stop in Senegal.  I looked at my boarding pass suspiciously.   The assigned seat number didn’t look like the seat I had selected.

And I was right.   Rather than a window seat in large exit door area, the kind where your tray folds into the arm rest, I was in the row behind it on the aisle.

And with that, the most agonizing eight hours and forty minutes of air travel EVER began!

My seat mate was a tall, thin African man dressed in a business suit.   Right away I saw he had a pillow between his knee and the seat back in front of him.  I looked at my own knees.   As short as I am, my knees also touched the seat pouch in front of me.

Across the aisle, the entire middle row of four seats was empty.  I put my jacket, blanket, and pillow on the nearest one, crossed my fingers and hoped they remained empty.

It was not to be.   Just before the door closed, three African women boarded and noisily stole those seats right out from under my covetous stare.  They were in long African-style dresses, dripping with jewelry, and sporting intricate hair dos.  The third woman was much older, perhaps a mother or grandmother, and she was wearing something akin to a burka, though her face was exposed.  The two women ignored her.  Hmm, I thought.   A chaperone?

My seat mate and I started talking.  He was originally from Zimbabwe and now living in South Africa, and was going to America to attend a conference.  He asked where I’d visited and we talked about that, along with the different foods I’d sampled, history I’d learned, and so on.  I asked him if he would like my pillow for his other knee, but he kindly refused, saying that knee was okay.  He said the women opposite were from Senegal, and in response to my question, said he could tell by their dress.

This flight had boarded in the evening and was a 19-plus-hour flight to Dulles International in Washington, D.C., so there came a time when I tried to go to sleep, “tried” being the operative word here.  As the hours wore on at the pace of evolution, another part of my body would join the parts already in agony.  I tried thinking about our group's last dinner together in Cape Town.   I tried slow breathing in and out.

The two Senegalese women across the aisle wouldn’t shut up, making my quest for sleep an impossibility.  The third never uttered a sound.  I looked forward to arriving in Dakar, just for the relief of a break in this ungodly flight and the hope that a different seat would open for my suffering seat mate.


I stared at the seats along the aisle, mentally measuring the leg room, until I was convinced my row was at least three inches shorter.  Sleep was impossible.

Finally, finally, the plane began its descent into Dakar.   My seat mate said we would have to deplane and go through a security inspection in Dakar.   “But we’ve already been through security in Johannesburg.   We didn’t deplane coming over.   Why now?”

“It is the extra security demanded by your country for anyone entering it.   Your country has many enemies…”