Mongolia, A Report from the Field, Cap's Cold Feet


“My feet are cold,” says Cap.  So are mine—NOW—and I am torn between laughing  or smiting him smartly about the head and shoulders.   I do neither.   Instead, I make a note and plot a more fiendish revenge—a nice post on my blog about how he gave us all cold feet.   So, here it is.   Payback. 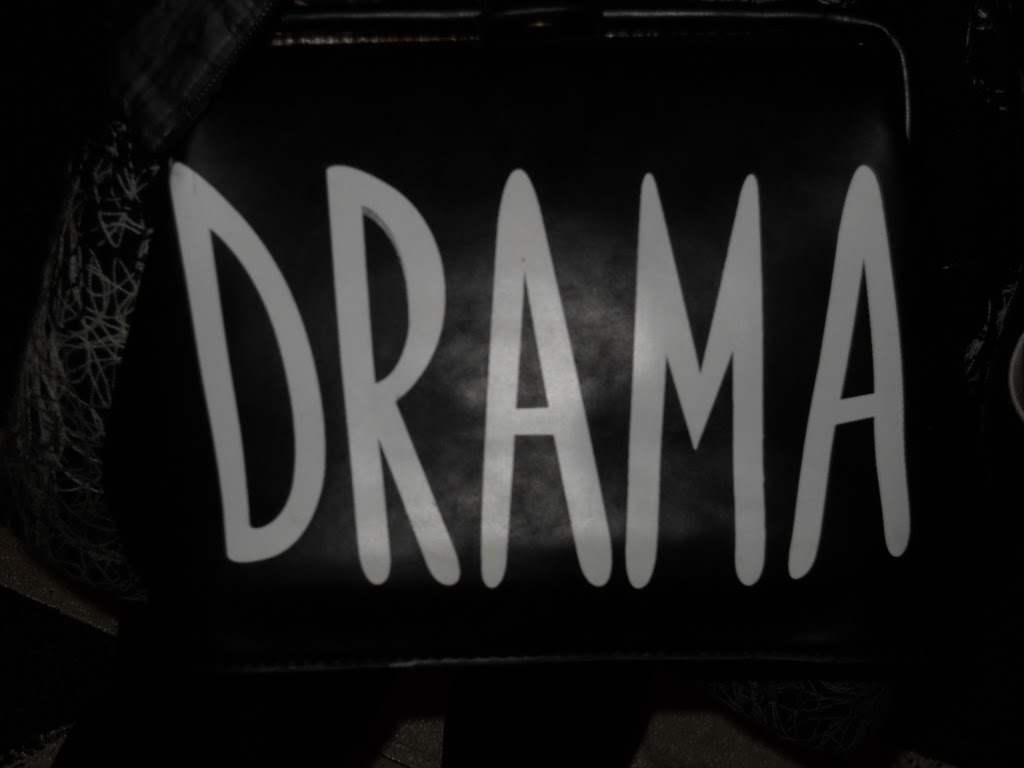 As they say in detective novels, it all began this morning when we met in a banquet room in the 50/100 Hotel in Moron, Mongolia.   We arrived at 8 A.M., the same time the cooks did.   Within a few minutes, we were served a bowl of mushroom soup.

Then came a nice Denver omelet along with bread, butter, jam, and tomatoes.   Tasty breakfast, and just right for a cold day after an overnight snow.

Cap appeared without Patti, so he ate two breakfasts....   Except for the soup.  Not Cap’s favorite.   He doesn’t eat mushrooms and when he can pick them out of his food, he gives them to Patti, who relishes them.

We loaded up in the SUV and headed south from Moron with packed snow and slippery ice covering the two-lane road.   I’m in the left front seat, Chimdee the driver in the right seat, Cap and Patti are in the two middle seats.   Yusuf sits in the rear seat with the overflow luggage. 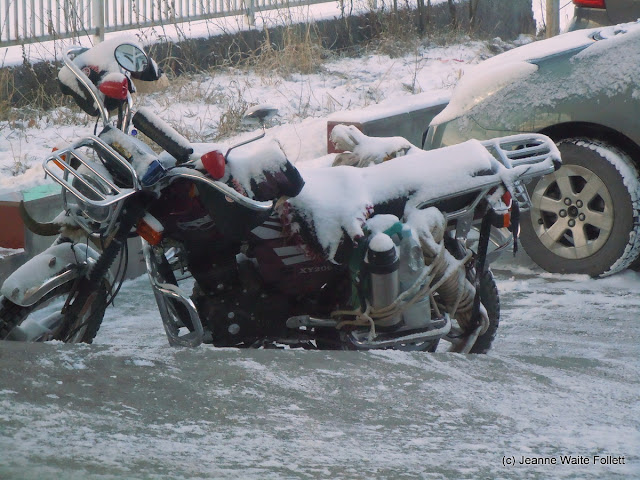 Usually the guide rides in front next to the driver, from where he comments on things we are passing.  Since Cap and I are all about photos, we seniors “bullied” Yusuf to the rear and he didn’t complain.  (Out loud to us, anyway.)

Now, back to Cap’s cold feet. 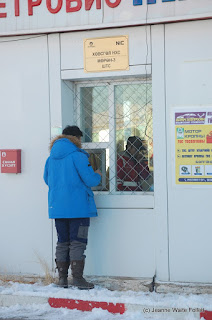 Chimdee pulls into a gas station before we leave Moron proper and stops.  Cap, as usual, gets out to let Yusuf out to pay for the gas and to walk around, leaving the door open while the rest of us sit in the still-chilly van.  This all takes several minutes—the refueling and paying—and by the time Cap gets back in the van and complains about his cold feet from standing in the snow, the van has returned to its earlier frozen state and we all have cold feet.

Eventually the van warms up, but my feet stay cold.    We drive on, trying to get as close to Ulaanbaatar as possible so we can be there easily by noon tomorrow. 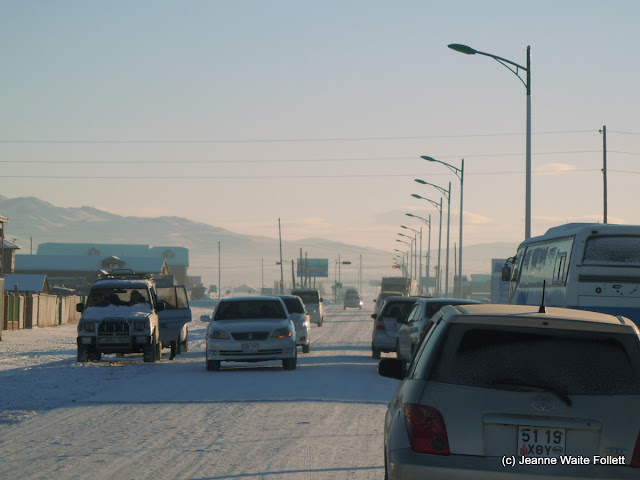 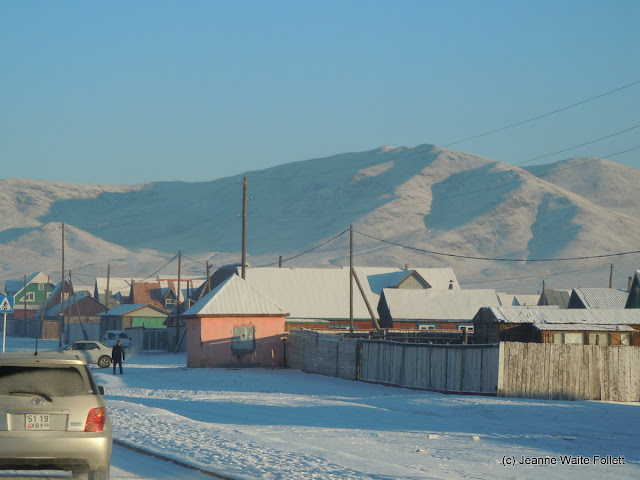 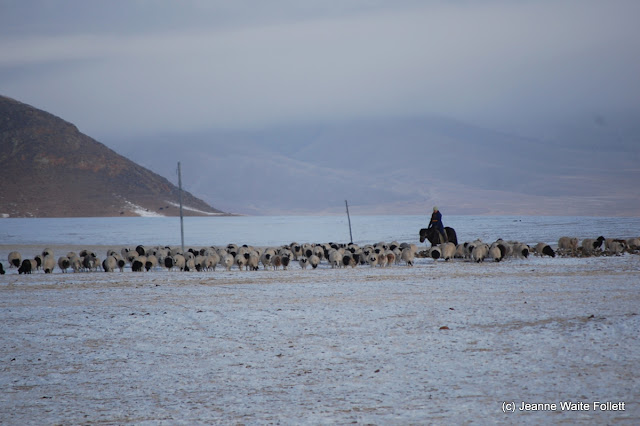 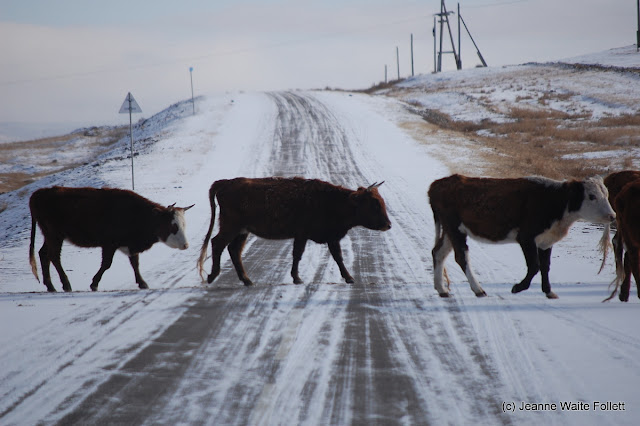 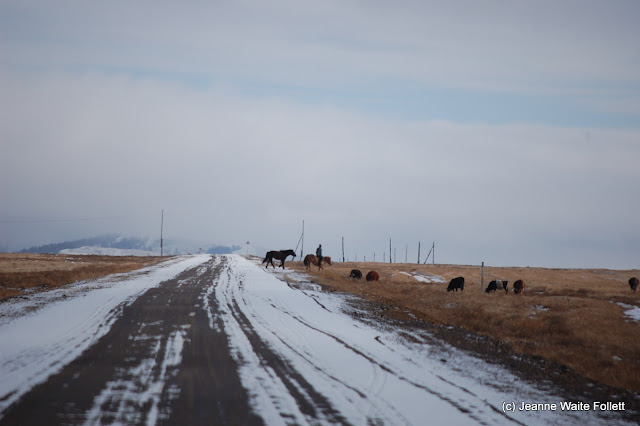 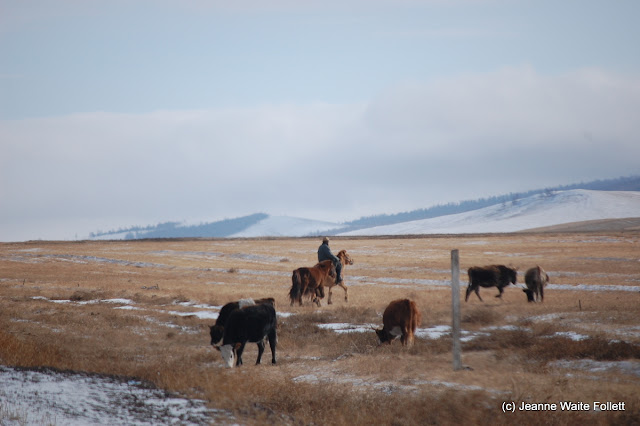 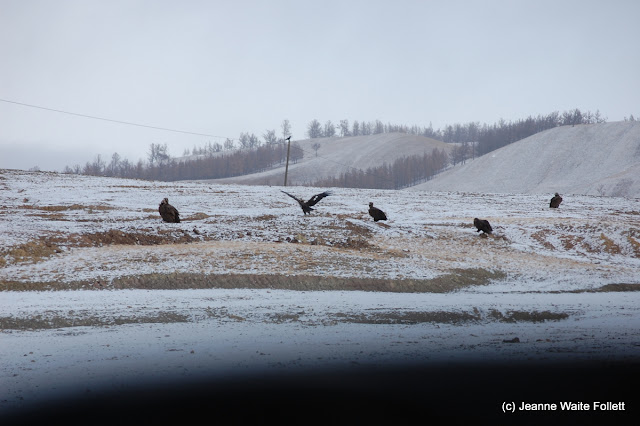 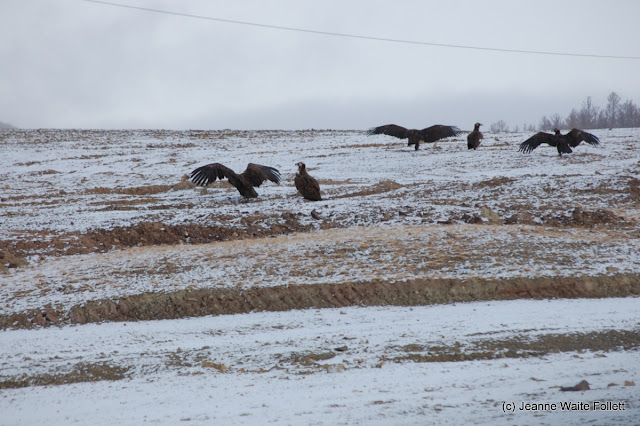 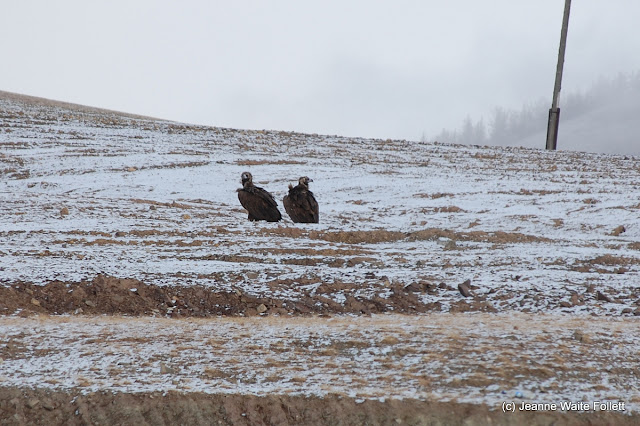 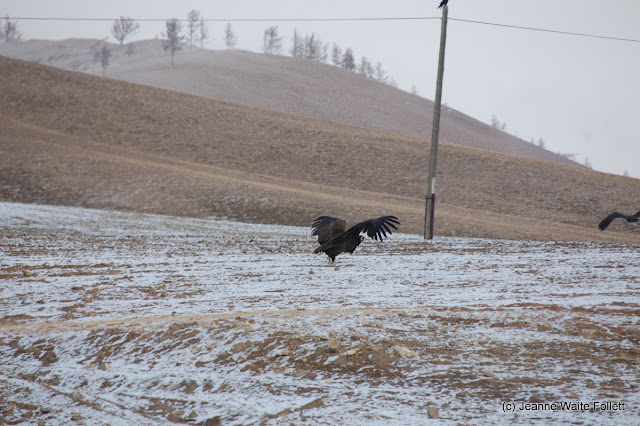 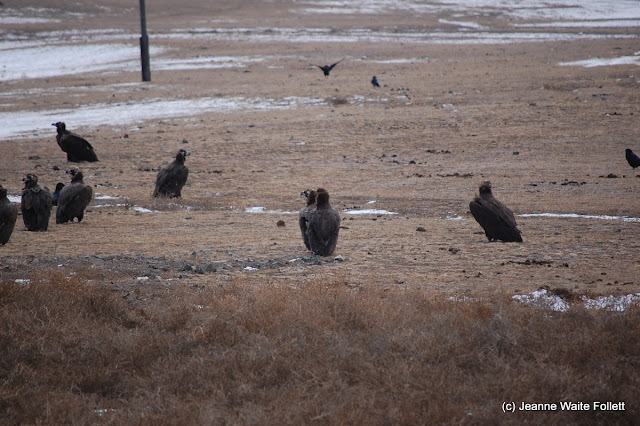 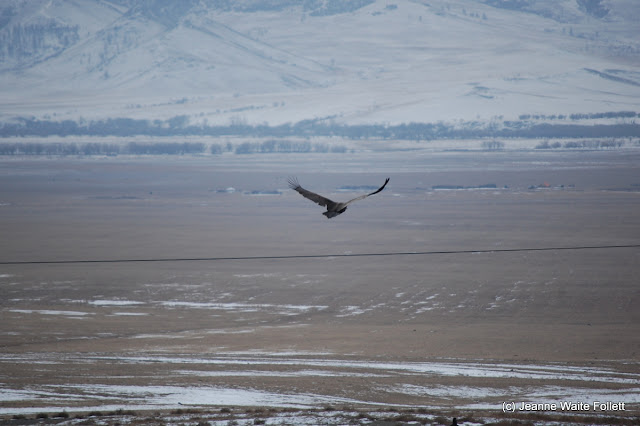 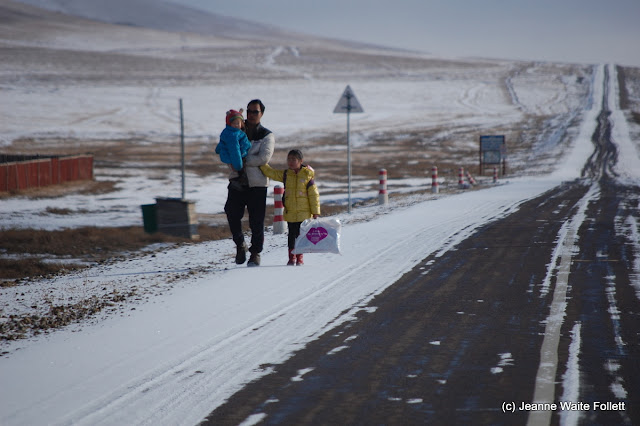 On the outskirts of Bulgan, where we had stayed in a remodeled Khruschev building a few days before, we pass a sign that reads:   No Alcohols Bulgan.

I ask Yusuf and he says it's like a motto, a form of encouragement not to drink.   Alcoholism is a major problem in Mongolia.   We drive on.

“Jeanne, are you hungry?” ask Yusuf after a while.

“How about you guys?” he says to Cap and Patti.

“NO!” says Cap emphatically.   “Erendet!”   There is someone there in Erendet he hopes to contact and is anxious to get to this large city.   So on we go, stopping only when Cap requests a break to water the snowy gravel shoulders and go walkabout for a few minutes.   Patti laughs that it’s a good way for him to burn off energy and keep him calm during the drive.


Eventually, we reach Erendet and stop at a very nice Asian restaurant for lunch.   Cap goes walkabout again—to the post office and a place where he can add minutes to his cell phone.

Now, all the walkabouts today must have given Cap a big appetite, because when returns from doing his chores, he devours the last bite of Patti’s fruit salad, more than half of my chicken Alfredo with broccoli, and a huge portion of Chimdee’s luscious yak short ribs with roast potatoes, carrots, and spinach.


In fairness to Cap, Chimdee offered all of us a taste of the yak meat.  Yusuf and Patti declined, as neither of them are red meat eaters.   I accepted a small bite although I had already eaten too much of my pasta; it was delicious.   I’m not sure what happened to Yusuf’s shrimp with pasta.   Maybe he ate it all before Cap got back to the restaurant. 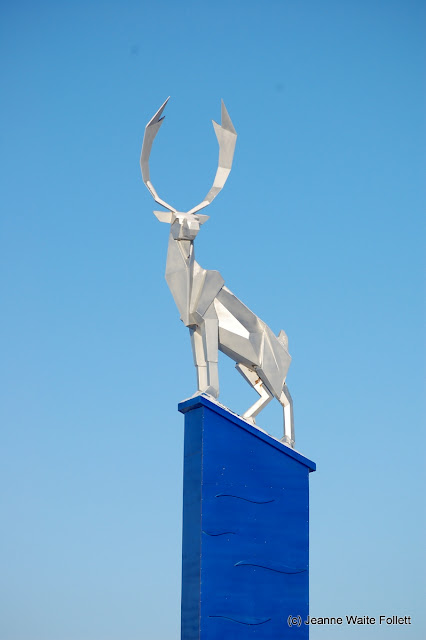 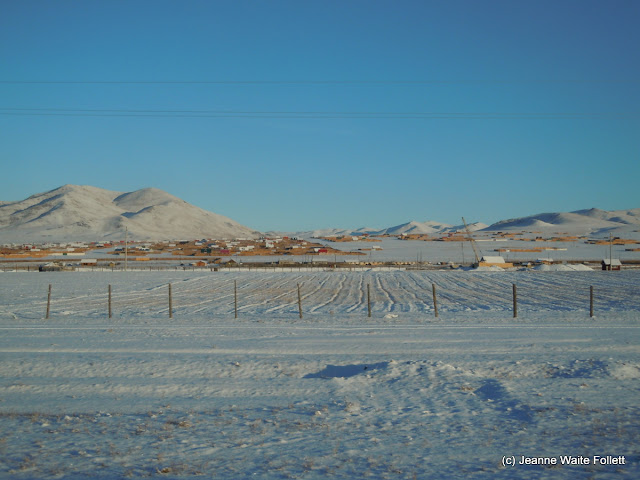 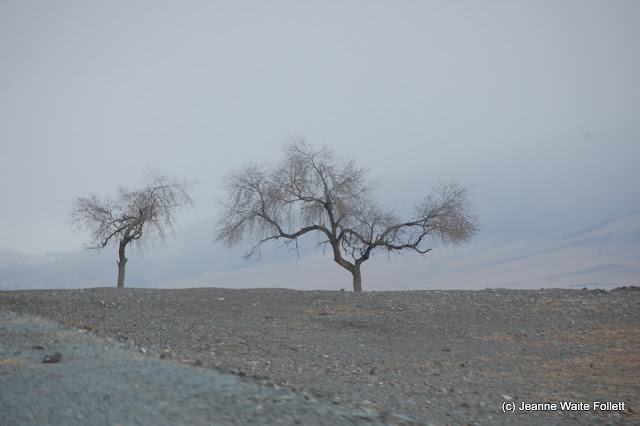 Cap finally accepts my offer to let him have the front seat for the next leg of the journey.  Before we reach our hotel for the night, Chimdee once again stopped to refuel the van.  A handsome young boy smiles at us from the station lot. 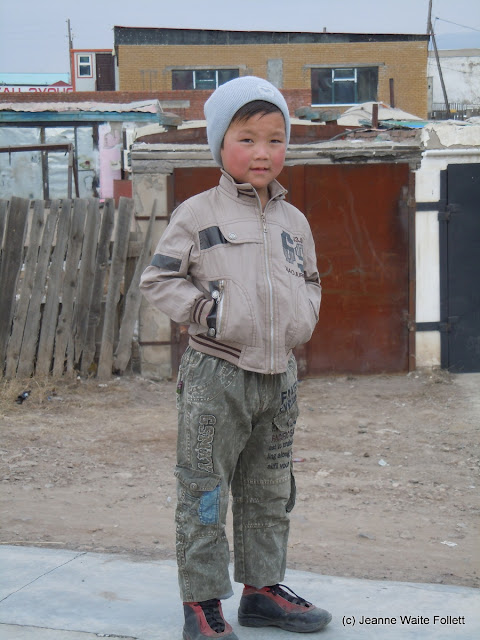 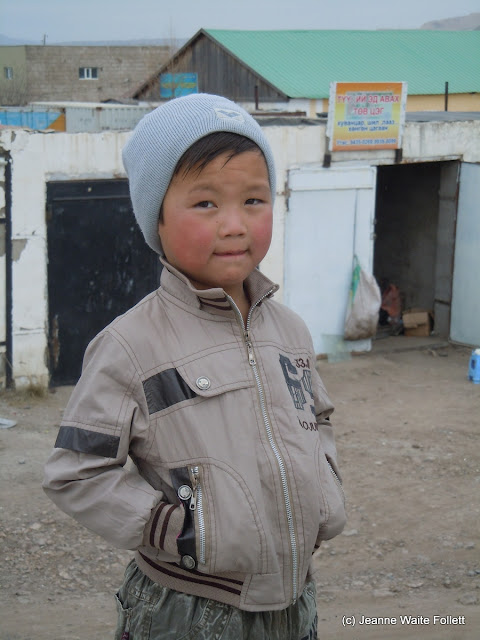 Cap and the boy exchange hand signs and Cap gives the boy some money.   I walk over and give him a wafer cookie.   He is a sweetie.

And then we arrive in Darkan, but not before more of the DRAMA that seems to follow Cap like a faithful puppy.