Last week, after my flight landed in Anchorage and groceries were loaded in the truck, I started the hundred-mile drive towards home.   A mile before I reached my driveway, I made a detour to the right along Tern Lake.

The resident swans and their cygnet were still there, but I could not find any of the three American dippers that populated Dave's Creek, the outfall of the lake.   The next day, I returned, and could find only salmon a partially-eaten silver salmon carcass along the creek bank.  Eagles have been fishing, I guessed.


Then, a storm brought an inch of snow, during which I stayed home, catching up on stuff after my three-week trip.  The day after, I once again went to Dave's Creek in search of dippers, thinking about what a long winter it would be if the dippers had left for other places.

So, that's what I was concentrating on as I walked down the few steps to creek level and searching the favorite perches of the little birds.  I noticed some fresh  footprints on the path and hoped the mergansers hadn't been scared away from the bend in the creek where they sometimes hang out.

In some nook and cranny of my brain, I was wondering what kind of shoes or boots made those peculiar round tracks, but my  main concentration was on finding dippers.    They are gray and tend to blend in with their surroundings.  Unless one moves, I could easily overlook it.


Then I saw a savaged salmon carcass beside the path and a large pool of blood nearby that had soaked into the snow.   I couldn't see any eagle prints around the fish, just those odd round tracks. 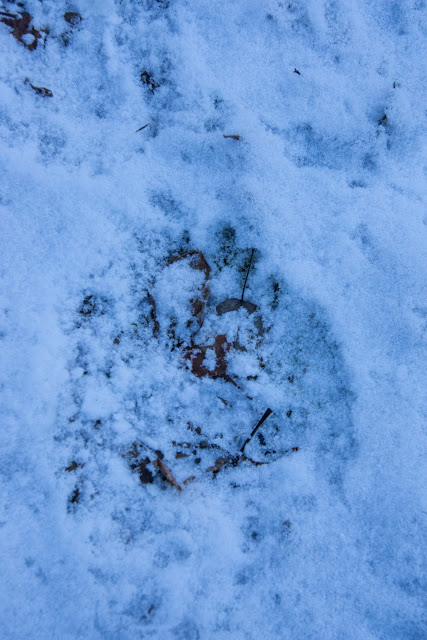 I decided to take a closer look at those prints and suddenly realized I was looking at them upside down. 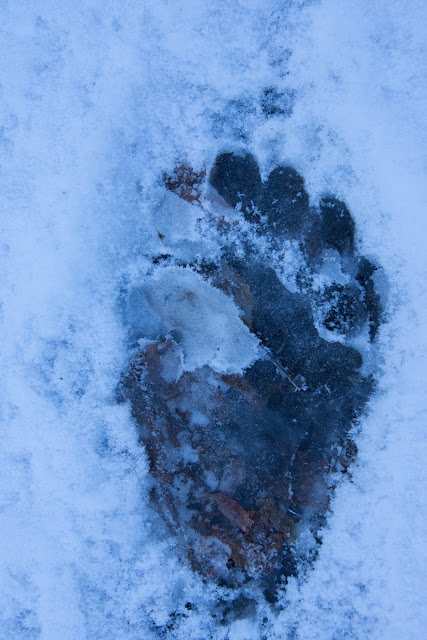 Just as I suspected.   This is the print left by the right hind foot of a good-sized brown bear. 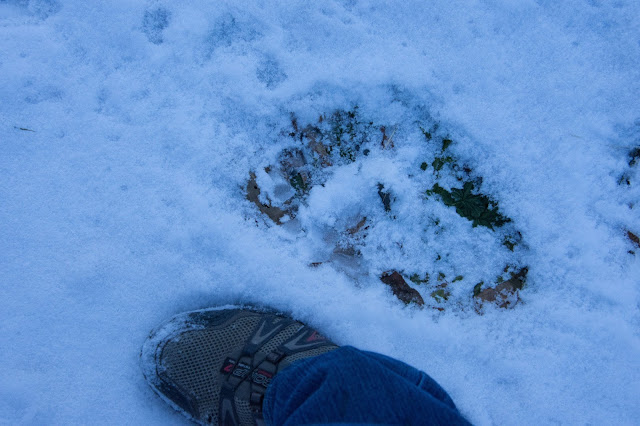 Although the leaves have fallen and I could see a long way into the surrounding forest, I decided this might be a good time to go home.   And I did.

Another snow storm brought a couple more inches of snow and I went back to Dave's Creek, this time armed with camera and bear spray.


Five mergansers were paddling around the headwaters of Dave's Creek where dozens of spawning coho salmon were milling.   These ultra-shy birds quickly fled the scene when they saw me. 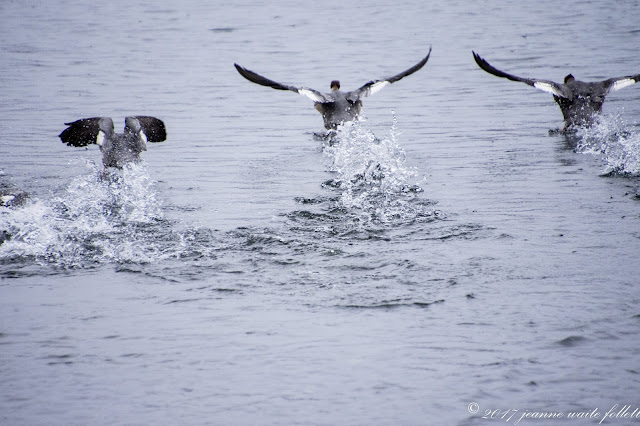 Taking flight meant a lot of running on water, as you can see the bird at right is doing. 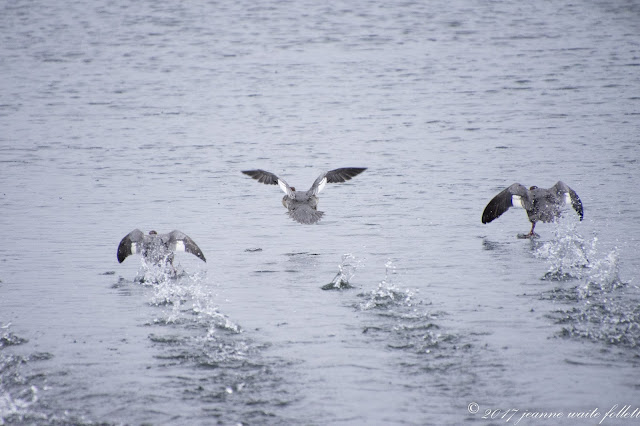 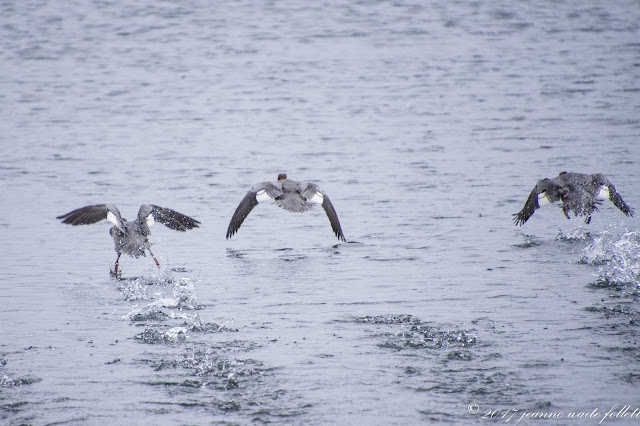 And we are airborne! 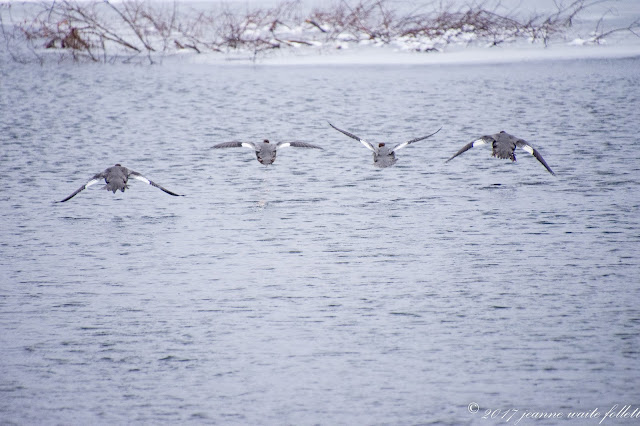 Only to veer to the right and land fifty feet away! 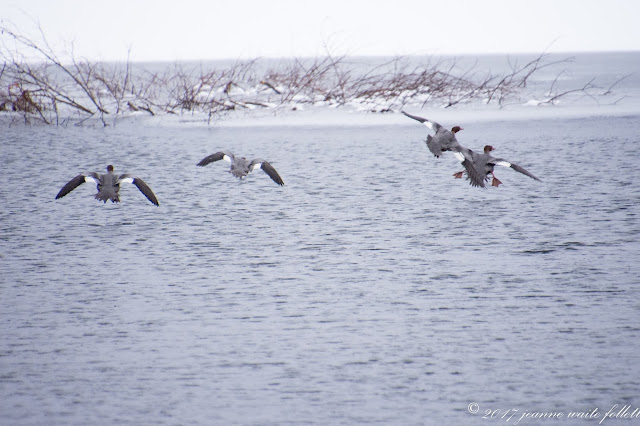 I don't know if this just-landed merganser is using its face as a speed brake, or if it's already looking for the little fish it eats. 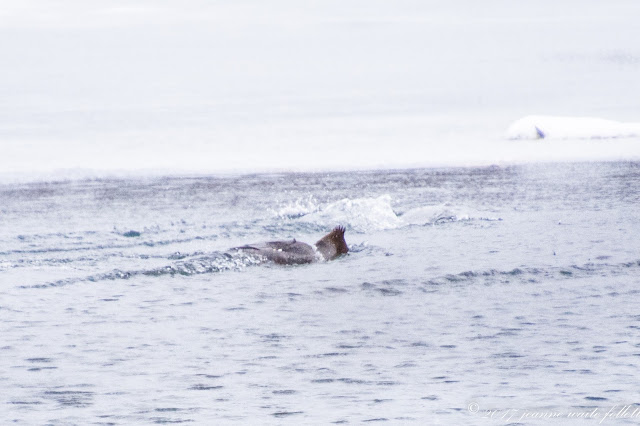 I walked over to the steps that lead up to the road and then down the other side of Dave;'s Creek. 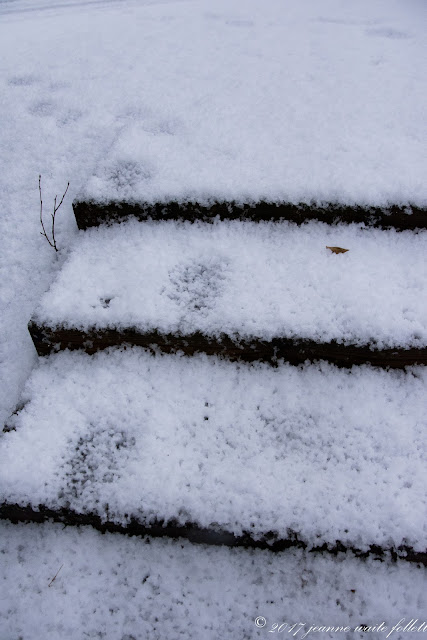 Aha!    That bear is getting braver and using the same steps that we do instead of avoiding the human-used viewing boardwalk. 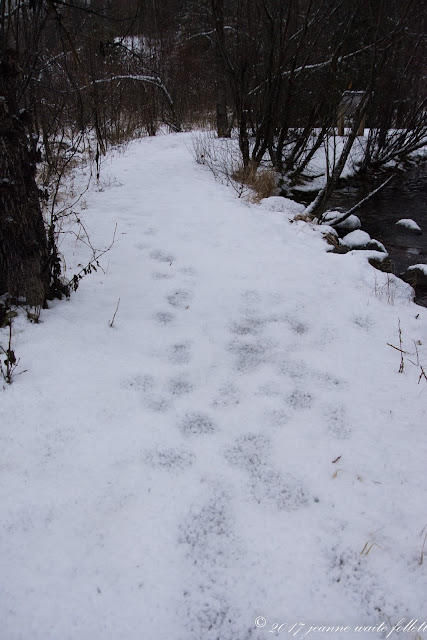 Oh, lots of bear tracks.   Either one busy bear, or a whole herd of them.


And another carcass off the trail in the woods. 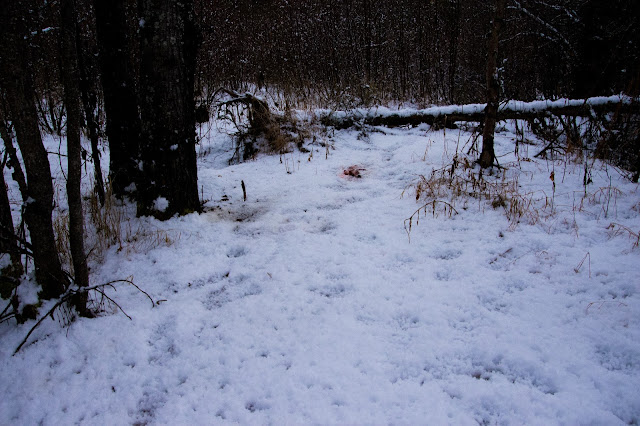 While I didn't see any bears, there were far too many prints around for my comfort, and I headed home.  I suspect the bear comes out to feed at night when there aren't any people around the area.

At home, I pulled the can of bear spray out of my pocket.  I was holding it upside down and noticed some small print on the bottom of the can: 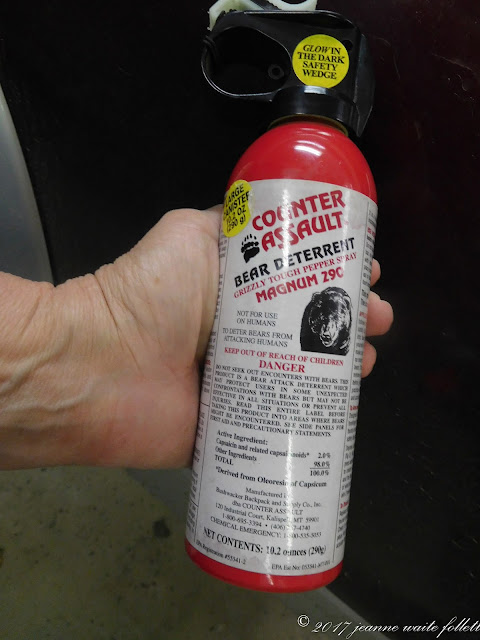 Guess I better open the two-pack I just bought at Costco. 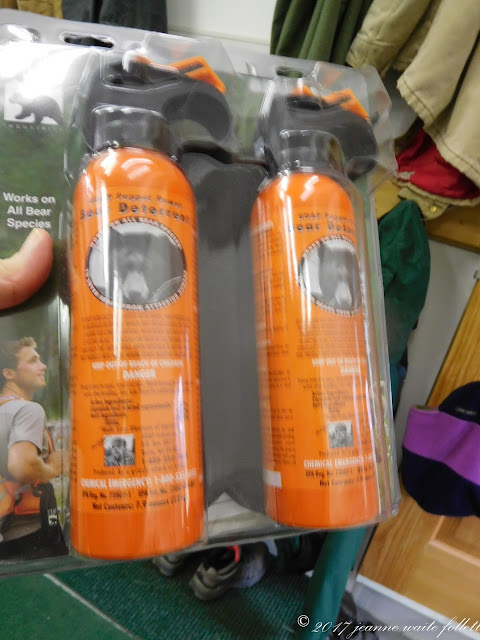