The 2018 Africa Jounrals, Ch. 11: Off to Phinda Private Game Reserve on a Wing and a Kerfuffle


Nothing like having a welcoming group when you land at an airport, and at Phinda Private Game Reserve, there was a group on both sides of the airstrip as we taxied to a stop. 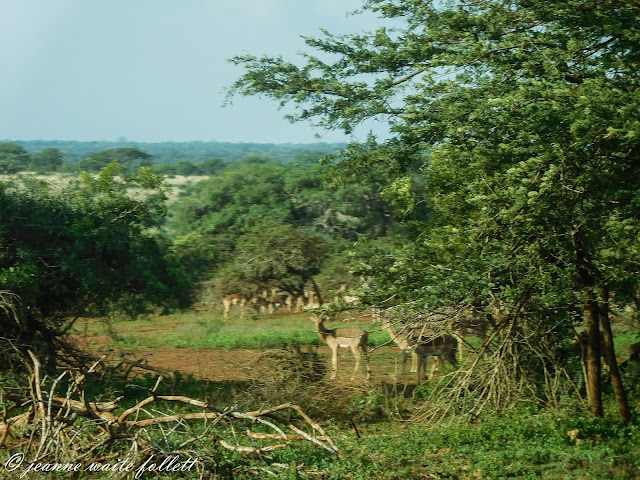 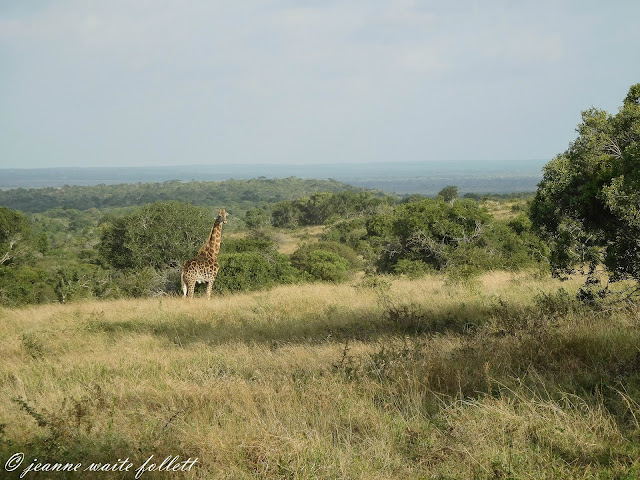 On one side, the long necks of giraffes stuck up over the trees while impalas grazed underneath.   And on the other side, there were several safari vehicles, their drivers…..and Amy.   Amy would be our safari ranger/driver for the next few days.

Joyful, irrepressible Amy.  “We should adopt her,” I said to Marg.    Laura, with profound understatement, said, “I think we should ask for someone with more enthusiasm.”

Getting to Phinda (pronounced PIN-dah) was a bit of a kerfuffle.  Our charter flight was routed through Nelspruit and the Kruger Mpumalanga airport.   I love saying “Mpumalanga.”  On my first trip to Africa, the guide said the way to remember it was to say, “Mah-puma-longa-than-yours.”   Works every time. 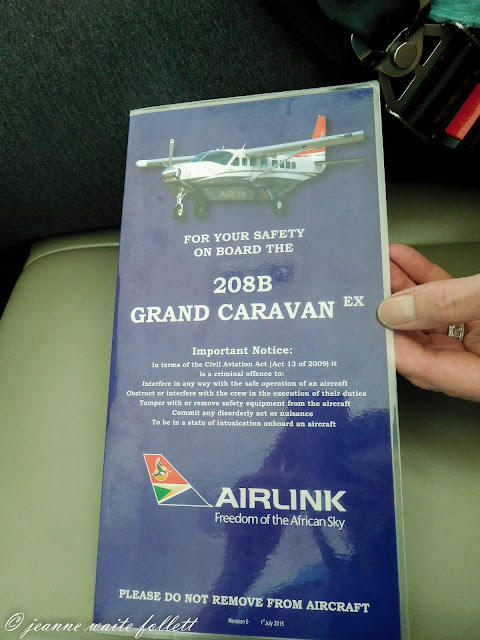 Anyway, plans changed.   I was wandering in body and mind while the others were paying attention, so I missed some of the reasons why we changed pilots and planes.   There was something about a family group bringing too much luggage so a change of planes was necessary.

We were escorted to a VIP lounge to wait for the plane.


I wandered down the terminal concourse, saw a sign that read RESTROOM, and went in.   I was looking for the wonderfully painted sinks that I recalled from a prior visit.

Well, heck.   These sinks weren’t anywhere near as nice as I remembered them.   I glanced to the left and saw a line of urinals on the wall in an adjacent room.   Yep, I was in the men’s room.   Two store clerks were laughing when I exited the men’s room and I shook my head and smiled at them, acknowledging my faux pas.

When the larger plane arrived and we boarded, Marg, Laura, and I got on first.   Trust me, there was NO room for a beverage cart on this plane.  Getting to the front seats was possible only if no seats before that were occupied.

The other group got on and took all the rear seats, making it impossible for Holly to move forward to the only remaining seat.   Twiggy at her skinniest could not have moved forward to an empty seat.

Finally, the most slender of the family group moved forward, grousing all the while.  “FINE!” she said.  “I’ll move.”

Well, anyway, we were welcomed at Phinda by Amy, the giraffes, and the impala.  Once our bags were loaded in the vehicle, we set out of the main road, which was corduroyed and bouncy.   So, Amy swung off the main road onto a track that was rutted and bumpy and we bounced our way to a hillside covered in candelabra trees.


From there, it was a short distance to Zuka Lodge, where we were introduced to Telusi, who would accompany us on safari drives, and Sade, the manager. 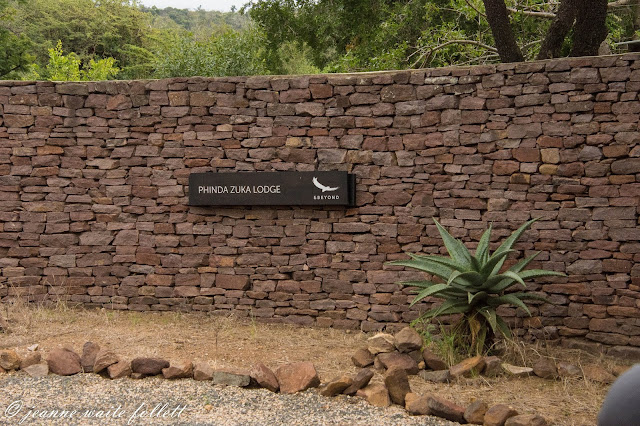 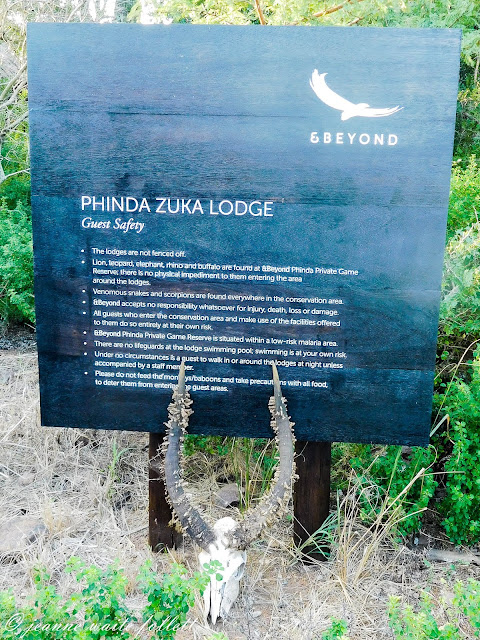 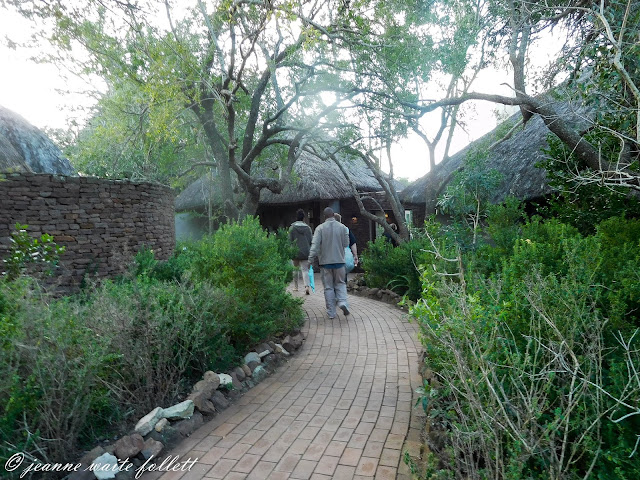 What can I say about Zuka Lodge?   There was a main lodge overlooking a water hole, and four stunning cottages, also overlooking the water.  Animals came and went at all hours, and it was best to check before you stumbled outside. 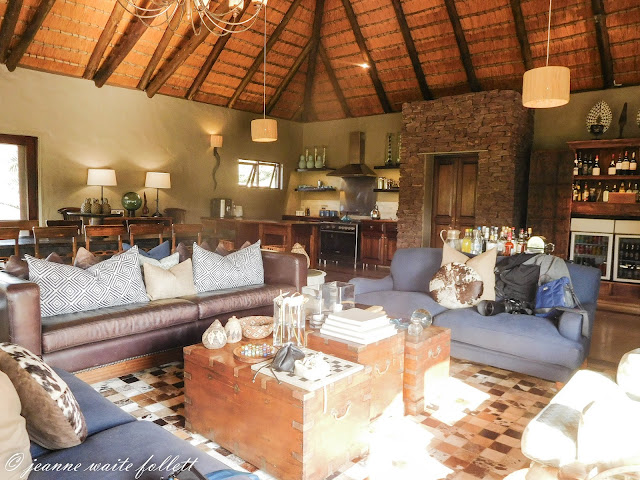 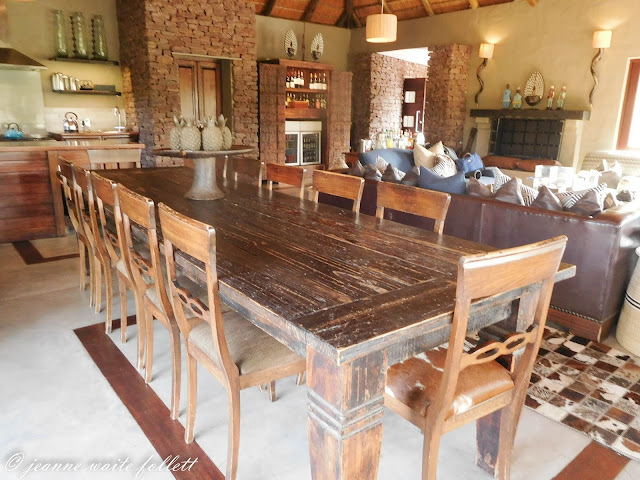 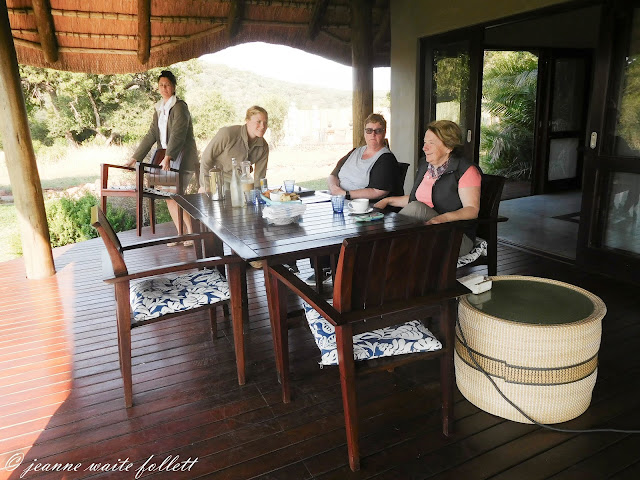 Holly and I were slated to share a cottage, but magic happened, and Sadi gave me the fourth cottage to myself.    With that, we had the whole place to ourselves! 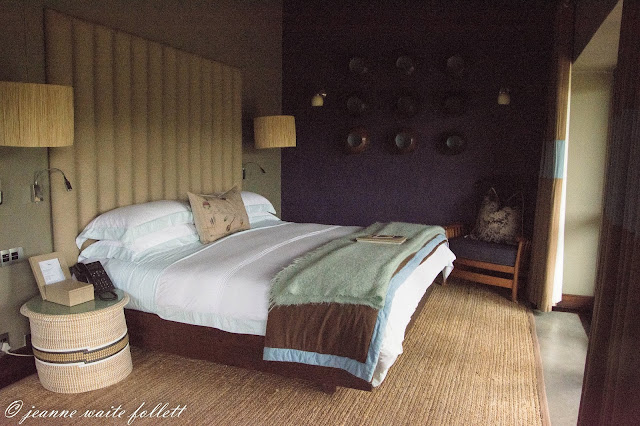 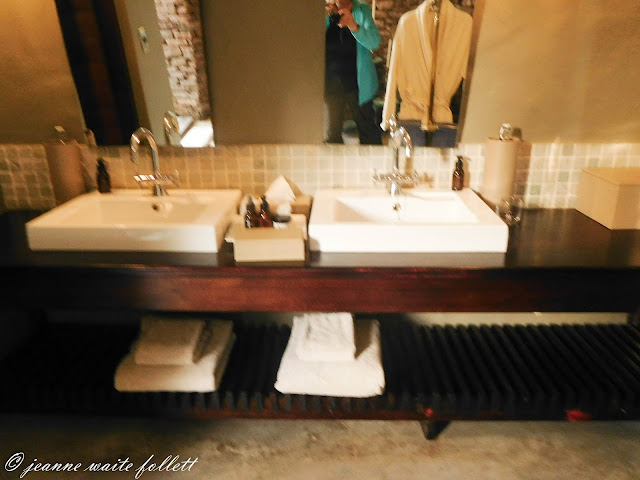 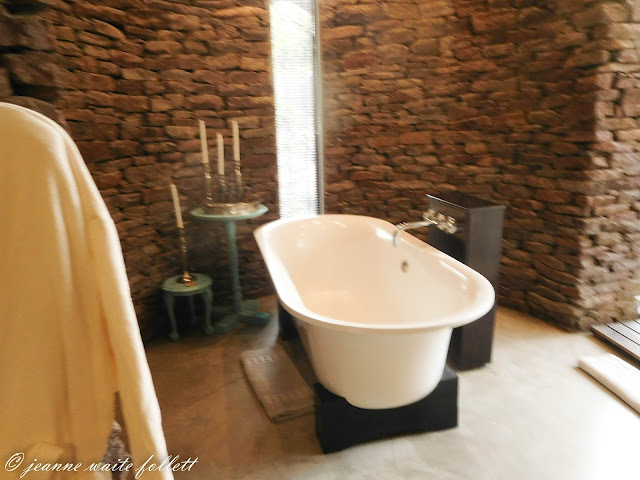 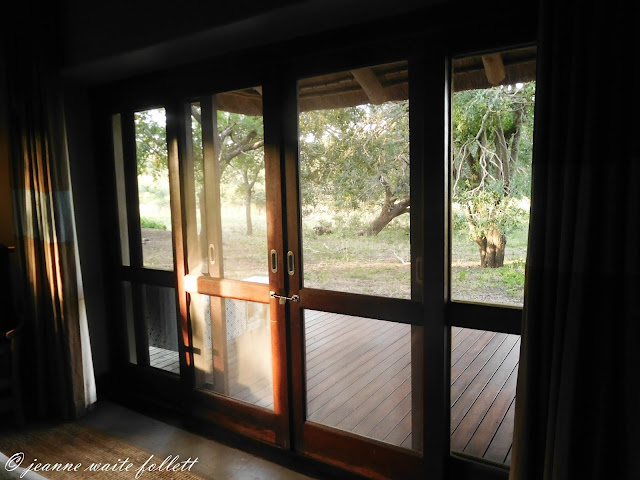 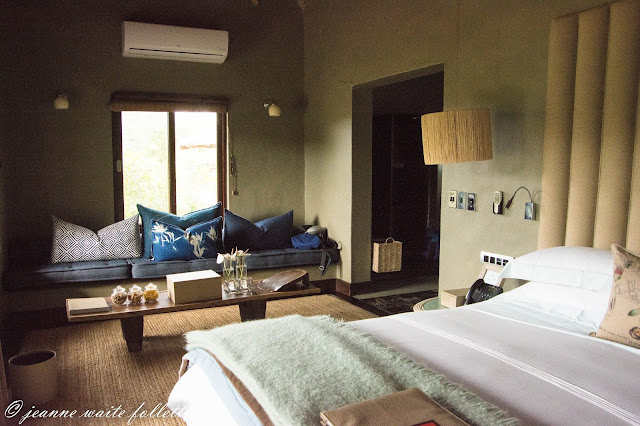 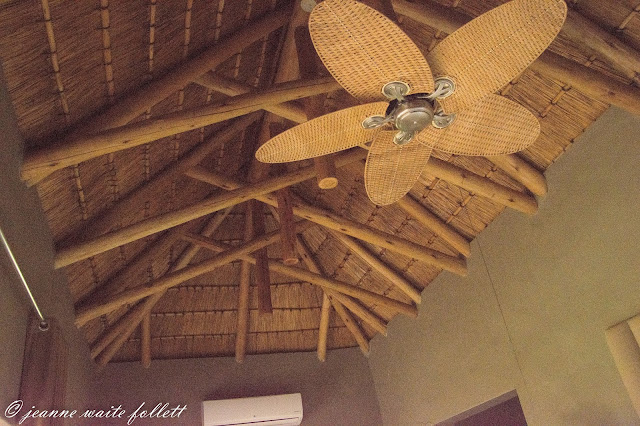 There’s something of a cultural difference in South Africa with showers.  There are no shower curtains and at Phinda and the next lodge on our itinerary, the shower walls were glass and looked out on the landscape.   At Zuka Lodge, the glass wall looked out on a rock privacy wall enclosing a small garden area, but at the next lodge, the shower looked out—floor to ceiling—on the world. 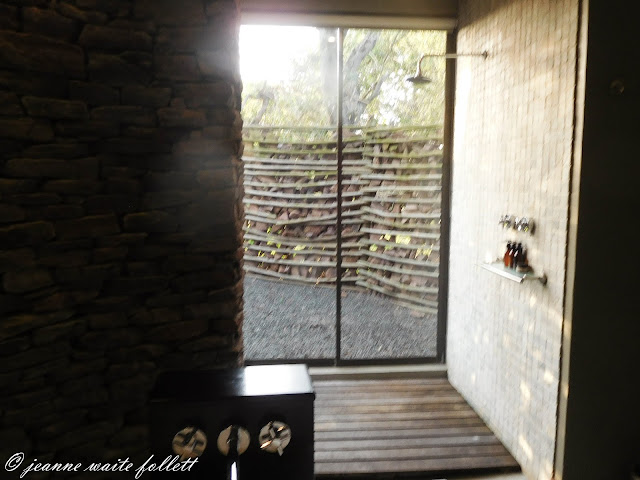 Right away we hustled to get ready for our first safari drive, which was later than usual because of the air kerfuffle.   Little did we know that we would wind up  in J. Paul Getty’s front yard with six lions.