Judging from the number of vehicles parked in the pullout, you would have thought it was summer, but the temperature was 15 degrees at Tern Lake late on an afternoon.

Along with a number of people, Serendipity was also skating on the frozen lake.  As a young boy used his hockey stick to free air in frozen bubbles in the ice, Serendipity brought four long-time friends together as the setting sun turned the horizon pink.

Hoar frost adorned everything and bald eagles flew overhead, waiting until the people left so they could get back to snatching salmon from the open areas of the lake.

After the hugs of greeting, the friends do what Alaskans always do—they tell small world stories of running into friends in exotic places around the world, of connections unknown and unanticipated and delivered by strangers, and of adventures of the wilderness kind.

No hats, no gloves, but for one who was dressed for skating.   For a half hour they talked of long ago when they lived in the same town, just a few miles down the road.  Of jobs they worked in remote places, and special stories of wild animals they encountered and the memories they held dear.   They spoke of friends, children now grown, and things they want to do.

And then they parted, until the next time when they will take up right where they left off. 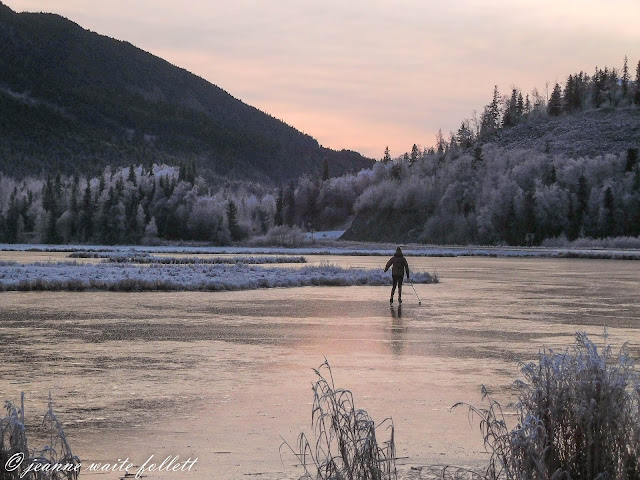 Gotta love that Serendipity.
Posted by Gullible at 2:46 PM