"A Night to Remember" and a book well-worth reading

On this night, April 14, one hundred and nine years ago, the colossal, “unsinkable” passenger liner called the RMS Titanic received a mortal wound from striking an iceberg during her maiden voyage from England to New York.  She sank by the bow two and a half hours after midnight.

A Night to Remember, first published in 1955 and now available in e-book format, author Walter Lord interviewed all the survivors he could find, carefully researched the events of that night, and examined the sociological and other international ramifications of this tragedy as he described the events of the Titanic’s last hours.  Thereafter, communication watches were extended to 24 hours a day, Ice Patrols were established to watch for icebergs in shipping lanes, and the complicated formula that decided how many lifeboats were required was simplified:   enough lifeboats for everyone on board.

(This book is available free with Amazon's Kindle Unlimited.)

In an era where the code of conduct demanded “women and children first,” men who survived were subject to cruel criticism.   J. Brice Ismay, chairman and managing director of the flagship’s owner White Star Lines, was vilified for surviving.   He became a recluse for much of his life thereafter.

It was also the end of class distinction in filling lifeboats, as passengers in steerage accounted for far more deaths proportionally than did first and second class.

In the Foreword to his book, Lord mentions a novel published fourteen years before the Titanic was launched.    Futility by Morgan Robertson invented a fabulous Atlantic passenger liner, much larger than any ship built to that date, loaded her with “rich and complacent people,” and then wrecked her on an iceberg one April night.

The similarities are astounding:

Both used the same type of propulsion system and could make 24-25 knots.    Both lacked enough lifeboats.

I’m sure you’ve seen the movie and/or the documentary of its discovery at the bottom of the sea.    Even with the abundance of information available today, I found this book interesting on several levels, enough to keep me up until 4 A.M. for two nights.

Now, I highly recommend you read this book. 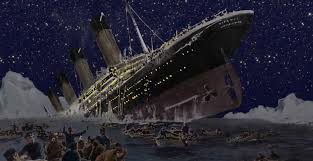