When Dave Daley told his wife he wanted a team of sled dogs, she said, “You better figure out how to pay for them.”

One of those ways resulted in the busing of a couple dozen of us to his dog lot outside of Churchill, Manitoba.  We were on a Road Scholar trip called Lords of the North and had spent the four previous days spotting and watching three dozen wild polar bears. 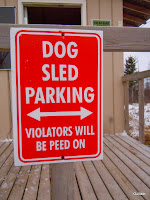 Now, on our last full day in Churchill, we were greeted by a pack of howling dogs.  And the Big Dog himself—the inimitable Dave.  With a line of blarney that belies his Metis (French and Cree) heritage, Dave entertains tourists with a humorous and educational spiel before giving them rides on either sleds or a carriage, depending on snow conditions, or the lack thereof.

I was looking forward to this, being a retired dog musher myself.  I was curious about advances in equipment, feeding methods, and training styles.  And the dogs.  Very much interested in the dogs.

Then I met Dave and suddenly I was in my own dog lot twenty years ago, stuffing straw in dog houses, cleaning up their deposits, and giving lots and lots of hugs.  Dave talked  for quite a time before we went outside to actually meet his dogs and to be introduced to the various equipment involved in running dogs.

Before that, however, the inevitable subject of what happens with dogs that can no run with a team, or who are terminally sick or injured, in a land where the nearest veterinarian might be hundreds of miles away.

That’s when Dave won my heart.  And made me cry.

He spoke of spending time with the ailing dog, telling the animal how much it was loved and appreciated, and how much it will be missed.  Then, Dave said, he asks the dog to return in spirit to the dog lot, to be with them always, either in spirit or in another dog.

That’s when the tears ran down my face.  I remembered long ago dogs I loved with all my heart and how much they are missed to this day.

Dave is the originator of the Hudson Bay Quest race, patterned after the Iditarod and the Yukon Quest races in Alaska, which he would very much like to enter some day.   His race involved travel on the ice of Hudson Bay and the likelihood of polar bear encounters, so when they blazed a completely on land routes, he breathed a sigh of relief.  While there remains a chance of a bear encounter, the odds are now far against it.

That evening, Dave came to the Churchill Northern Studies Centre and spoke to our group. 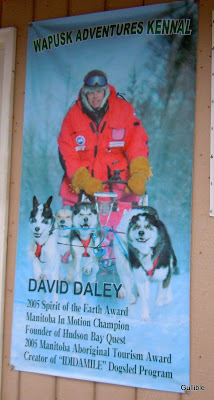 His family has lived in Churchill for several generations, and has known the bias against descendants of the First Nation peoples.

When he was a child, his mother kept telling him he was descended from the French voyageurs and he was not allowed to learn the traditional language and practices of his Aboriginal people.  Now, however, Dave is considered a community leader and teaches the town children in the old ways.

He has received many awards for his volunteers efforts. A couple years ago Dave ran hid dogs from Churchill to Winnipeg, a distance of about 750 miles, all in the interest of promoting Manitoba.

With his wife Valerie, he owns and operates Wapusk General Store  in downtown Churchill.

But Dave wasn't done with us just yet.

The next morning, most of us would board a Calm Air turboprop plane, bound for Winnipeg and our connections from there.  Dave has worked for Calm Air for many years as an aircraft mechanic.  Dave would be on our minds for a long time to come, as would the staff at Churchill Northern Studies Centre, the town and people of Churchill, and those magnificent polar bears of Hudson Bay.