Coming down strong at a wind-driven, forty-five degree angle, the rain etched a pattern in the air as surely as it were on glass.

Just the day before, the propane delivery truck had filled my large tank and the price per gallon had jumped 43 cents in less than three months, now at an outrageous $5.17 a gallon.

That’s why I was standing with my chain saw in hand on a huge pile of wet, slippery spruce logs, considering my sanity with a none-too-gentle scrutiny.   “Why don’t I just buy firewood?” I asked Julie, who was below me on the ground loading the wood onto a small trailer. 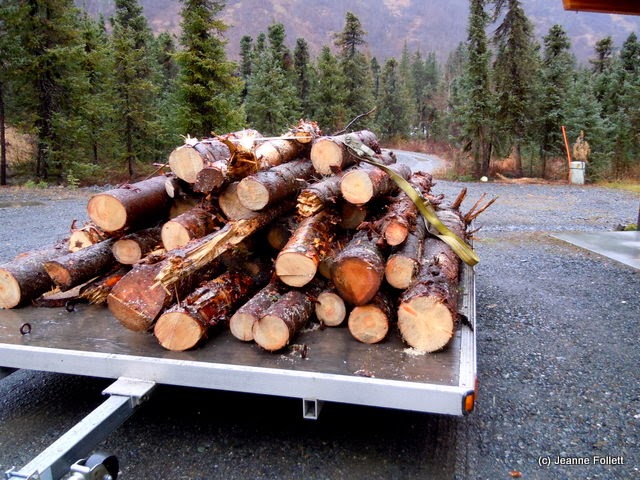 I was soaking wet and covered with saw dust.  I was on my second pair of gloves and they were as wet as the first.  I’d had enough wood cutting for one day.

A $50 increase!   That’s um…  Er….  Uh…   Twenty-five percent?   My math skills, never my strong suit, have deteriorated to a shameful degree due to non-use.

A couple weeks ago, I heard on the news that we seniors who receive our monthly “entitlement” from the government might get a 1.5 cost of living raise on Jan. 1.   Whoopee.   A whole $22 a month for me, some $3 of which will be gobbled up by Medicare premium increases and Federal income taxes will take another bite.

“Entitlements” is a fighting word where I come from.  “Entitlements” are not Social Security payments to me.   I paid into that giant Ponzi scheme my entire working life, starting when I was 16 and working in a small candy-making operation as a kitchen helper.   I earned that Social Security check and that was the mandated form of retirement savings that I grew up with.

“Entitlements” are what Congress awards itself:  large salaries and benefits, premium health care, living-large retirements, and –worst of all--an Obabacare carve-out with premium subsidies.    Even the staffers were granted subsidies for their health care premiums because members of Congress were afraid their staffers would leave for other employment because they could not afford their increased premiums.   “Brain drain” they called it.  The answer?   Let the commoners pay it for them.

That $22 a month increase in Social Security won’t even come close to covering the increase in my monthly propane bills.  It will cover the cost increase in my morning tea, which went from $2.62 a box to $3.67 a box at WalMart recently.   And that herbal remedy I use to help keep the hot flashes and night sweats at bay?   Same price at $19.98, except the box now contains 60 pills instead of 98.

Do Social Security and Medicare need reforming?   Absolutely, because of the large number of post WWII babies are now reaching retirement age, and there aren’t enough younger workers paying into the fund to keep the money flowing.

Will there be entitlement reform?   My cynical self says no.   It’s political suicide for any elected official to bring it up.  Even though it’s the wisest and best-for-the-country thing to do, a politician’s first instinct is self-preservation and getting re-elected.   And for that, I don’t have an answer.

In the meantime, a recent news item claimed that an audit revealed Treasury has paid out more than $110 billion dollars in earned income credits to people who weren’t eligible for that credit, in the last ten years alone. Are they going to fix it?   No, because those who are "eligible might be discouraged from applying"!!!???


In the meantime, I have to go cut more firewood to supplement my propane heat.   Oh, full disclosure:   I like cutting firewood because,


Until someone takes my chain saw away! ♫