Henry Stanley, dispatched by the New York Tribune on a secret mission to find the missing hero Dr. David Livingstone, was finding that everything in Africa bites, stings, or scratches.  He had malaria, suffered dysentery from drinking the water, and even came down with smallpox.   An early morning hunt in his favorite pajamas resulted in Stanley making the acquaintance of barbs and cactus spines when he tripped and fell.

When he was well enough to travel, or be carried on a gurney, his trek pressed onwards towards Ujiji on the eastern shore of Lake Tanganyika, hoping that he would find the missing man or at least hear of his whereabouts.
***

Livingstone wasn’t missing.   He knew exactly where he was all the time and he wasn’t happy about it.   He was many miles from Ujiji, now stuck in a small village occupied by the hated Arab slavers and dependent on them for his very existence.

Porters had absconded, taking with them his precious medical chest that contained the medicines he could have treated his malaria, chronic dysentery, pneumonia, and the bone-eating tropical ulcers on his feet that were now infested with maggots.

Eventually, Livingstone recuperated enough to make his way to Ujiji, traveling through country inhabited by cannibals and warring tribes.  Upon his arrival, he was crushed to find the Arabs had plundered his supplies, and he was now destitute and again dependent on the slavers for his welfare.

No, Livingstone hadn’t known he was missing, so he was pleasantly surprised to learn that a white man had entered the village.   Then he saw the man, who doffed his hat and said, “Dr. Livingston, I presume?”   But Livingstone politely assured the newcomer of his identity and then learned the man was Henry Stanley, sent by an America newspaper to find him.  “I thank God, Doctor, that I have been permitted to see you,” said Stanley.

“I feel thankful that I am here to welcome you,” replied Livingstone. 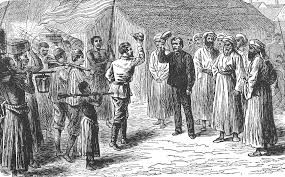 Stanley remained with Livingstone for some time, and the two explored together long enough to determine that Livingstone’s quest to find the source of the Nile would require even further treks.  Stanley returned to civilization, and a year later, still seeking the source, Livingstone died while kneeling to pray at his bedside on May 1, 1873 at the age of 60.

He faithful attendants, Chuma and Susi, decided that Livingstone’s heart should be buried in Africa, the country in which he spent his life spreading the Christian religion.   They removed Livingstone’s heart and other internal organs, placed them in a metal box, and buried it under a tree in what is now Zambia.

Then, in an incredible act of love and devotion, Susi and Chuma prepared the body for travel by salting it and exposing it to the African sun for a month.   They then wrapped it in sailcloth and mats, disguising it to look like trade goods, and carried it 1500 miles to the coast.  Their nine-month trek was made longer than necessary to avoid hostile tribes, and where local superstition made natives afraid of dead bodies and would prohibit transport through their territories.

The preserved body of Livingstone was returned to Great Britain and buries at Westminster Abbey.

Stanley, his fame assured by finding Livingstone, went on to explore even more of Africa.   He died in 1904 in 1904.

As Russell Gammon concluded his talk about Dr. Livingstone, our river boat was nearing its dock on the Zambezi River.  His final words about Chuma and Susi transporting the body had brought tears to Gammon’s eyes.

At least, I think they did.  Hard to tell because I was looking at him through my own tears.

We are to leave Victoria Falls in the morning, but we have a couple more adventures before that departure, so off we go.
Posted by Gullible at 2:21 PM