I didn’t know either of those things so I board the coach blissfully unaware of what waited for me
The coach squeezed through the narrow streets of Old Delhi, all teeming with people, rickshaws, taxis, vehicles of every sort and size, and parked in an impossibly small spot.  It seems every other tourist coach in India has the same destination in mind today.

This is where, in 2010, two gunmen on a motorcycle sprayed a parked tourist bus with gunfire, injuring two Taiwanese.   A few hours later, a nearby vehicle was rigged to explode but the timers malfunctioned ad the explosives merely caught fire.

Our group makes its way through the large crowd of people at Gate 3 of the Jama Masjid, and climbs the 39 steps to the massive red sandstone gate.   We were previously told we would have to remove our shoes, as is the custom in mosques.   Also, we were to dress modestly, and not wear short skirts or shorts, or sleeveless blouses. 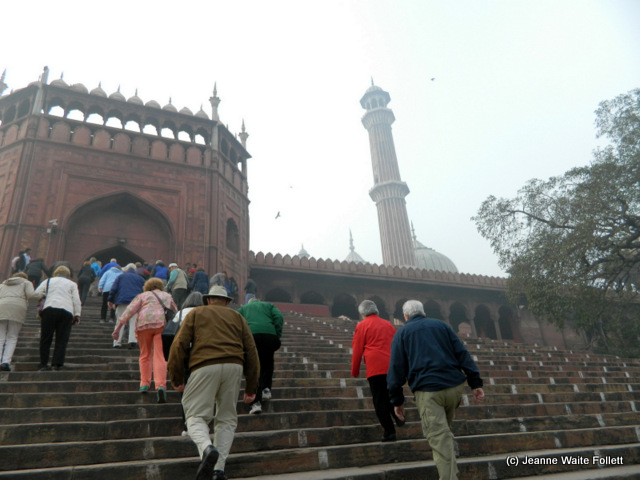 Two men were arrested and interrogated about the ambush and bombing.   One claimed he was instructed by an India Mujahedin imam based in Karachi, Pakistan, to target the mosque because the group was upset with the mosque’s imam for allowing “semi-naked” foreigners inside.

Hence, the fashion show--the covering of the semi-naked foreigners.

From an Indian travel site:

Travellers can hire robes at the northern gate. This may be the only time you get to dress like a local without feeling like an outsider so make the most of it.

I did NOT see any locals dressed in robes like this and looking this voluminous and shapeless.   Some of the ladies wore their robes like hospital gowns, others like bathrobes.   I did the best I could, trying not to strangle myself in the yards of cotton.

The name of the mosque, Masjid-i-Jahan Numa, more commonly known as Jama Masjid, means “the mosque commanding a view of the world.   It is built on a natural rise, thus requiring 30 or more steps to enter it.   It is also referred to as the Friday congregational mosque as many Muslims attend the Friday calls to prayer, where the courtyard can hold 25,000 worshipers! 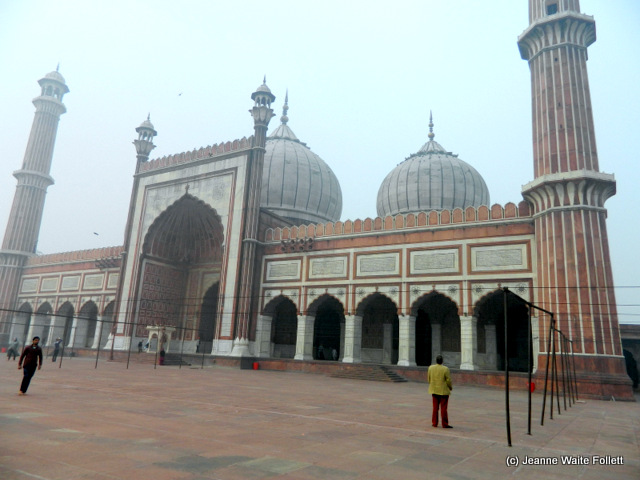 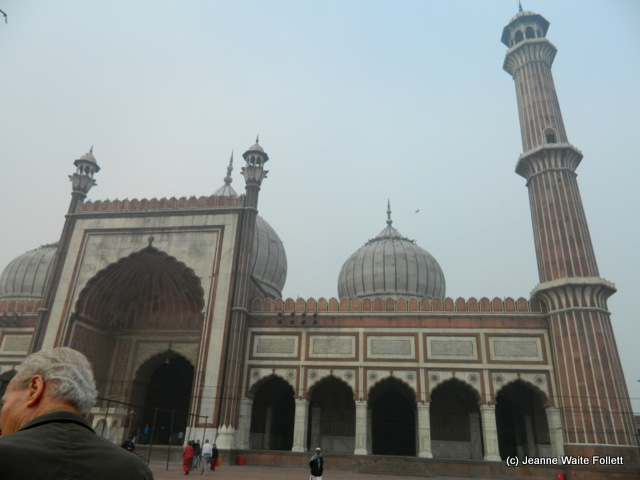 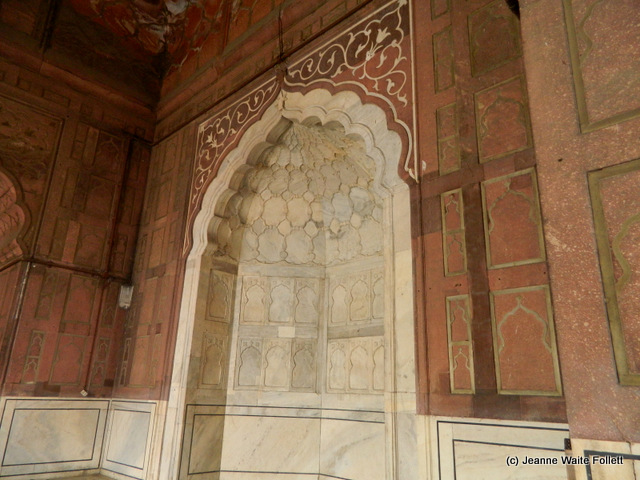 Five thousand laborers worked for six years and completed the buildings in 1656.    The prayer hall is 261 feet long, flanked by two 130 feet high minarets.   Three gold-plated domes cap the hall.   All mosques are required to face Mecca, and this one face to the west.


I entered the hall by climbing the steps to the platform five feet above the courtyard and walked through the main arch.   Inside, a barefoot man was kneeling in prayer.   He looked up, apparently more curious about the visitors than having his prayers interrupted. 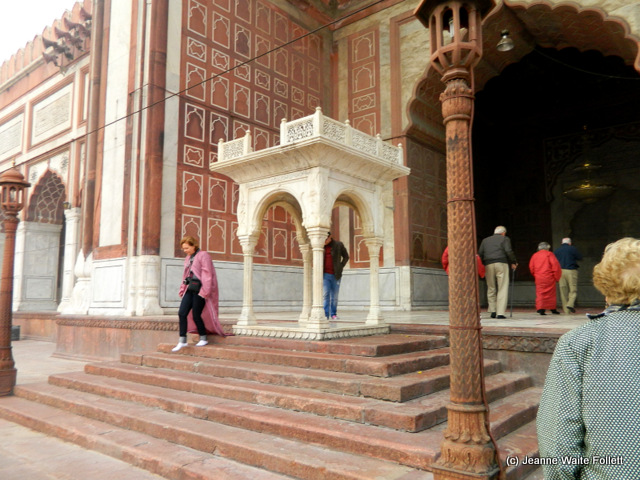 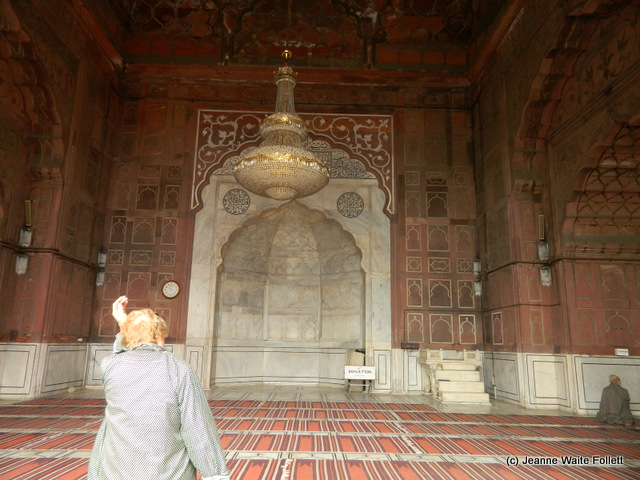 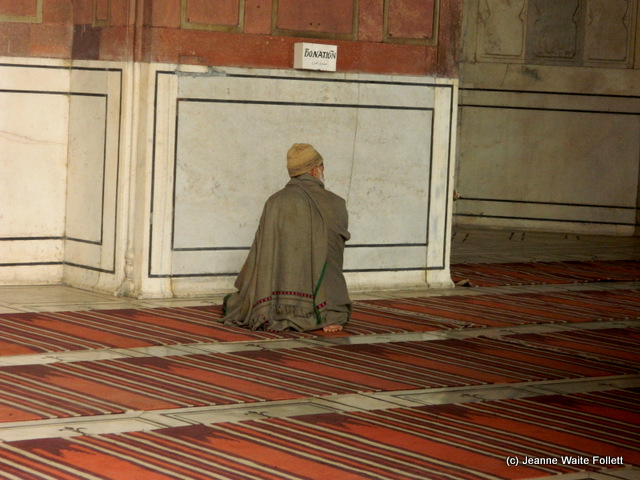 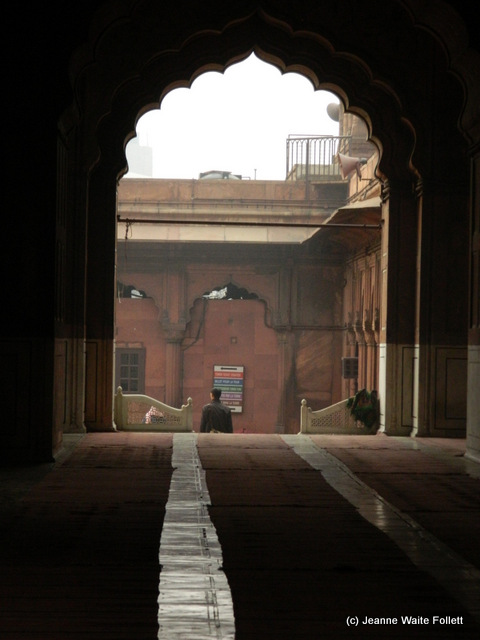 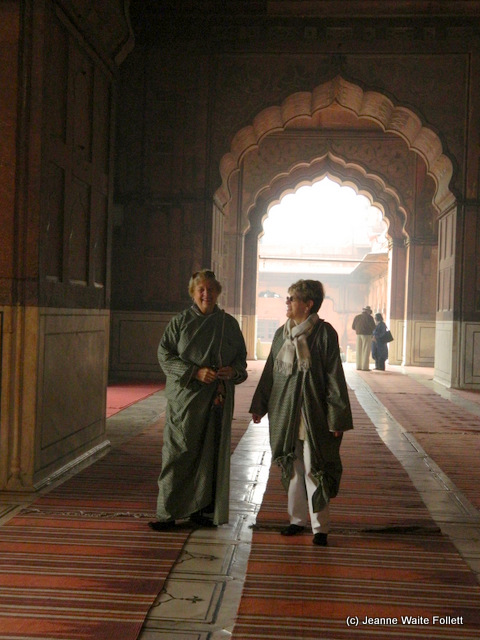 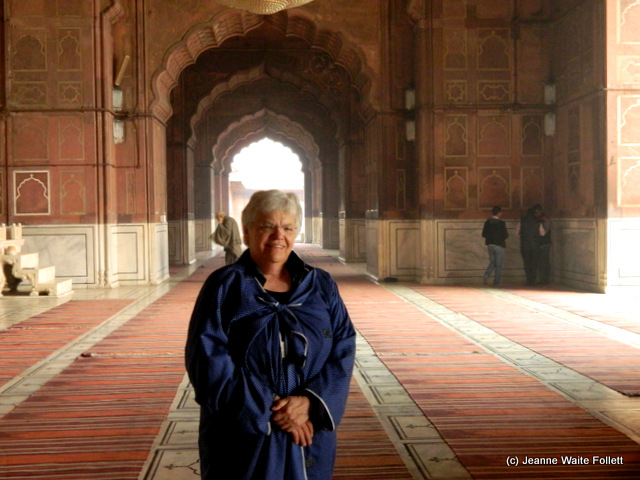 A short distance down the hall was a bookcase with a number of very old volumes on its shelved.   Dinesh had asked up not to touch the books as they were Korans.   I didn’t touch them; I took a photo of them. 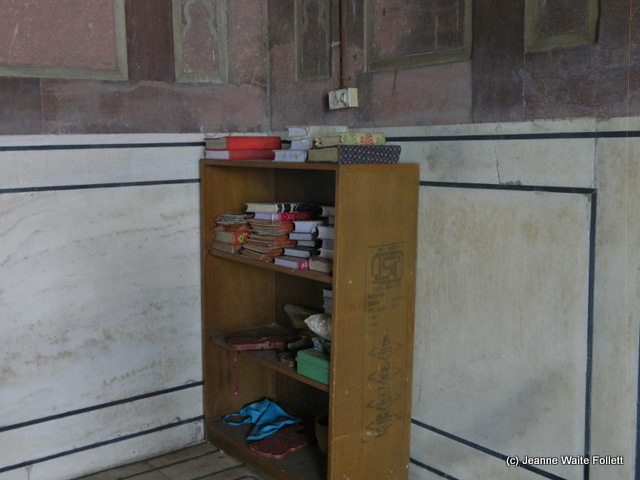 As I walked through the courtyard, I came across a sunken water pool, and not knowing its significance, walked on by without taking a photo of the simple, unadorned pool.

But in 2006, with a number of worshipers in the courtyard, someone carrying a plastic bag paused beside the pool long enough to leave the bag and depart.   The Wazoo Khana is where Muslims wash their hands and feet before praying.

Shortly after, an explosion rocked the courtyard, injuring 13.  Seven minutes later, another explosion went off a short distance away.  The mosque itself was undamaged.

We left the mosque through Gate 3, doffing our stylish robes and locating our shoes.

And then we walked down the steps and went to our parked tourist bus.   You know, right where two men on motorcycles had sprayed a bus with bullets.   They would have had  a number of buses from which to choose as their target this day.