The Fur and Feathers Journals, Ch. 11, In Which I'm on My Knees before a Huge Brown Bear and Don't Panic

It's another perfect day with the Coastal Brown bears of Cook Inlet.  We watch and photograph the fat, dark brown sow called—variously—Looper, Alpha Female, and, currently, The Old Sow, as she is about 20 years old.

The Old Sow is the mother of Crimp Ear (the bear with the two cubs), and her sibling Pavlov, who was killed earlier this year in a fight.   Pavlov was a favorite bear around here, and there is sadness in her passing.

Old Sow has had four litters, according to Rick, and kicked two sets out earlier.  Crimp is the only known survivor of all her litters.

By this time, my tripod is in four pieces.  The three legs are okay, except the padded feet keep coming unscrewed.   The ball head is a wreck.   Though the box said the head could handle 17 pounds, I have to hold it so the camera and lens don't flop onto one side of the other.

Even the extendable center column has come unglued from its other half, and the weight hook at the bottom of the column, used to hand something heavy to steady the tripod, is lying on the deck of my cabin back at the lodge.

Ron and I discuss my tripod on the way to a bear site.  He says I need a better head (camera mount) but I might be able to use the legs.

"I think its just a crummy tripod," I say.

The failed glue proves to be a boon as I can just lift the camera/lens from the tripod when we move, and reinsert it when we're on a bear, instead of carrying the whole weight with one arm or undoing the mount.

I find this "mal-arrangement" faster to set up on a bear.

We’re a short distance inland from the mouth of Silver Salmon Creek where silver (Coho) salmon enter on the incoming tide.  Old Sow sits on the far bank, about 40 feet away as this story begins.   She is intent on the creek, not on the seven mute people aiming long lenses on tripods at her. 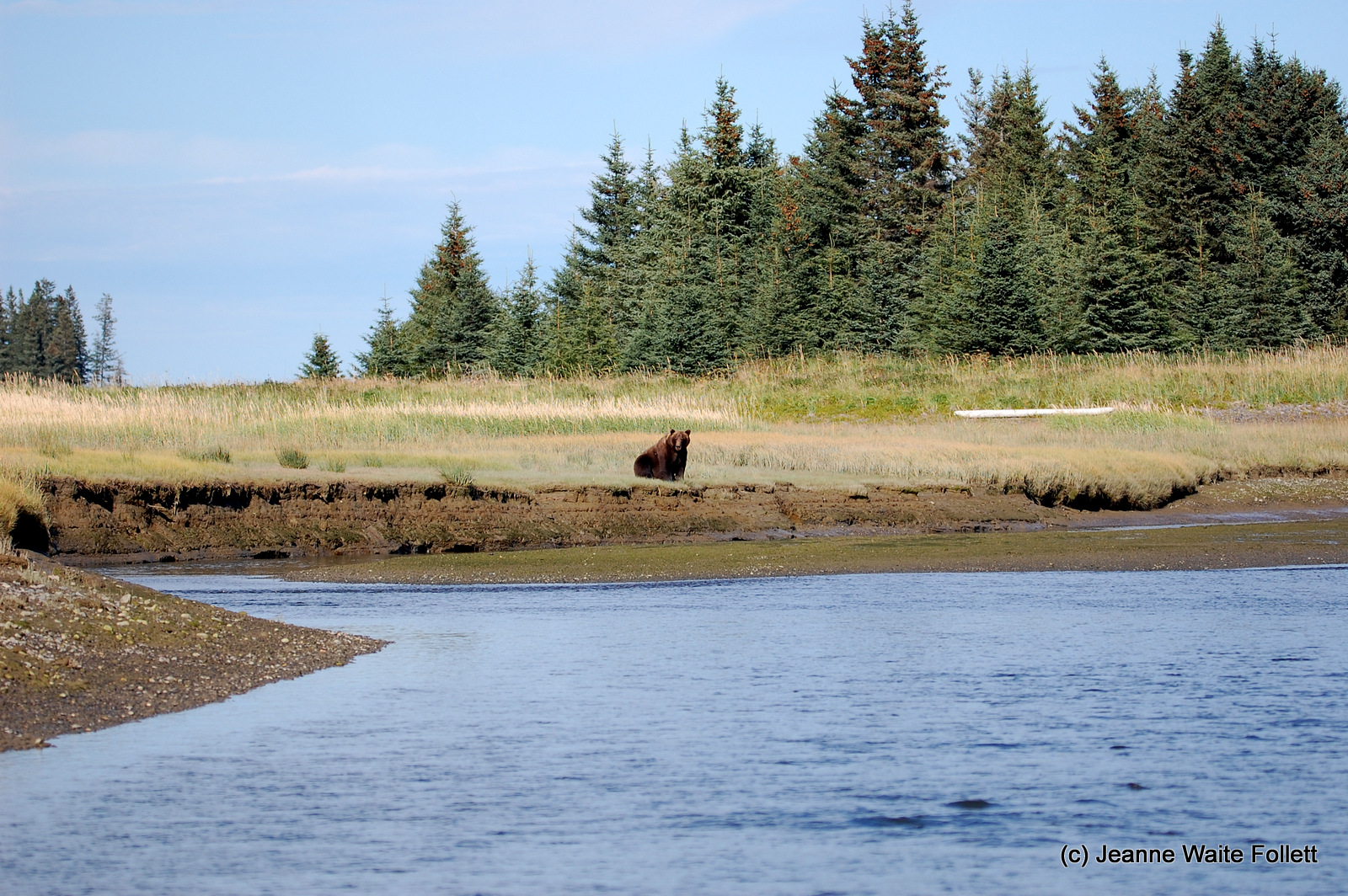 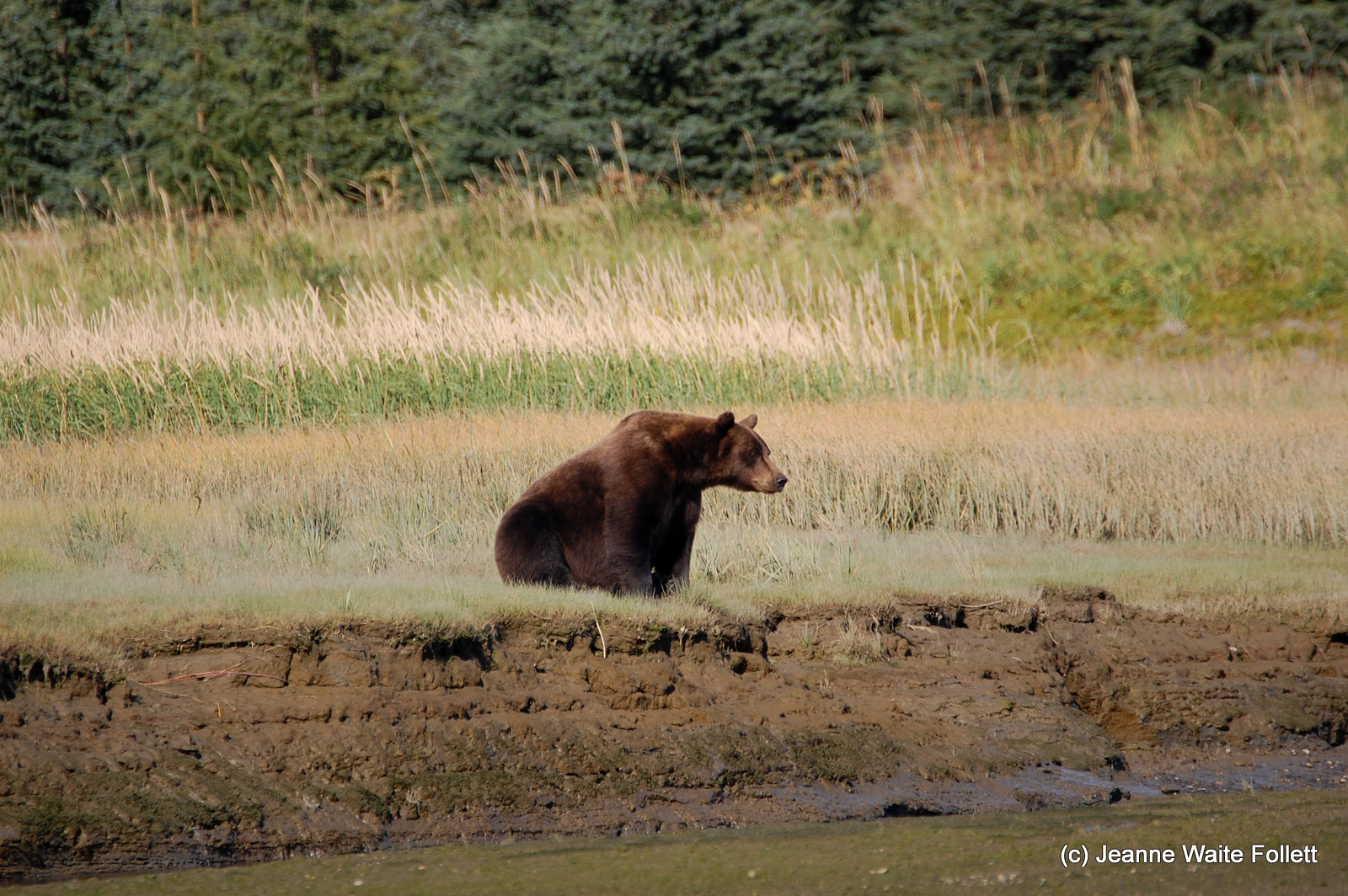 Old Sow listens for the slightest sound of a fish—a splash, a ripple, the least disturbance in the water that indicates a tasty salmon is there. 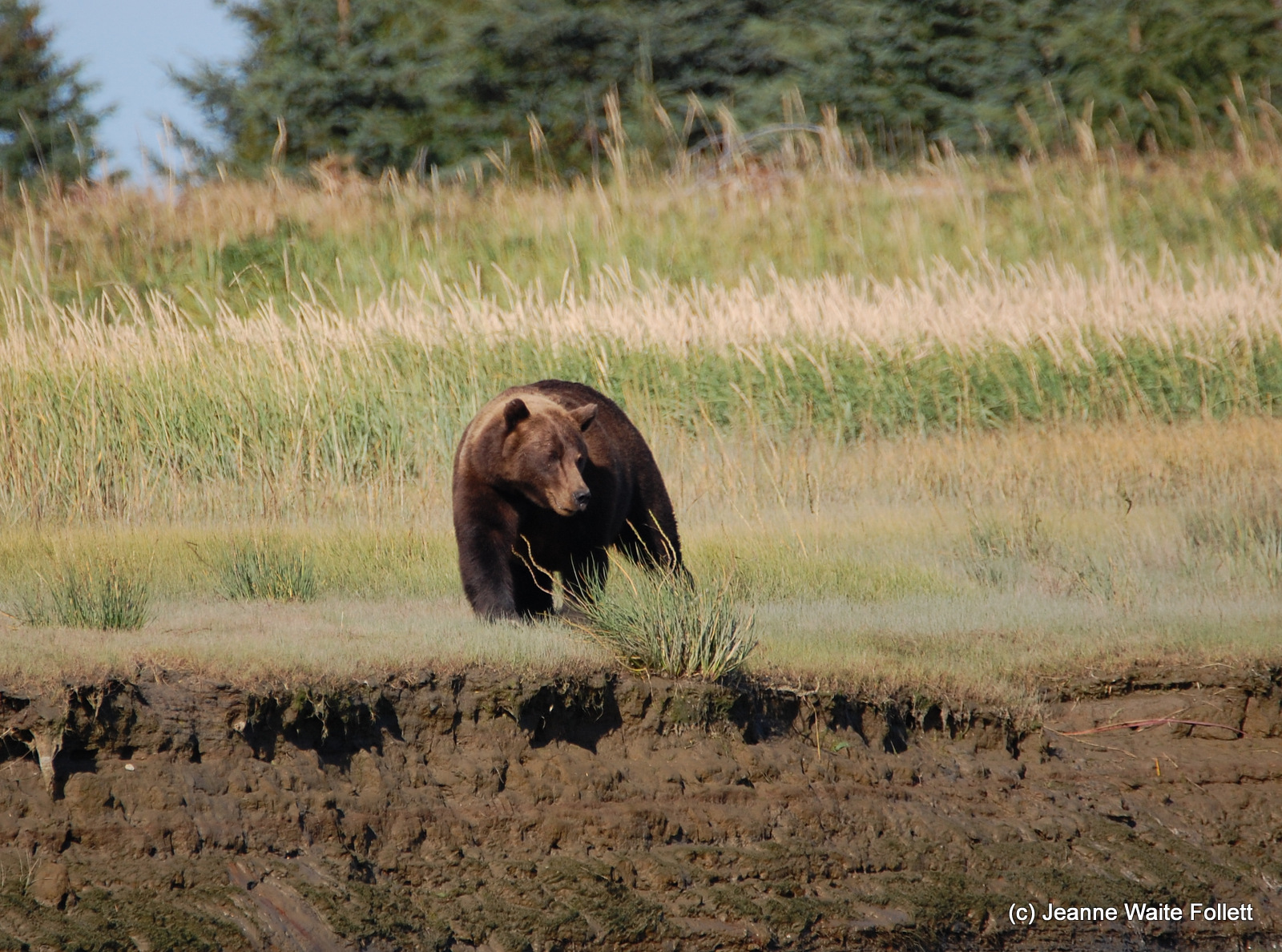 Something attracts her attention and she climbs down the slight bank to the water, her eyes on something to our right. 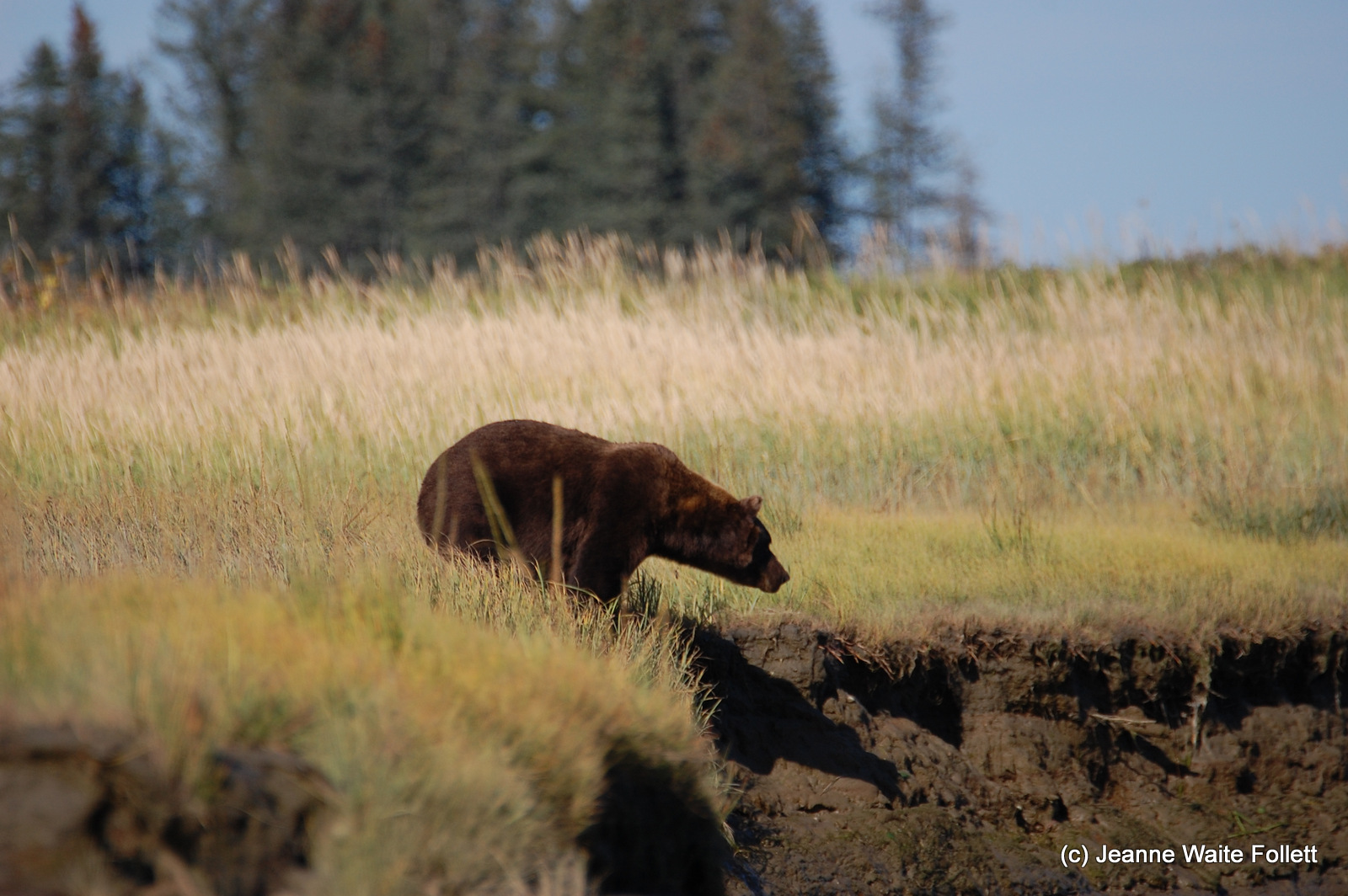 She begins to wade through the water in our direction, still intent on the same spot across from us.

I’m on my knees with the tripod legs retracted, snapping photo after photo.   Ron had suggested we try getting low to the ground to get dramatic shots of these beasts, and that's what I'm doing.  It's faster for me, too, because I don't have to go through the trouble of extending the legs on this wretched tripod, all of which needs to be done one-leg-by-one leg, section-by-section.

I continue to lag behind the others, though, so when Rick sets us up at a good spot, I wind up on the end of the line, closest to the creek. 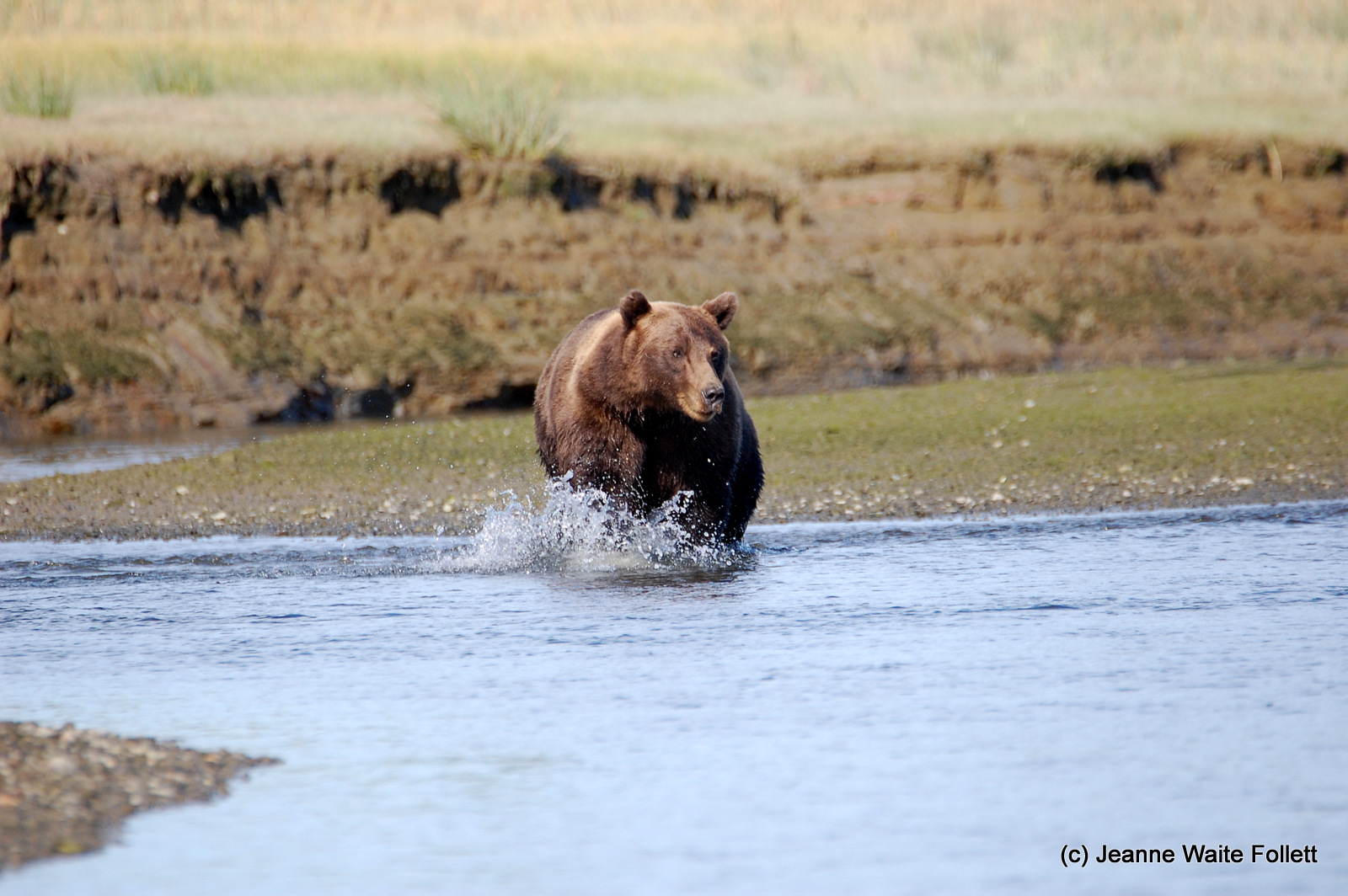 Half-way across the stream, she dips her head into the water, but comes up empty. 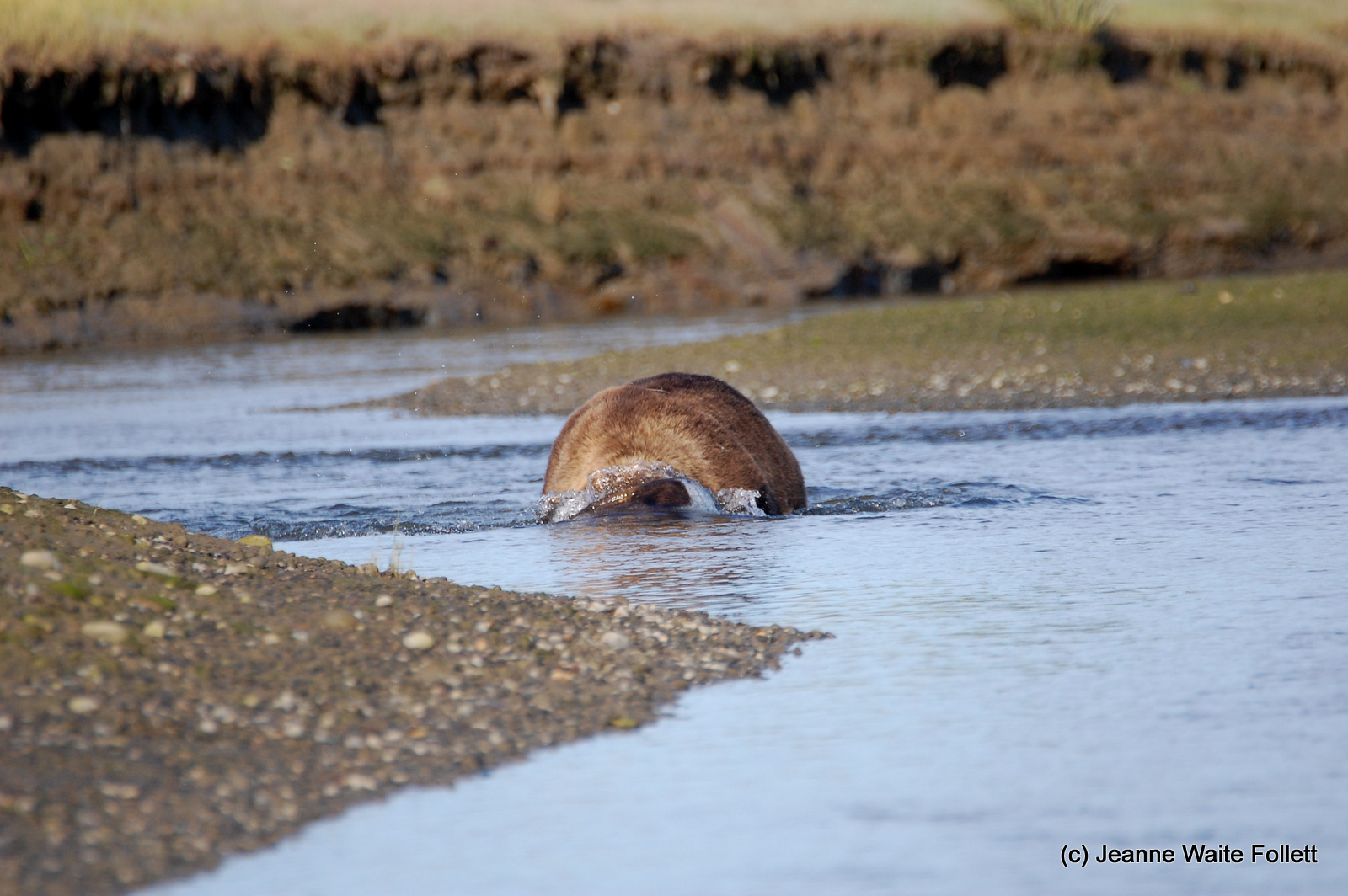 I’m retracting my long 600 mm lens, trying to keep her in the viewfinder and in focus.  She acts as if we aren’t there.

You know the warning printed on your vehicle's side mirrors that reads, "Objects in mirror are closer than they appear"?   Ditto with these telephoto lenses. 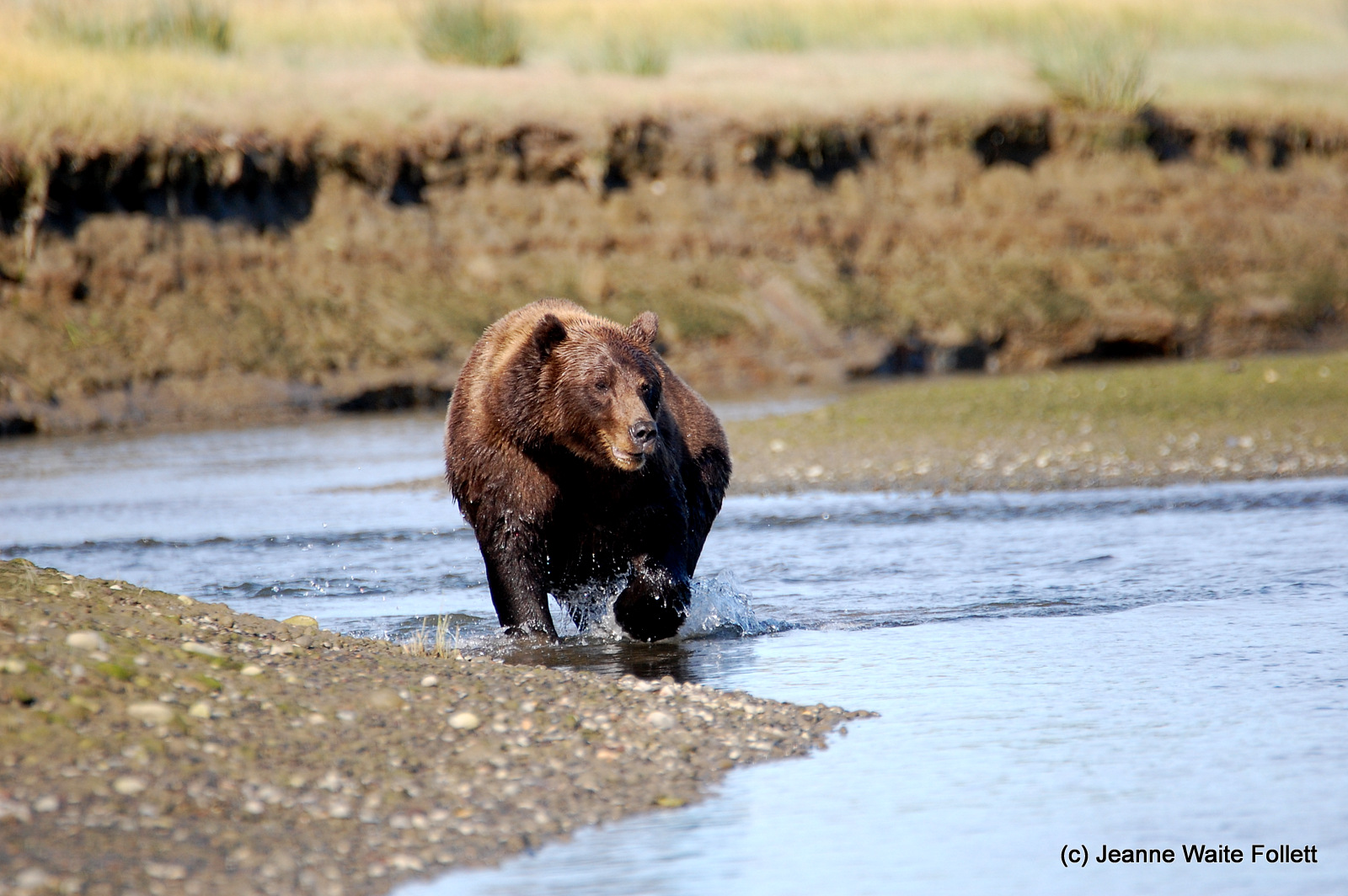 Quickly, she’s far too close.  Rick is behind me and touches my shoulder.  “Move over,” he whispers.   Easier said than done when I’m on my knees, but I manage to scoot over a foot or foot and a half.  I’m still pressing the shutter button.   “Far enough.   Don’t move,” Rick whispers. 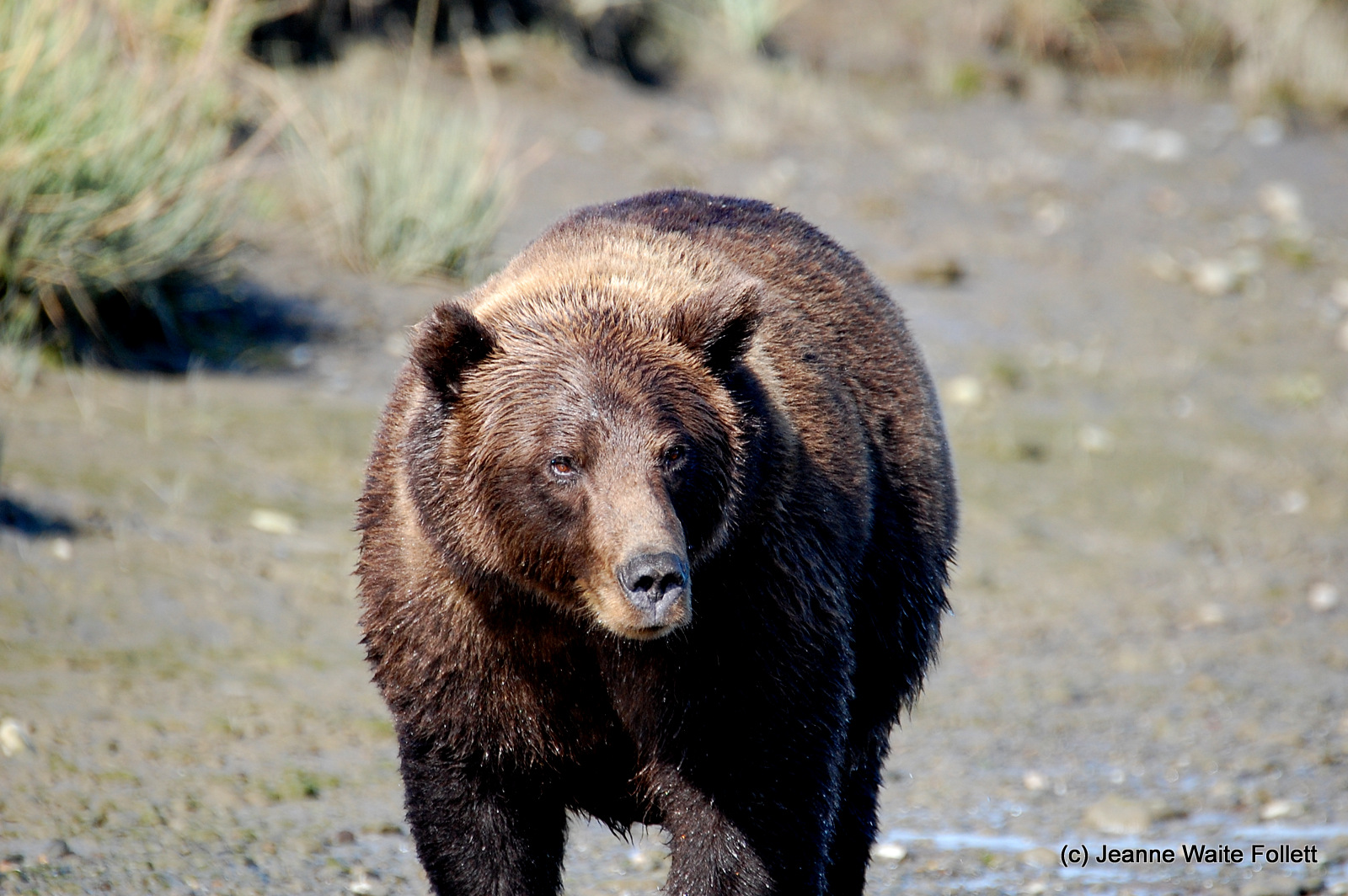 The idea here is to present a solid group, not individuals, while at the same time not blocking the bear’s path in any way.   Moving over just a bit gives the sow plenty of room to pass us.   Rick stands right behind me, the two of us presenting a larger presence at the end of a solid line.


I’ve been told that looking wild animals in the eye is perceived by them as a challenge, but I will tell you this:   When a brown bear is coming right at me, I’m reading body language like crazy and the eyes reveal a lot about intent. 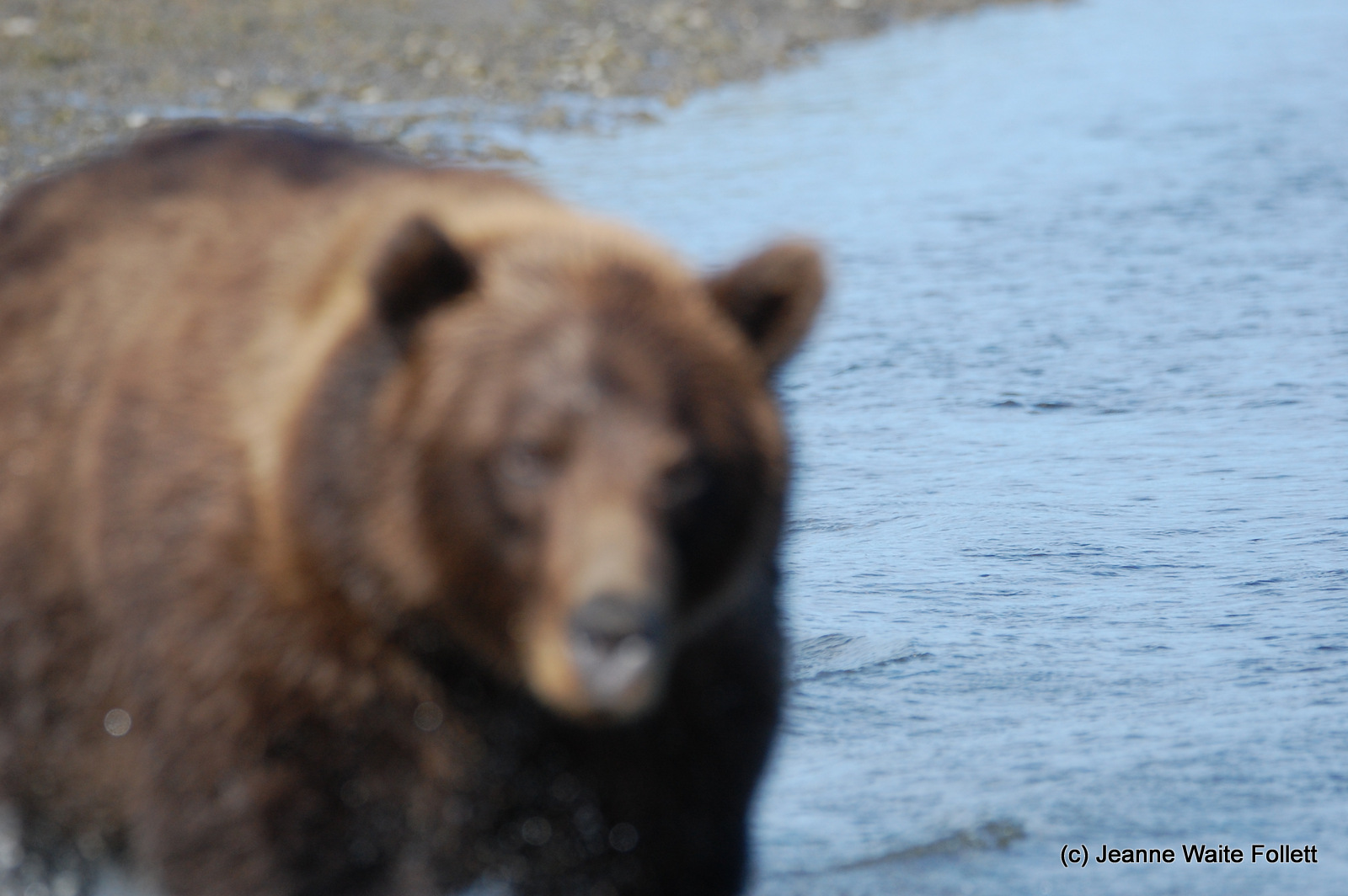 I'm still pressing the shutter button, no longer aware that Old Sow is not in focus or if she's even in the viewfinder.   I wasn't going to miss the story.   Rick said not to move, so I don't turn the camera for a close-up. 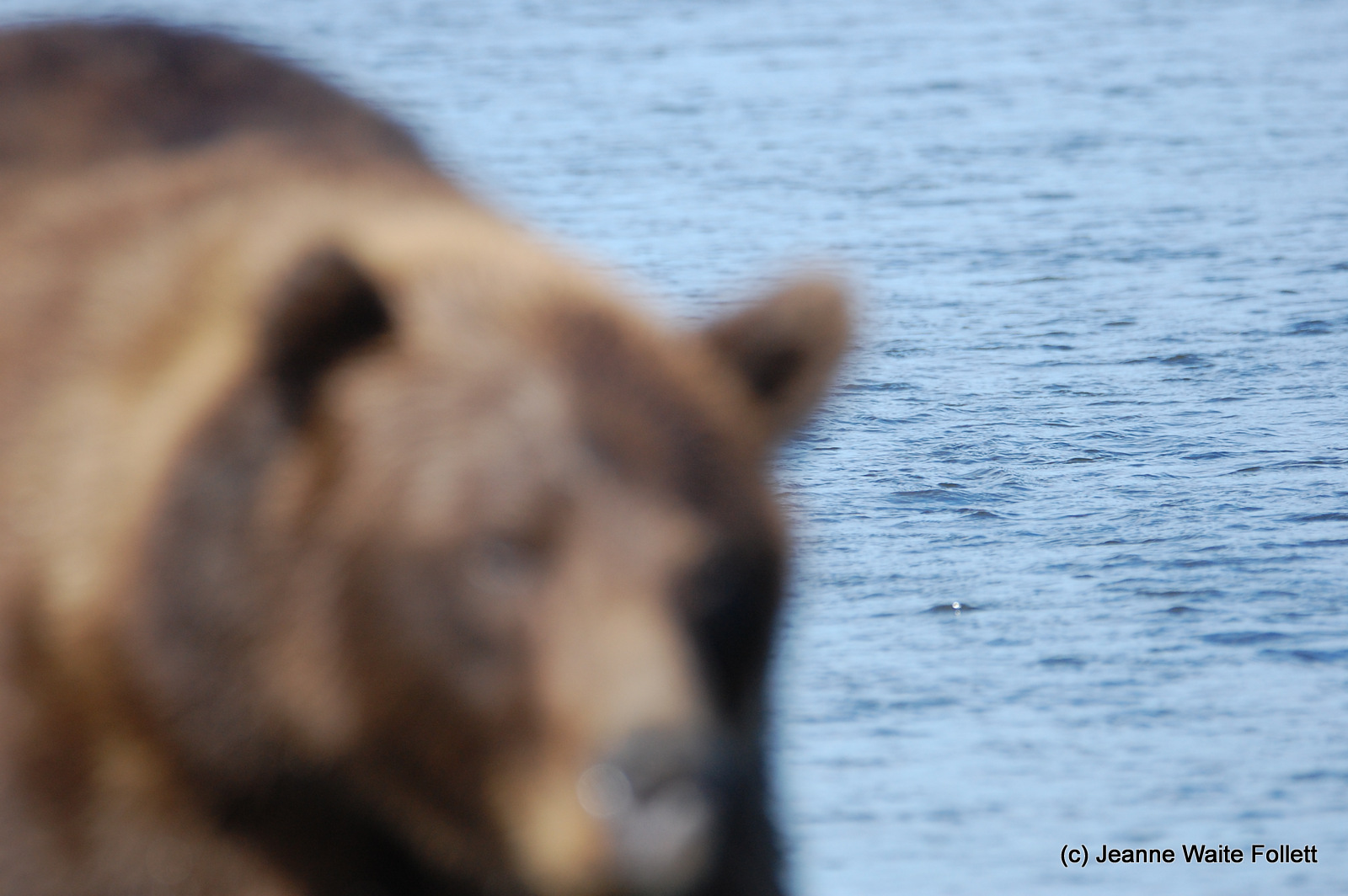 Her eye to my eye, Old Sow passes me on my right, her look indicating that I'm something of a nuisance that she must endure.  She splashes into the water, still going after that fish she'd been eyeing.

“Did anyone get a picture of that???!!!?” I ask.   None.   Not a one of these dedicated photographers took a photo of my close encounter with a brown bear!   I suppose they were asking, "Where was the art in that?"

“Five feet,” they agree, meaning that’s how close Old Sow and I were.   I look at her footprints in the mud and think it was maybe seven feet.   Then I remember how wide her body is and understand why they say five feet.

For the rest of the day, I razz my photographer friends for not getting a photo.   To be fair, the bear was far too close for their long lenses, and it was best that they didn’t move, lest Old Sow sense we were a danger.

Or perhaps they were waiting to film something really exciting involving me and Old Sow.

Nonetheless, this was not to be my one and only experience with Old Sow.

A short time later, a crowd of photographers have joined us near the same spot on the creek.   I think every guest from the two lodges is at the creek.   There are 15 or so in a line next to me and a bunch across the creek.

Old Sow is contentedly chewing on sedge grass about 20 to 25 feet from us, despite a line of perhaps 20 photographers and guides. 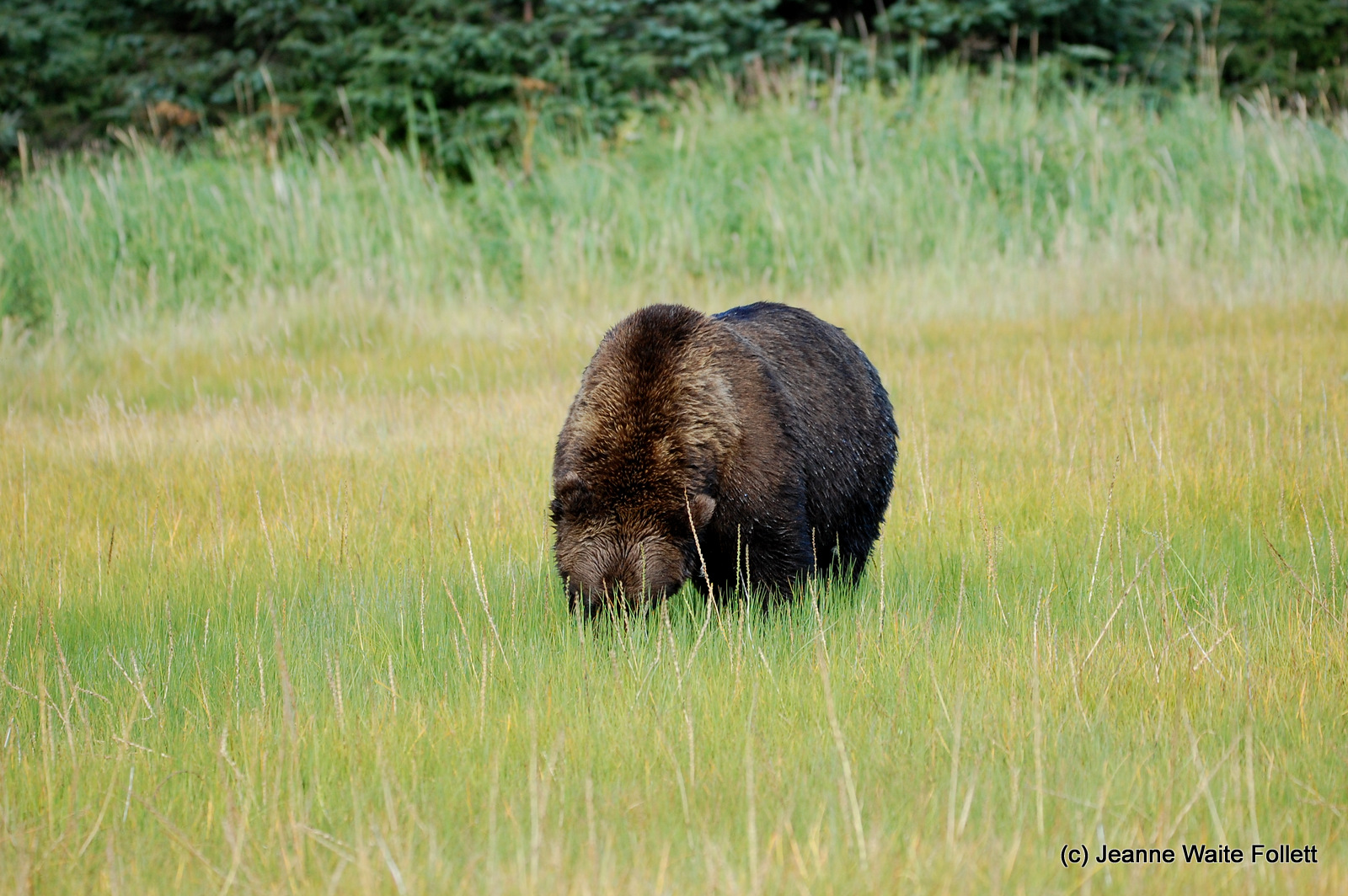 She sits to scratch an ear, munching on the grass in her mouth. 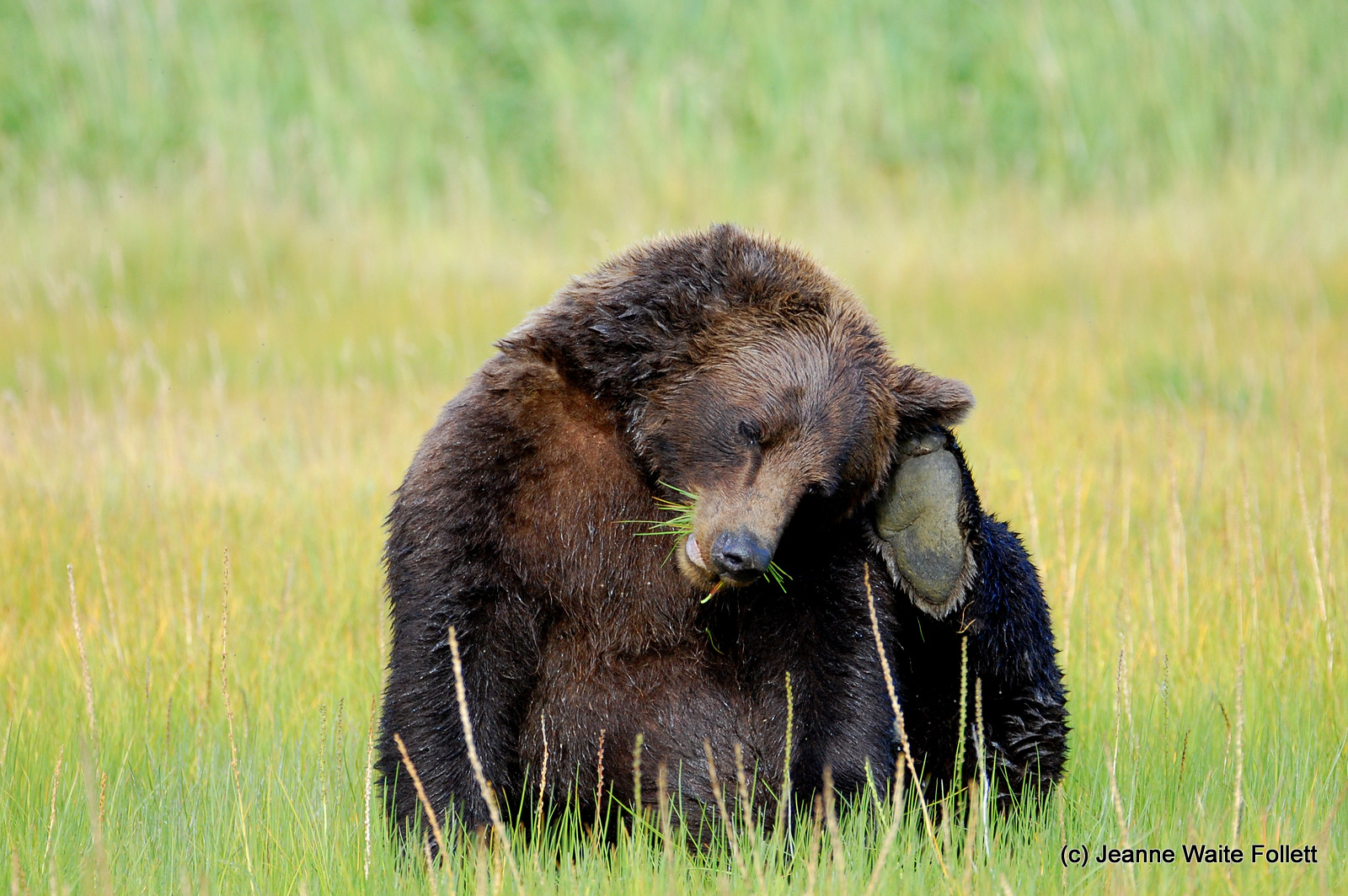 She stands and walks right towards me. 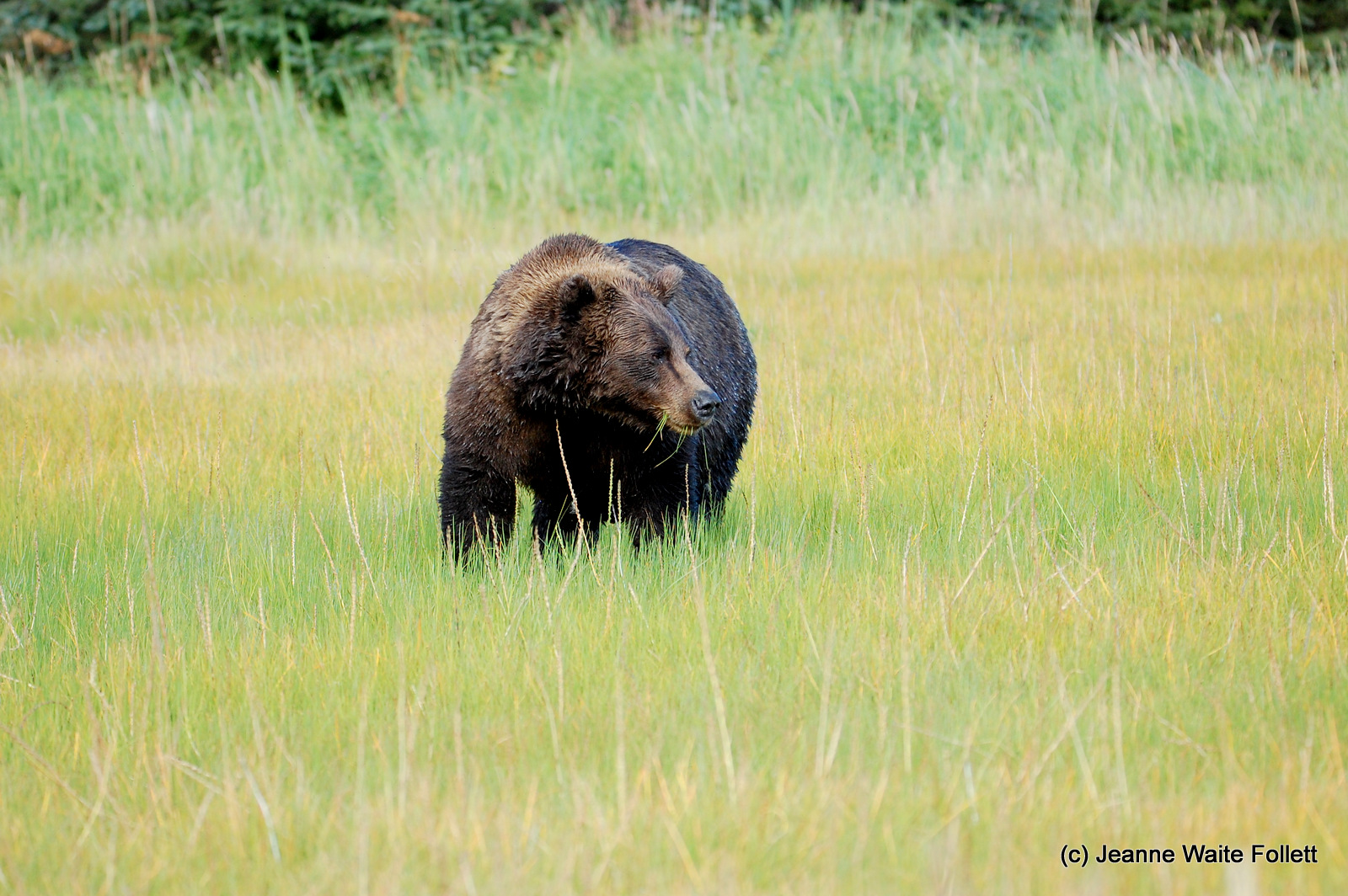 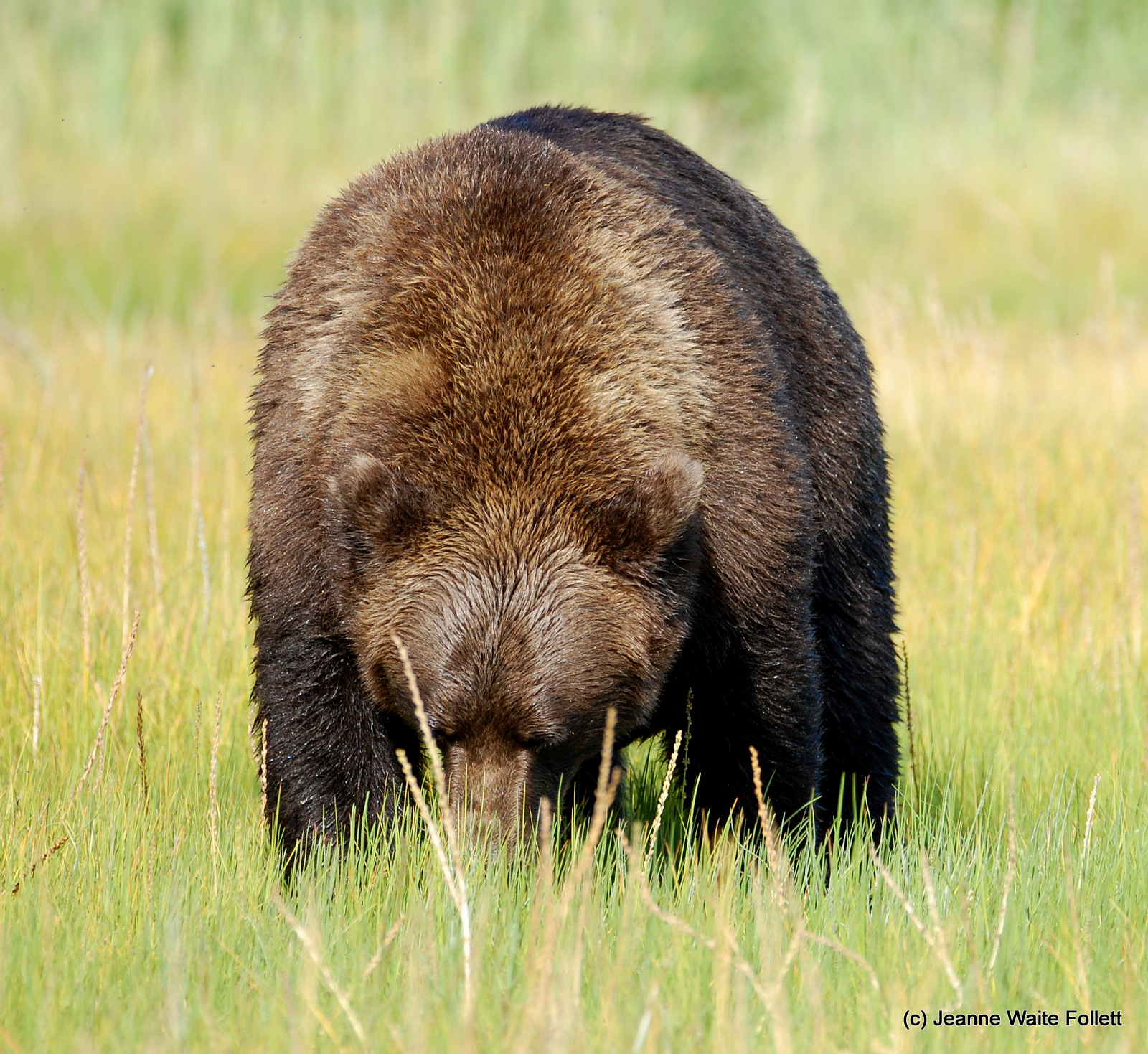 "She likes you, Jeanne." I hear from behind me.   "She's your friend."   One of the voices is Ron's.  I can't identify the other--it might have been Ron's also-- because Old Sow is right there and I'm not taking my eyes off her to look behind me. 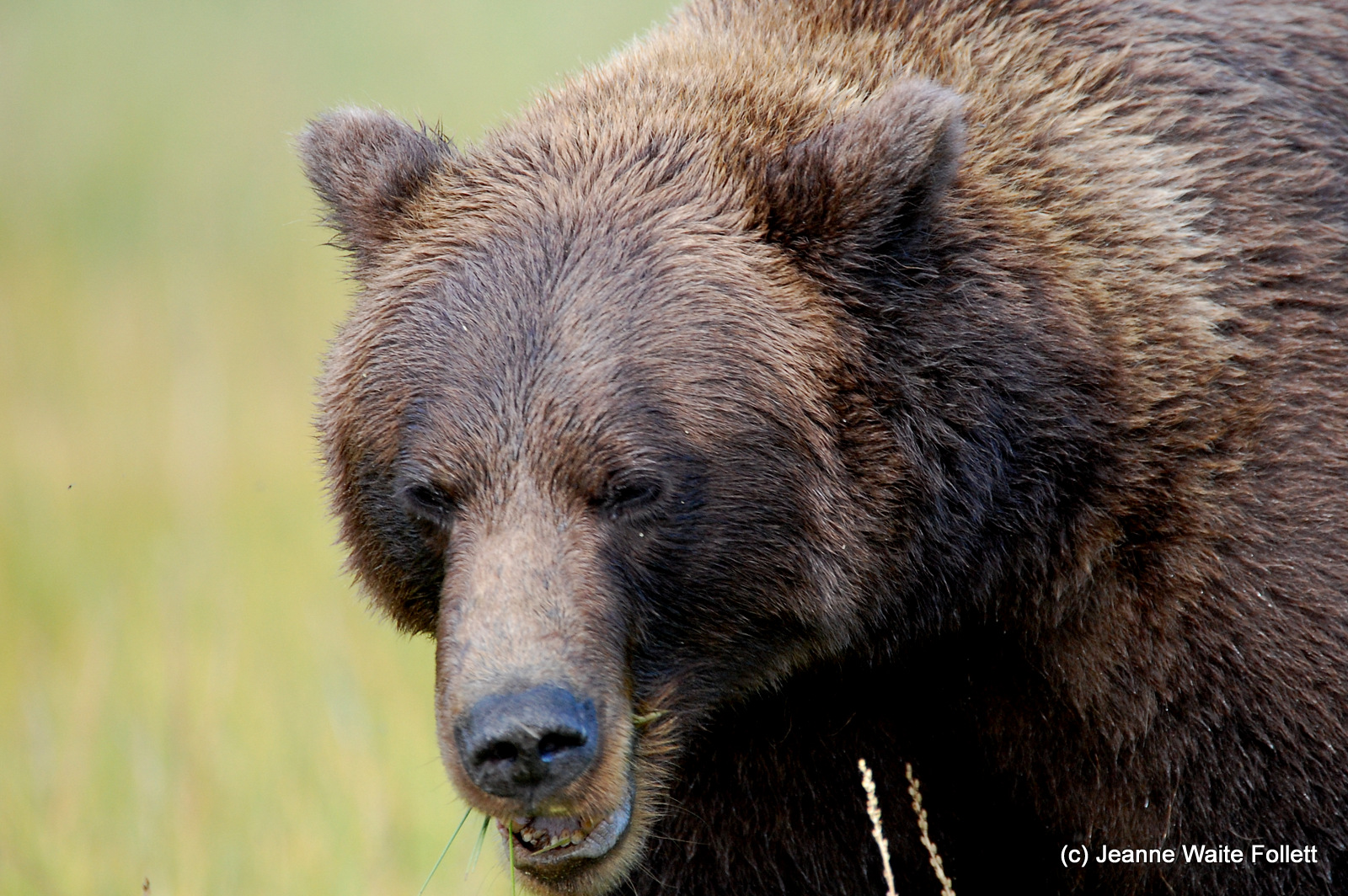 At the last moment, she veers off towards the river, giving a long line of photographers an up close look at a magnificent Coastal Brown bear, perhaps too close for their lenses. 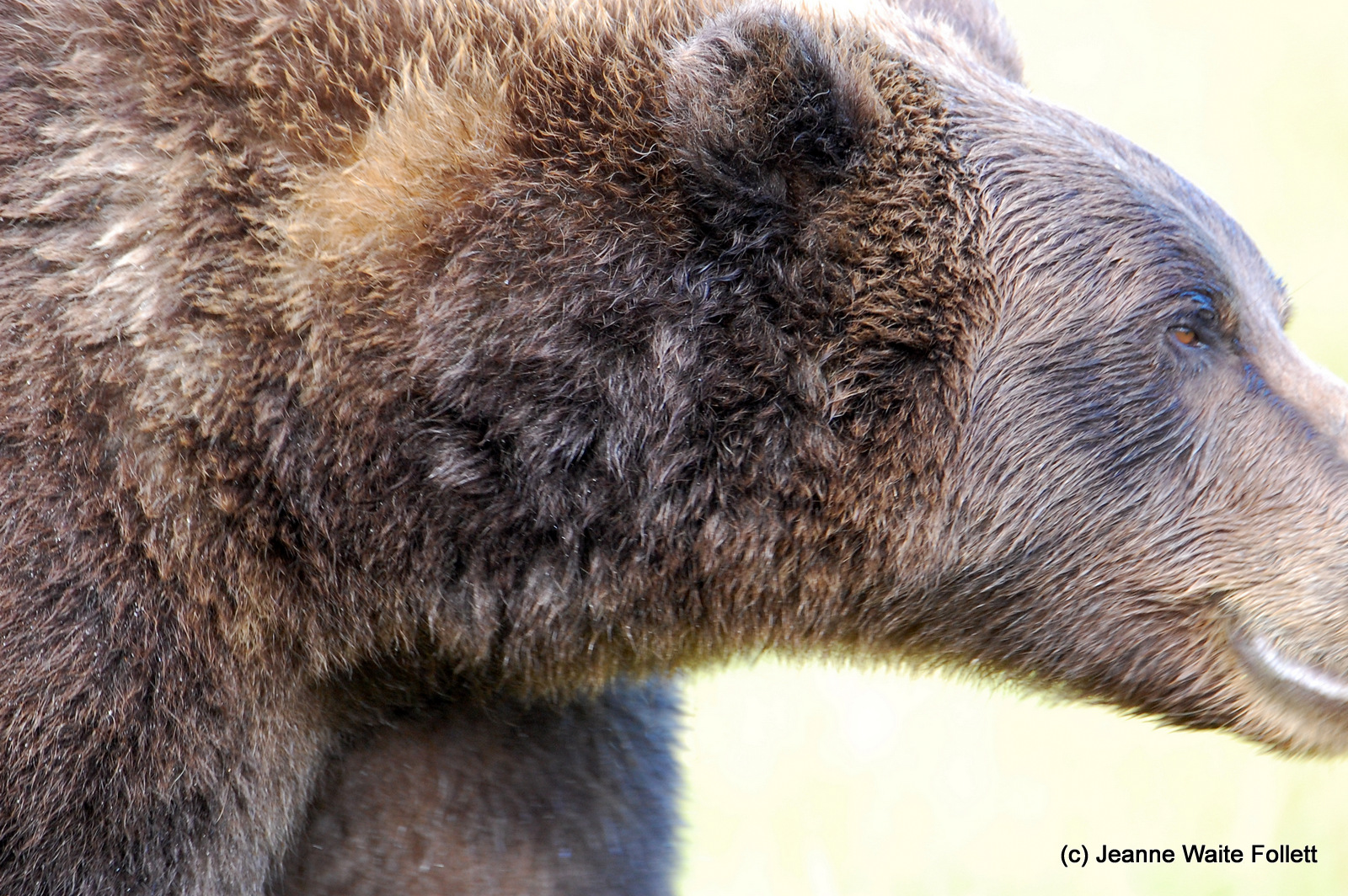 There's some more razzing from my group, which I don't recall because I am examining my reaction to being so close twice.  I am--for the situation--unnaturally calm, quite a change from two days prior when we first arrived at Silver Salmon Creek..

I think I realized it at just that moment, and I wonder if anyone had ever freaked out and screamed when a bear from Silver Salmon Creek had come so close.  It wouldn't have been pretty.