The smartest thing I did today was file a flight plan.   As for the rest of the day, I should have stayed home and acted my age, because whatever Brownie points I earned for the flight plan were far offset by all the stupid things I did today.

BUT!   Had I done that—stayed home and acted 75—I would have missed out on a very pleasant adventure.

What started it was a photo some friends posted on Facebook.   It showed the family, all decked out in winter clothing and holding hiking poles, as they were hiking on Victor Creek.   Yes, “on” is the correct preposition, as I will explain. 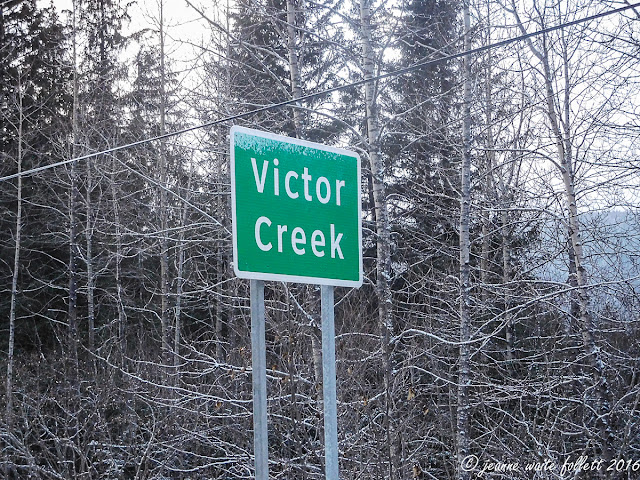 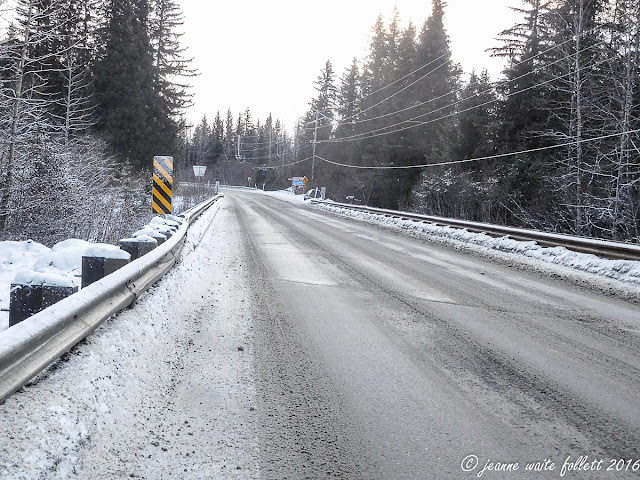 Victor Creek is the Moose Pass version of Antelope and other slot canyons in northern Arizona and southern Utah.  But those canyons don’t have creeks running through them, unless there had been recent rain on Salt Lake City or another upland place, in which case all that rain becomes torrents rushing through those slot canyons with the power of those water cannons used in hydraulic mining, and woe unto whomever is in one of those canyons because they shall perish from the earth.

Not to worry about Victor Creek.   The creek runs year-‘round.  The Forest Service has built a nice hiking trail that parallels the serpentine bed of the creek.   But that’s for summer, for hiking or fishing or even some prospecting. 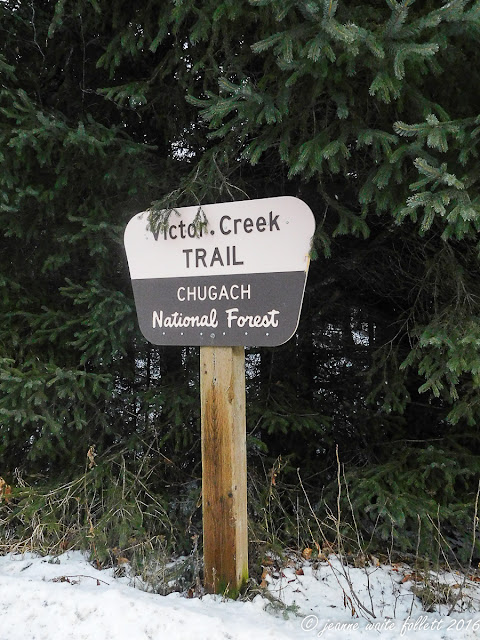 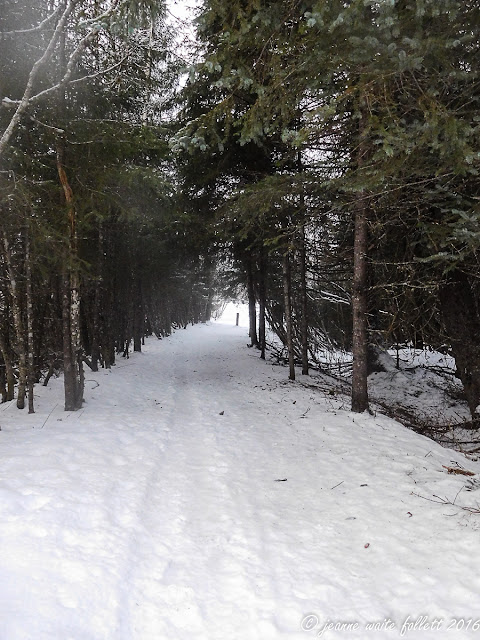 During the winter, especially after a cold spell like the one that just ended, Victor Creek itself comes into its own.   So, when I saw that photo of my hiking friends, I decided to hike up Victor Creek.   I knew almost nothing about it, except that there were supposed to be some good photo ops.

I didn’t know where to park, where to start, or much of anything else, so this would be a journey of discovery.   I donned my jeans, hiking boots, and a fleece jacket and set off down the road with only a point and shoot camera.   Three miles from home, I realized I had forgotten to take my ice cleats and hiking stick.   I also figured I might not be dressed warmly enough, though the temperature was a nice balmy 27 degrees.

So, I went home, put on a lightweight fleece shirt and a pair of North Face fleece snow pants, and hit the road.   Along the way, I thought about a friend who had tripped over his shoelaces in the Dubai airport and broke his hip recently.  It took him several days to get back to the US, and a nother few days before surgery.

I considered taking my cell phone with me, but I didn’t know where it was exactly and I also doubted there would be cell service in the creek.   No problem, because I forgot to take the cell anyway.

Instead, I stopped at a friend’s and filed my flight plan, letting her know where I was going, that I was alone, and that I’d let her know when I returned.   Then I found a spot to park near where the creek flowed under the Seward highway, looked for footprints along the creek and saw none, so I started walking up the Forest Service trail.

My hiking stick gave me fits.   It would not lock into place.  My fleece gloves have a light-weight liner and as my hands started sweating, the liner would pull out when I withdrew my hands, thus making the gloves a bother putting back on.

I found the spot where people had dropped down the bank onto the creek, and took a nice photo.  Then, thinking I could frame it better, I started to take another.   I got a “no memory” message from the camera, and I quickly realized that the extra battery and SD cards I usually carry in the truck were at home in my camera bag. 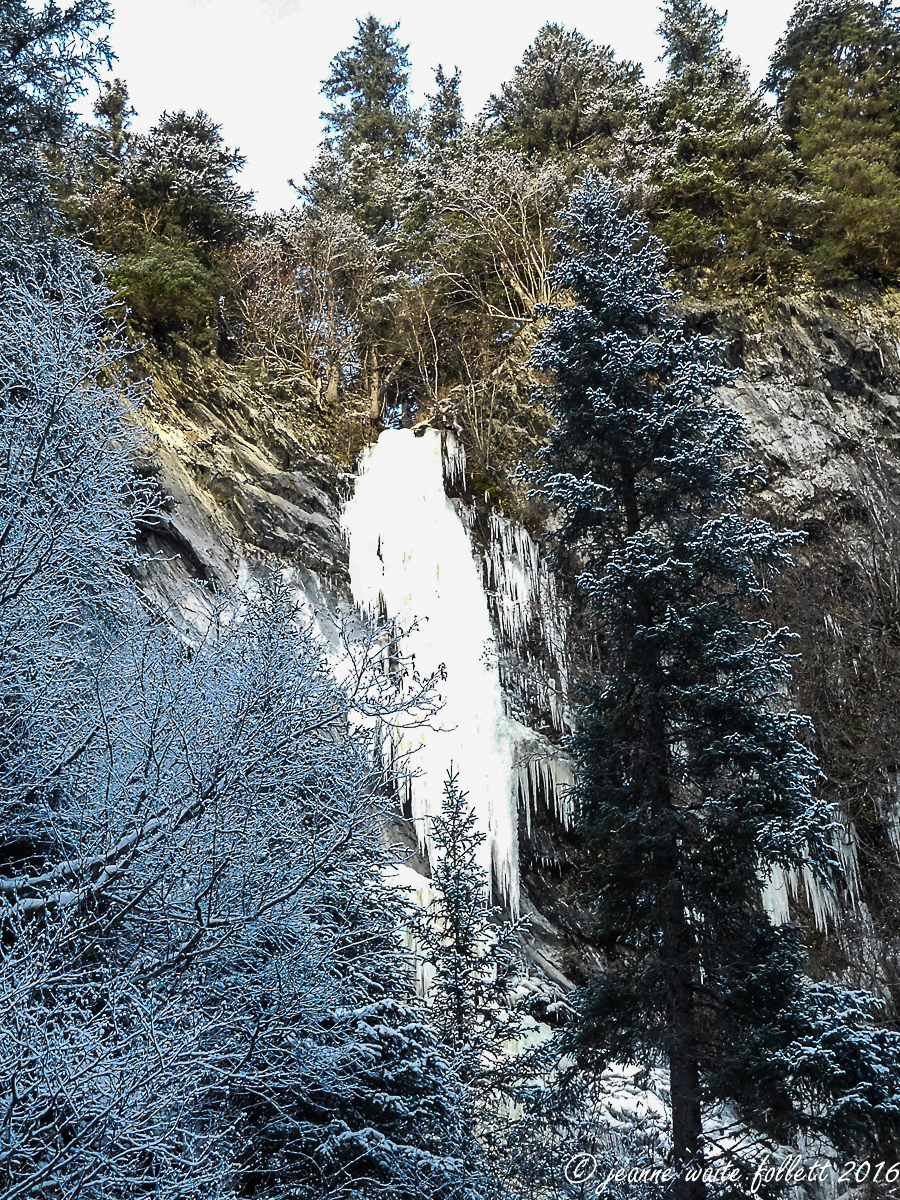 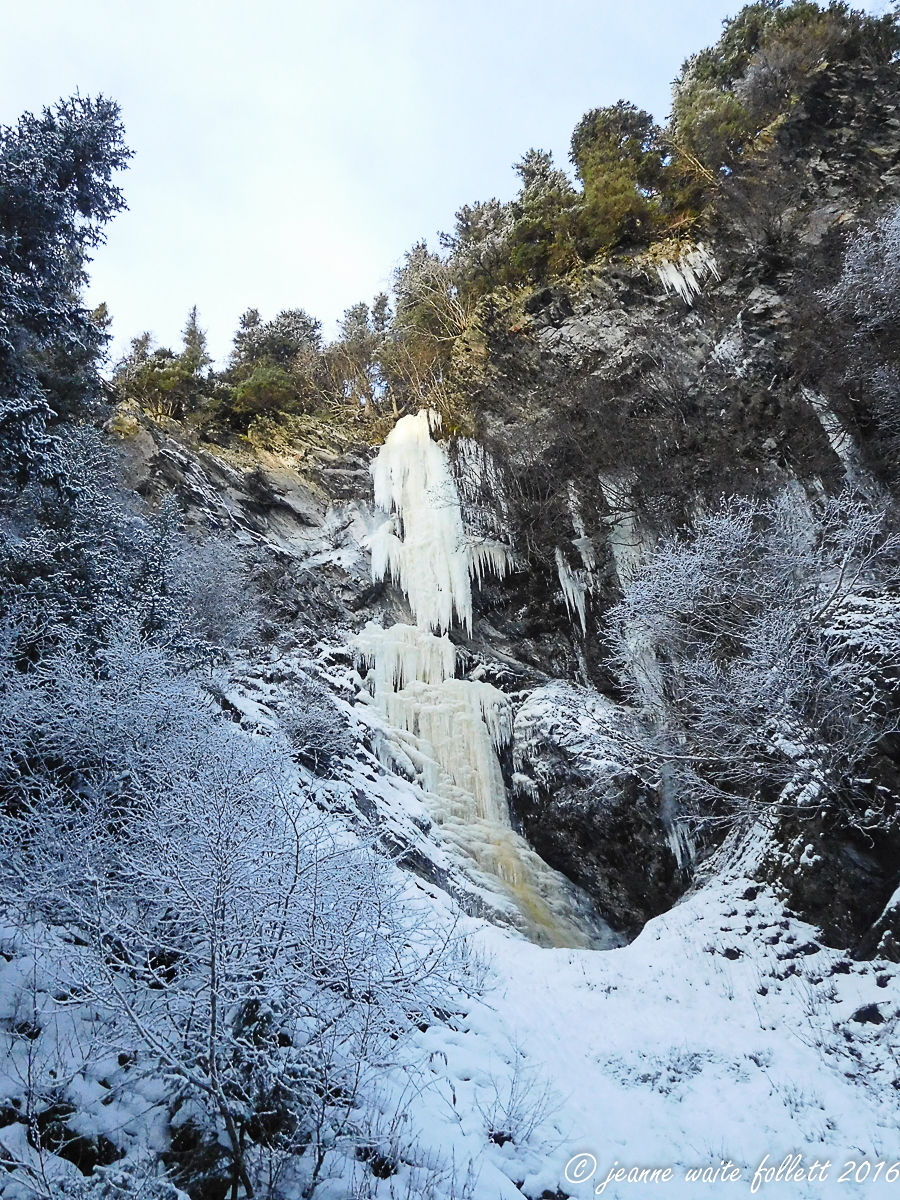 Well, I’d check this out and go back tomorrow, I thought.  And off I went, walking on ice shelves hanging over the flowing water underneath.   The farther I went upstream, the deeper the canyon became and the more fantastic the ice falls were. 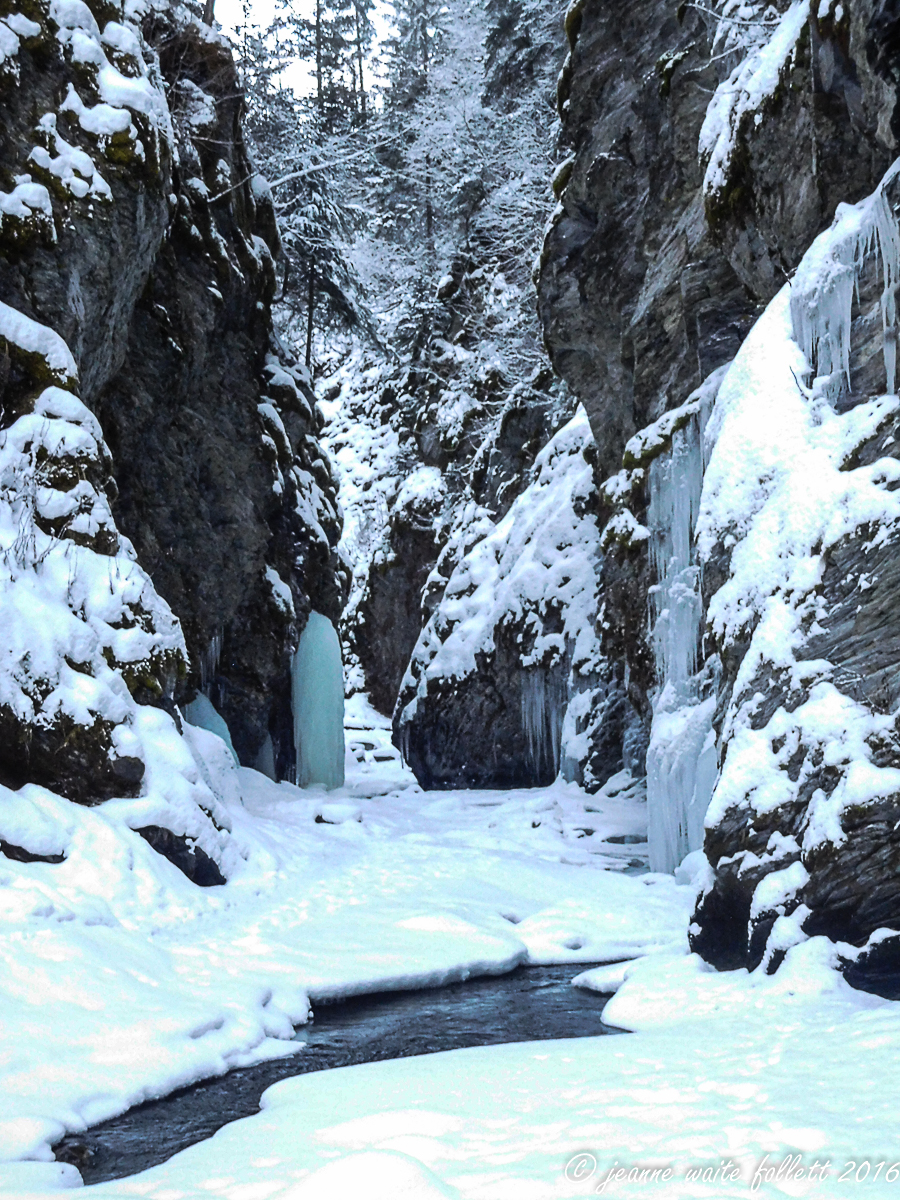 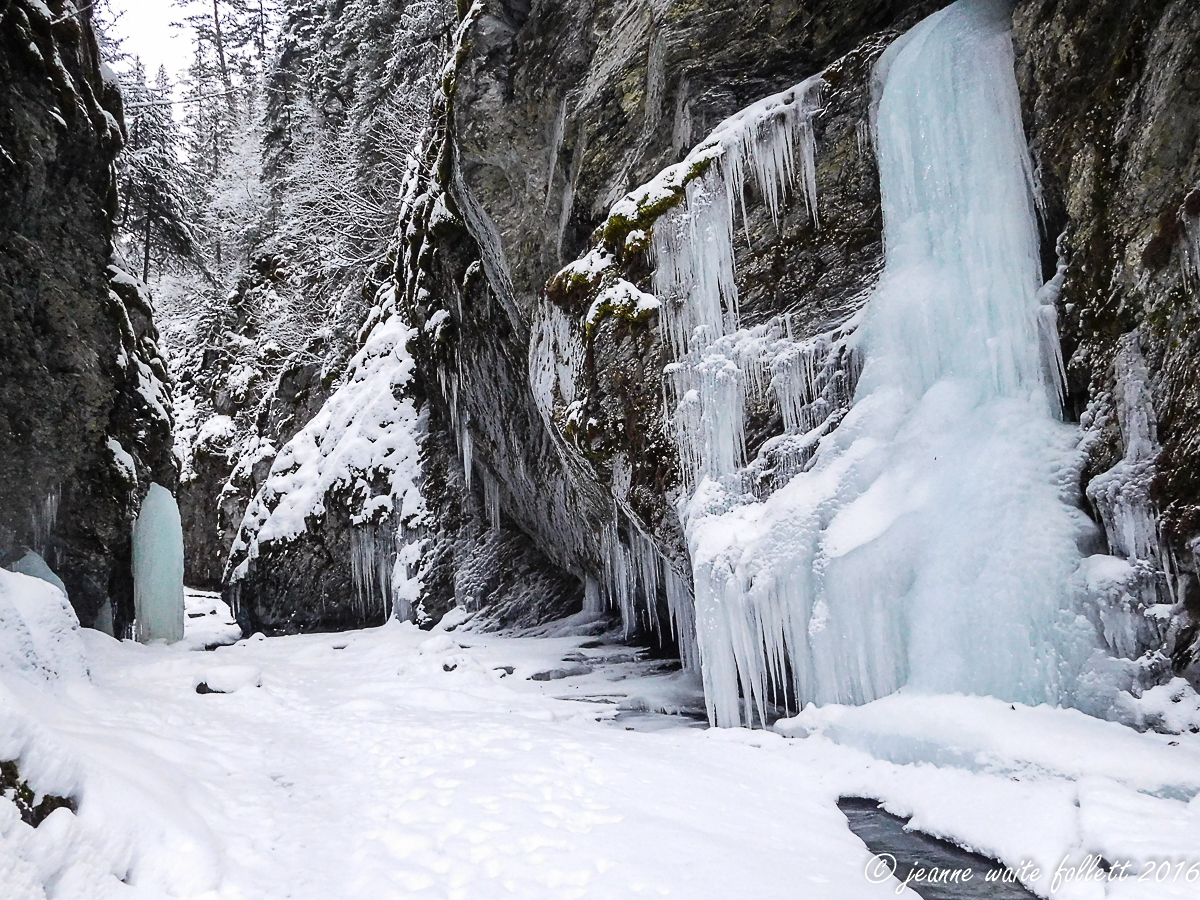 I reached a spot where those who had gone before me had longer legs than me and I knew I couldn’t step up that high (on ice), so I crossed to the other side and made my way along a narrow shelf against an ice fall. 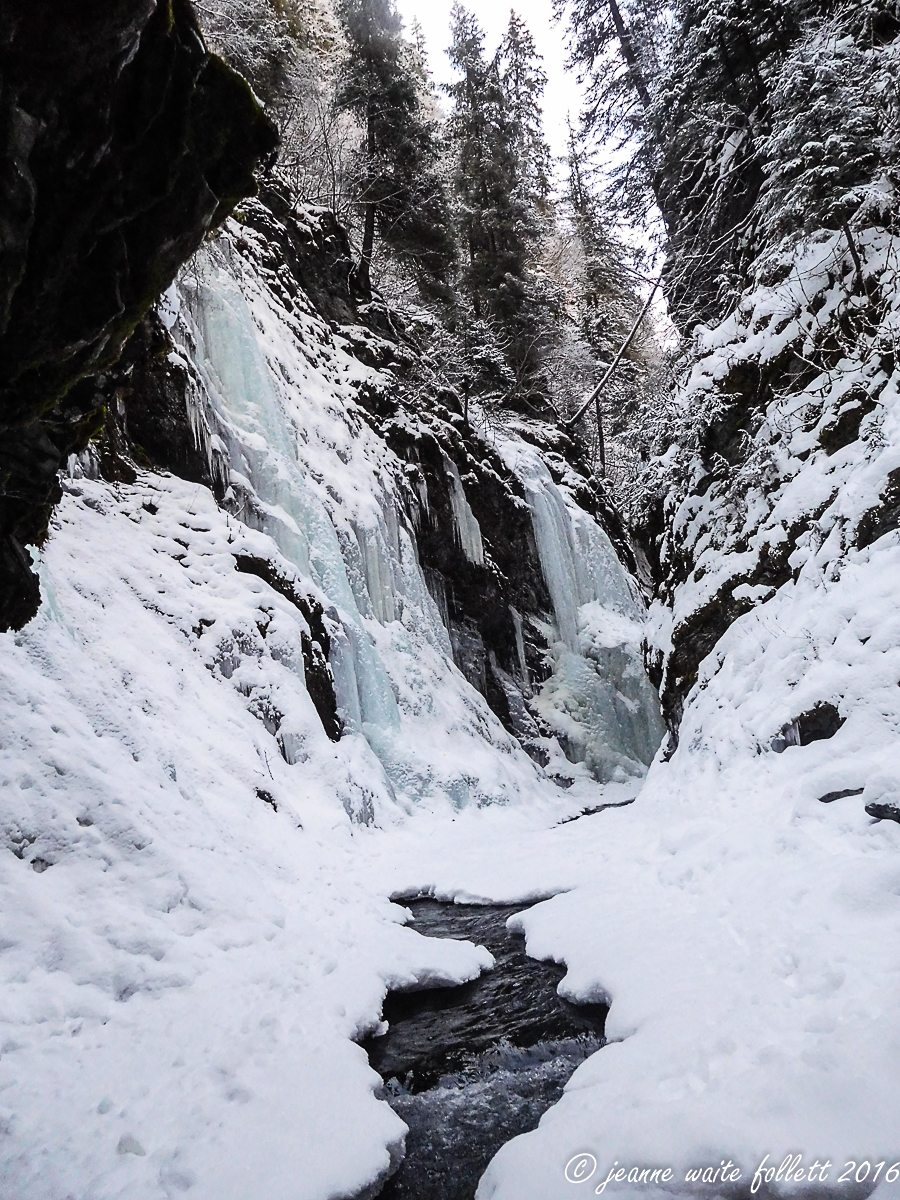 On and on I went, thoroughly enjoying myself.   I deleted a bunch of photos on the SD card and made room for new photos.  In doing this, I managed to fog up my glasses, and get my fingers cold and sweaty at the same time.   Once I got the right glove back on and the finger liners back in the fingers, I didn’t want to take the glove off again to take photos.   Note to self:   It is impossible to take a photo while wearing thick gloves. 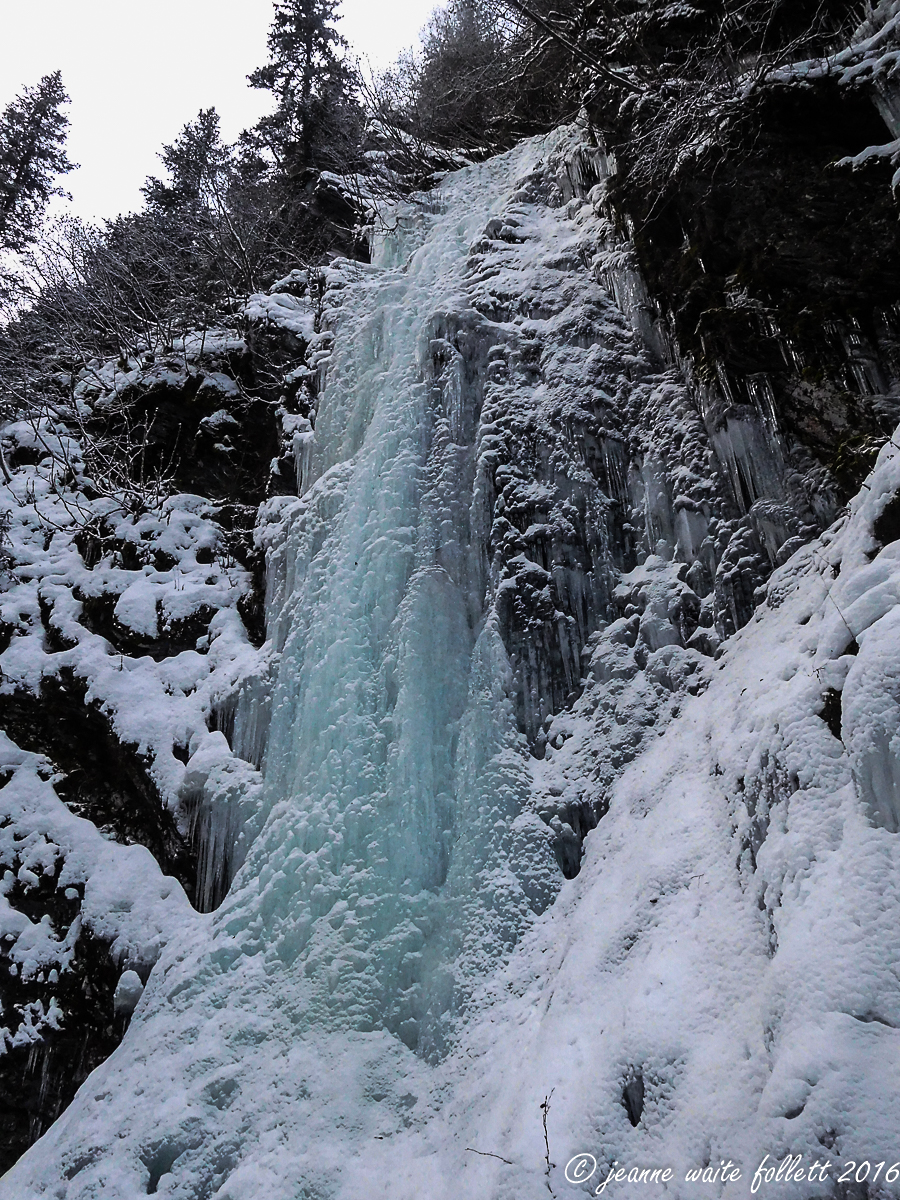 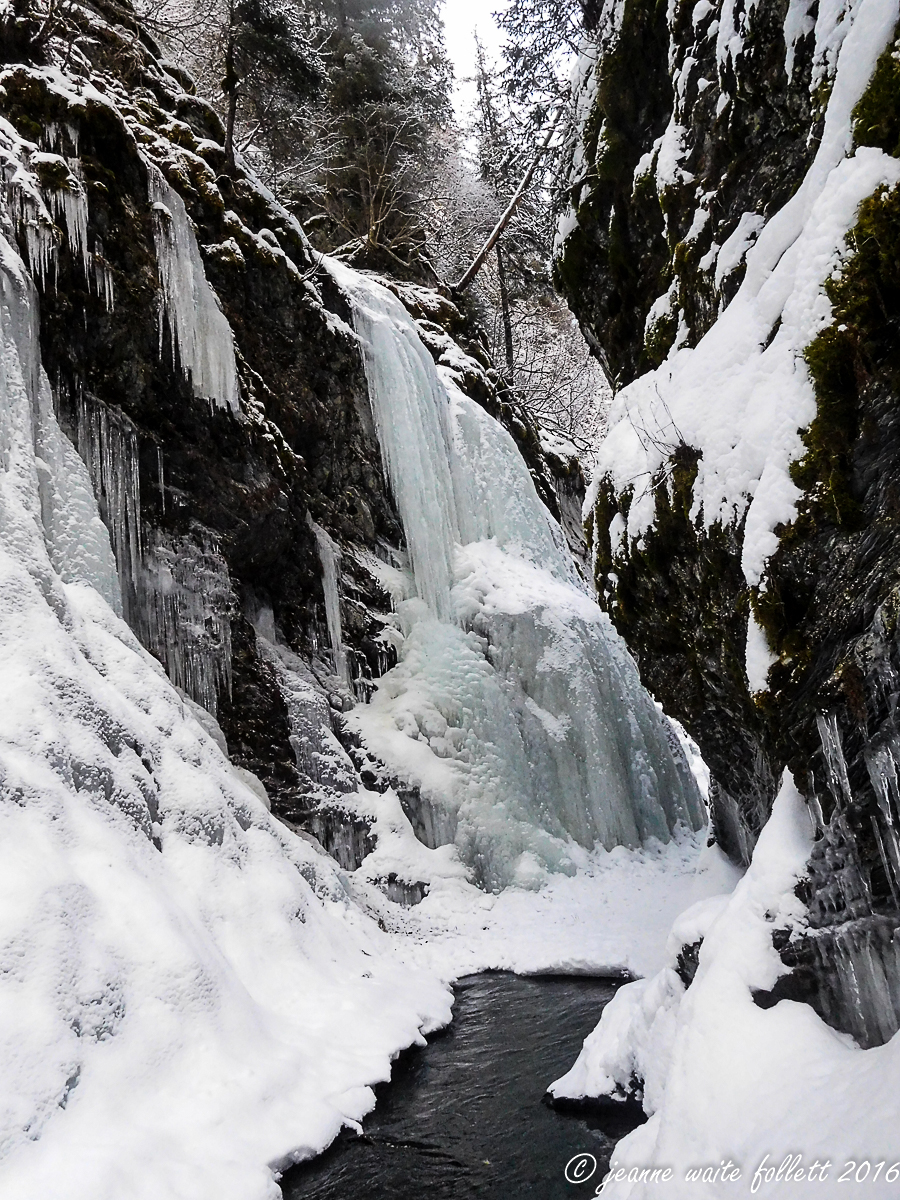 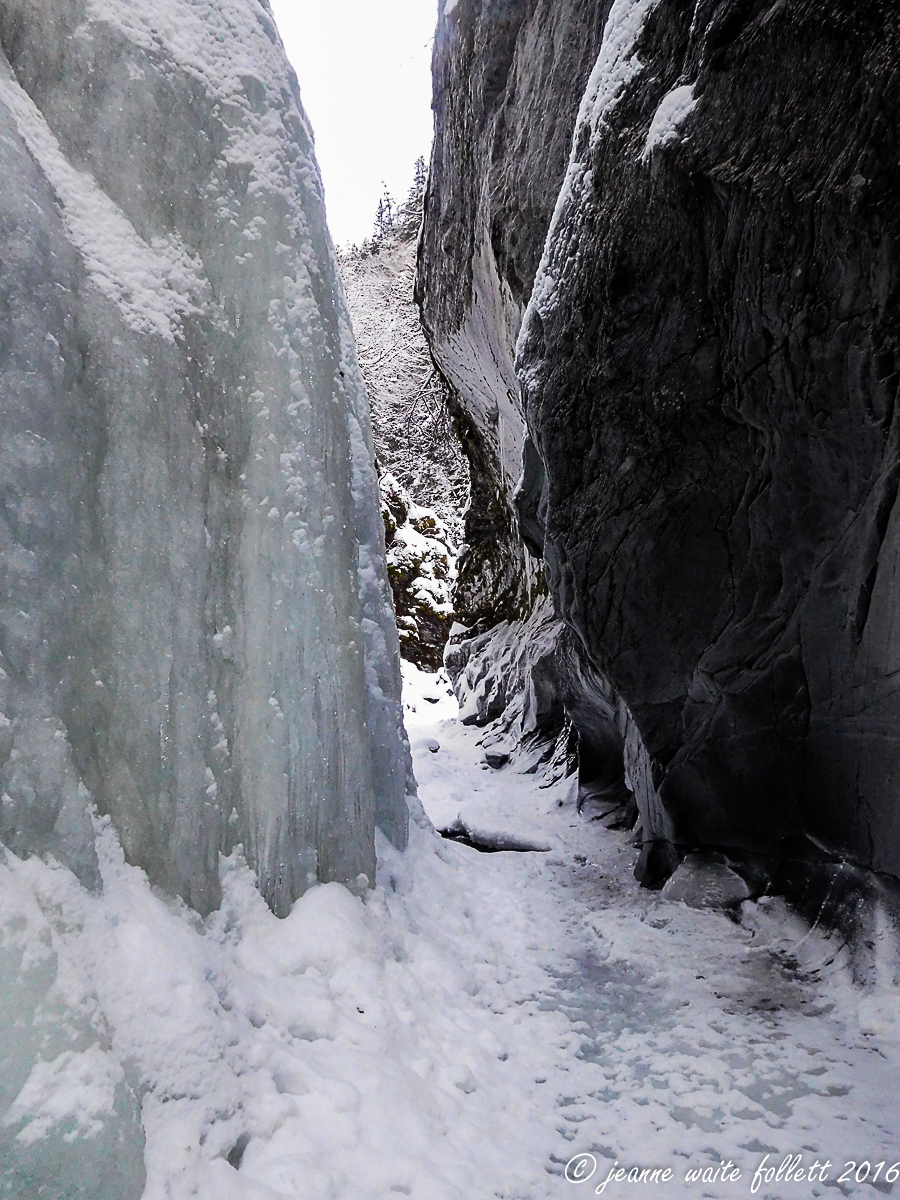 At length, I reached a large area of boulders.   Once again, the path climbed a high boulder.   I crossed the creek again and found a way through a maze of boulders where the creek thundered under the ice.  I picked my way through Volkswagen-and-Hummer-sized boulders, until I realized that the tracks I was following were canine.  Whether dog or coyote, I have no idea.

Ahead, the canyon got steeper and I couldn’t see a way through so I turned back.   And fell in.   And somewhere along the line, I tripped and fell onto my hands and knees, somehow bumping my thigh against something hard and un-giving. 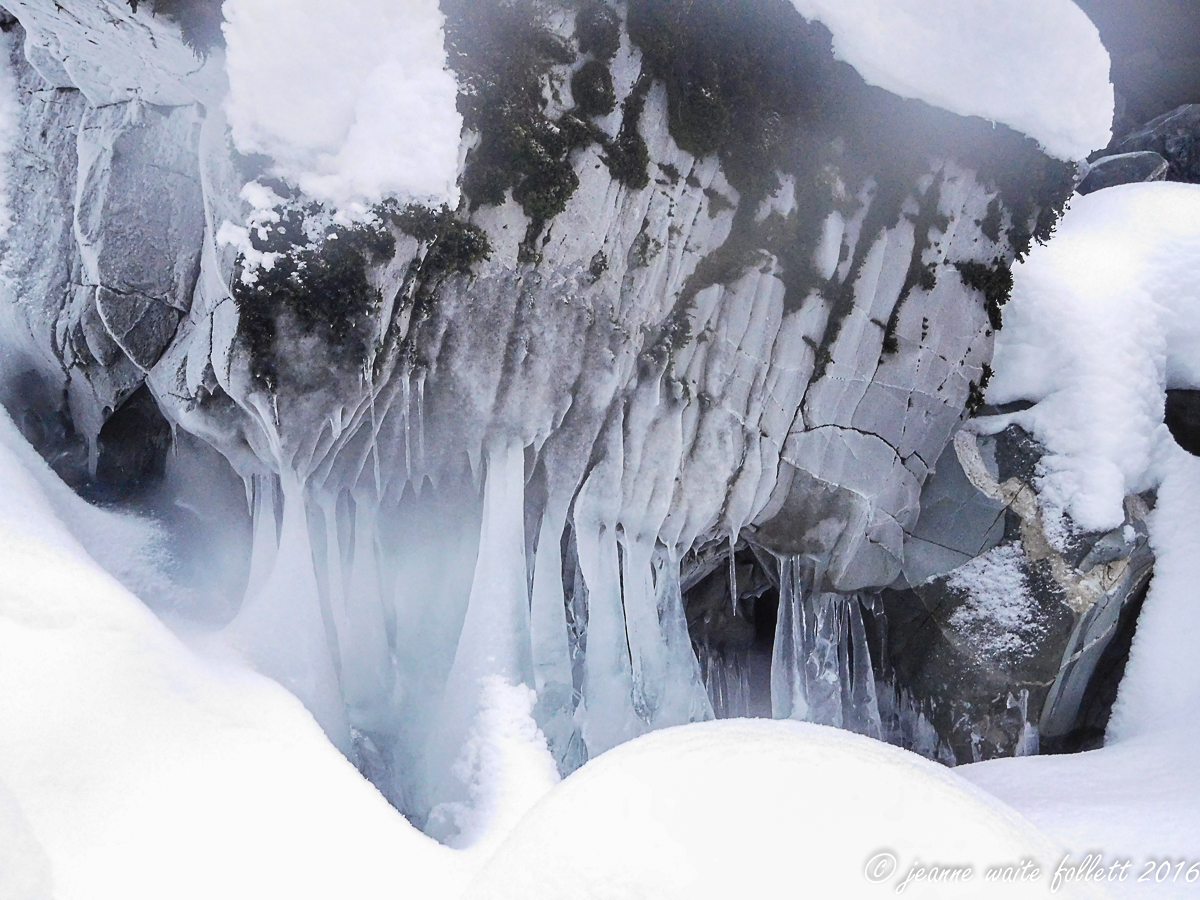 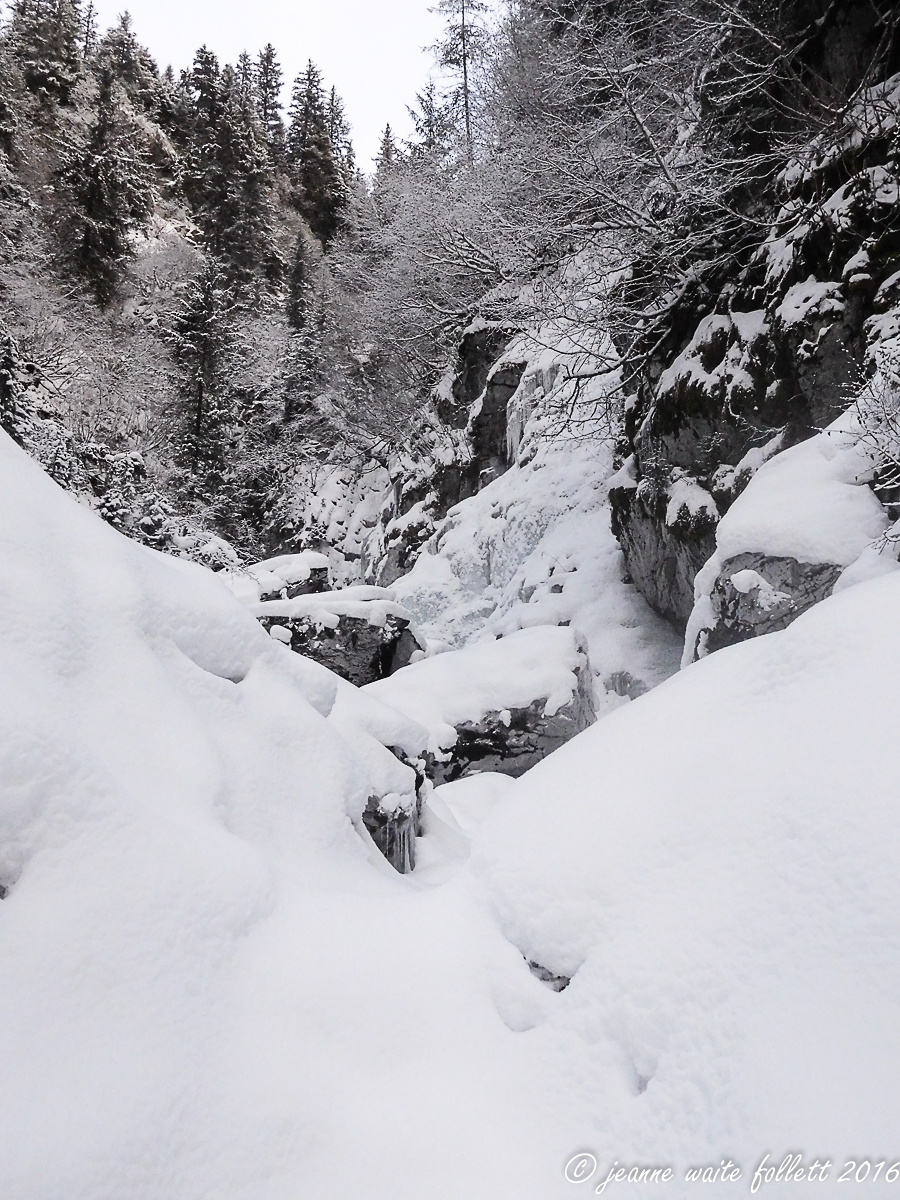 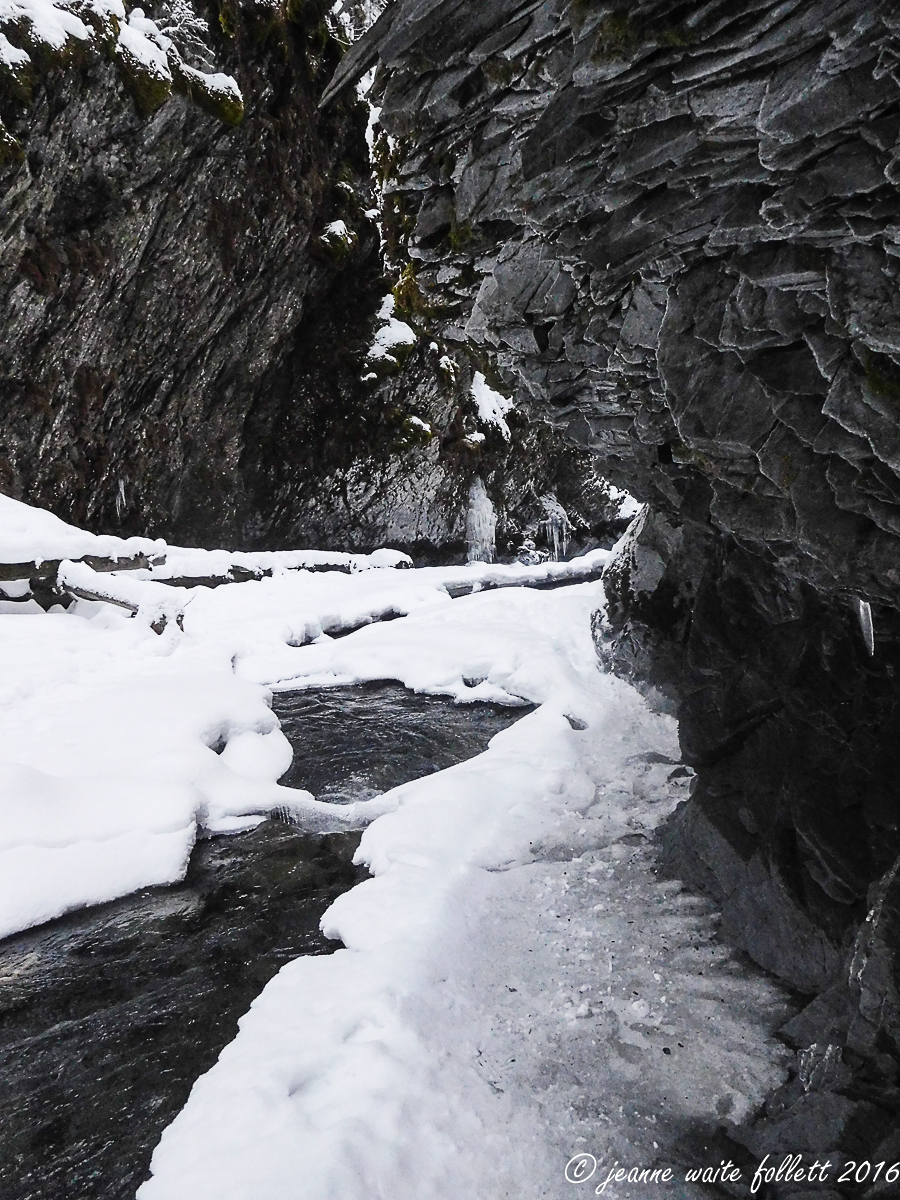 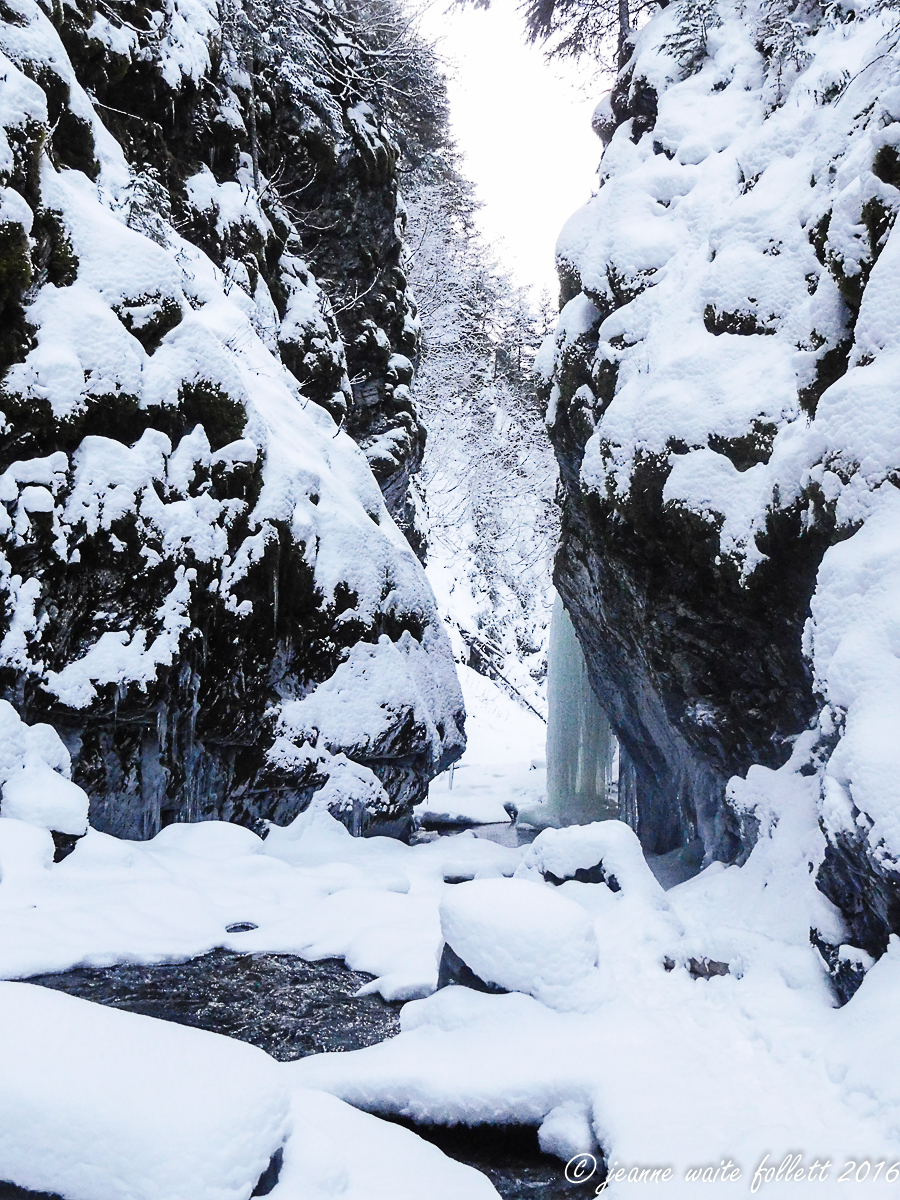 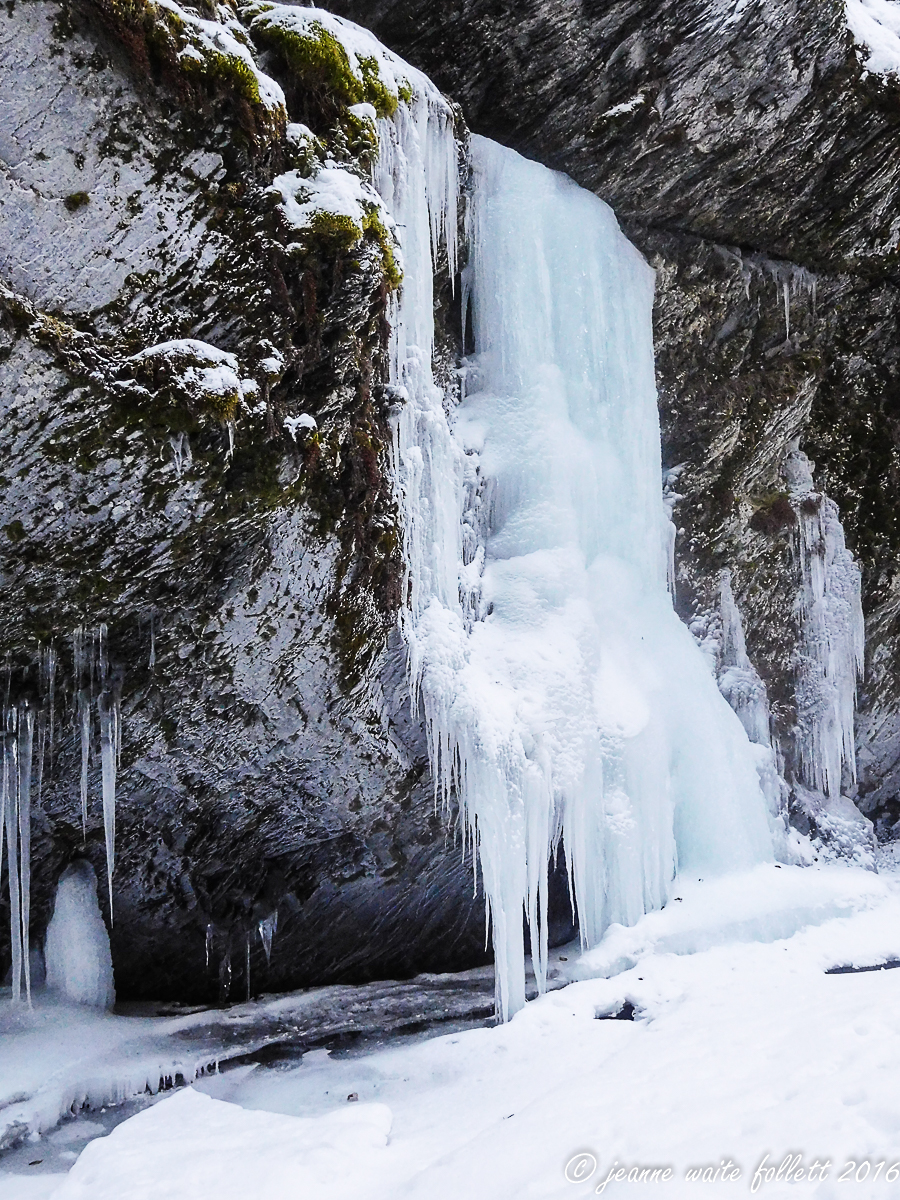 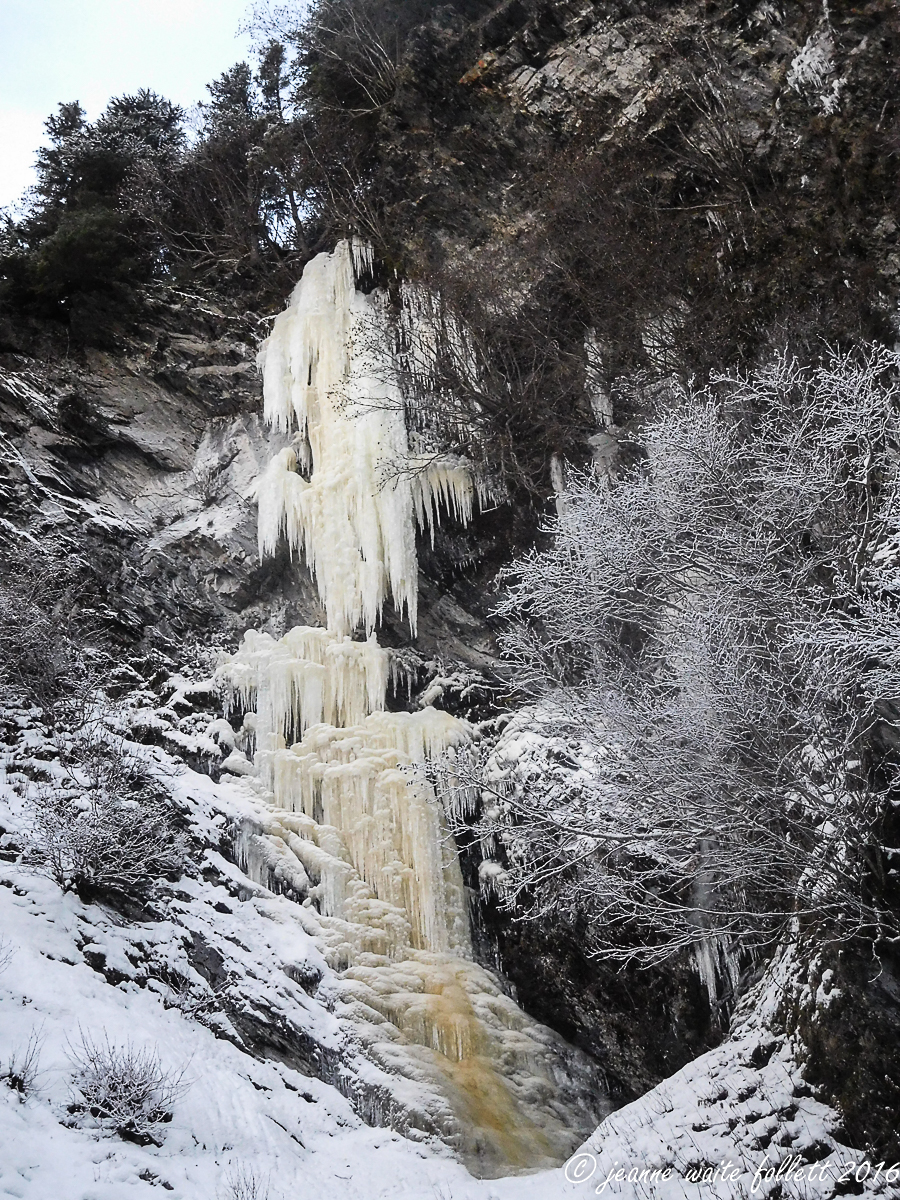 A spot I’d just traversed failed and one foot went through the ice into shin-high water.  I realized another dumb thing I’d done:  I’d worn cotton socks instead of wool which keep your feet warm even if wet.

By this time, I was very, very warm.   And sweating.   My glasses were hopeless so I put them in my pocket.   My wet foot never did get cold, so I lucked out there.

Eventually, I made it back to the trail head and drove home, where I called my friend and closed my flight pan.   That left me free to go over my photos and contemplate just how big that aching bruise on my thigh is going to get.