I’m sitting in the departure lounge of the charming Skukuza (skuw-KEW-zah) airport terminal, waiting with Marg, Holly, and Laura for the charter flight that will take us farther south in South Africa to another lodge where we will spend four nights.

We said our goodbyes to Matt and Richard, gave them hugs, and now we wait.   It’s a darned good time to reminisce about Kirkman’s Kamp, as I sip a cold Coke Zero and watch a little boy run back and forth as if he never had the freedom to run before. 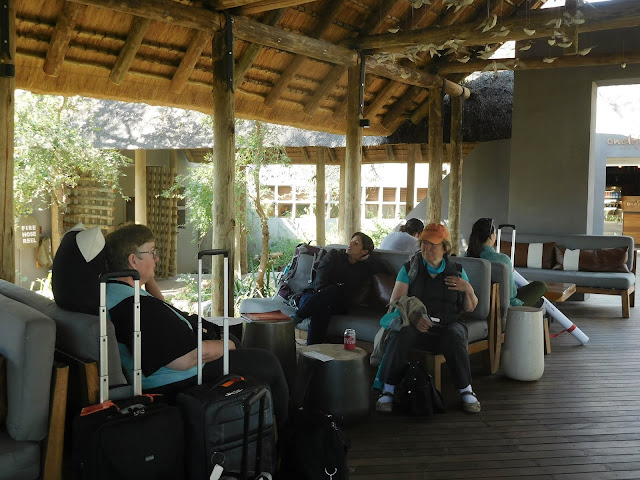 Bird mobiles fly above me as I remember the many leopard sightings in an area of Africa known for its many leopards. 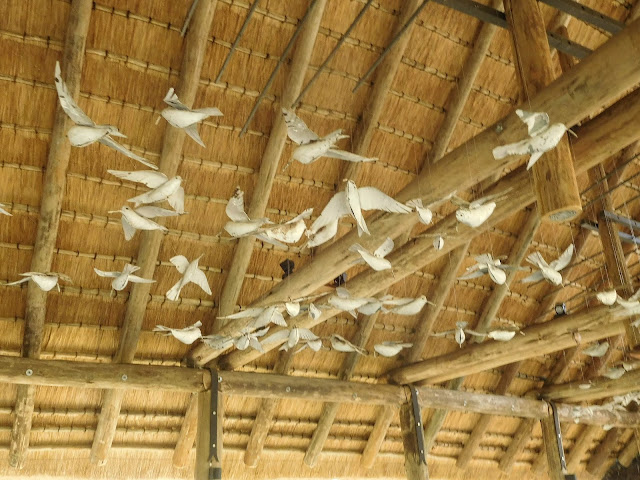 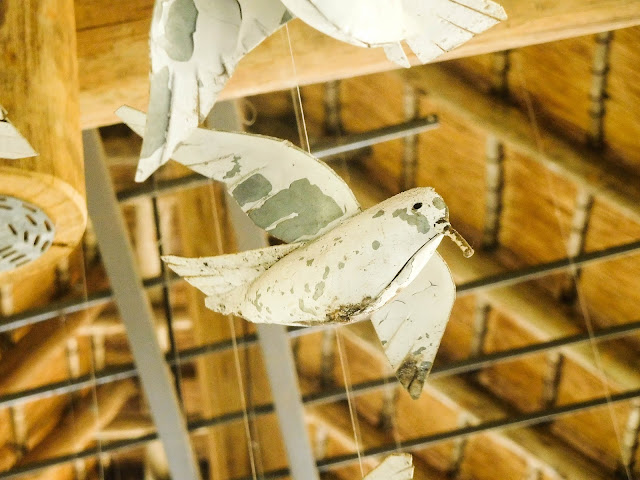 The leopards rank number one for Kirkman’s Kamp, certainly.   But a close second are the elephants, particularly the teen-aged bull that chased us into our bungalows and threw gravel at Marg as she photographed it through the open door.

Then it walked away with a saucy look. 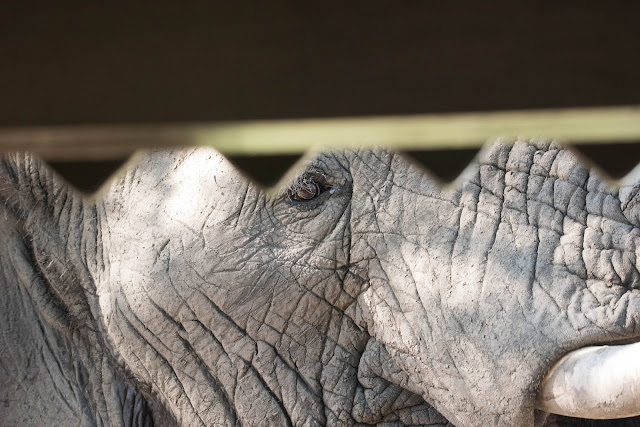 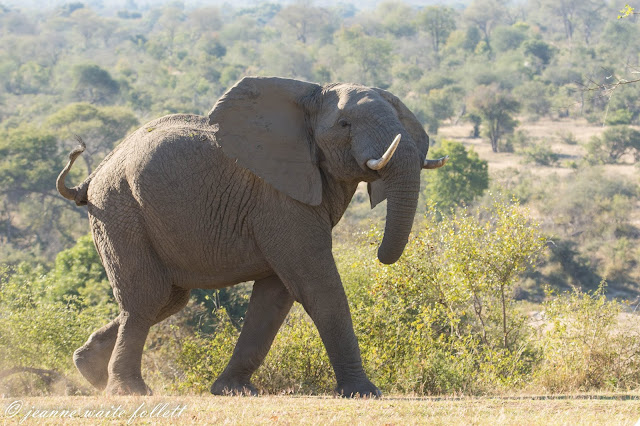 As the sun set one night, we dropped into the Sand River flood plain and inadvertently came between a very young elephant and its mother.  Our first indication of trouble was a loud trumpeting—not from the mother, but from the baby!   Trumpeting the whole distance of sixty feet or so, it ran from the reeds along the river towards us. 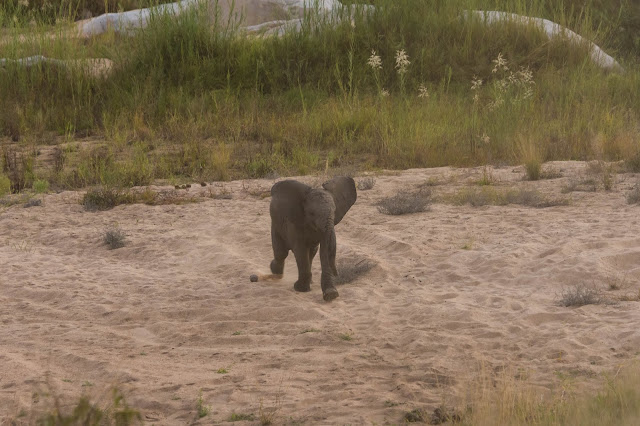 Just before it arrived, Matt moved the safari vehicle forward slowly, and the baby ellie stopped at the road and trumpeting, stomping its feet in the dust as if to say, “And don’t ever come back.” 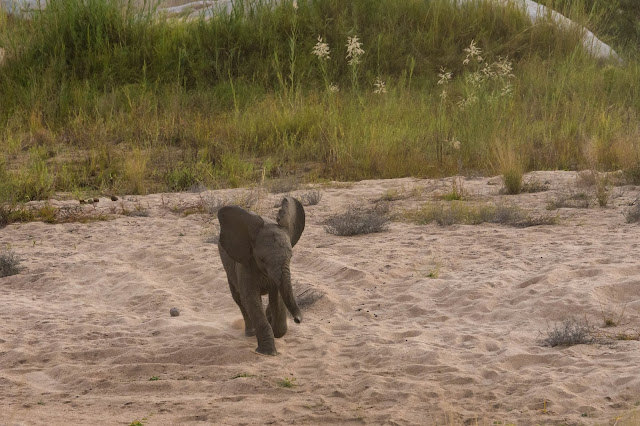 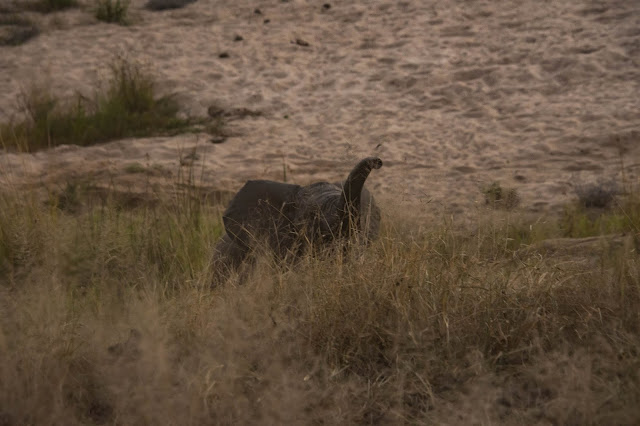 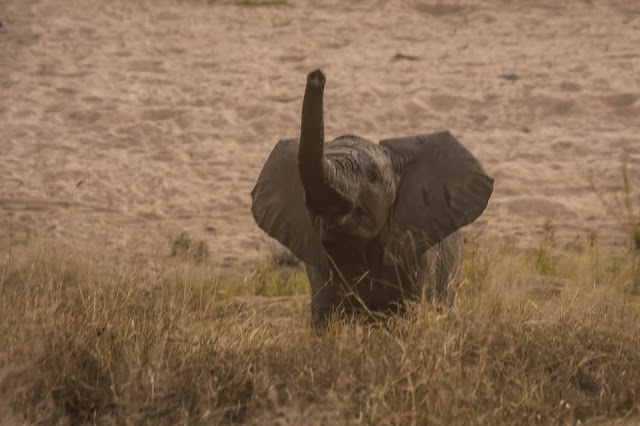 It’s so hard to keep from laughing at the baby.   We drove on and could still hear it trumpeting. 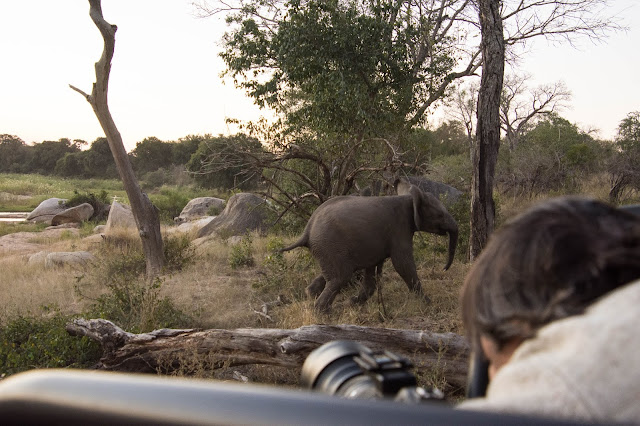 There is one incident that occurred just last night as we were in the river bottom and nearing camp.   It was pitch black when we turned to cross the Sand river and encountered another vehicle stopped just short of the bridge.

An elephant was on the bridge and not moving.   We waited.   The other vehicle turned around and went the long way back to camp.  We waited.

Eventually the big bull moved off the bridge and towards us.   Richard aimed the spotlight at its feet, which illuminated enough of the bull that I could see the insides of its hind legs were wet and also the tell-tale secretion from glands on the elephant’s temples. 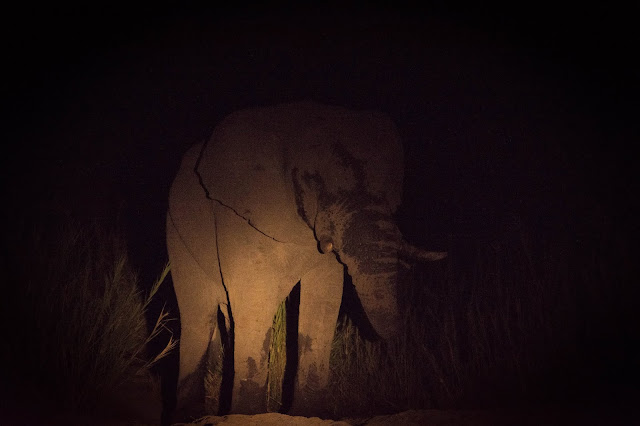 This big boy was in musth, an annual occurrence when a male’s testosterone level increases six times that of normal and reproductive hormones rise.   Bulls in musth are highly unpredictable, often showing aggressive and violent behavior towards other elephants and humans.   Some sources claim that the temple gland swells during this time, exerting pressure on the bull’s eyes, much like a horrific toothache, and this is what drives the bull’s violent behavior. 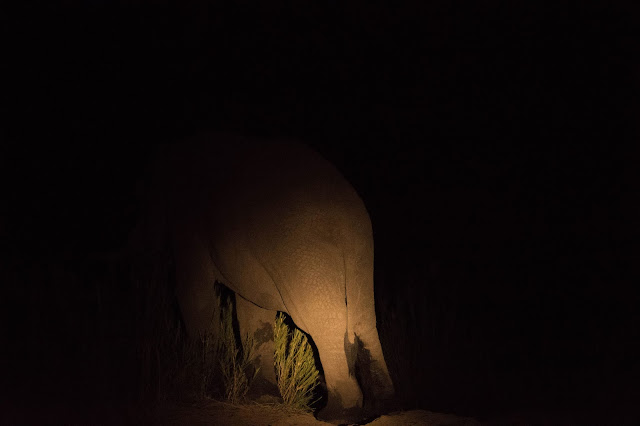 I was all for turning around and going the long way back to camp.

Instead, we sat and waited in the dark.   Once in a while, Richard turned the spotlight on the ground in front of the ellie.   I’m certain Richard knew where the animal was at every second, but I didn’t and I wanted to make sure it wasn’t moving closer to us.

After 40 minutes of waiting, the elephant moved far enough away from the access to the crossing for us to proceed.

I will admit, it was a tense few moments as we passed the bull that was now unseen but nearby.   As we moved past, we encountered the reek of a bull in musth, the combination of the gland secretions and urine dribbling down the bull’s legs.   It was a powerful stench.

This event I will take away from Kirkman’s Kamp and will tell many others in the future about waiting in the dark for an unpredictable, potentially violent, giant to move.

The story will come to mind, but the image that is indelible occurred when Richard aimed the spotlight high over the bull’s head.