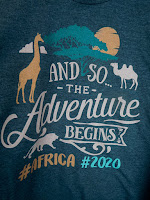 The first time we drove from Pangolin lodge to the river where the photo safari boats are moored, I saw some warthogs alongside the road.   That wasn’t surprising because warthogs are often seen around hotels and in towns in Africa.

On another trip to the river, a small herd of impalas were grazing on the shoulder.   Again, not unbelievable but perhaps not common, either.  There are signs on one side of this road denoting the boundary of the Chobe National Park, which is generally unfenced.

Along this main road in the town of Kasane, however, there is a rudimentary wire fence along one side of the road.  Apparently, it doesn’t stop warthogs or impala.

I wondered if elephants ever wandered into town and if people looked around their area before venturing out of doors.

I got my answer on the drive back to the lodge.   We had just turned onto this road where, incidentally, workers had been cutting back grass and bushes earlier that day, when I saw a sub-adult elephant confronting the car ahead of us. 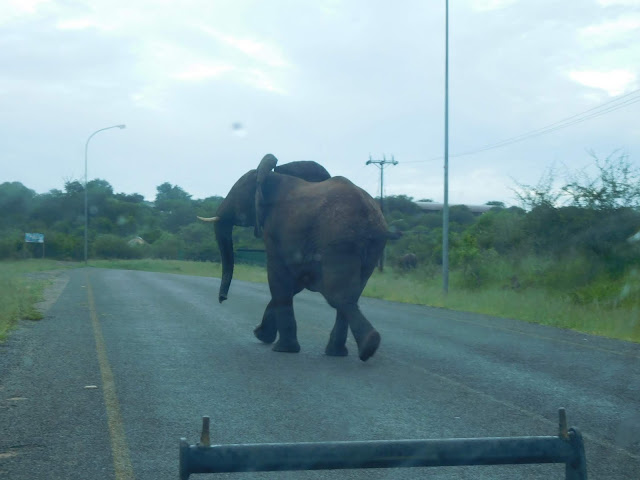 Ears flared, trunk in the air, there was no doubt the ellie was upset.  That car made it around the animal safely, and then it was our turn.

We made it safely, too.   Perhaps it was the knowledge and skill of our driver; perhaps the ellie wasn’t really intent on destroying us.   Teenaged bull elephants are known for these fake charges.   But even teenaged sub-adult ellies are huge and capable of inflicting great damage.

Alongside the road, however, were several more elephants.  They were outside the park and who knows where they were going?   Would they be content with ripping up bushes and stuffing them into their mouths? 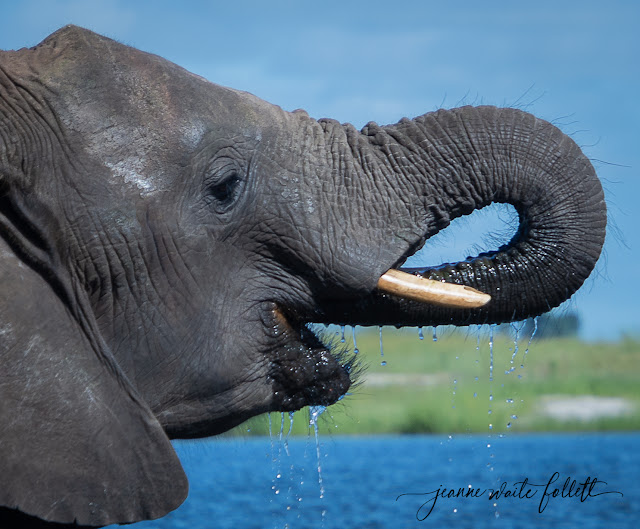 Botswana has a lot of elephants, probably a third of all the ellies on the African continent.   Their population has grown to about 130,000 after a ban on hunting went into effect in 2014.   Additionally, rangers were given authority to shoot to kill if they encountered poachers.  These are the Kalahari elephants, the largest of all elephants. 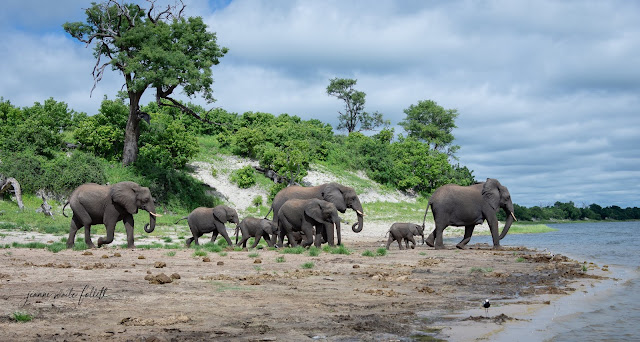 I recently read an article about a man trying to build a guest house in Kasane along the Chobe River.  An elephant came through and did some serious damage to it.   Native farmers, usually dirt poor, bemoan the loss of their crops to elephant marauding.   And then there are the people killed by elephants, a not uncommon occurrence. 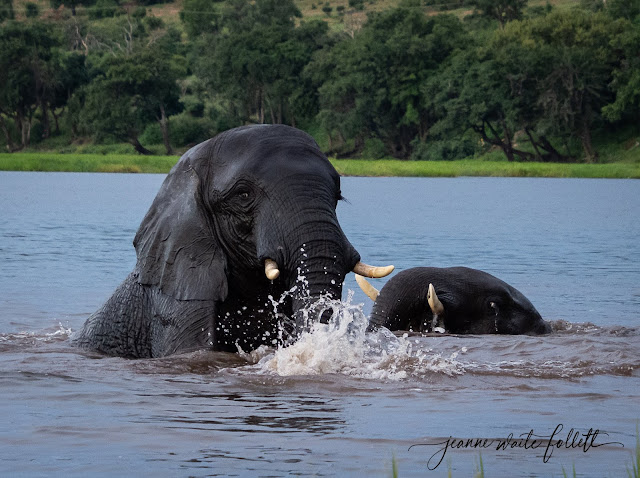 Last year, after a presidential election, the hunting ban was lifted, resulting in a worldwide outcry.  This February permits were sold that allowed the taking of 60 elephants.

The natives are happy that the government is responding to their concerns.  The lodge and safari trip owners are not.   Tourism is the second most profitable industry (after diamond mining) in the country and it employs far more people than hunting does.   Would tourists start staying away in protest to trophy hunting? 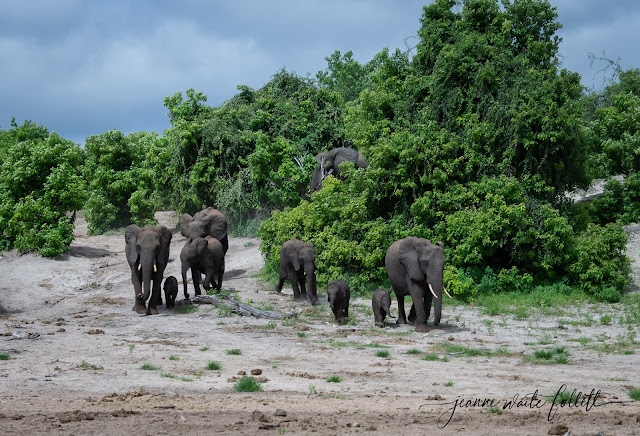 Marg and I had discussed a trip to Botswana and the Chobe River for a couple years, well before the lifting of the hunting ban.  Each of us was disappointed to hear that elephants would now be culled.

I understand, I think, the great concerns of the native population and the dangers of the huge animals.   One elephant can destroy a farmer’s entire crop in one night. 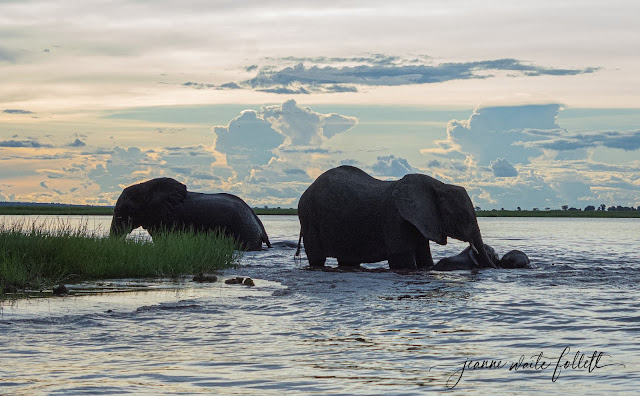 I also understand the world-wide condemnation of trophy hunting and I am aware that many elephants are poached for their ivory tusks every day. 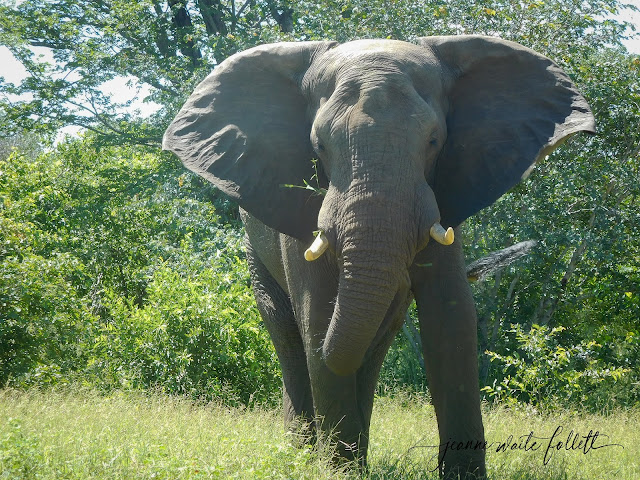 What I really don’t understand was brought home to me one day while we were floating down the Chobe River.   Several elephants were on the bank ahead of us, drinking from the river.    As we approached, most of the animals went back into the forest.   Only one remained in the river, looking onshore as if expecting something. 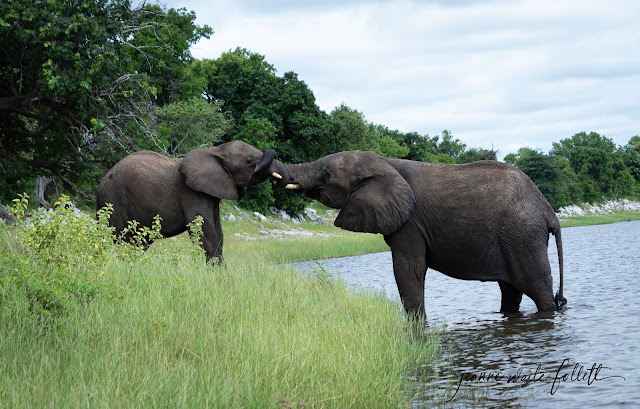 That something was another elephant that emerged from the vegetation and walked right up to the first ellie.  Then, in a gentle ballet that grabbed my heartstrings, the two wrapped their trunks in greeting and the exchange of emotions was as plain as could be. 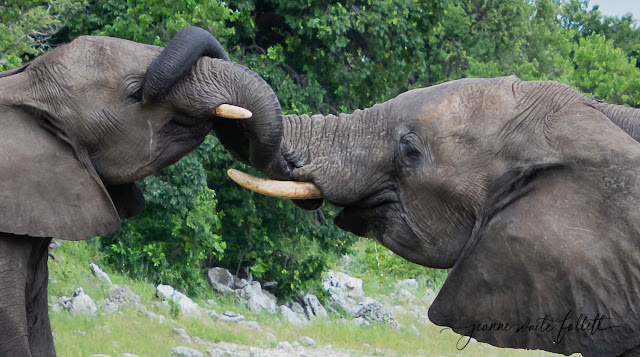 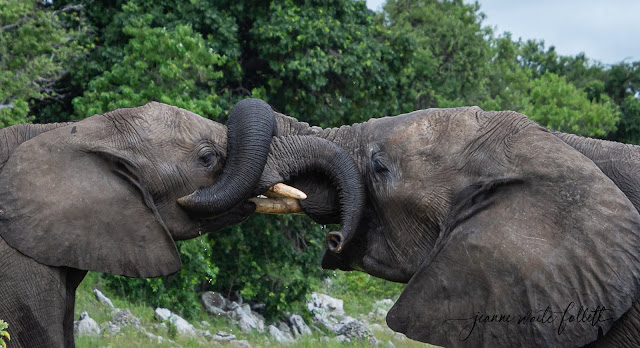 How, I wondered, could anyone kill one of these beautiful animals for sport? 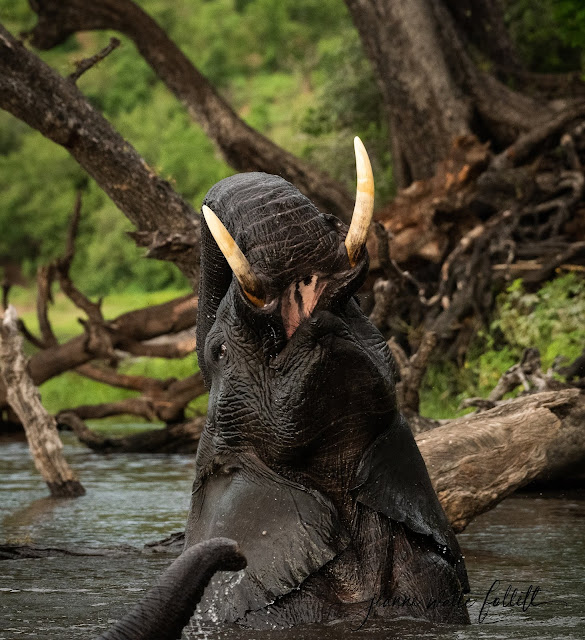