Chapter 21
Bouncing and Sloshing across the Mara


NOTE:   The photos will look best if you open them by clicking on one.   A film strip will appear at the bottom and you can scroll through them by opening each one.   I suggest you read the story then go back and click on the first photo. 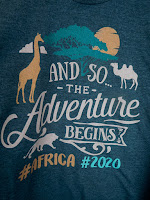 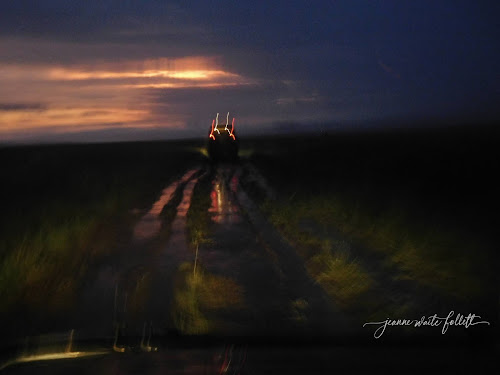 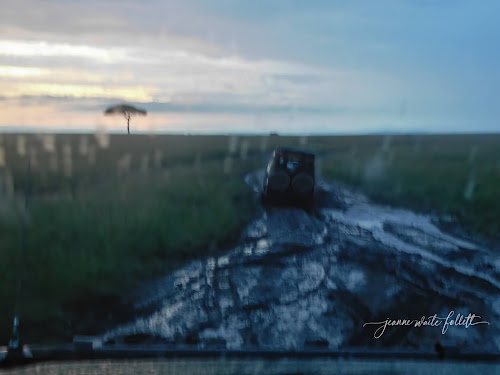 The guides take us to a pair of sleeping young lions.   As we watch, the sun peeks over the horizon and bathes one of the males in golden light.  The lions are sleeping on the dirt trails for two reasons:   a) the dirt retains heat and warms up faster, and b) it’s dryer than the grass. 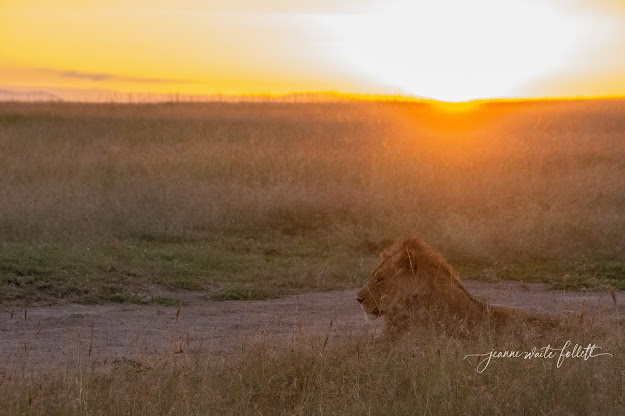 One of the males calls for his brother.  Forget MGM.   This is how lions really sound.

We stay with the lions for a while, watching as they rise and move into a copse of bushes. 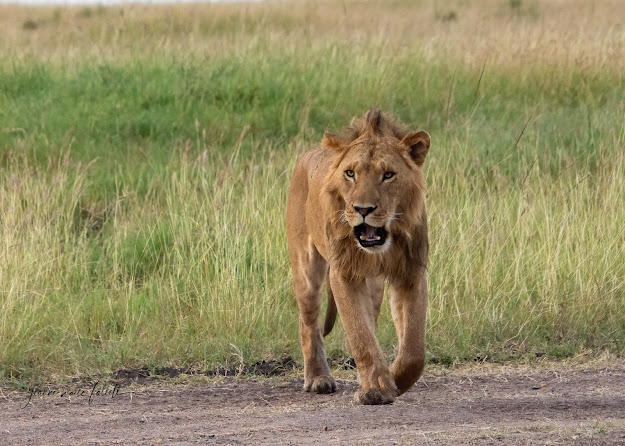 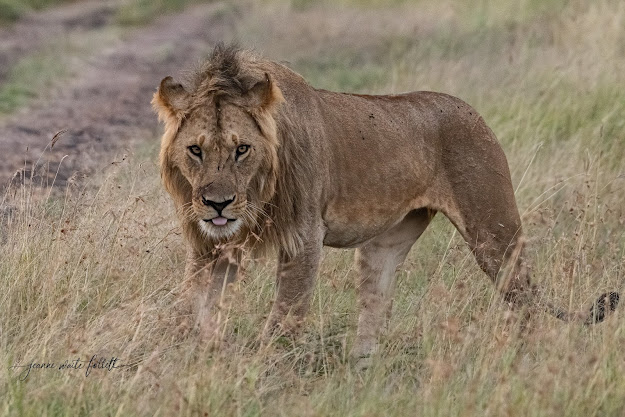 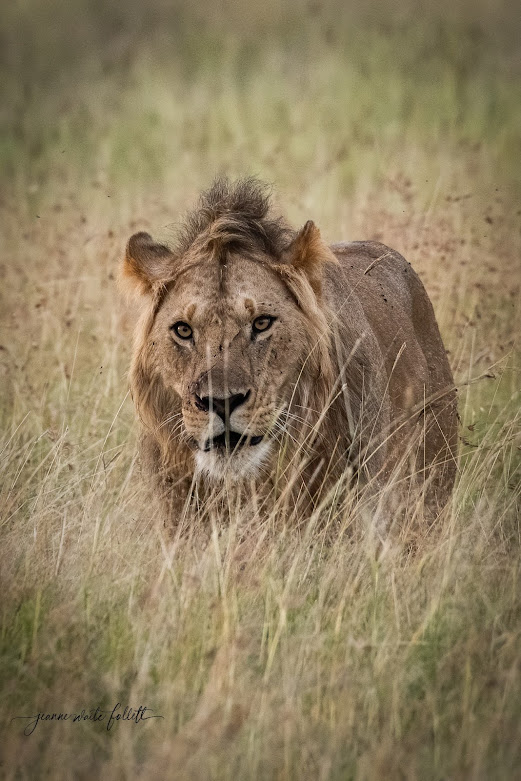 The below photo shows how little the wildlife is concerned about the safari vehicles.   Quite the opposite.    Many have learned how to use the vehicles for their own purposes, for instance, a shield while stalking prey.
It also illustrates how the vehicles are set up for photographers.  David is riding in the front seat in the vehicle at right.   His camera is attached to a monopod that he can lower to get ground level views.   Here, though, with the lion so close, he has pulled it to window level so as not to attract the lion.

Also you can see the horizontal bars in the window opening for the two photographers in the middle and back seat.  They can shoot low or high.   Also visible are the beanbags they use to stabilize their heavy cameras and lenses 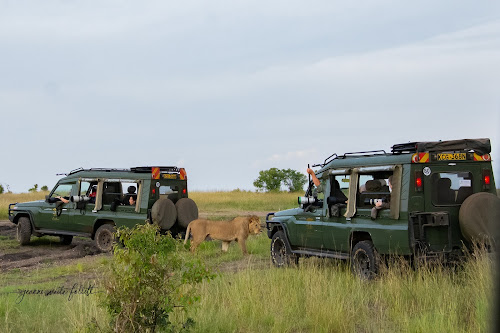 Here’s a closer photo of a vehicle that shows the mud.   That mud-caked thing in the window opening is a beanbag.   This photo was taken after our return to camp. 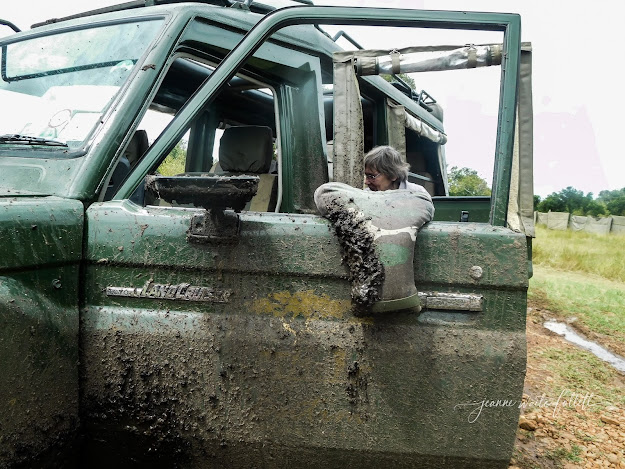 Now that the lions are out of sight in the bushes, we head for the wide open savannah that is a favorite of cheetahs.   And there she is in the long grass. 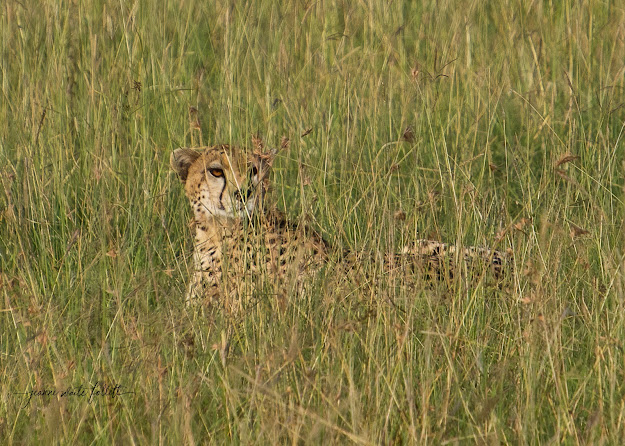 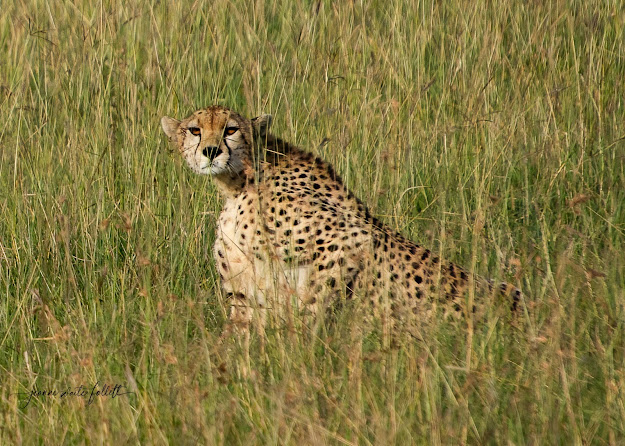 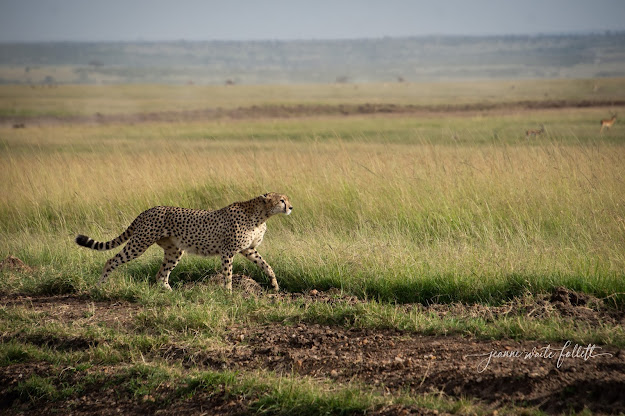 At certain times of day, such as when the sun is rising and setting, the light hits the cheetah’s eyes at such an angle that they seem to glow like amber 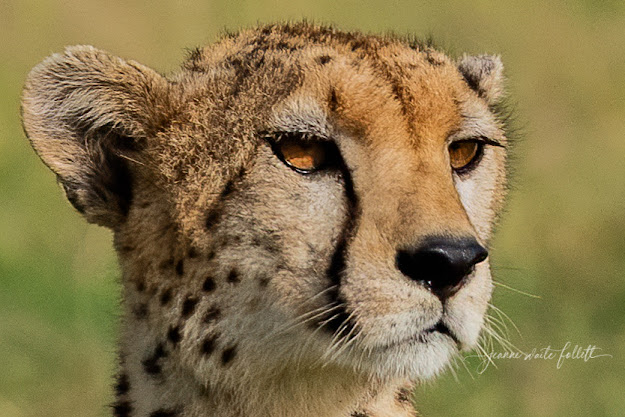 We watch the cheetah for a long time and when it becomes obvious that she isn’t going to do anything exciting, we drive a short distance away where there are zebra and topi.   I am thrilled to find the beautiful lilac-breasted rollers are using the zebras for perches where they scan the ground for insects. 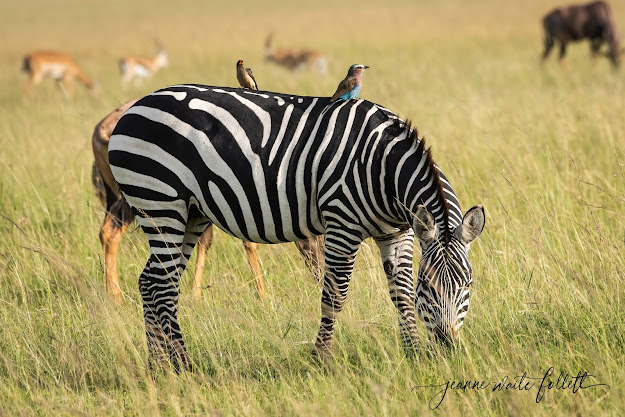 This zebra has a red-billed oxpecker and a lilac-breasted roller on its back. 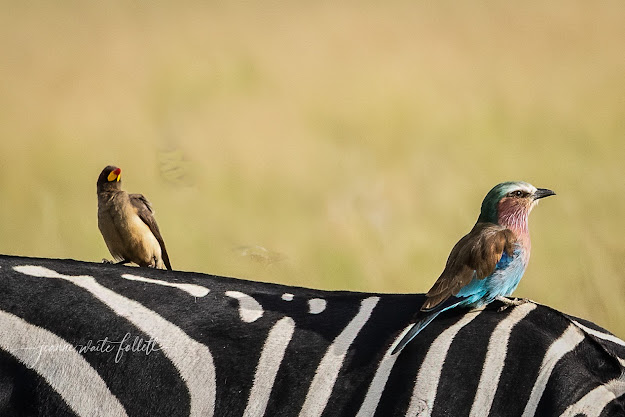 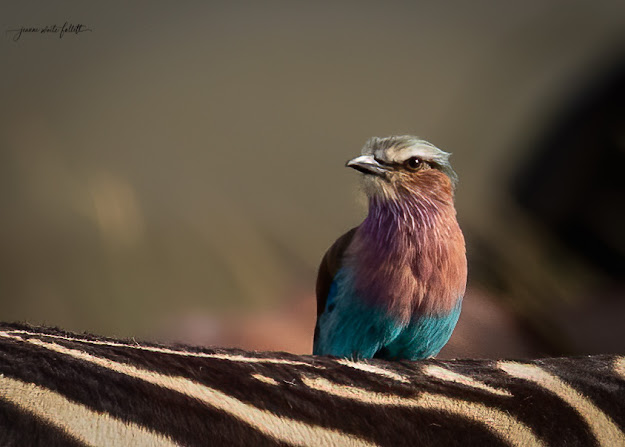 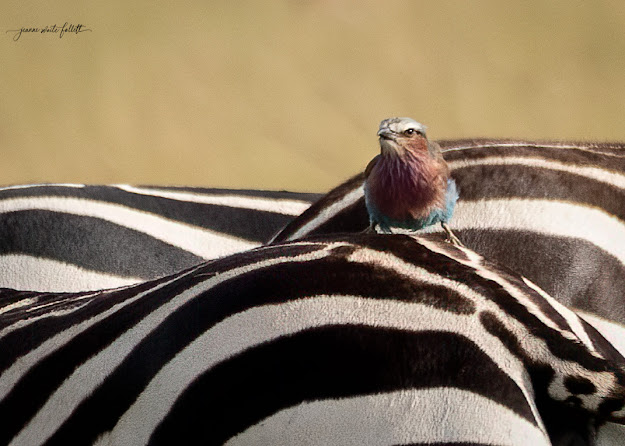 A lilac-breasted roller on landing approach. 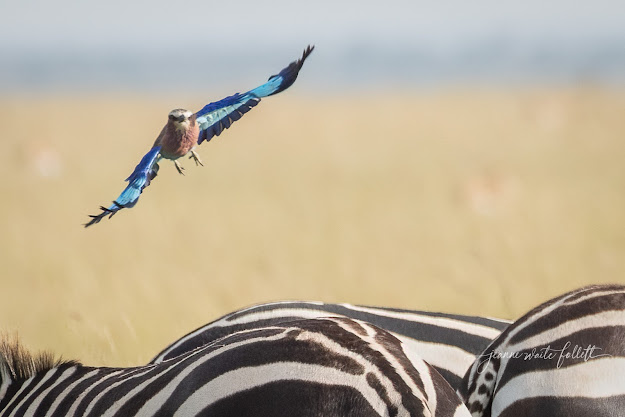 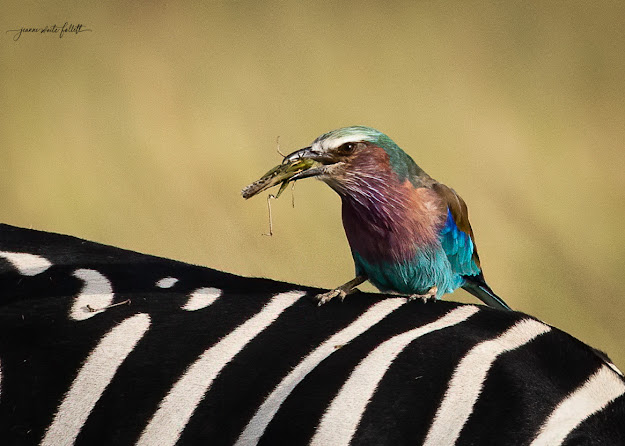 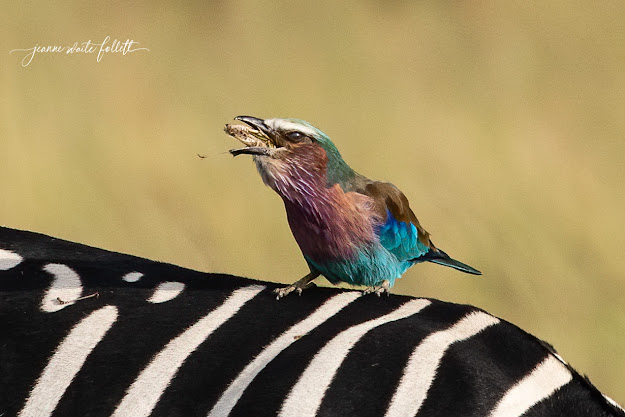 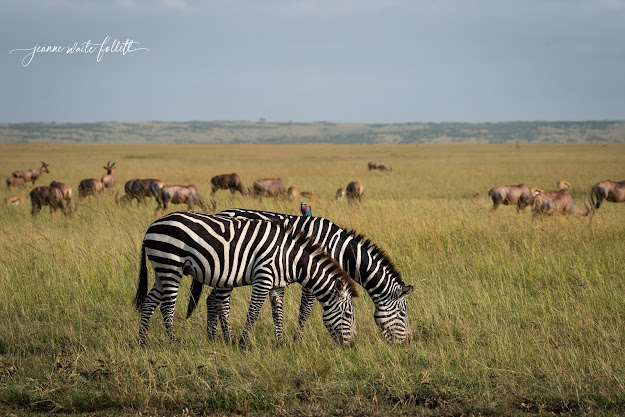 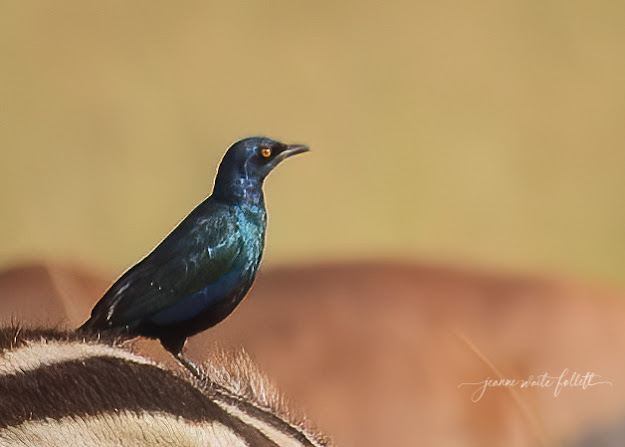 Even a starling got in on the action.


On the way back to camp for our mid-day break, we pass a warthog family with these two juveniles. 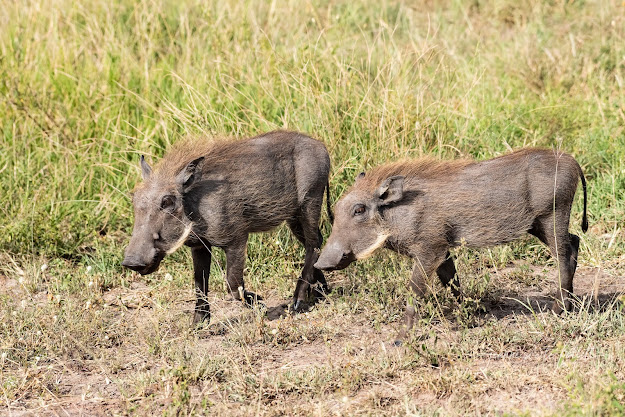 And, quite a way off in the savannah, I spot some topi bounding through the grass.   It’s hilarious and not the normal gait you see. 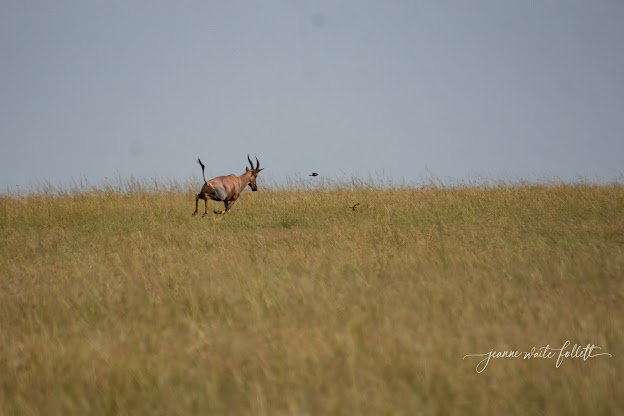 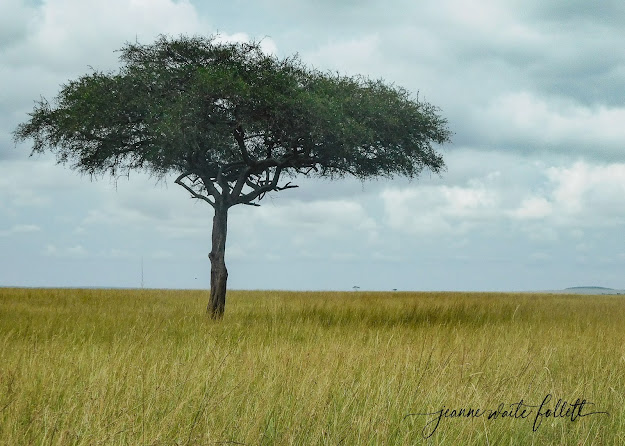