The 2021 Africa Journals, Ch. Four: In Which a Behemoth has a Bad Day

In Which a Behemoth has a Bad Day

The path of least resistance is the path of a loser.--HG Wells

My laptop continued to snap, crackle, pop when I plugged in the power cord.

My laptop snapped, crackled, and popped even when I unplugged it.

Murphy’s Law was alive and thriving in Botswana.

The rooms at the Pangolin Chobe hotel are a delight.   Roomy, unique, and with lots of room to spread out the camera and computer gear.   It is surprising how much extra stuff I have to take in that regard and I don’t take anywhere near as much as Marg does.   She takes enough computer and photo gear to supply a brigade of photographers.

Marg’s air conditioning was eventually repaired after two or three visits.    My computer continued to act like Rice Krispies, even when not plugged in. 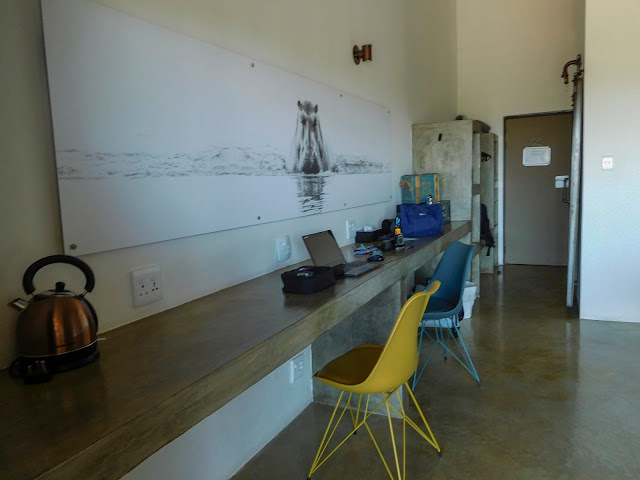 We were on the river early the next morning, dawdling along in one of the braided waterways, when Marg said, “Those hippos are fighting!” 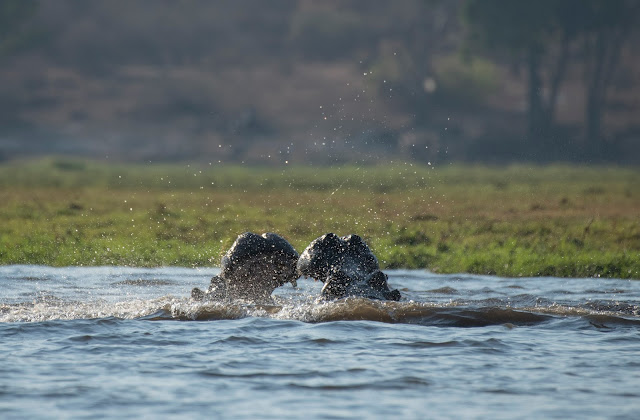 Sure enough, two huge hippos were jaw to jaw, each exposing an impressive array of fearsome weapons in those wide-open mouths that can stretch open four feet or more, or 150 degrees!   And those lips are two feet wide!

The most visible and threatening are two curved ivory tusks (canines) that can grow as long as three feet.   They are honed to cutting edges and can easily cut a ten-foot crocodile in half. 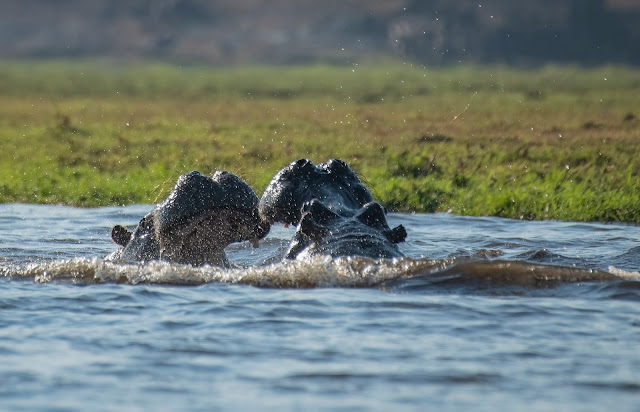 On the bottom jaw, two horizontal teeth grow straight out and are used for stabbing.   Though the tusks and those two rapiers are the most visible, hippos have thirty-six teeth altogether.

The open mouth is used to show dominance or threaten other hippos or humans.  It is mostly the males that use this tactic, as if an animal that’s five feet at the shoulders and measure between 10 and 16 feet in length, and weigh between 3500 and 9900 lbs.

Besides that, they can outrun a human at 30 mph.

The hippos we saw that were faced off with each other were probably deciding a case of a territory.   After the mouth-to-mouth stuff, one hippo left and went back upstream. 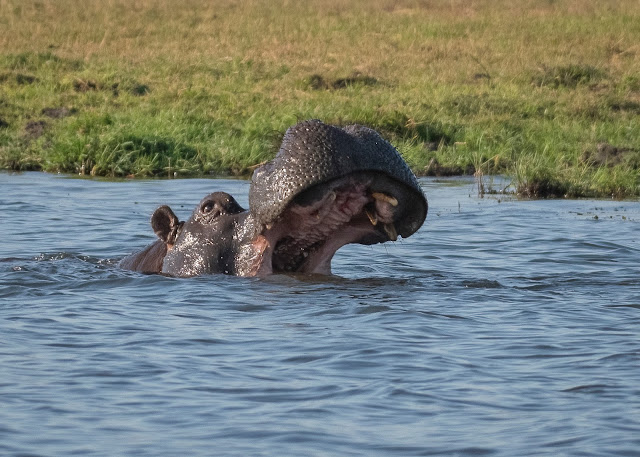 That’s when the second hippo opened its mouth to its full extension, offering a full view of all its teeth.   Now that the other hippo was gone, it remained like that for some time, then closed its mouth and waded toward a nearby island. 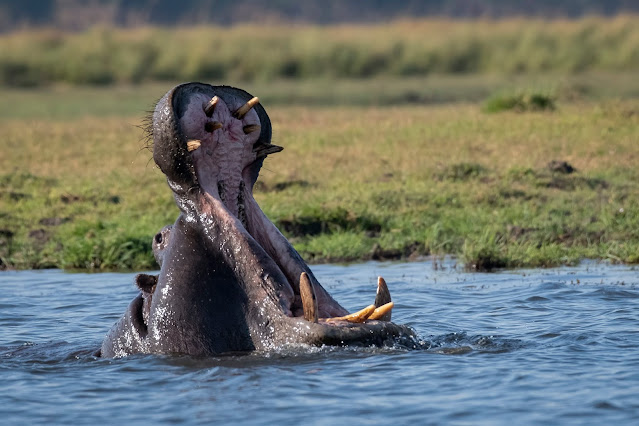 Sure,  you're tough now that the other hippo left the scene.

Just to make sure the other hippo knew he was still a big, bad hombre, the hippo proceeded to spray its feces in the river, tail whipping back and forth to distribute it. 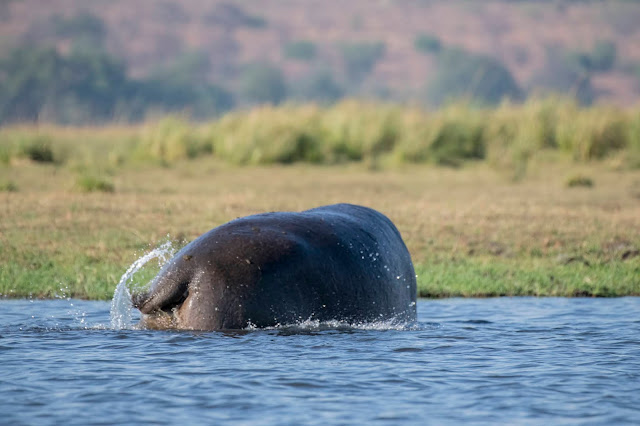 Being faced down by another hippo wasn’t the only indignity for our fearless fat boy.   A heron  landed on its back as it made its way toward the island, apparently intent on getting out of the water and grazing some.   It takes a hippo 150 lbs. of grass to satisfy its appetite. 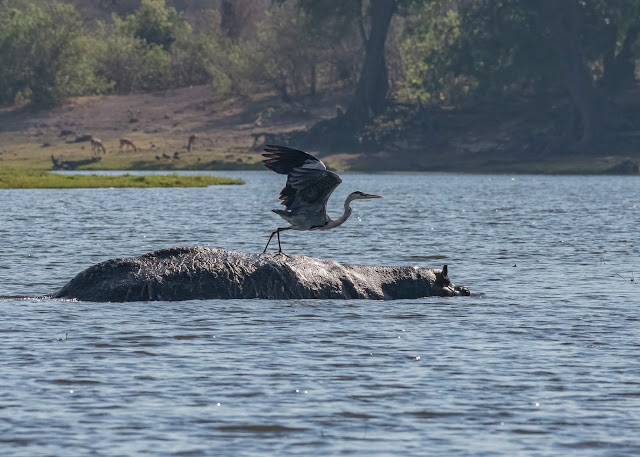 The hippo made another bad choice.   Stretched flat out on the point of land was a crocodile. 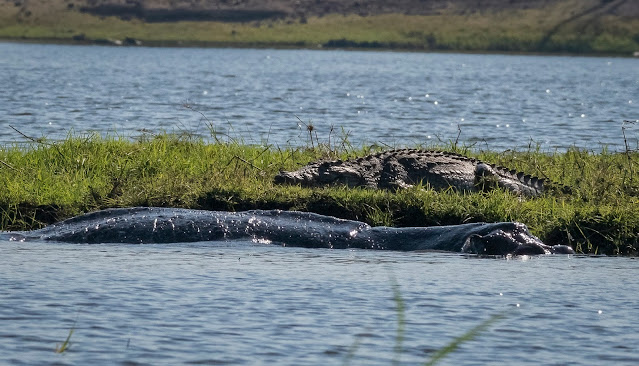 Our hero seemed to think about it for a while, then he went back into the water, defeated for a second time that day.

Other sights along the Chobe River: 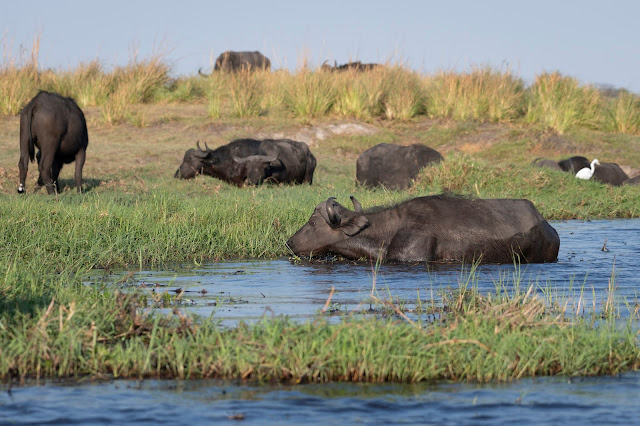 Cape buffalo look so harmless but are actually one of the most dangerous of Africa's animals. 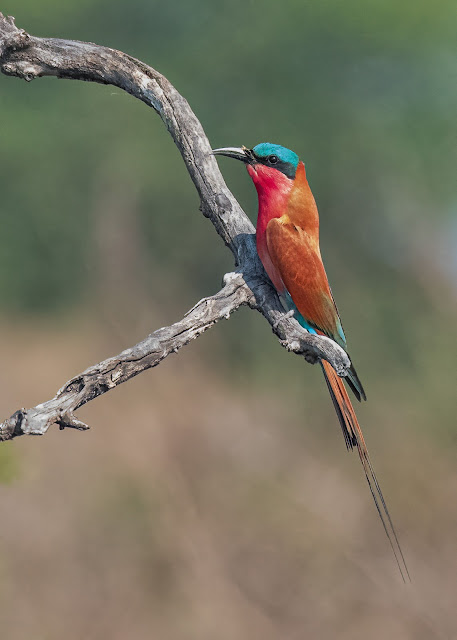 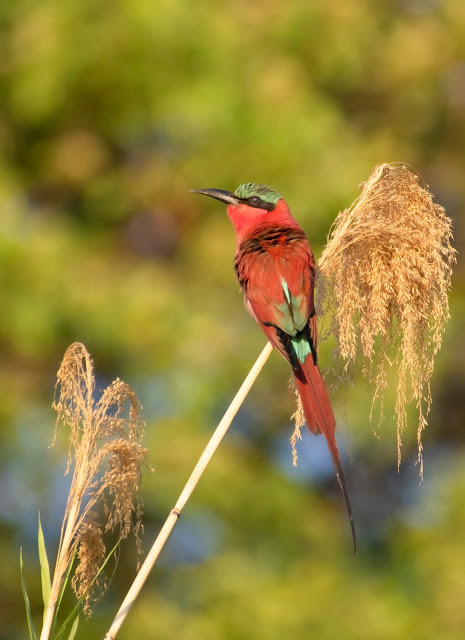 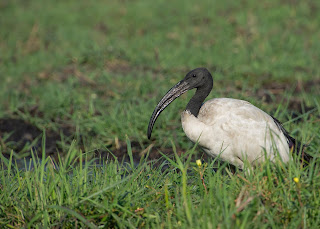 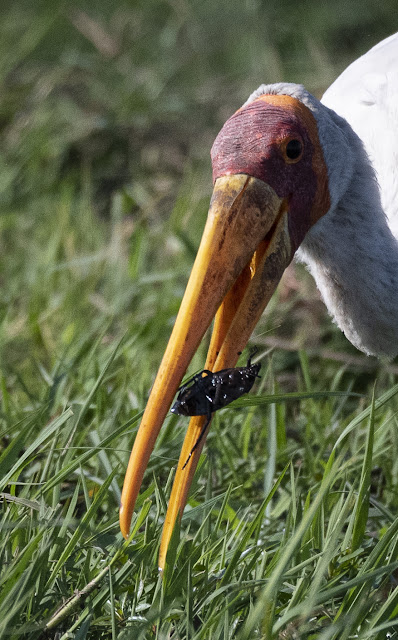 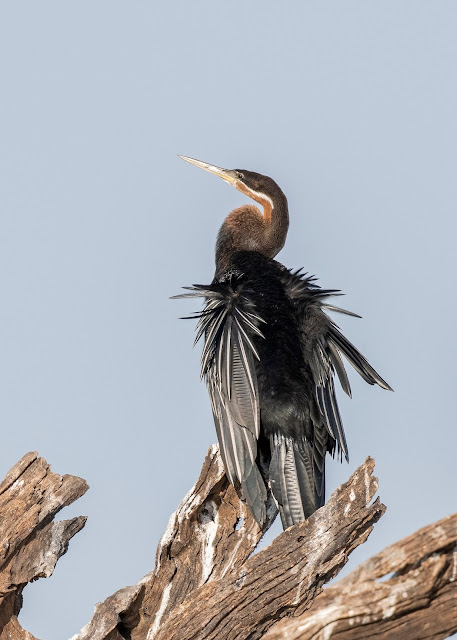 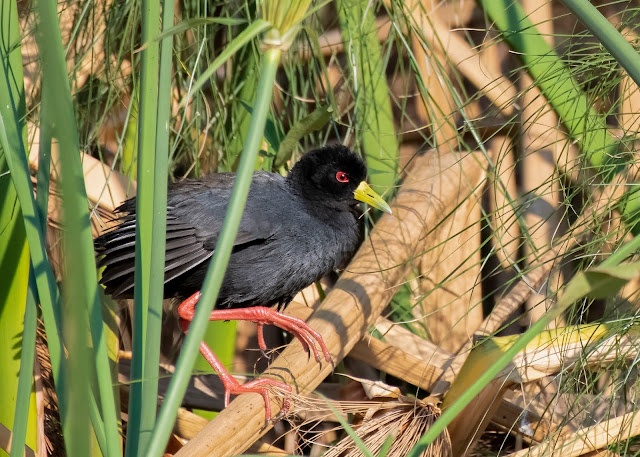 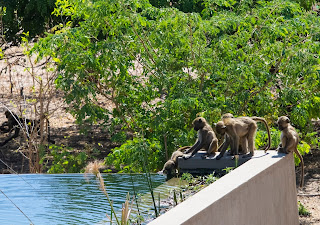 Baboons drinking from the infinity pool at Pangolin Chobe hotel. 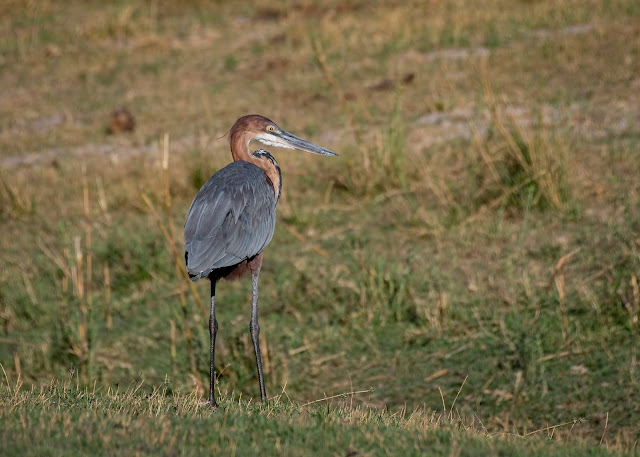 Goliath heron, largest of the herons Posted by Gullible at 6:59 PM
Email ThisBlogThis!Share to TwitterShare to FacebookShare to Pinterest
Labels: Africa 2021, Chobe