The Aussie Journals, Ch. 11, A Pictorial Essay on the Kiwi

The Kiwi is a totally usele… uh, I mean, totally unique bird purported to live only in New Zealand. Much like Bigfoot, Yeti, and the Loch Ness Critter, sightings of the usele…uh, unique Kiwi bird are anecdotal.

Its champions insist that the usele….ahem, unique Kiwi is seldom seen because it is semi-nocturnal. Rumored to be the size of a chicken, those who claim to have actually seen a Kiwi bird report that it is covered in bristly, hair-like feathers. In other words, brown and fuzzy. And, they say, it lays olive-green eggs.

Further reports allege the...excuse me, unique bird has two inch long wings, which ARE useless. It has no tail. Some of the more preposterous witnesses say the bird’s nostrils are at the end of its very long beak, and that it has only three toes on each foot. 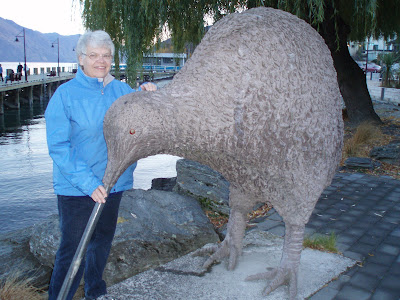 Bird fanciers report that the female lays an egg one-quarter of her weight (which can reach nine pounds), and then the male takes over with an eleven week incubation, which pretty much shoots his summer, wouldn’t ya think? Then, they say, if the female comes back and lays another green egg, the male has to sit tight even longer.
After all this care, neither parent feeds the fully-clothed chick that emerges, though Dad, probably weakened by sitting all that time, sticks around to make sure junior eats—after it finishes digesting all the yolk in its stomach. Moreover, these researchers claim, these usele…unique Kiwis can live up to twenty years! 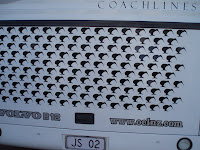 rs are adamant that the Kiwi bird exists, and its likeness is found everywhere,

even on the rear engine hatches of motor coaches. Souvenirs featuring the Kiwi bird have flooded the market, and I suppose if enough people actually believe there really IS a Kiwi bird, then some day it might come to pass, kind of like wishing on a star or before you blow out the birthday cake candles. 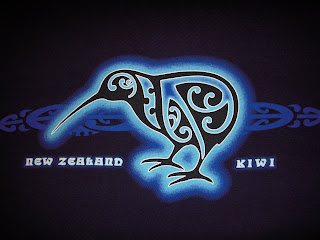 
It is, however, generally accepted that there is only one way to prepare a Kiwi, should one actually catch one, that is, and have the nerve to eat the national bird of New Zealand. The process, though involved, is relatively simple.


Complete instructions, with pictures, appear
below: 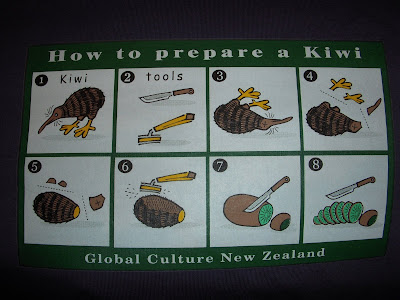