The Best Political Phone Call Ever

The phone rings. I say "hello" and can tell by the silence afterwards that it's another one of those political candidate calls. I almost hang up. For some reason I don't, and what happens next is priceless.

"Hello," says a woman's voice THICK with ummmmm......... accent? (I'm being ethnically and politically correct here, I hope.) Then she begins to read a halting, barely understandable spiel for "her" candidate. She speaks rapidly, and my brain is three or four sentences behind, trying to translate what she’s saying. Apparently she reaches the end of her written statement and asks, "Can we count on your vote for Mike Smith for U.S. Congressman,?" I'm not sure I've heard her correctly, trying to recall his name from the list of candidates that I am aware of.

"I've never heard of him," I respond.

"Oh. Well. Ummmm……. I have some information here about him," she offers.

"Wait a minute," I say as some of her previously spoken words are finally translated in my mind. "Did you say 'Florida?’ U.S. Congressman for Florida?"

"I'm in Alaska! Why are you calling me?"

No wonder they can’t figure out who wins in Florida. 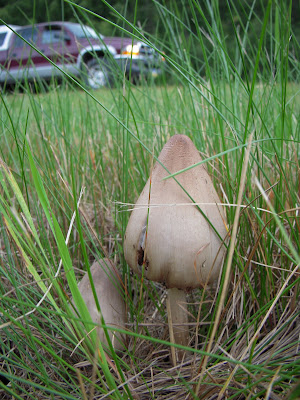 What do these mushrooms have to do with politics? Ah, just think about it. As the saying goes, "kept in the dark and fed.............manure." Actually they are some new ones I found this evening when I ran out of the house to escape the political phone calls. I spent five hours picking up roadside litter, and not a single politician was able to reach me.

Mike Smith, whoever you are, sorry, but you won't be getting my vote.