In Memory of GB

(Originally published ten years ago, this story is presented again in memory of GB.   RIP, my friend.)

The Boulder Creek Journals, Ch 3
The Spell of the Campfire

Fiery fingers of orange stretched for the blue tarp tied overhead. Popping sparks jumped out at the unwary. Smoke drifted towards “beauty.”

The dark night and the chill in the air announced the imminent arrival of winter at this elevation. Nearby, small tributaries of braided Boulder Creek babbled and a slight breeze rustled the moose-browsed tops of willow thickets. Bright yellow cottonwood leaves broke free of their branches and fluttered to the ground, carpeting our campsite with gold. Quarters of fresh moose meat cooled on the nearby tree stand. At the far upper end of the valley, a golden half moon silhouetted puffy clouds as it topped the mountain ridge.

Around the campfire that enchanted night, none of us moved, though light gray ash dusted us like softly falling snow. Howard had added armloads of split dry spruce to the conflagration, proving his theory that a big fire doesn’t smoke much. When Howard fueled the fire, the circle became large enough to accommodate all 15 of us sitting in folding chairs or on log stumps around its circumference.

And so it was, late one night long after dinner, when the hands of watches—had any of us been  looking—would show the hour nearing midnight, after the stories and jokes were shared, past hunts were relived, missing friends were called to mind, and a comfortable silence settled upon us, that G.B. began to recite while we all sat transfixed, staring into the fire.

A bunch of the boys were whooping it up in the Malemute saloon;
The kid that handles the music-box was hitting a rag-time tune;
Back of the bar, in a solo game, sat Dangerous Dan McGrew,
And watching his luck, was his light-o'-love, the lady's that's known as Lou. 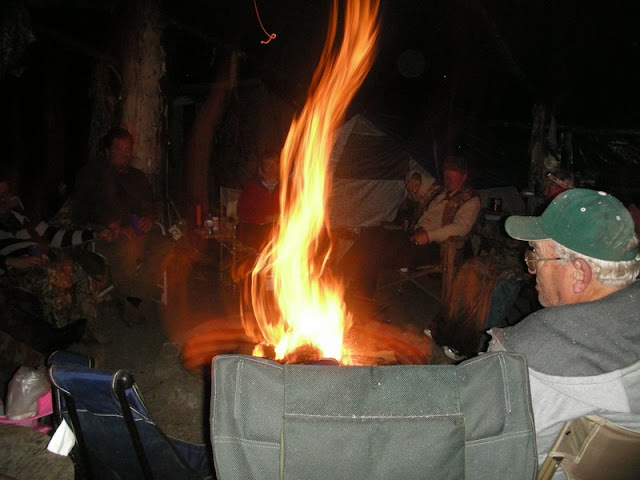 The well known words of Robert Service joined us around the fire, their cadence and drama conjuring images of pioneers, gold rushers and notorious hooligans. The Klondike gold rush and the harshness of the Canadian Yukon figured prominently in Service’s poems and when he described the climate and the peccadilloes of mankind, he did so with the authority of experience. Most of us who listened to his words around the dancing fire that night had been to Dawson City where Service lived for several years, where his cabin is now owned by Parks Canada.

We’d been to the Malemute Saloon outside of Fairbanks where his poems were recited daily to enthralled tourists. And, as long-time Alaskans, we felt a kinship with this man who once said, “The only society I like is that which is rough and tough – and the tougher the better. That’s where you get down to bedrock and meet human people.”

When the tale told of the mysterious stranger in the saloon playing the piano, we recognized in our very souls the portent of Service’s poetic words:

Were you ever out in the Great Alone, when the moon was awful clear,
And the icy mountains hemmed you in with a silence you most could hear;
With only the howl of a timber wolf, and you camped there in the cold,
A half-dead thing in a stark, dead world, clean mad for the muck called gold;
While high overhead, green, yellow and red, the North Lights swept in bars?—
Then you’ve a haunch (sic) what the music meant…hunger and night and the stars”
We’d been there, too.

So as not to break the spell, soft applause and muted cheers sounded as G.B. spoke the final words of “The Shooting of Dan McGrew,” and the stranger died in the arms of the lady known as Lou, who kissed him and pinched his poke of gold. Then, as the fire drew our eyes once again, he began another.

There are strange things done in the midnight sun
By the men who moil for gold;
The Arctic trails have their secret tales
That would make your blood run cold;
The Northern Lights have seen queer sights,
But the queerest they ever did see
Was that night on the marge of the Lake Lebarge
I cremated Sam McGee.
Captivated by the story, mesmerized by the fire, we sat in silence and dreamed our visions while G.B. spoke as if telling us of something that had happened to him, something so heavy that his soul needed surcease from its weight. On and on he went, unburdening himself, and each of us thought of the many times we’ve cursed the cold in this harsh land that we love and could never leave.

We smiled knowing, understanding smiles as the words of the penultimate verse reached us:

And there sat Sam, looking cool and calm, in the
heart of the furnace roar;
And he wore a smile you could see a mile, and
he said: “Please close that door.
It’s fine in here, but I greatly fear you’ll let in
the cold and storm—
Since I left Plumtree, down in Tennessee, it’s
the first time I’ve been warm.”
There was little to be said after quietly extending our thanks and congratulations.

By now the clock hands had merged and pointed straight up, long past the hour when men who would hunt ungainly ungulates in the early morning should have been asleep. Still caught up in the spell of this perfect, magical night around a shared campfire, we soon drifted off to our tents to sleep and dream as coyotes yipped and yowled in the forest.