The Kenya Journals, Ch. 22: Breakfast with Cheetahs on the Masai Mara

Chapter Twenty-Two:
Breakfast with Cheetahs on the Masai Mara

These magnificent species of Africa - elephants, rhino, leopards, cheetah, the great apes - this is a treasure for all humanity, and they are not for sale.   They are not for trade.   They need to be valued and preserved for humanity.  We all need a global commitment to that.--Patrick Bergin

We are on the south side of Rhino Ridge where black rhinos once roamed.  Now, there are far fewer and cheetahs have moved into their territory.  The rhinos, however, prefer to remain in the dense bushes so they might be there after all, says our guide Moses.

We watch a dark-maned lion cross the flank of the hill and disappear into the bushes, and I have little hope of finding today’s photo quarry—the cheetahs themselves—if this is lion territory. 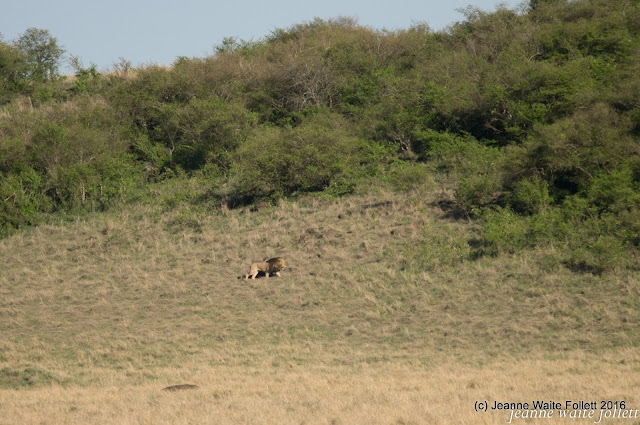 We pass Rhino Ridge and encounter Mama  Duma, as the guides call her.   It means “Mama Cheetah.”

Her proper name is Dr. Elena Chelysheva, a scientist from Russia who is studying the endangered cheetahs of the Masai Mara.  The research project she founded is called MaraMeru, and this morning she, too, is looking for the cheetahs that live near Rhino Ridge. 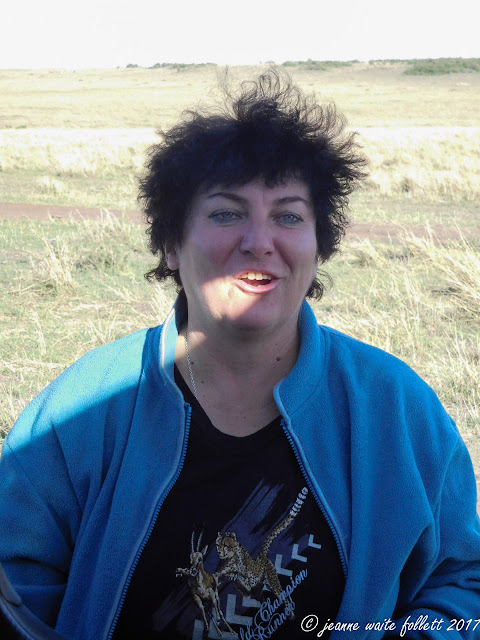 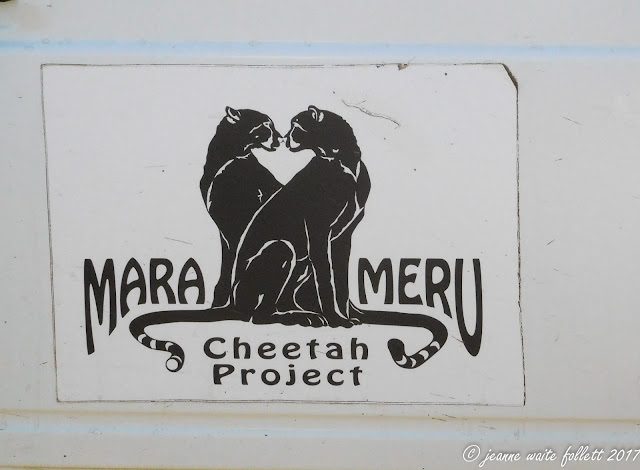 Marg, who is a supporter of Mara Meru and Cheetahs Forever, chats with Dr. Elena and asks if she could come to Governor’s Camp and give a talk about her project.

We drive on and there they are—Amani and her two 10-month-old cubs, sound asleep in the grass, occasionally raising their heads to survey their surroundings.   One cub stands and approaches its mother, where it receives a brief grooming. 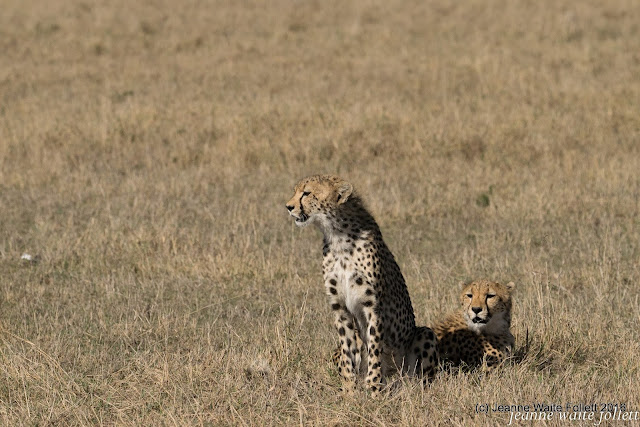 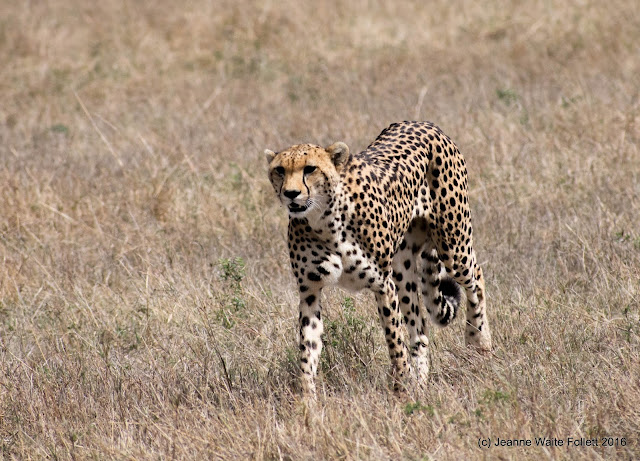 Soon, the cats are too warm and they head downhill to an acacia tree with a small patch of shade under it.  We wait.  It appears the cheetahs aren’t interested in chasing down their breakfast, so we break out our picnic breakfast. 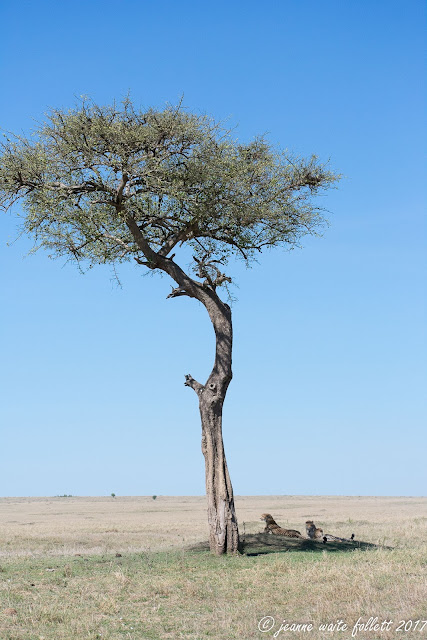 In the container is a Ziplock bag of cooked sausages and bacon.   Shortly after I bite into a piece of bacon, one of the cubs raises its head and stares at me. 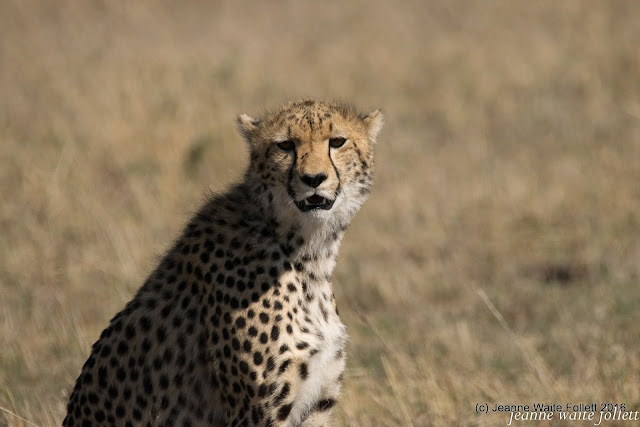 The wind is at my back, and I have no doubt it can smell the luscious aroma of smoked bacon.  Usually, the cats pay the safari vehicles no mind, but bacon trumps that and it makes me uneasy that one cheetah is considering whether or not I am a food source.


This evening,  Dr. Elena arrives at Governor’s Camp.   We gather in the open air lounge and watch gorgeous photos of cheetahs on a screen while Dr. Elena talks about cheetahs and her 13 years of research.

She illustrates how similar the physical structure of a cheetah is to a greyhound.   Both have deep chests, large hearts, and narrow waists.  The main difference, though, is that greyhounds can run long distances at top speeds, while the cheetah can run 60 to 70 mph for less than a minute, though its hunt chase is usually less than that top speed.

Cheetahs have long been a part of civilizations and Dr. Elena shows an illustration of two leashed cheetahs in an ancient Egyptian court. 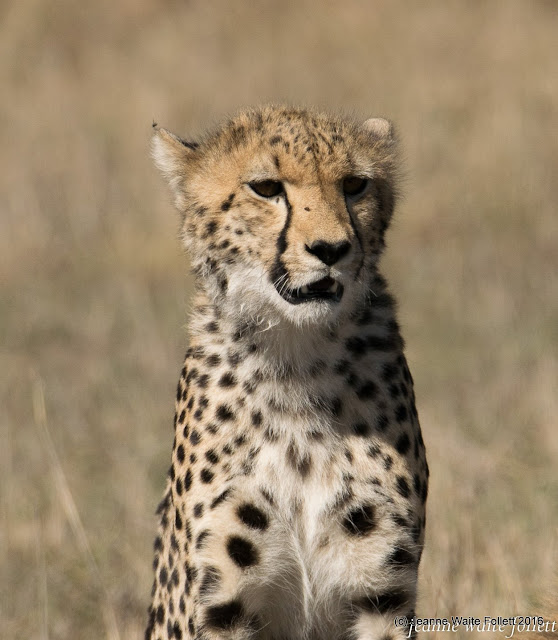 At the beginning of the 20th century, she says, there were an estimated 100,000 cheetahs.   Now, that number if down to about 7,000.   Loss of habitat, reduction in prey, and poaching all contribute to their decline.

Another reason is that there is only a 7 to 15 (75.6 % mortality rate!) percent survival rate of cubs to independence.  Females usually remain with their mother until 24 months, while males usually leave on their own at about 16 months, unless chased off by another male.   The life span for males is eight years, and 13 years for females.

Cheetahs are also preyed upon by baboons who chase cheetahs from the shade.   Along with hyenas, baboons will kill cheetah cubs, but then, cheetahs kill the young of those two animals.   Leopards also kill cheetahs. 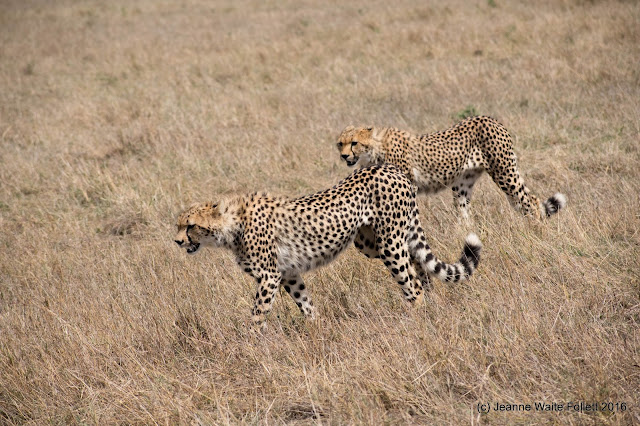 By the time Dr. Elena finishes her intriguing talk, it’s time for dinner and the nightly entertainment:   the hippo march from the river to the grassy savannah,  and the little genet’s appearance.

Then, we are escorted to our tents by a guard armed with a stick and a flashlight to protect us from dangerous wild animals.
Posted by Gullible at 2:40 PM