I was home after eight days in Tent City at Boulder Creek moose camp. I missed it, wanted to return. I might do that later this week. First, though, I needed a long, hot shower with plenty of soap and shampoo.

After undressing, I approached the bathroom scale with trepidation. At camp I ate everything in sight and went looking for more. I carbo-loaded. I browsed all day. I say “browsed” because this was moose camp and that’s what moose do. They don’t graze. I was anticipating an awful surge in weight that would negate much of my recent 30 lb. loss.

Making sure I placed my feet in the exact spot I always do, I began to move the weight on the balance beam. Then more. And even some more. When it balanced, I stepped off the scale and tipped my head down to read the dreaded result through the top part of my eyes, which, when I don’t have my glasses on, seem to be able to focus better.

I didn’t believe what it said. I stepped back on the scale and rechecked. I got the glasses and looked again. I had gained only one-quarter of a pound after lying around camp eating everything and anything, and pretty much not doing anything at all

in the way of calorie burning activities. Incredible. 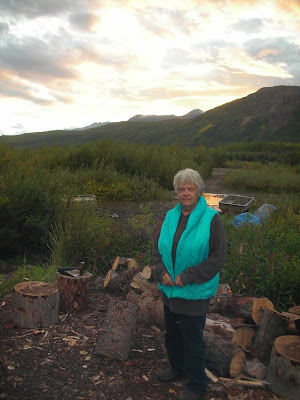 I thought about that for a while and reached two conclusions: 1) The rough ride into camp on my four-wheeler had beaten the crap out of me, and 2) I froze my butt off that first night.

I never was very good at math so I don’t know how to figure how much the stuffing or
the missing body part weighed, but it must have been substantial to account for the puny weight gain of only a quarter pound.

One night around the campfire the discussion turned
to how cold the nights and mornings were, and how
to stay warm in a sleeping bag.

“Do you know how to stay warm?” one of the guys asked Suzanne.

Call them what you want—hot flashes, power surges or your inner child playing with matches—they are guaranteed to open the floodgates of your perspiration pores. Twenty below zero and I’ve been on my back deck in shorts and a tee shirt, trying to cool off. Unpredictable and irksome, in the 16 years they have been pestering me I have detected only one constant: I will have a hot flash every night after I turn out the light and settle down to go to sleep.

It makes no difference if I turn off the light immediately after getting into bed, or if I read for hours. Time has nothing to do with it, as my erratic bedtimes prove. Every night for 16 years. Every night but two, and those two nights, when I needed them the most, my failing hormones failed me.

The first time was several years ago when I had paced a cold hallway outside the surgical suite where my husband was having an emergency appendectomy at two in the morning. When I finally got into bed at 6 a.m., I anxiously awaited the flood of heat that would warm me and make the three blankets unnecessary. I waited in vain—shivering.

The second time was my first night in Boulder Creek camp. I set up my Jan Sport backpacking dome tent in a clearing between the cottonwoods, inserted the “D” cell batteries into the air mattress pump and let it inflate the mattress to its proper size. I laid out my Kelty sleeping bag, a rectangular one as I can’t sleep in those straight jacket mummy bags. I stuck an “ess” hook in a loop at the top of the tent and hung the red Coleman fluorescent lantern, arranged my gear, and then went out to enjoy the campfire.

Later, I was comfortably warm after spending several hours around the campfire and even for a few minutes after I crawled into my tent. I say “crawled” because that’s what I had to do to get into my little tent. The other tents in camp were multi-room palatial lodgings, big enough to host the Eukanuba Dog Show (One of them had a zippered doggie door and I’d love to meet the dog that can unzip it.), or even all the Alaskan legislators now under investigation or indictment, as well as the witnesses against them and all the attorneys involved. Maybe even enough room for the press corps.


First the outer fleece jacket came off, then the turquoise down vest, thermal knit long-sleeved shirt, the tee shirt and the “binder” under that. Quickly I donned a long-sleeved fleece top with a high-necked collar.

I had to lie down to take off the jeans and undies, back-packing tents being heighth-challenged even for someone only five feet two inches. Fleece pants quickly got pulled on,
and I left the new wool socks from Costco on my feet. 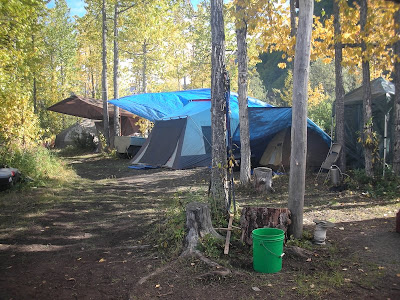 Part of Tent City Row. Mine's the itty bitty one just to the left og the shower cabaña on the right.

By now things (feet, hands, etc.) were getting a bit chilly. I unzipped the sleeping bag, and carefully inserted the Kelty fleece liner. Then I tried getting into the whole thing. After much struggling, twisting, kicking and cursing, I was fully inserted into the bag and liner and trying to zip up both. The liner zipped okay; the bag refused to zip the last thirty inches.

All was well, except my feet and butt were cold.

Then I had to roll over. I won’t go into the horrific details. Suffice it to say that the microfiber liner of the sleeping bag, the extra fleece liner of the insert, and the fleece I was wearing all combined to make movement impossible. I may as well have been in a mummy bag coated with Gorilla Glue on the inside. It got worse as time went on. My worn-out, arthritic shoulders require frequent changes of position. Throw into the equation that now all of me was cold, and I was not having fun.

Plus, my failing hormones failed me. No hot flash to warm me. After an hour or so of this impossible situation, I decided to get out of the fleece I was wearing and into the over-sized tee shirt in which I normally sleep. I managed to get an arm up to the zipper pull on the bag. It wouldn’t unzip, nor would it unzip when I wrenched my arm out of the bag into the freezing night air and tried the external zipper pull. I had never experienced claustrophobia before, but now I can cross that experience off my list.

Eventually, through the use of colorful and inventive language and much exertion, I got the bag unzipped. Off came the navy blue fleece top and pants, out came the fleece liner. I donned the big red tee shirt and slipped easily back into the sleeping bag. I unzipped the fleece liner and spread it like a blanket over the sleeping bag, then settled down to sleep. The lack of clothing other than the tee shirt made rolling over easier and the absence of the liner gave me more room. Finally I fell asleep, cold and tired. I never asked about the morning temperatures until the last day, when we were sure it had frozen during the night. The temperature that morning was 32 degrees. I’d be willing to bet the other mornings weren’t too much warmer.

My first task the next day was to set up the propane catalytic tent warmer that I’d hauled all the way in there. A five or ten minute burn at night, with window flaps open, of course, and a few minutes in the morning, and I was down-right comfortable for the next week.

Except when the sleeping bag coiled itself around me like a boa constrictor, that is.