Chapter Six
Smoke Gets in Your……


The acrid smell of wood smoke startled me awake at four a.m. Groggy, confused, I sat up and wondered why the smoke alarms weren’t squalling in frenzied warning. The carbon monoxide detector was equally as silent, its little red LED “0” fuzzy to my un-spectacled eyes, but visible across the bedroom.

Bedroom? Oh. Bed and blankets. Not tent and sleeping bag. Now I knew the source of the smoke smell, so I rolled over and went back to sleep.

At a far more civilized hour of the morning I got up and took another long shower, shampooing my hair twice, just as I had done the evening before. Standing on the bath mat drying off with a light green towel over my hair and face, once again I could detect the comforting smell of smoke.

I had arrived home late last evening after spending eight days at Boulder Creek in my husband’s former hunting camp. I’d unloaded the contents of the truck into the garage, spent some time trying to soothe the ruffled feathers and temper of Pablo the Parrot, and headed for the first shower in a week. Nothing I wore or took with me on the trip was allowed into the house without first spending quality time with the washer and dryer in the garage.
That left only one source for the smoke smell: me. Two showers, four shampoos,
completely clean clothing and I still smelled of the campfire. 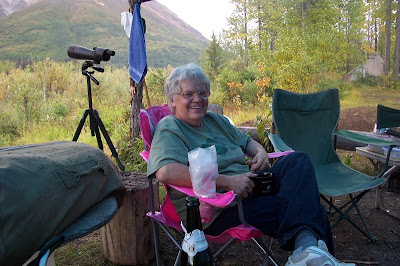 Me at Boulder Creek, photo by Suzanne

***
I didn’t like Tom when I first met him. Now, after 30 years, I wonder why I had ever done him such a disservice. After all, he was directly responsible for freeing Ken from a bad marriage, making him eligible to court and eventually marry me. The break-up occurred during a two week camping trip, all arranged by Tom, that we came to call “The Great Divorce Fishing Trip.”

Tom was funny, friendly, good-hearted, and Ken liked him a lot. 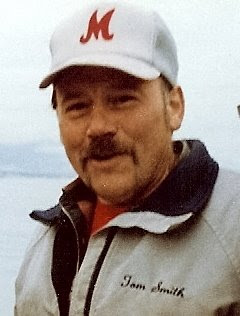 They shared a mutual love of fishing and hunting—and having a good time, which usually involved a lot of liquid refreshments.

Perhaps that was it. I didn’t drink much. But I think the most important reason was that Ken and I had been a couple only a few months when I met Tom, and those few months were in the artificial environment of a construction camp during the building of the Trans Alaska Oil Pipeline. In May of 1977, back in civilization for the first time as a couple, Ken and I were watching to see if our relationship would stand the test of real life.

Tom, on the other hand, had been working in Fairbanks rather than in one of the remote camps, a result of one of his many colorful adventures. This one had something to do with a borrowed truck running out of gas on a remote stretch of the haul road between construction camps, while the temperature plummeted to so many degrees below zero the mercury was AWOL. The ever resourceful Tom burned a can of motor oil in the truck cab, trying to keep from freezing.

The trip was unauthorized and the inclusion of a female construction worker in the journey was a strategic no-no. When the rescue party found them, they were lethargic from cold and coated with soot from the burning motor oil. In Tom’s defense, he claims he was only giving the woman a ride to see her boyfriend in another camp.

That didn’t sit well with Tom’s wife back in Fairbanks, who was—as Tom’s luck usually had it—in charge of dispatching rescue parties. Tom was yanked from the camps and worked in town after that.

Years later Tom would tell this story and many, many more with unbridled glee, reveling in every mistake he made. It was this ability to tell stories on himself and to laugh at himself that endeared him to me. But back then, in 1977, I didn’t appreciate this man who was trying to talk my new significant other into participating in a gold-mining venture of questionable worth.

With us that night in the cocktail lounge, was a man whose name I’ve forgotten. Dressed to the nines, far too slick for my taste, he may well have been another con man like Soapy Smith. He had access to the gold claim and some ancient heavy equipment, but no money. That’s where Ken came in, that and his ability to repair and run any machinery.

Ken bowed out; Tom and another man went gold mining with “Slickster Soapy.” Three months later they were back in town, broke.

****
Tom and his wife made fishing trips to the Kenai Peninsula every summer, and would visit us in Moose Pass. Eventually divorced, Tom moved closer to Anchorage and began to play a larger role in our lives. Part Assiniboine Indian, he was born in 1940 and raised on a reservation in Montana, where hunting and fishing became a lifelong passion.

In 1988, Ken and I were employed on a large construction job on Amchitka Island in the far Aleutian Islands chain. Ken was Master Mechanic and Tom worked for him as his Parts Foreman. We were joined by Suzanne, Tom’s significant other. Tom began to get antsy as August arrived and told Ken he was going to quit. Ken figured hunting season was calling and refused to allow Tom to quit.

By this time, Tom had found Boulder Creek and established the hunting camp that came to be known as “Tent City.” Every year, from before sheep season opened in early August, until after moose, caribou and bear season closed in late September, Tom would be there with as many of his family and friends as he could talk into making the journey. He would invite his bosses to go hunting with him as a way to get the time off. If that didn’t work, he’d quit his job to go hunting. 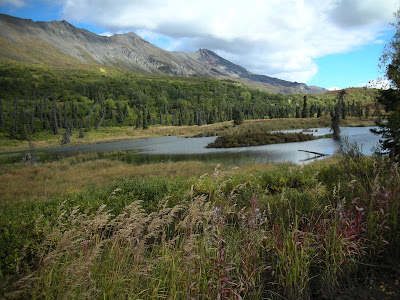 Along the trail to camp.

He spent his last hunting season in the Boulder Creek camp so weakened by cancer that nothing but sheer grit and the care of his friends got him through that season. Then he was hospitalized.

Lying in his hospital bed, Tom looked at me as I held his hand. “It’s kind of nice to know when,” he said. I chose not to understand what I had heard, not to believe what I knew was true.

Ken and I were to leave for California in two days and I wasn’t sure if we would see Tom again before we left. “Don’t go anywhere without telling us,” I said, thinking that perhaps we could stop by the hospital when we came back to Anchorage for our flight. “And, I mean anywhere,” I added, my words admitting the possibility that my heart refused to accept.

Tom was released from the hospital that afternoon after he told his doctor that he wanted to go home to Wasilla. A day later, with G.B. at his side, Tom died in Suzanne’s arms.

Some things have changed at Boulder Creek camp since Tom left. Matt has taken over its stewardship and, like Tom, is encouraging the younger generation to join the older group that has been going there for years. His son Adam brought Sergio, Chad and Will.
Howard, with his wife Chris, brought Joey and Travis. Don, at 74, has now taken over the title as the oldest man in camp, an honor that used to be held by my husband. Mel and “Crazy” Larry, two of the men who helped Tom establish this annual hunting camp, were there, as well as G.B., Suzanne, and me. 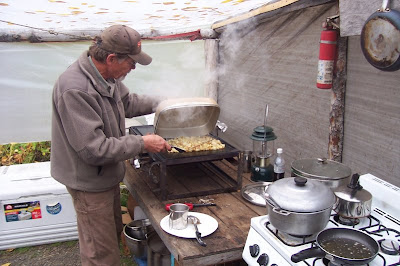 The kitchen has been upgraded with the addition of a propane range, replacing the Coleman stove on which Tom cook ed. Once the domain of my husband, Will and Chad split and stacked firewood faster than Matt and G.B. could fall the beetle-killed spruce and haul them into camp.

An aluminum framed cabaña has replaced the blue tarp wrapped around four trees that formed the shower stall.

The fire pit has been improved with the addition of a slice of 48-inch culvert set a foot into the ground and ringed with rocks. Around its circumference, folding chairs have replaced the log stumps, which now are used as side tables. 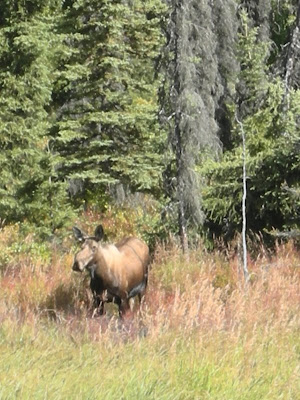 Where there are cows, there must be bulls, but none appeared.


Yet, some things remain the same. The whistle that Tom used to signal the end of hunting for the day and the beginning of Happy Hour hangs from a hook in the kitchen, a bottle of Bailey’s is next to the coffee decanters, and drinking water is still boiled for ten minutes, cooled, and poured into a clean jug. Tender backstrap steaks from fresh moose are served in camp. Years ago Ken and I had introduced the group to the liverwurst made by a game processor at Indian Valley Meats, and today the liver is taken to the same processor. 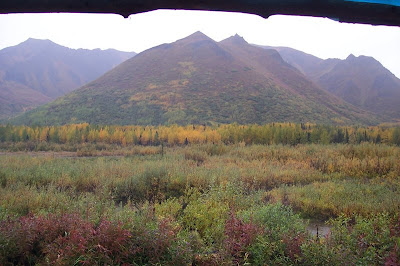 And, the outhouse still has a million dollar view.

Going into camp or coming out, it is mandatory and traditional to stop at Blackberry Knob for a sip of that sweet brandy liqueur and to remember those who are gone.

Tom was cremated and his ashes were spread by family and friends at all the well-
known hunting spots in Boulder Creek valley and at Blackberry Knob.. He has now been joined by Ken, and others have expressed their wishes to be placed in those happy hunting grounds also when their time comes. 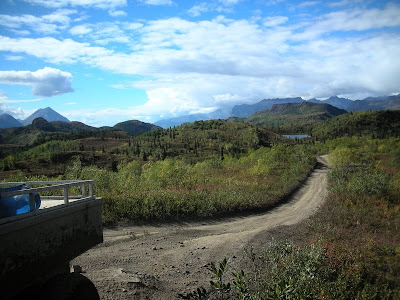 The view from Blackberry Knob.

In the meantime, dry spruce snaps and pops in the fire pit, the orange flames reaching for the blue tarp overhead that protects us from rain and snow. Crazy Larry sits for hours, patiently sharpening all the hunting and whittling and kitchen knives in camp. Matt plans the next day’s menu and G.B. casts a spell over us reciting Robert Service’s poems about the north country. Soft-spoken Mel, who’d faced down a young bull of illegal size earlier in the day, sits beside me, clinks his cup of wine to mine, and says, “To good friends.” 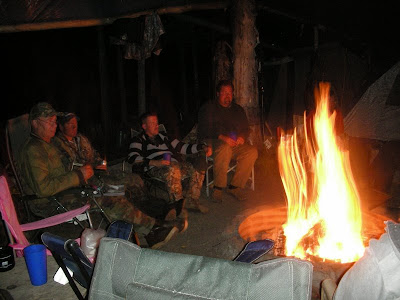 
Stories about Tom, and now Ken, are told and retold, and despite what Howard says about big fires being smokeless, we must be getting smoke in our eyes because they glisten and ripple with tears.

I wish that somehow I could grasp a handful of that smoke and bottle it so that I could keep it forever. But then, perhaps its comforting aroma has permeated my soul, where it will always remind me of friends, a shared campfire, and the man who brought us all together in its warmth.