It wasn’t the appointment for physical therapy on a troublesome shoulder that sparked my imagination. Nor was it the seventy-mile round trip drive into Seward along a National Scenic Byway.

The ice-glazed highway was worth not even a blip on my muse's radar, until the rear end of my truck attempted to pass the front end, that is. I switched into four-wheel drive and ended that excitement. The highway guys had etched deep grooves into the ice with a serrated blade mounted on some type of equipment—either the grader or the belly-mounted blade beneath the sand truck. The road was sprinkled with a sodium-treated sand, though at these temperatures neither the sand nor the sodium chemical do much good and are quickly kicked off to the sides of the pavement. Nonetheless, in four-wheel drive, and studded tires all around, I was able to drive at relatively normal speeds without too much concern.

And, speaking of temperatures, not even the thermometer in my kitchen with its remote sensor could stir up any interest. This reading doesn’t look too bad—just a normal winter’s day—until you notice the thick black horizontal band to the left of the gauge, That means minus, as in below zero. Yes, eighteen below zero. 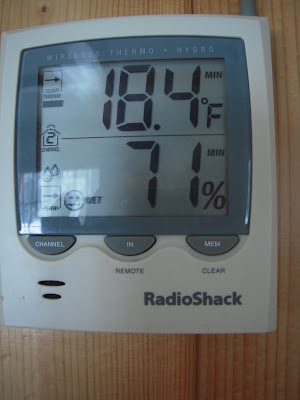 I dressed normally in jeans and a fleece jacket. The only concession I made for the cold was the long-sleeved shirt I wore. So you don't think me incredibly foolish, I threw the Carhart black-lined coat, my winter boots, fleece hat and ski gloves in the truck also. In the back, in a plastic crate, were the things I normally carry year-round: emergency road flares, jumper cables, tow strap, etc. And blankets. I always carry a couple wool blankets for emergencies.

Besides, why whine about eighteen below. It’s forty below in Fairbanks right now, and up in the Matanuska Valley where Gov. Sarah Palin and her family live, the wind is blowing off the glaciers, making temperatures similar to those at my house seem a lot, lot worse. No, it wasn’t the cold that got my attention as I drove to Seward.

Nor was it the noon-day sun, which at this time is so low on the horizon it shines beneath the sun visor in my truth. Well, if you’re my height it does. So with the sun shining in my eyes and reflecting off the icy highway, I drove into Seward barely able to see approaching traffic or any moose that might be on the road. So far, so good. Just a normal day.

Twelve miles down the road, however, a new speed zone woke me up and seized my imagination. First, it slowed traffic from 55 mph to 45 mph. Then, crossing Trail River bridge the speed limit was 20 mph. Ditto with Falls Creek bridge just a hundred yards or so away. It picked back up to 45 mph for a mile or so, then again dropped to 20 mph over Ptarmigan Creek bridge. After that, it was back to 55 mph all the way into Seward. 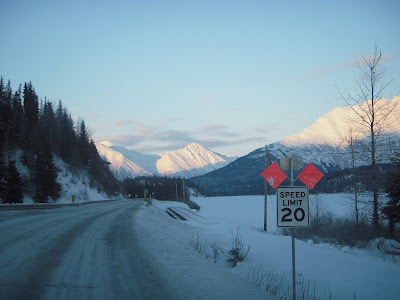 This photo is Trail River bridge, taken as I was driving north on my return and the sun was no longer a problem. On the right is Lower Trail Lake and the railroad trestle across Trail River. Straight ahead is Trail River bridge with its 20 mph speed limit. The reason for these reduced speed limits is quite simple—the wooden pilings under the bridges are rotting away and making the bridges very unsafe. In a move designed to lessen the pounding stress on the bridges until they can be repaired, the state has restricted speeds on these three bridges. Further, heavy trucks are restricted to night-time travel only, though I’m not sure how that’s supposed to help save the bridges.

I did notice, however, that a temporary weigh station was open at Mile 13 in a pull-off beside the highway. With no equipment set up to weigh vehicles, it was apparent that the lone State Trooper on duty was there only to enforce the nighttime truck travel. It also appeared he’d already “busted” a truck carrying a line of well-known tools, as it was parked in the pull-off. For those of you who don't understand the paucity of roads in Alaska, it's quite simple: this is the ONLY road into and out of Seward.

All of this seems a bit extreme to me, but I suspect it’s really meant to limit the state’s liability in the event of bridge disaster. Two of the bridges cross what are essentially shallow creeks. But the one over Trail River is another situation entirely. Better slow than sorry, I reckon, and my imagination led me to thoughts of liability risk management. And, those thoughts led me to the Nina, one of the ships that sailed to the New World with Christoper Columbus and the Pinta and the Santa Maria.

More on that tomorrow. My muse works in mysterious ways.
Posted by Gullible at 4:29 PM