I smiled when I read the obituary, and smiled even more when I read he had lived to the age of eighty-two. Good on ya, I thought. Good on ya. Then the memories crashed in with all the force of a tsunami, and I was swept back to 1961.

He wasn’t a friend, or even an acquaintance, and we’ve never spoken with each other. The first and only time I ever saw him he was pointing in my direction because the prosecuting attorney had just asked him to identify who had tried to kill him. Fortunately for me, his accusing finger was aimed the two young men sitting at the defense table just in front of me. I was there as a reporter covering the preliminary hearing of the two accused men. Out of respect for his grieving family, I will refer to him as Mr. C. 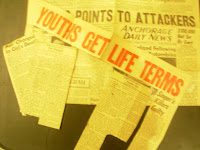 In the way of small towns and sparsely populated states, lives sometimes intertwine in peculiar ways, and so it is in this case. I knew one of the defendants. We had attended the same grade school together, though he was a couple years older than me. I knew him only well enough to recognize him on sight, and to know his reputation.

I was in third grade, sitting on the school bus after school, when the kids in front began whispering a warning. Then, he climbed on, all toughness and swagger, bullying the other kids as he made his way down the narrow aisle of the bus. I looked out the window, afraid to make eye contact, when he came close to me. I was surprised to see him on the bus as he wasn’t known to attend school much, and I’d never seen him on the bus before. But years later, as I sat in that courtroom, I wasn't surprised to find him there, accused of multiple felonies, including first degree murder.

The two defendants, whom I shall call Defendant A—the one I knew—and Defendant B, had robbed Mr. C’s cocktail lounge in the early morning hours just before closing time. After complaining about the small amount of cash in the register, they pushed Mr. C into a back room and shot him in the back of the neck. Mr. C testified that he must have lost consciousness and came to after one of the men hit him over the head with a full bottle of whiskey. Next to him lay the body of a young woman singer who had been in the lounge talking with Mr. C.

One of the men had a cord and was attempting to strangle him, he said, but the cord was in his mouth and he was biting it. He struggled to his feet, and glared at his attackers. He was knocked down and shot in the back of the head. The two robbers left with about $250. Mr. C. again stood and called the police. Thirty days later, in an Anchorage courtroom, he pointed at the two defendants and identified them as his attackers.

Another month passed. In a plea deal, the two men pleaded guilty to second degree murder, assault with intent to kill, and armed robbery. They received life sentences.

Thirty years later, I met Defendant A’s brother. We live in different towns and seldom see each other, but I still count him as a friend. From him I learned that his brother was out of prison and staying out of trouble. I was glad to hear that he'd paid his debt to society and staying out of trouble, but I can’t forget the fear that permeated a yellow and black school bus one day when I was nine years old. Nor can I forget a young woman who died, and Mr. C’s horrendous ordeal.

The story I wrote of the court hearing that day was printed under a banner headline on the front page with my byline. The next year I was awarded honorable mention for best news story by the Alaska Press Club. In another curious twist, the paper I worked for was boycotting the press club for reasons unknown to me, and had submitted no entries on behalf of its staff. My story was submitted, again unknown to me, by a freelance writer whom I knew slightly. Because of that, I was the only one from my paper who received an award that year.

As for Mr. C, he continued in the bar business, eventually owning one himself. In another of those odd small-town twists, I learned from his obituary that he first came to Alaska in 1952, about the same time a young delinquent was terrorizing a school bus I was sitting on.

According to family members, Mr. C was a kind and thoughtful man. I’ve been wondering all day if he’d lived his life with that extra joy, that special appreciation that sometimes comes to those who have been spared, because, really, he should have died forty-seven years ago.

The answer was in his obituary: his favorite sayings were, “Everything is beautiful,” and “Pay attention.” No doubt about that answer.
Posted by Gullible at 11:27 PM