Late one night, in a land far, far above the forty-ninth parallel, and very close to where Santa Claus lives, a single snowflake fell from a cloud. It drifted for a long time through very cold air, missed an airplane flying through its path, avoided an all-too-warm invitation from a rooftop chimney, and settled safely to the ground in someone’s front yard.

The Littlest Snowflake didn’t know whose front yard it had landed in, and really didn’t have much time to think about it, because a whole bunch of his siblings and cousins were falling around and on top of him. Soon, enough of them had joined the Littlest Snowflake that the entire neighborhood was two feet deep in new-fallen snow. They spent the rest of the dark night visiting with each other, catching up on gossip and news, drifting into the open arch of a dog house, taking turns covering up and sliding off the slippery orange plastic wrapper of a newspaper, and in general having all kinds of fun that you would never guess snowflakes had at night. Some of the snowflakes that had landed on the branches of a birch tree jumped onto a trampoline that had been left outside. They bounced and bounced and had a wonderful time.

Just as light began to draw an outline along the Chugach mountain peaks to the east, the Littlest Snowflake heard a loud noise at the end of the street. Around the corner came a huge, noisy truck with yellow flashing lights and a curved blade on its front. The wicked-looking blade was snatching all the snowflakes that were still playing in the street. At first the Littlest Snowflake was afraid, but then he heard all the snowflakes in the street giggling and laughing as the truck scooped them up and swirled them around in the big shiny gray blade.

Hundreds and hundreds of snowflakes laughed until their sides hurt as they came spilling out the small end of the snowplow blade. When they rolled out onto the sidewalk, they all stuck together in big, round balls, as snowflakes will do. One of the round balls rolled past the Littlest Snowflake, and he jumped on, hanging on tightly as the ball rolled several feet and came to a stop.

After the big truck left, the snowflakes began to settle down to sleep for the day. Just after the snowflakes fell asleep, a loud bang woke them up as five children rushed from the door of a nearby house. Immediately the children gathered up buckets and shovels and even an old wheelbarrow and began to gather up the snowflakes. They loaded bucket after bucket with snow, carried the buckets to the front of the yard, and dumped the snowflakes in a pile that grew higher and higher.

All day long the children worked piling the snow. Finally, the light began to fade and the tired, hungry children went inside their house for the night.

The Littlest Snowflake watched all this activity from the far corner of the yard. He hoped the children would come and get the ball of snow he was riding on, and add it to the big pile on the other side of the yard. That looked like fun, he thought, and he began to imagine all that he could see from the top of that mound of snow.

Early the next morning, again right after the Littlest Snowflake had fallen asleep, another bang jolted him awake. The children ran out the door and headed for their buckets and shovels. This time, though, they were joined by their father, because the mound of snow was getting too high for the smallest children to empty their buckets. They all filled their buckets and ran to the mound.

“What’s that, dad?” asked the first child. There, stuck to the big ball of snow was a piece of paper. The father grabbed the paper and read it.

“Well, kids,” he said, “It’s from the city. It says the snowman is a public nuisance and a safety hazard. This is an order to cease building our snowman.” The children all dropped their buckets and hung their head in sadness, because they had been building giant snowmen for several years. It made them happy, and folks came from all over town to take pictures of the snowmen. It made everybody happy. They all trudged back into their house, to spend the day sitting on the couch watching television.

The hours passed and the light left the yard where the big pile of snow sat forlornly incomplete. All the snowflakes were sad and felt very sorry for the disappointed children.

Several days passed, and then sometime during the night, when it was very, very dark, the Littlest Snowflake felt his ball of snow rising from its resting place and moving. It was too dark to see, but from all the whispers, the Littlest Snowflake soon understood what was happening. He felt gentle pressure patting and packing the snowflakes closer together. The snowflakes right beneath him were moved aside and a long, dark shape appeared in their place. From somewhere not too far away, he recognized some of his cousins’ voices saying, “Aaaaaaahhh. That feels nice…” He felt something soft and fuzzy brush against him, then fall away. 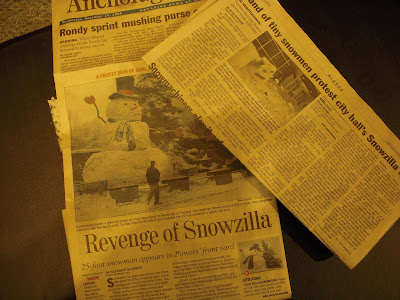 He looked down and saw that he was resting on a bright orange thing sticking out of the snowball. Right beneath that was a corncob pipe. Farther down was a multi-colored scarf tied below his snowball, and two huge snowballs beneath that. A big thick tree branch stuck out from either side of the middle snowball, and bright red gloves were on the end of each branch.

The Littlest Snowflake looked up and saw two black buckets stuck in his ball of snow, and a big black stovepipe hat on the very top. "Wow," he cried. "I'm King of the World!" 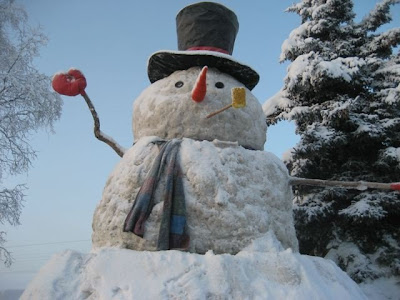 Soon people began to gather and take pictures of the giant snowman. The father came out of the house to see what all the fuss was about.

“Did you stay up all night to build Snowzilla?” asked one man.

“I don’t know how it got here,” answered the father with wonder on his face. All the children in the neighborhood came to marvel at the giant snowman.

“Yes, it is. It looks to be about twenty-five feet high,” said Mr. Powers.

“Did you hear about the protest at City Hall?” Mr. Powers said he hadn’t and the man told him that a dozen three-foot-high snowmen were picketing the front of entrance of City Hall. He said they were carrying signs that read “Snowmen have rights” and “Heck no, we won’t go” and “Snowzilla needs a bailout.”

Snowzilla’s picture was on the front page of the newspaper above the banner headline: "Revenge of Snowzilla.” On the editorial page were dozens of letters chastising the city for trying to stop the building of Snowzilla. From his perch atop the carrot nose (he’d finally learned what it was he was resting on), the Littlest Snowflake looked down and felt happy. He was proud to be a small part of this snowman that brought smiles to the faces of children and adults. 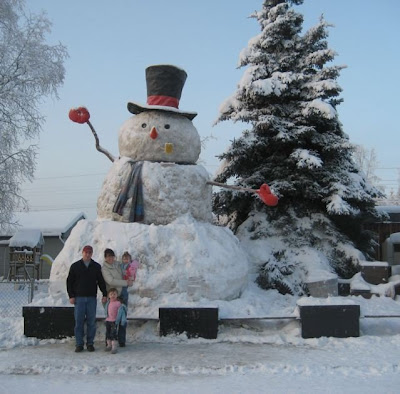 All day long people asked Mr. Powers how he had managed to build Snowzilla in one night, because the preceding Snowzillas had taken weeks. Mr. Powers said he didn’t know how Snowzilla had been built so quickly. Again and again he answered their questions, denying any knowledge of how it happened.

Finally, weary of the questions from visitors and reporters, Mr. Powers smiled and told them the truth: “Well, as near as I can tell," said Mr. Powers, "There must have been some magic in that old top hat of his…”