The "Birds" of Halibut Cove

Jay pulls the bridge control to reverse and the powerful 8V-71 Detroit Diesel engine heaves the square stern into the ice. The “Stormbird” is underway. Three hours before, the green and white steel-hulled vessel had bullied its way into the Homer small boat harbor, breaking ice before it as it motored towards its tie-up spot at the bottom of Ramp One. Now, beginning its return voyage across Kachemak Bay to Halibut Cove, it once again has to break up the chunks and floes of ice that have refrozen into a solid sheet several inches thick in the calm water of the harbor. Unable to pivot because of the ice, Jay backs the sixty-eight foot vessel between the rows of slips where pleasure and work boats are tied. Once in a major traffic lane, the Stormbird is able to turn and head for the open water beyond the mouth of the breakwater. 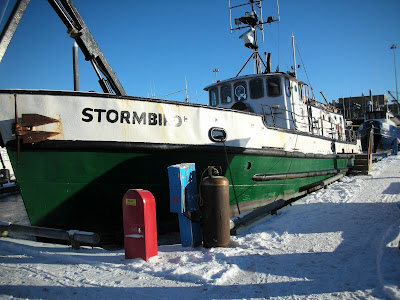 The Stormbird, intrepid connection to Halibut Cove. “This is soft ice,” says Jay, referring to the floating mass of ice that chokes the harbor exit. “I like this ice.” The “vee” prow of the boat pushes aside the soft ice as the Stormbird leaves the harbor. Both tidal and wave actions keep these ice floes floating free of each other today, though there have been days when the Stormbird has to fight its way through a solid mass of ice, reversing and ramming forward a few feet again and again. 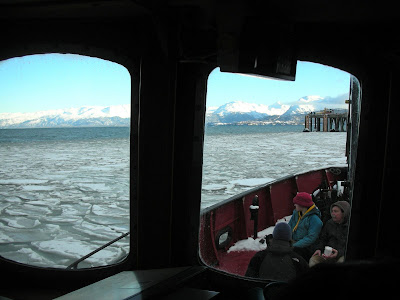 "Soft" ice at the entrance to the Homer Small Boat Harbor. On the lee side of the rocky breakwater that protects the harbor from almost constant northeasterly winds, scores of bald eagles watch the progress of the boat. More eagles perch on masts, handrails, light stanchions, rooftops, pickup truck beds, and the lighthouse of the Salty Dawg Saloon. An eddy of eagles circles a couple hundred yards away on the western side of the Homer Spit, a gravel bar that divides Cook Inlet from Kachemak Bay. The dozens of soaring birds wait for Jean Keene to appear with their daily rations. Jean feeds the eagles of Homer for so many years that she is an institution here. 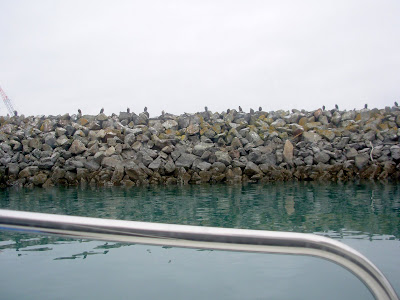 The eagle welcoming committee on the breakwater in Homer.

Her funky waterside dwelling, driftwood décor and reputation as The Eagle Lady draws photographers and tourists to this town that proudly promotes itself as “the end of the road.” She was granted special dispensation to continue feeding the eagles as long as she lived, as normally such feeding activity is not allowed under law. (Update: Sadly, Jean died earlier this year, and her assistant was allowed to feed fish scraps to the eagles until the end of March. Now, the eagles must fend for themselves.) 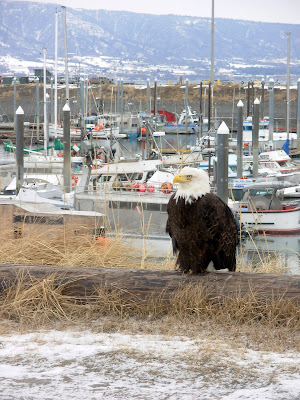 A bald eagle keeping an eye on the Homer Small Boat Harbor...and everything else.

Across the water to the west, beyond the mouth of Cook Inlet, Mt. Augustine pokes its conical shape above the horizon. Eighty miles distant, it is the first of four active volcanoes that punctuate the western mountainous edge of Cook Inlet The bay is in a good mood today, not dead calm, but without white caps, large swells, or floating chunks of ice. Only two waves break on the bow, sprinkling the passengers riding on the foredeck in the sunshine for the five nautical mile trip to the cove. The boat is licensed to carry fifty passengers. Most of the passengers are residents of Halibut Cove and are so familiar with the Stormbird that they help out wherever needed. They buy annual passes on this boat that is their lifeline to the mainland and the highway system with its access to groceries, supplies, health care, transportation, and the sundry necessities and conveniences of modern life. Taking the mailboat to town is a social event in the cove, a time to make plans for get-togethers and catch up on how everyone’s doing. Several passengers ride in the bridge cabin with Jay. More are in the aft cabin, sampling the pastry that Lucinda supplies every Tuesday. Today it’s oatmeal bars. Last week it was oatmeal cake, and before that oatmeal cookies. Oatmeal, she says, helps settle the stomach and prevent seasickness. Forty-five minutes after departing the harbor, the Stormbird slips into Halibut Cove alongside an isthmus that forms a natural breakwater. Jay turns the wheel to port and eases the Stormbird to the long wooden dock. 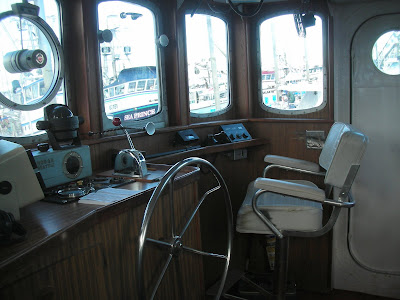 Bridge of the Stormbird.
Passengers begin unloading their luggage, groceries, building supplies, fuel cans and tanks. Also unloaded is the U.S. mail, the primary reason the Stormbird sails every Tuesday and Saturday. Alongside the steel ladder that provides access to the bridge is a U.S. Postal Service emblem with its familiar red, white and blue colors and stylized image of a bald eagle. Cartons and bags and boxes are placed in the ubiquitous plastic fish totes seen everywhere in Halibut Cove. 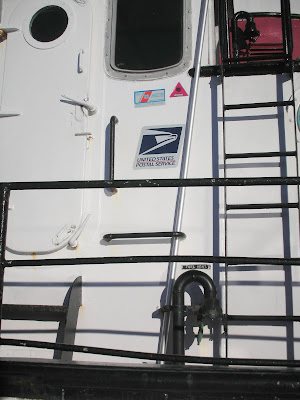 The USPS emblem on the side of the Stormbird.
Kay, the contract postmaster for the cove, grabs the rope on one tote and pulls it over the snow-covered dock to the floating post office. By this time almost all of the passengers have disappeared, either dragging their own totes to their homes, or loading them into skiffs for transport to other areas of the cove accessible only by water. Though the two dozen full-time winter residents of the cove receive mail only twice a week, there is no stampede to their mailboxes. They will return later in the afternoon, after Kay has had time to sort the incoming mail. 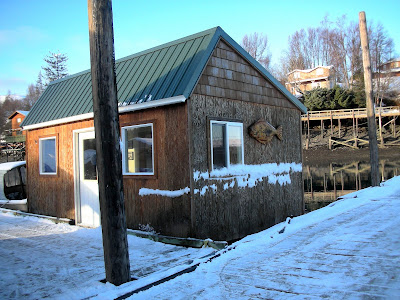 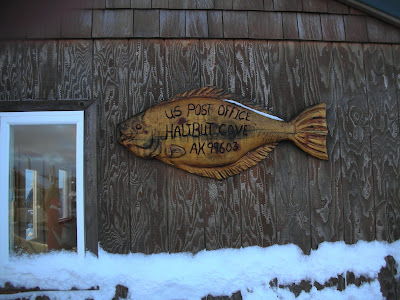 The floating post office and its sign.
In these last days of January the sun is climbing higher in the sky, clearing more mountain ridges each day and bringing more minutes and hours of sunlight to the snow-mantled cove. Comparing the increasing numbers of minutes with others in the cove is a popular pastime. They relish these lengthening minutes, looking forward to the long days of summer when it never gets dark though the sun slips behind the mountains to the west. Along with that longing, though, is the knowledge that those long days mean tourists, more boats and floatplanes. During the summer months the number of residents swells to seventy-five plus weekenders. Tourists visit the cove daily, eat at The Saltry, stay at the several lodges, attend creative workshops at Stillpoint, and get their caffeine fix at the floating espresso stand. Fishing, hiking, kayaking, or just leaning back and relaxing draw many. Craftsmen of all types live in the cove—woodworkers, writers, artists in all media, including octopus ink. For some that increased activity is their lifeblood—the commerce it brings to the cove. For others, it’s days of frenzied activity that they enjoy, while at the same time looking forward to the tranquility of winter. 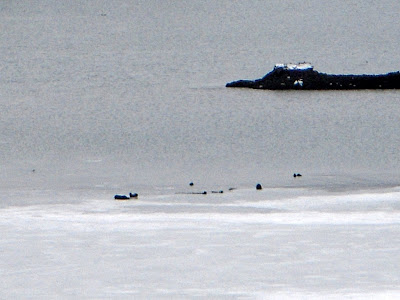 Otters playing and eating at the edge of an ice pan.
For now, the final days of January, the cove is quiet. The Stormbird is at rest, tied securely to the dock . Sea otters float on their backs noshing on mussels and clams, nudging their sleeping, floating pups with their heads. Sea birds and ducks paddle about, leaving gentle wakes behind them. In the spruce trees, on rocks jutting above the landscape, or circling on updrafts, large black birds with white heads and tails keep eagle eyes on Halibut Cove and all its inhabitants. 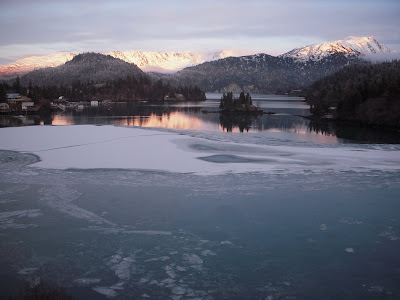 The cove at rest.
Posted by Gullible at 6:57 AM
Email ThisBlogThis!Share to TwitterShare to FacebookShare to Pinterest