In Which We Search for Rhinos

'But African time was not the same as American time… As African time passed; I surmised that the pace of Western countries was insane, that the speed of modern technology accomplished nothing, and that because Africa was going its own way at its own pace for its own reasons, it was a refuge and a resting place.' - Paul Edward Theroux, an American travel writer and novelist.

The guards opened the gates of Rhino Watch Lodge and we drove up the driveway to the small parking area.   We were just in time for lunch.
This lodge is operated as a hotel even though they had both hotel rooms and tents.   Our group had reserved tents and and they were spaced far enough apart as to be almost private.
Laura's tent even had sofas and as she described the furnishings we  decided she was in the special tent suite and thereafter ensued a long-lived joke about Laura "having everything."
Unfortunately, I never did get a photo of Laura's tent. 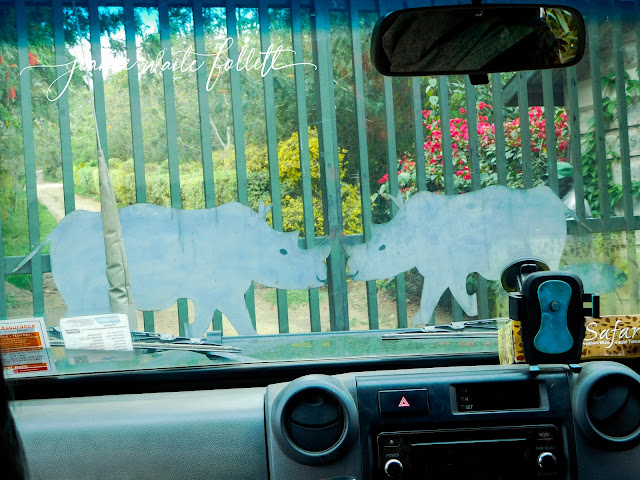 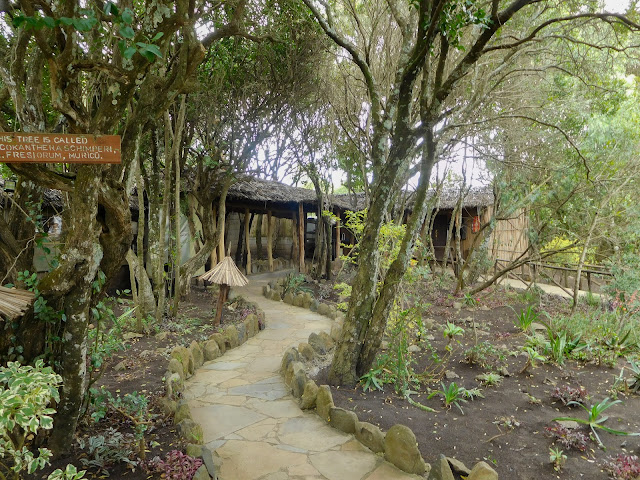 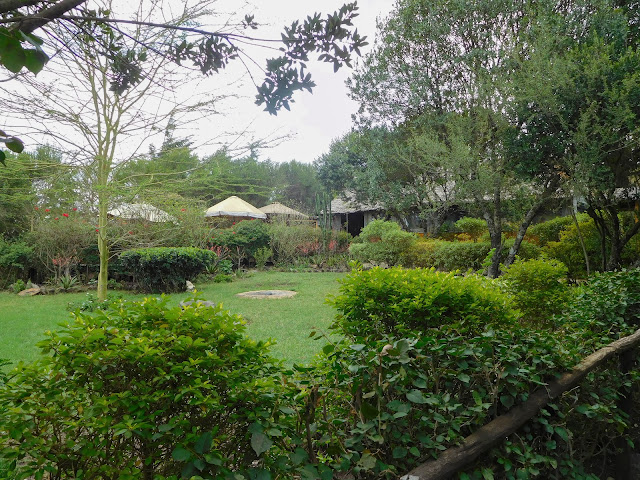 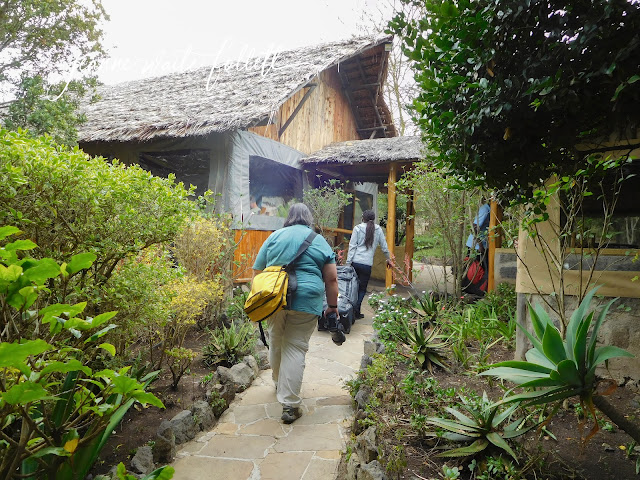 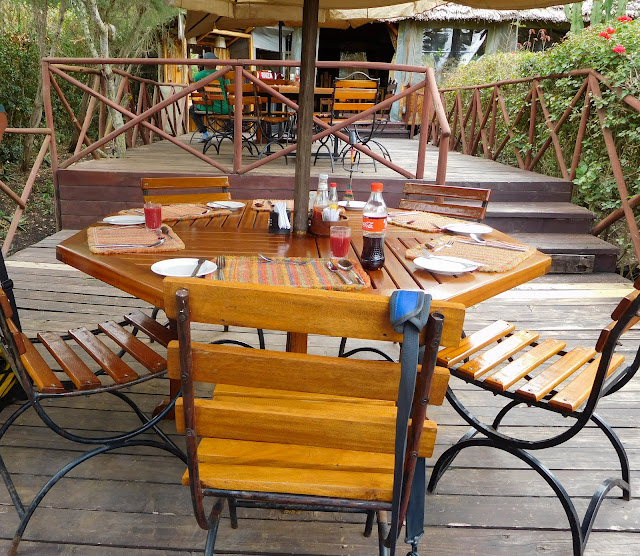 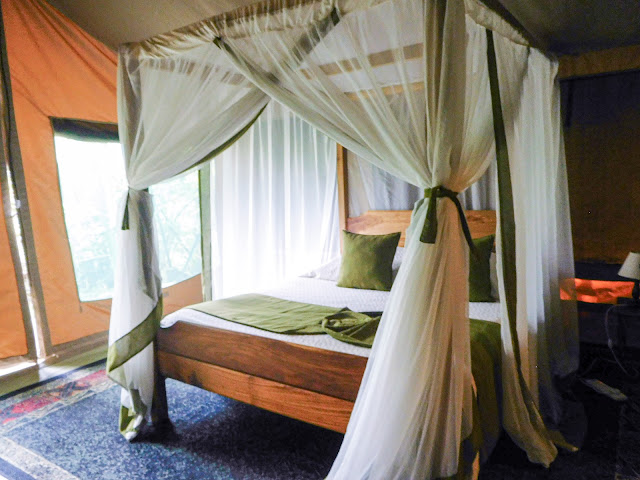 We had time after lunch to settle in, download the morning's photos from Samburu, and make certain all the camera batteries were charged.   Then, around four o'clock, we loaded up and drove five minutes  down the road to Solio Ranch and the rhinoceros reserve.

Solio Game Reserve is a fenced, privately-owned conservation area geared toward protecting both black and white rhinos.    The reserve was begun in 1970 when Courtland Parfet, owner of Solio cattle ranch, fenced off a large portion of the property so that indigenous animals could roam in their natural habitat.

The forerunner of today's Kenya Wildlife Service approached Parfet about taking in five black rhinos  and thus rhinos became part of the reserve.   More and more black rhinos were taken in and eventually, Solio became the source  of rhinos for many other reserves that were sufficiently secure to protect the animals from poaching.

The reserve has faced many challenges over the years including drought, fire, and refugee settlement.

During our three-night stay at Rhino Watch Lodge, traveling into the Solio reserve twice a day, we saw only one vehicle within the reserve plus ranger trucks.    It is well off the tourist trail and thus provides great bird animal sightings. 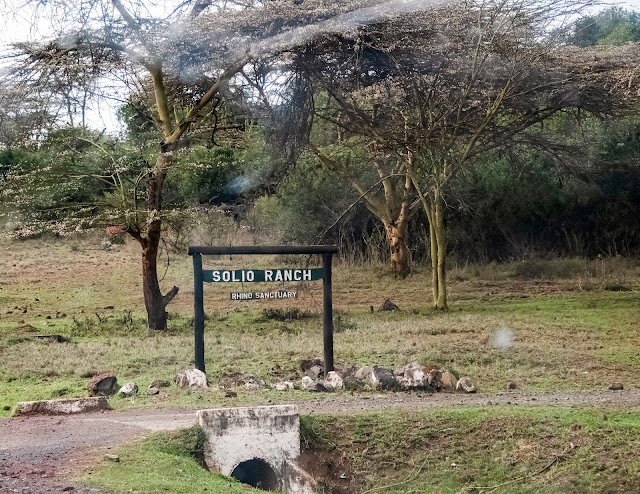 The splotches on the photo are rain drops. 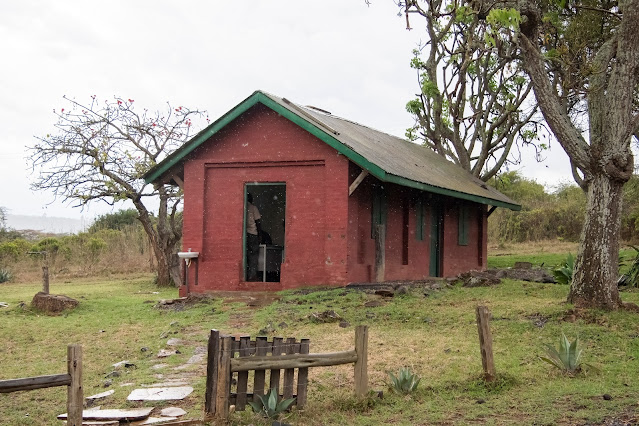 This is where our guides went to take care of whatever paperwork was required, but why it took so long is beyond me.
Below is one of the ranch buildings. 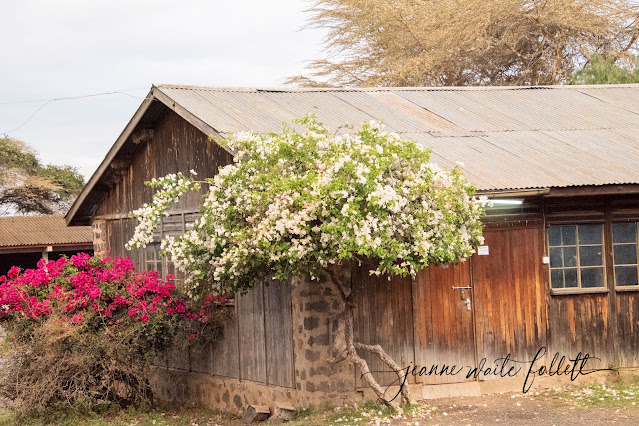 We saw a number of DeFassa waterbuck in the reserve. 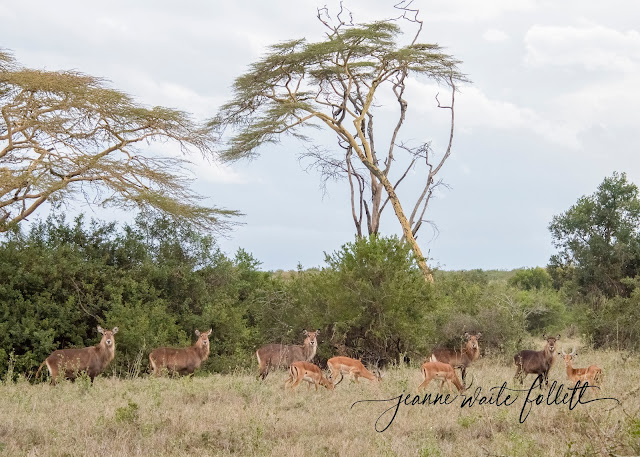 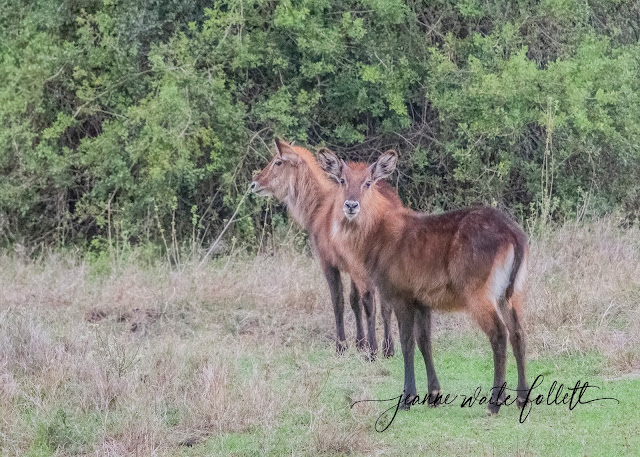 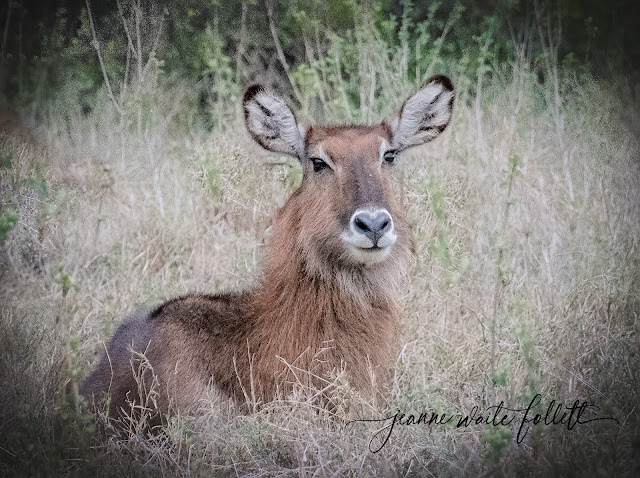 When we first saw the three rhinos in the photos below, they were pushing each other around.   As soon as we stopped to take photos, they were suddenly best friends. 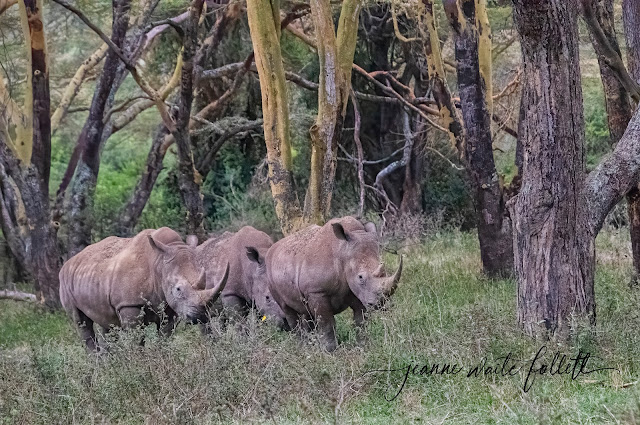 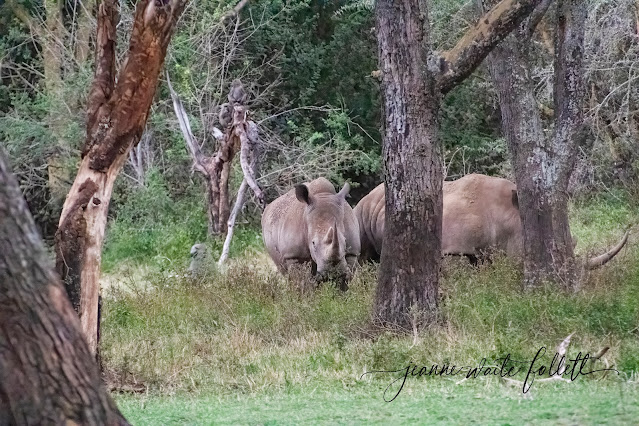 I was taking a photo of this black-shouldered kite perched on a branch when it suddenly leapt into flight and I got this! 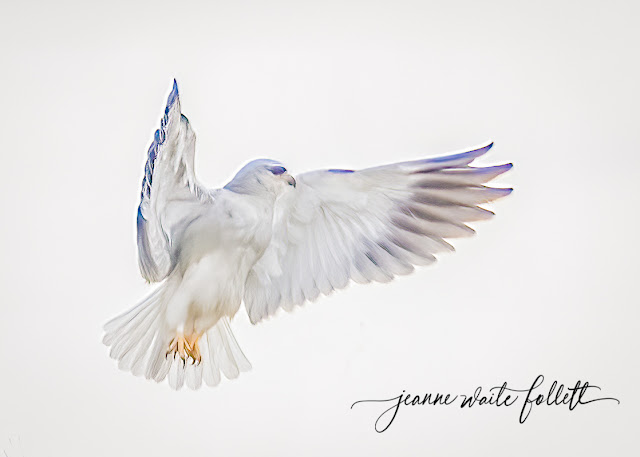 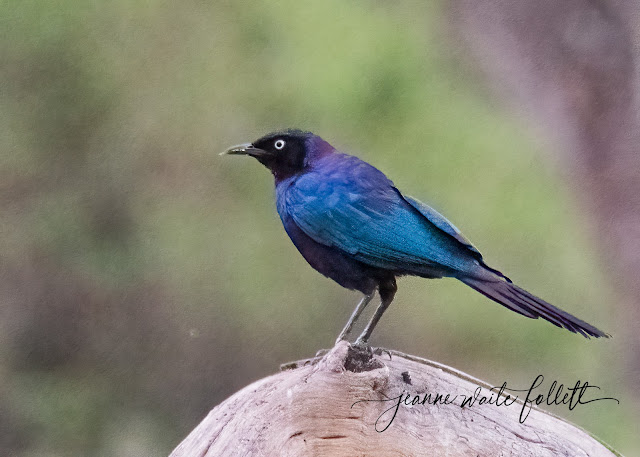 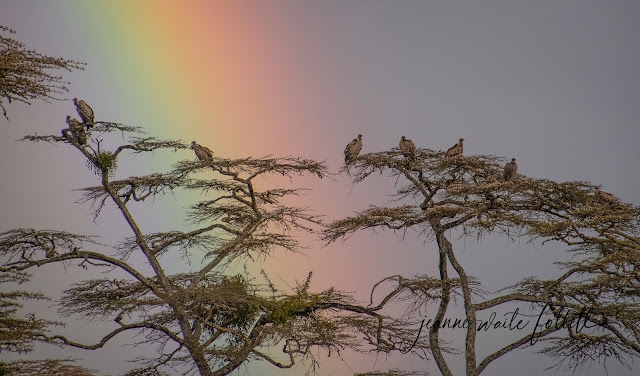 Rainbow  with vultures.
Eventually, we came out of the forest and into a large grassland area and it was there that we saw several rhinos. 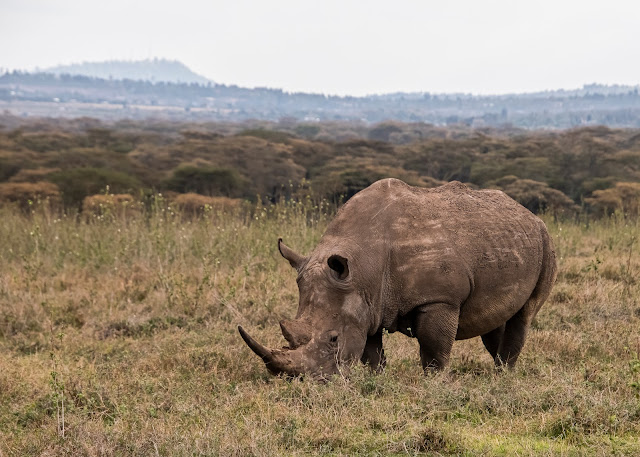 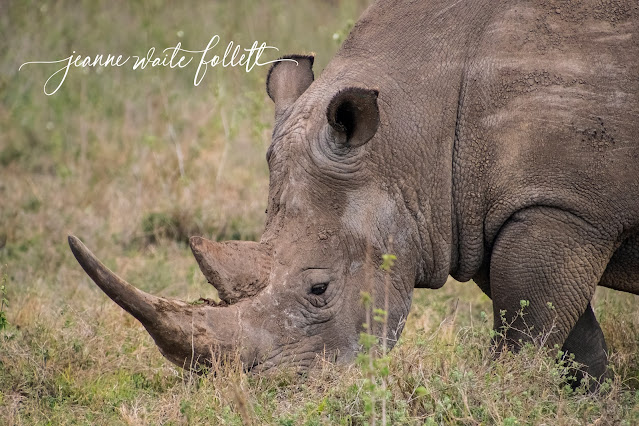 By the end of our short afternoon drive, we has seen 11 rhinos--all of them white rhinos.
We had to be out of the reserve by 6 PM, before they lock the gates..   Here's a photo of one of our vehicles at the gate.  We are right behind him.   Time 6:03. 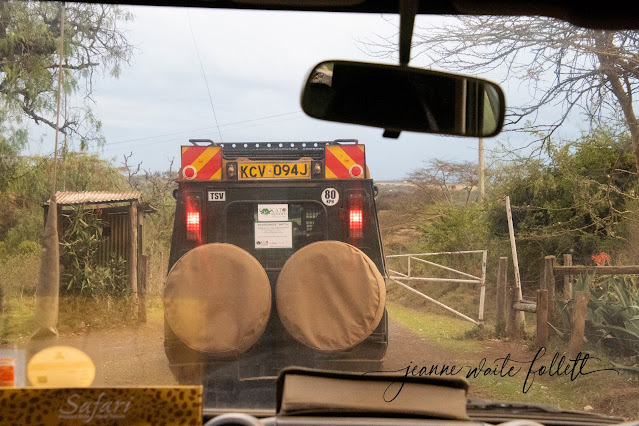 Next:    Where are the black rhinos?
Posted by Gullible at 12:13 PM
Email ThisBlogThis!Share to TwitterShare to FacebookShare to Pinterest
Labels: Africa 2021, rhinos, Solio Game Reserve