Coming out of hibernation....

Today, for the first time since winter plopped down on us impertinently early last October, I think there's a chance that breakup's coming. For those of you who don't live in Alaska, and have no idea what "breakup" means, it's that time of year when winter begins to ebb and the land comes out of hibernation.


Lakes, creeks and rivers thaw--their ice breaks up. People come out of their houses for megadoses of Vitamin D directly from the sun, rather than those little white capsules in a brown bottle from Costco that our doctors tell us all Alaskans need. Ice fishermen chase Dolly Varden and Rainbow trout. Hikers, joggers and walkers are everywhere.


And the bears start to stir in their winter dens. A week ago in Anchorge, a man was treed by an early rising black bear boar, who has since signed his own death warrant by chasing other people and getting into garbage wherever he finds it. He'll be a goner as soon as the fur and feathers guys spot him.

I was the substitute mail carrier today, taking the mail from the Moose Pass post office to the Hope post office, picking up their out-going mail, delivering mail through Cooper Landing, and then returning to Moose Pass with all the out-going mail. Along the way, the signs of the times were sprouting alongside the highway.

The sign below warns of icy conditions through the Silvertip area. This is mostly due to melting snow running across the highway into shady areas, and refreezing. All the gray below comes from two sources: the crushed gravel that's full of glacial silt used to sand the highway, and a recent dusting of volcanic ash from the erupting Mt. Redoubt. 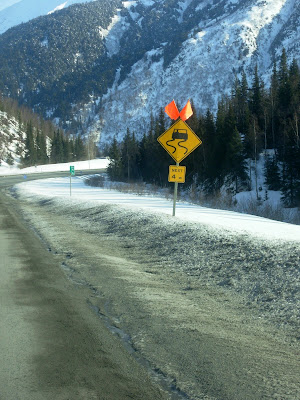 This sign warns of frost heaves ahead. Really, I think one sign each at the beginning and end of the highway should be sufficient. By June many of the bumps will have subsided, but right now it's like riding a roller coaster out there, particularly in places where there are underground springs and naturally occuring wet conditions with poor drainage. 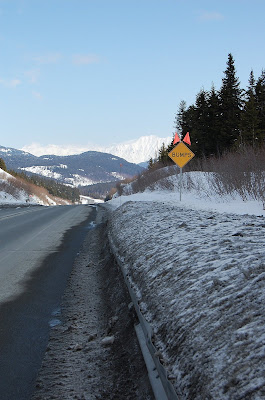 Before I left on my route this morning, I took this picture from my back deck. The large white triangular areas near timberline are avalanche fans. 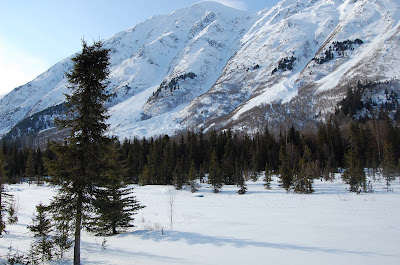 Here, in close up, are those avalanches. The patterns and contours of the snow fascinate me. I couldn't give you a scientific reason why the snow stops in such an uneven finish, but I have a theory that has much to do with resistance and the bullying effects of still moving heavy snow above that resistance. The exposed terrain has no such contours.


Those ridges and valleys in the slide are quite tall and dramatic, but I'm not going to go over there and measure them for you. This is the perfect time of year to wind up under new ones. Just take my word for it that they're much taller than I am. 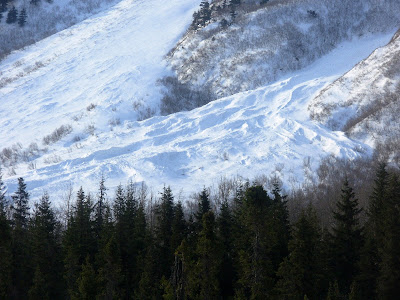 Here's another slide just off the Hope road. 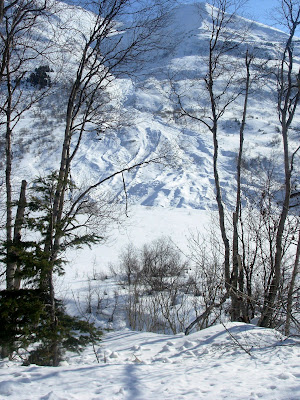 And another. Most slides that appear like this seem to be from heavy snow, rather than the light powder snow that creates a huge fluffy snow cloud in front of it as it plummets down the mountain. This snow moves like wet cement, and its power is deceptive. 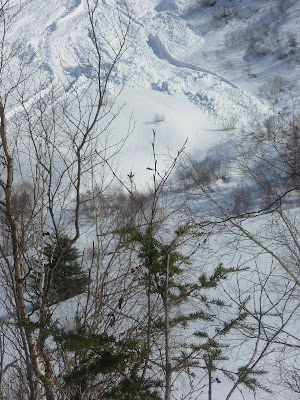 Note the lip that runs along the very top of this mountain. It's called a "cornice." It's created by wind blowing and packing snow into these overhanging dangers. Cornices break off for various reasons, resulting in spectacular snowslides. 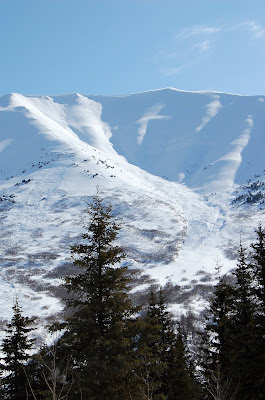 With such a spectacular day, I thought about getting one of the deck chairs from storage and putting it on the back deck. But, also out there is a slight breeze, and that breeze belies the temperature on the thermometer. So, instead of sitting in a green plastic Adirondack chair and adding to the sun spots on my cheeks, I'm in my nice, warm, sun-filled loft telling you that there's hope, hope that winter's grip is softening. I, for one, am ready for it to be gone. I am in great need of summer, and if I have to suffer through mud and slop and avalanches closing the roads and filthy vehicles, well, that's the price we pay.
We pay it because in a couple months we'll forget all about the trials of winter and remember why we live here when we see things like this: 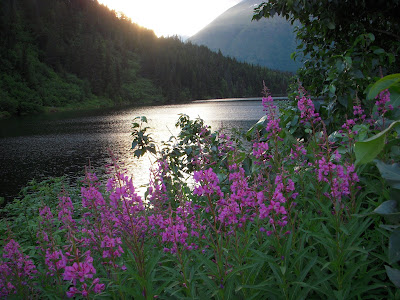 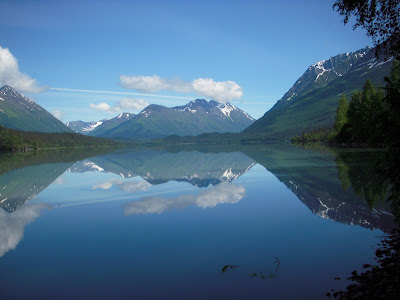 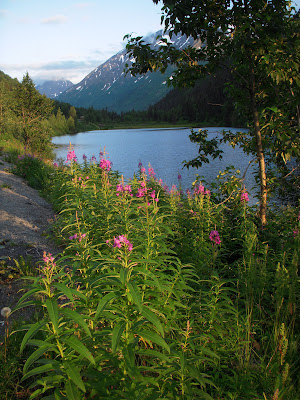 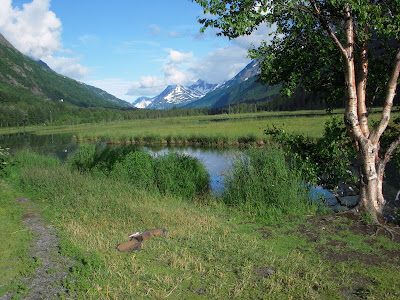