EVERYONE has seen pictures of Easter chicks. Have you ever seen any of Easter Roosters?

Boy, these photos had to have been taken at least twenty-five years ago. The big white handsome Cornish cross rooster, appropriately named Rooster, was my buddy. He would come to the door and cluck until I came out to pet him. He followed me everywhere, like a dog. Speaking of which, the cat and all the sled dogs left him alone. 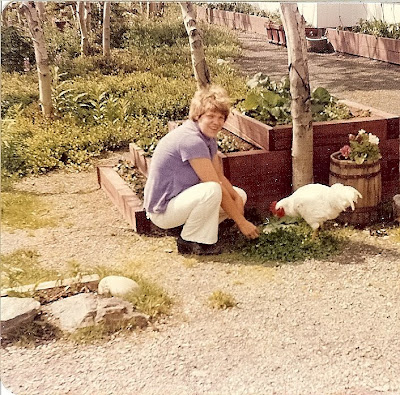 His shadow was Sidekick, colored like a Rhode Island Red but with a rose comb. Sidekick didn't want anything to do with petting. He just wanted Rooster gone so he could have all the hens to himself. Rooster died an accidental death one winter after choking on a tomato core. Afterwards, Sidekick became mean and frequently attacked me when I went to feed and water in the coop. 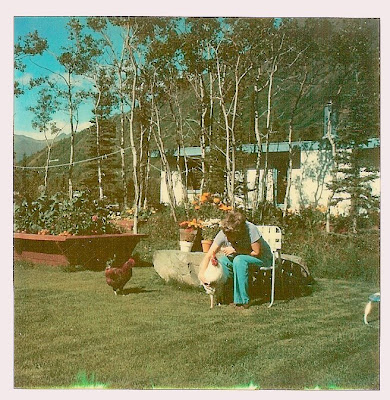 "Hit him with the back of your hand," advised my husband after another attack. I did. Before I could get my hand back, Sidekick had hit me in the neck. I hit him again, and instantly Sidekick was sitting on my shoulder. I gave up, and found Sidekick another home.

And those little spruce trees in the picture? Here's what they look like now. The house in the background is now gone. 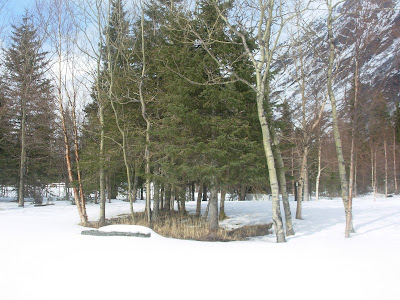 When we first moved here in 1977, I could decorate those spruce with one string of Christmas lights each.
Posted by Gullible at 2:57 PM