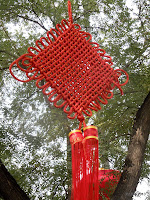 You have one chance, the expression goes, to make a first impression.

That's not always correct, now that I consider how many times I've had to change my mind about people and places.

As for China, I'm not sure what I thought before I got there. Maybe pastoral scenes of slender, gowned women with dainty trees and small ponds painted on silk. Or, did I have that mixed up with Japan?

Okay, China. Women in black clothing and coolie hats, up to their knees in rice paddies, bent over at the waist, working away. (Is "coolie hats" politically incorrect these days. It's so hard to keep track of those things anymore.)

Anyway, when I got off the Boeing 747 after an eleven hour flight from San Francisco, this is what I saw: 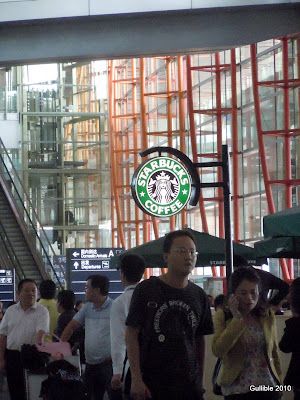 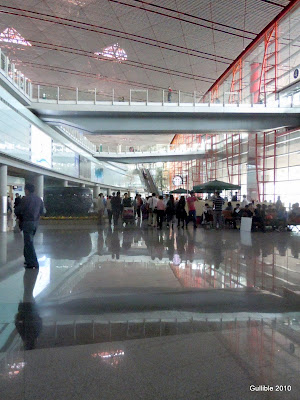 ...a shining, spotless, ultra-modern, soaring terminal, soon to be jammed with people disembarking three other flights, and all of us lining up at the few desks open for immigration and passport control. Lines and lines and lines of people.

And then part of the exterior as we exited the terminal by electric train that took us under active runways to a baggage area: 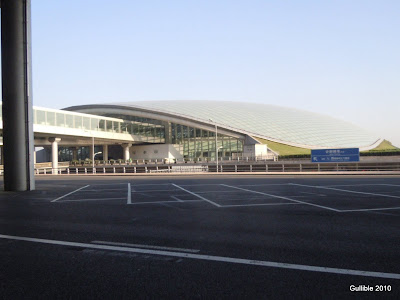 Soon we sheep were gathered by our tour guide, Hui. Her real given name is Xianghui, or Hui for short. Pronounced like "whey." 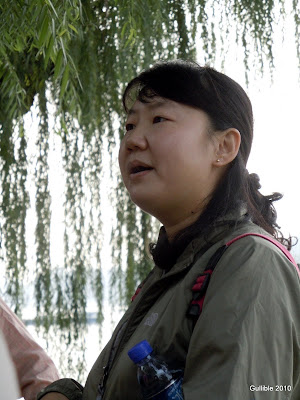 Once she'd rounded up her flock--there was a long wait for one passenger whose luggage hadn't arrived---we boarded a coach for a long trip into downtown Beijing. It was here that my ever-lasting impression of China took hold--endless traffic and smog-shrouded skies. Smog from coal-burning everything, smog so thick that sometimes visibility was a half-mile. Everywhere we went in China, the same thick smog. 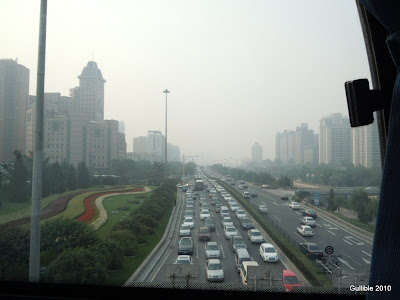 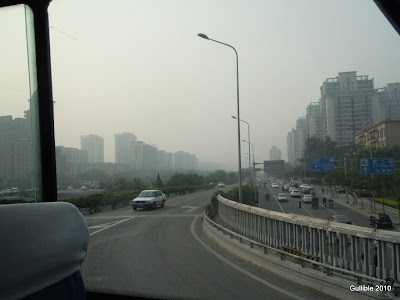 Finally, in late afternoon, we arrived at the Qianmen Jianguo Hotel. 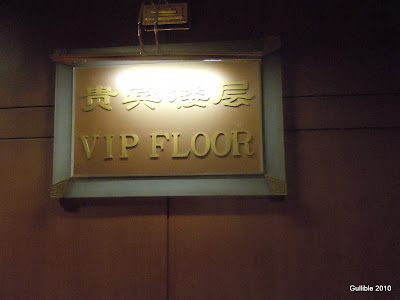 At first, I was impressed. It was a couple days later I found out EVERY floor had the same sign. 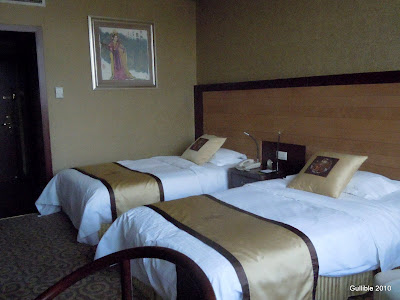 Look comfy? Nice room, very nice room. After all, this was a four star hotel. Unfortunately, the Chinese sleep on concrete slabs and use rocks for pillows. You don't know what a "firm" mattress is until you've been to China. And those pillows? Each one was filled with buckwheat hulls and weighed fifty lbs. 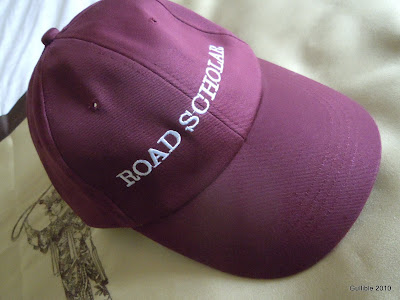 Ah, the flock brand. Made it easier for the shepherd to find us.

Just for the heck of it, I photo'ed the room service menu. The exchange rate was 16 yuan for a dollar. I rounded it off at fifteen, which made it a lot easier to figure. So, a hundred yuan was worth $15.

I noticed something on the drive from the airport in Beijing, and was thinking about it when a fellow on the bus said, "I feel like I'm in Moscow." We were passing a bunch of Krushchev apartments at the time. 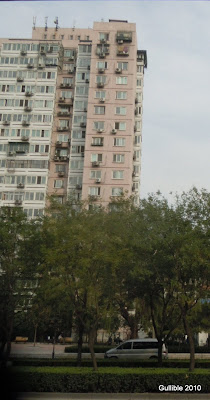 These buildings could have been anywhere in Russia. Simple, utilitarian apartment buildings with open or glass-in balconies. These buildings looked pretty uniform, but in Russia it seemed every apartment owner did something different with their balconies, and that made the exteriors look shabby. 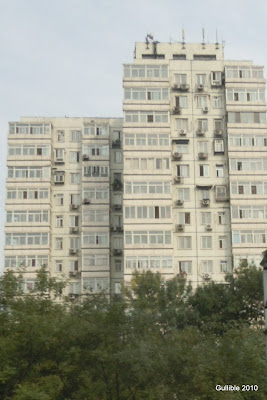 This was cool. I loved walking down this narrow lane, dodging motor bikes and regular bikes. They don't honk until they're right behind you. 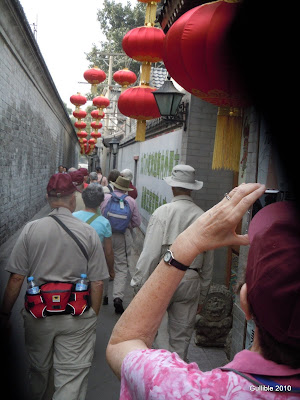 This is where the lane ended. Again, the smog. This is right-out-of-the-camera, with no touch-ups to fix the photo and reduce the smog. 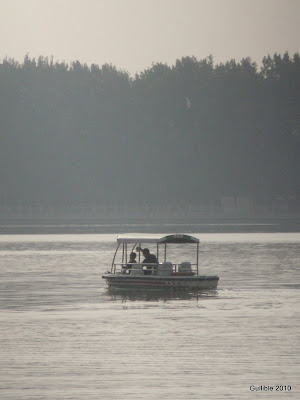 Alongside the lake, I saw this marble bench. 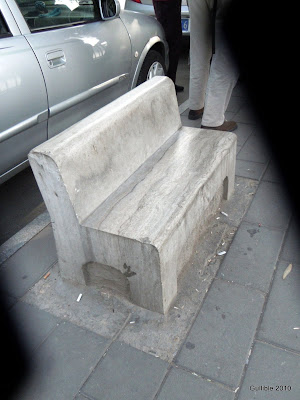 Then I found out what it was for. The owner stood nearby as his pups cooled off on the cool marble. 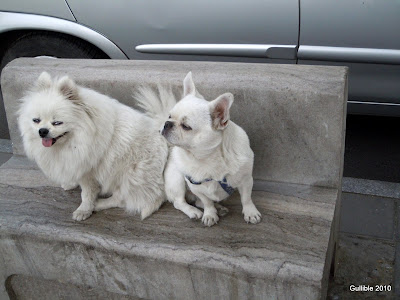 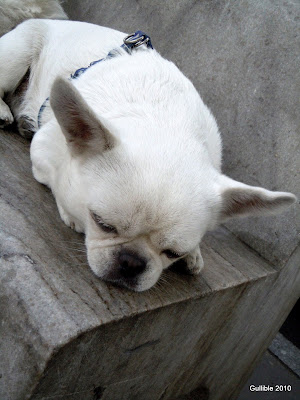 A rickshaw man waited for a fare. 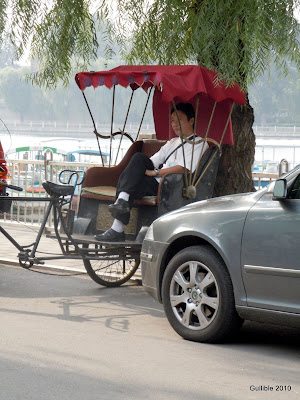 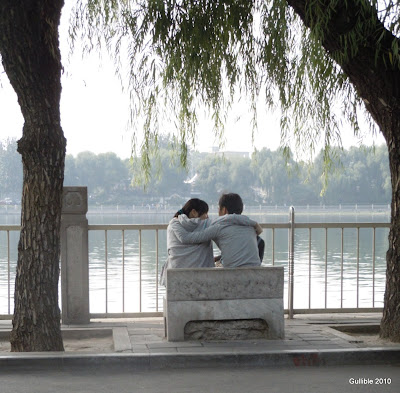 And lovers embraced.
Posted by Gullible at 8:22 PM