(No, you didn't miss Chapter One. I haven't written it yet because Chapter Two was more fun to write. I'll get around to One some day. Right now I'm in Marble Canyon with a Road Scholar group. Marble Canyon is sort of at the head of the Grand Canyon--depends on who you ask.) 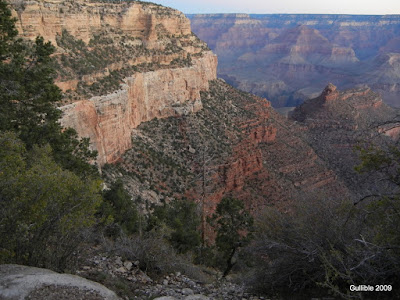 The National Park service has done an admirable job warning about the dangers of heat and dehydration health hazards at the Grand Canyon. In every brochure, in every guide, and everywhere you look, there are lists of symptoms and recommendations to keep you safe.
Drink lots of water and eat salty snacks, they say. Don’t rely solely on sports drinks because they don’t contain enough sodium to keep you hydrated. Take a ten minute break every hour and put your feet up. Eat a salty snack every time you drink water. Hike with sopping wet clothing—the evaporation will help cool you.
As I said, lots and lots of warnings and suggestions about heat in the high desert. 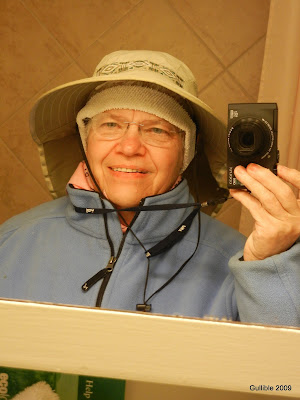 Dressed for cold weather mule riding and who gives a darn about appearances?

I must have missed the one about how freakin’ cold it is at 7 a.m. on a clear late October morning. One brochure DID mention temps down to 34 during the winter, but I think that was a Chamber of Commerce “34,” if you get my meaning. It was so cold, I almost froze my butt off, which, considering what happened, a fine state of posterior numbness would have been mightily appreciated.

For one thing, the sun wasn’t even up yet, so it was barely light enough to find my way from the Bright Angel Lodge a couple hundred yards through a dimly lighted parking area to the mule corral where I was to start a two-day mule ride to the floor of the Canyon, with an overnight at Phantom Ranch. The Park people brag about how dark the nights are and how you can see the stars, hence the stingy, I mean "careful" distribution of sodium vapor night lighting. 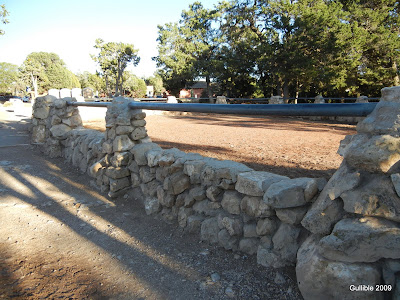 The mule corral the afternoon before. 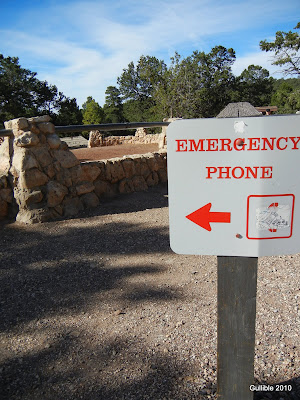 Interesting place for this sign, right before the corral.

Anyway, my room was close enough that I could have smelled large warm-blooded animals and leather as soon as I stepped out the door. If I didn’t have a cold, that is. And if those hybrid beasts of burden had actually been there, of course. I was the only living creature in the area. As usual when that happens, I began to wonder if I was in the wrong place. I’d checked it out the afternoon before, read all the signs and such, so I was pretty sure this was the appointed hour and the anointed (there’s a sly bathroom joke in there, if you know equines) place. 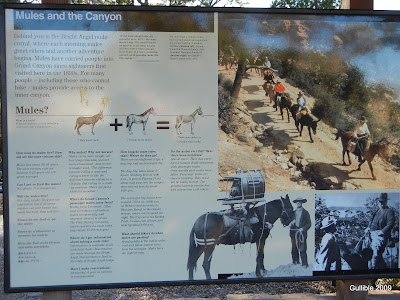 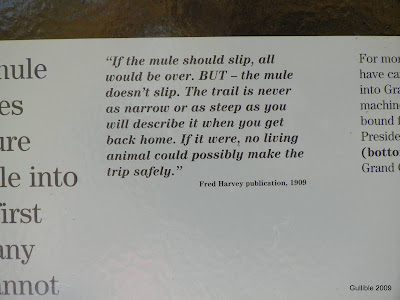 Eventually another couple appeared from the gloom, and just as we’d all agreed this was the right place, a wrangler with a string of saddled beasts materialized. Then another. Pretty soon there were mules and wranglers all over the place.

A denim-clad cowboy with a handle-bar mustache called us riders all together, then hitched himself up on the top metal rail of the corral.

“Dang, that’s cold!” he cried. Then he, Max, settled into giving us his safety spiel while warming the pipe at the same time. “Never lost a rider,” he said, “and you don’t want to be the one who breaks that record. Makes for lots of paperwork, and we won’t be very happy with you.” 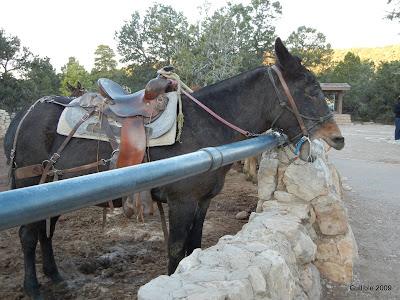 I know, 7 a.m. is too early for me too.
He talked some about the mules, the history of mules in the Canyon, and what to do when we encountered hikers on the trail. The most important piece of advice, though, was to turn the mule’s head towards the outside edge of the trail when the wrangler brings us to a stop.


We were introduced to the proper use and manipulation of the mule motivator—a whip. Max stressed the importance of keeping the mules in a tight string. “If you look between your mule’s ears, all you should see is the butt of the mule in front of you. If you see ground, you’re too far back. Use that motivator.”

Then to prove it doesn’t hurt the mule, he slapped his own leg hard with the crop. The reason for the “tight string” became heart-poundingly apparent to me a few hours hence, but at the time I thought it was mostly to keep us close together so the wrangler could keep an eye on us. 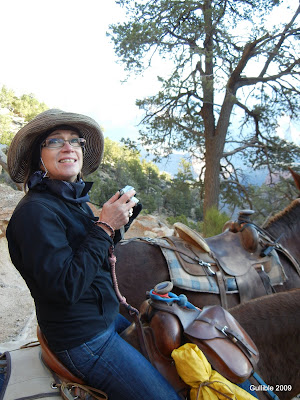 We were all given the opportunity to back out of the trip now with one hundred percent refunds. Once we mounted up and followed our wrangler out of the corral, across a pathway and set four horseshoe-clad feet on Bright Angel Trail, though, there would be no refunds. I really thought the lady standing next to me might be having second and third thoughts about this whole thing. She said she was afraid of the mule and afraid of heights. She was shaking hard enough to convince me.

The Shaking Lady in a better moment.

I was shivering myself, but from cold, not fear. Well, I was a little concerned about how my knees were going to hurting in a few minutes, but I wasn’t concerned with the mule (he was more sure-footed than I am) or with heights (I spent half my childhood in a tree).

Nor would there be any refunds if any of us misbehaved according to the safety protocol. The wrangler had the ultimate authority to make us dismount and walk out on our own.


So with important words and a funny delivery ringing in our frosted ear drums, we lined up with our toes on a line in the corral dirt. Max strode up to Shaking Lady, handed her a leather pouch that hung over the saddle horn, and administered the mail carrier’s oath in which she even promised to dive in the Colorado River after it should it somehow fall into same. 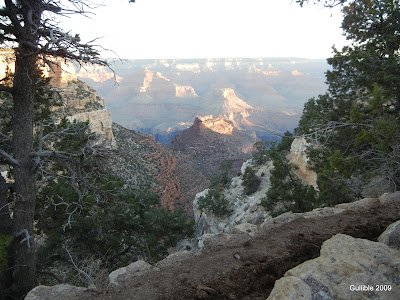 The wranglers sized us up—literally—and assigned us to the mule of their choice. I was assigned a huge barrel of a mule called TC, and then spent the entire two-day trip wondering what those initials stood for. TC was so tall and, umm, stocky I could just touch the saddle horn with my longest finger.

A wrangler gave me a much-needed boost into the saddle and adjusted the stirrups. The braided red cord of my water-filled bota bag was double-wrapped around the saddle horn, my little plastic bag of “luggage” slipped into a saddle bag, and my yellow “Mule Rider” rain coat tied to the front of the saddle.

Within a few minutes, we were ready to go. Positions were assigned. Shaking Lady aboard Milo was right behind the wrangler, TC and I followed, another lady on Mercy, then the three men--Jack, John, and Bill were last. 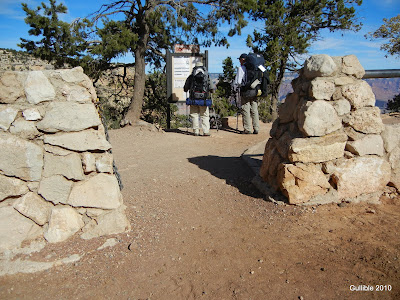 The sun was up and it had been daylight for a while now, but there was no warmth in it. We didn’t know then that the trail was in shade, and cold, all morning. Shivering, shaking, and full of anticipation, we boldly rode out of the corral... 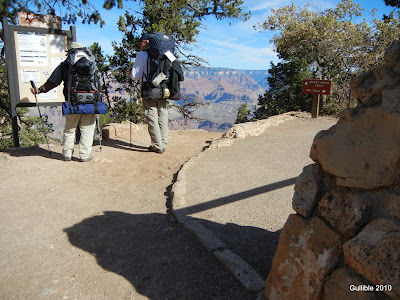 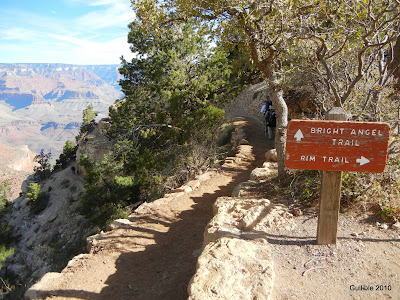 and headed down Br 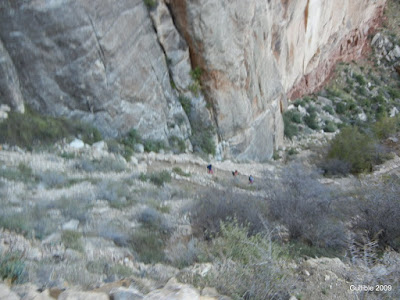 Those little bitty spots are hikers.