The Grand Canyon Journals, Chapter Three, Into the Valley of Death Rode the Oblivious

Shivering with cold but bound by oath to carry the mail to Phantom Ranch a mile below the South Rim of the Grand Canyon, Shaking Lady spurred her mule out of the corral, across the walkway, and onto the Bright Angel Trail. 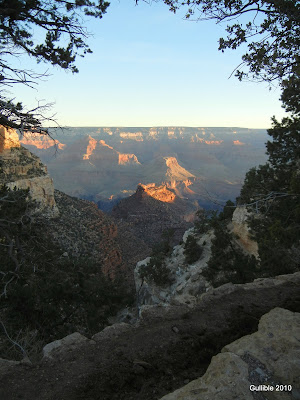 Actually, she probably didn’t do any spurring at all, though her quivering legs could have been misinterpreted as such. She probably couldn’t have prevented Milo the mule from following the wrangler no matter how hard she tried to turn away from the abyss. Those mules knew exactly what they were doing and where they were going. 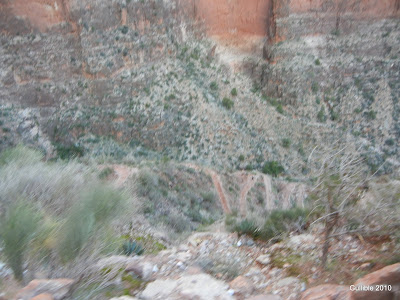 “Never lost a rider” in the more than a hundred years mules have been carrying people into the Canyon, they say. I’m sure Shaking Lady didn’t want to break that record any more than I did, so we began our descent of the nine plus mile trail just as the rising sun was bathing the spires and buttes and cliffs of the canyon in soft morning light. 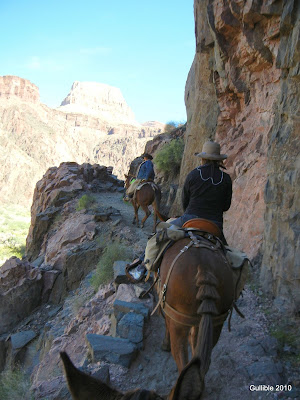 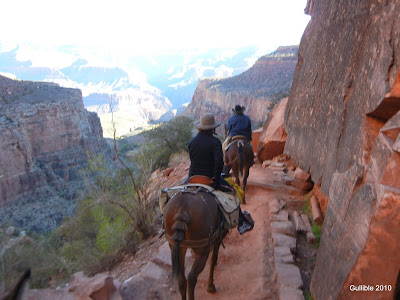 rocks on both sides, 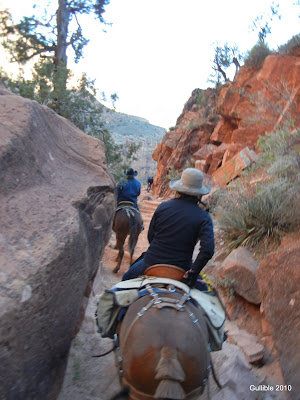 nothing on one side. 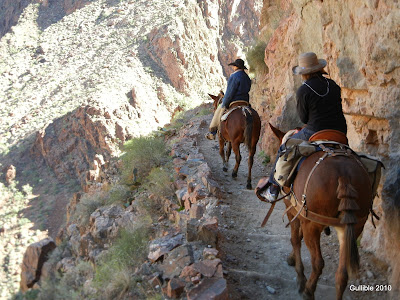 Down the switchbacks of Jacob’s ladder. Seven mules just doing what they do. I quickly discovered my mule, TC, had a penchant for living on the edge. Literally. Time and time again I noticed he chose to walk on the outer edge and that left my leg hanging in outer space until it came to rest in the stirrup. I kept reminding myself the mule’s legs were way back under its belly and nowhere near the edge. 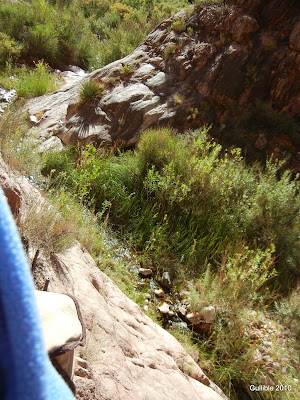 I also noticed that he sometimes chose his edge walks at the moments when I was otherwise occupied—gawking at the scenery, trying to turn on my camera with cold, gloved fingers, or generally not paying attention. Then, my flights of fancy concluded, I’d return my attention to TC and our whereabouts, only to find TC out there again on one of his death-defying space walks. Twice he startled me this way. Most of the time I’d see him move over and all would be well with mule and rider.

I thought about this for a while and remembered what my first lead dog used to do when I harnessed her and the team to a sled. At the time, we were living in Girdwood where there were no off-road trails right from my cabin, so we’d head on up the only road in town. Kolie would move the team to different areas of the shoulder snow until she found the spot where the sled pulled the easiest.


TC was doing much the same, I thought. He was walking where the trail was easiest on his feet, away from the exposed rocks and stones, looking for the places that had dirt and better footing. His shod hooves would sometimes slip on bare rock and he’d stumble, but in the dirt he was as sure-footed as a ….well, as a mule.


Finally, four and a half miles down the trail and still in the shade, we reached Indian Gardens, a little oasis in the stark dryness of the Canyon. I pulled TC up to the hitching rail and dismounted. 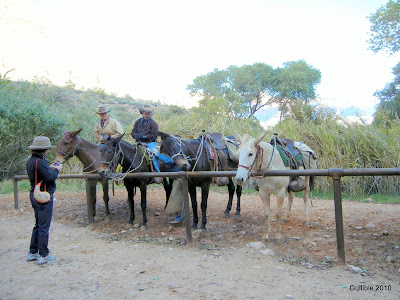 The heck I did. TC pulled himself up to the hitching rail and I sat there like a crash test dummy after impact. I didn’t trust my knees to hold me once I was off that mule. Excruciating knee pain had started not too long into the ride and now it was searing brand marks into my soul. Wrangler Tina told us to stay mounted until she came to help. 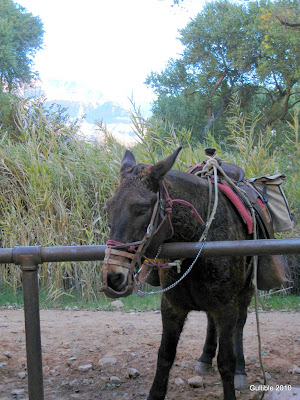 
I had trouble lifting my right leg over the saddle bag. Shoot, I had trouble lifting my leg out of the stirrup, much less raising it high enough to drag across the saddle and mule’s rump. Tina was right behind me, though, and as I gracefully slid (free-fell) down the mule’s side to the ground, she hung onto me until I was sure (guessing, hoping) my knees would not collapse.

"I’m okay now,” I lied, and when she turned loose I “walked” stiff-legged to a nearby bench and sat down to rub my knees. She helped four more riders dismount and then stacked the lunch boxes on the bench about ten feet from me. I continued rubbing my knees. Some of the others headed uphill to the restrooms. I rubbed my knees. 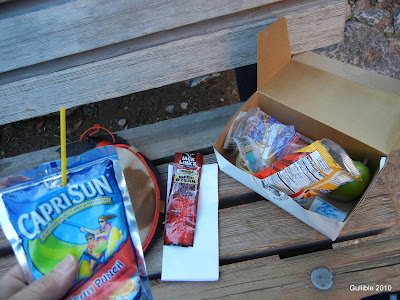 They came back and selected a lunch. I rubbed my knees. Pretty soon I was the only one sitting with the mules and flies, rubbing my knees. After a while, I stood up, staggered over to the remaining lunch box, and then stumbled uphill to a bench away from the mules and flies. I could never have passed a DUI field sobriety test based on walking alone. 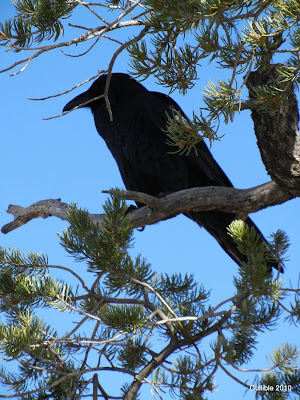 The ravens showed up right on schedule. They have turned into moochers. Big time moochers. They like Fritos corn chips. 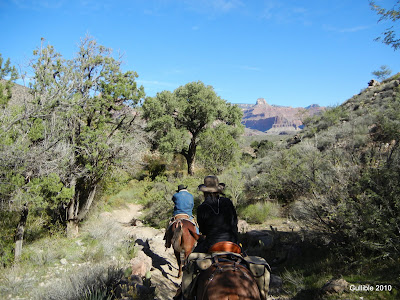 By the time we were ready to leave Indian Springs, I was walking normally again. A mule train arrived from Phantom Ranch with those who had gone the day before and were returning to the South Rim. “You haven’t seen anything yet,” they all said. We’d already passed two strings of pack mules that were on the way up.

Every day, ten pack mules and two wranglers on mules go to Phantom Ranch, stay overnight, then return. Each string of five pack animals is capable of carrying a half ton of supplies, and everything—including the food we would consume that night and the next morning—was carried in by mules. They also carry packs for hikers and rafters. The Park Service has its own mules and packs in its own supplies. 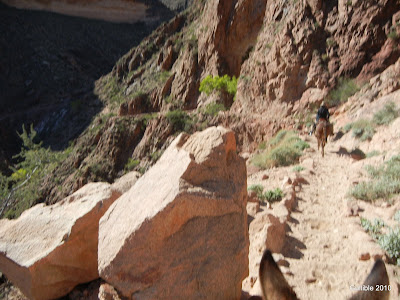 My favorite photo of the whole trip.

Previously, Shaking Lady, whose real name was Peg, would apply the motivator to Milo, who would hasten to catch up, and TC would increase his pace also. Now he stopped being motivated by proxy, so it was just damn fool luck that when disaster fell, TC was close to Milo and Mercy was immediately behind us. 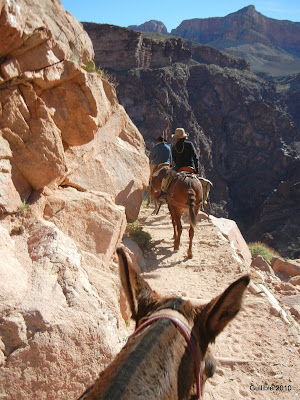 But first we had to go around Jesus Corner. See the picture above. It’s named Jesus Corner because that's what what people say when they see it. No description necessary.


“Don’t let your mule make a pit stop through here,” Wrangler Tina warned. “Motivate them through this stretch.”

So mules being mules, we strolled around Jesus corner and about twenty feet farther before TC called for a pit stop. And there is nothing, absolutely nothing you can do when a mule stops and gallons of urine pour forth and create a large lake in the middle of the trail. They can poop on the fly, and do so frequently, but they have to stop to urinate.


I don’t know why Tina wanted no pit stops through there, but I could do nothing except sit there as TC showed everyone who was in charge. Tina’s reason might have been for safety. After all, we had just rounded Jesus Corner and were now in the Devil’s Corkscrew, a particularly wicked series of steep switchbacks with hairpin corners.

Finally the torrential flood abated and we continued on our way. I was chastened, but that was nothing compared to what happened next. A few switchbacks farther, along one of those stretches with rock walls on the left and nothing on the right, I needed a drink of water. I carefully undid one wrap of the bota bag cord from the saddle horn, bent over, and raised the bag high enough to squeeze out some water. Theoretically, the cord was still around the horn, so I have no idea how the bota bag fell to the ground with a loud squishy thud when I lowered it to rest alongside the saddle.


When that unknown flying object hit the trail between the fore and aft legs of that mule, that mule freaked out and spun away from the UFO and headed in the opposite direction.


“Whoa! Whoa!” I said. And he did, but certainly not because of my verbal commands or my pulling back on the reins. He stopped because of two things: a) the bag fell on the left side so when TC spun away from it, he turned right—where he immediately saw the drop-off, and b) Mercy was right behind him. As soon as he saw the other mules standing calm, cool, and collected, and he realized he had nowhere to go, he settled right down, pointed out over the edge like he was supposed to do when stopping.


(No photos available of this embarrassing incident.)


And that, I realized, is why the wranglers want the mules close together. If he’d had room to run, no telling what might have happened. 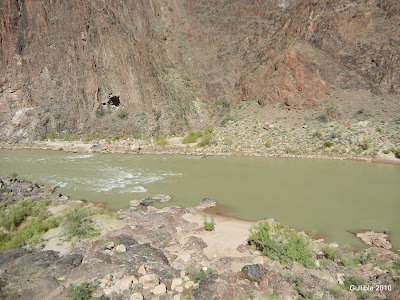 Out of The Furnace and along the Colorado River.

With that, TC went back to sure and steady—and trying to scrape me off against the vertical walls. It was a little game we would play the rest of the way to Phantom Ranch. 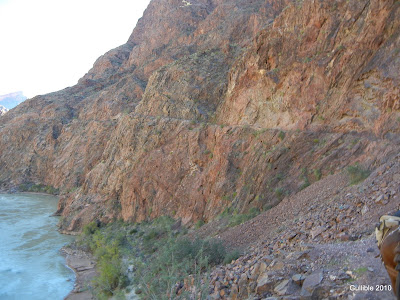 See that little line scratched into the cliff? That's our trail along the Colorado River.