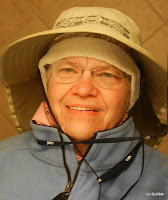 I’m no dummy. I knew this string of seven mules with riders was heading for Phantom Ranch. I knew the ranch was located in the bottom of the Grand Canyon.

I knew a cabin awaited me there, and where there’s a cabin there must be a bed. A nice, soft bed—softer than the saddle that was wearing blisters on my behind. A place where I could straighten out my knees and let the kneecaps wander around until they found their proper place. A bed—a respite from pain.

I also knew the Colorado River was at the bottom of the Canyon.

Like I said, I’m no dummy. Lacking certain information does not make one a dummy. Some might say getting on a mule and riding ten and a half miles down into the Canyon might qualify one as beyond dumb, but I prefer “adventuresome.”

The information I didn’t have consisted of several things:

a. Just where is Phantom Ranch? The river’s right in front of me. Where the heck is my bed? 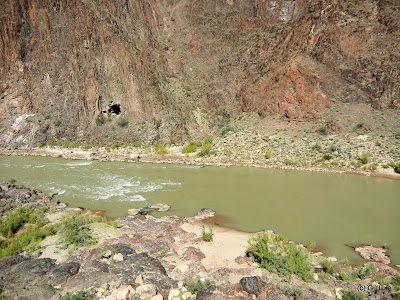 Our first view of the Colorado River. We had descended from 7500 feet elevation on the South Rim to 2550 feet, and that little sandy beach looked mighty tempting.


b. Okay, so maybe it’s upriver or downriver a ways. Which way do we turn? 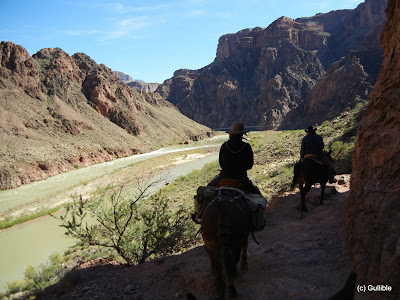 Our first view of a bridge across the Colorado River.


c. What?!!! We’re at the river, we’re almost a vertical mile down from where we started this trip. So, why are we going back up again? 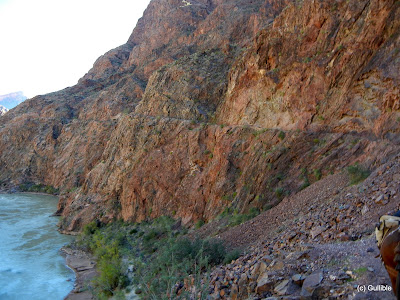 That diabolical trail along the Colorado River.

d. A bridge. At last, a bridge. Almost there. 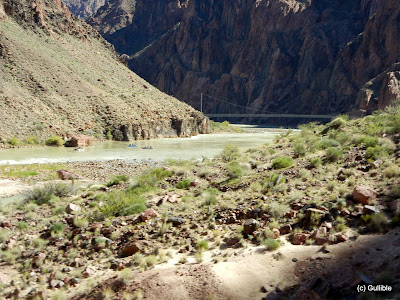 One raft is in the rapids and two more are visible on the left side of the river, with the hiker's bridge in the background.

e. OMG… This is NOT our bridge? How much farther is OUR bridge? 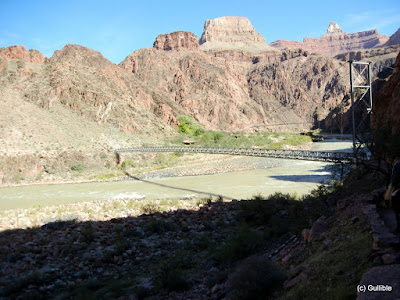 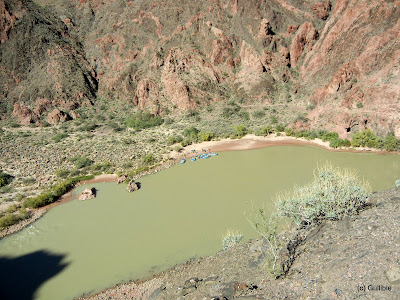 Rafters pullout near Phantom Ranch. The trail can be seen as a faint light line at the base of the cliffs.
g. Through that black tunnel? On a mule? You’re kidding me, right. Right? Oh… 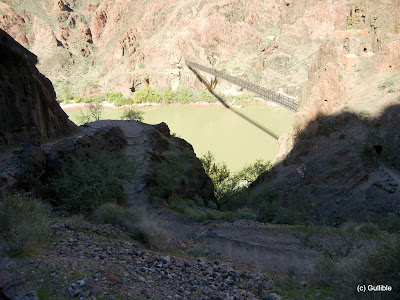 The tunnel entrance is at the far right, about half-way up the picture. The switch-back trail down to it is barely visible in the foreground shade.

Okay, so maybe I am a dummy. But, I was having fun. My knees and my butt weren’t having fun, but the rest of me was.

We turned upstream at the river and started UP the trail. I mean UP as in “climbing again.” That did not seem fair. In fact, it seemed as diabolical as having to climb a number of steep steps and stairs to reach the restrooms located at certain rest stops on the trail. Diabolical, I say, especially when one’s knees are threatening to quit their day job and retire forever on Medicare.

But up we went. The sight of rafters and kayakers in the river took my mind off the knee pain for a while, as did trying to take an in-focus photo from the back of a mule that was trying to scrape me off its back. No more walking on the edge. On this trail, he was right against the rock. Or, maybe the trail was narrower. 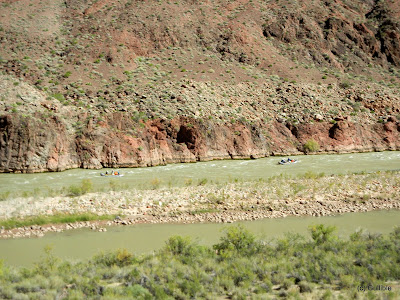 And then, I saw the bridge. Ah-ha! The bridge to Phantom Ranch. I saw Tina the Wrangler pointing at some buildings almost hidden in the foliage across the river. 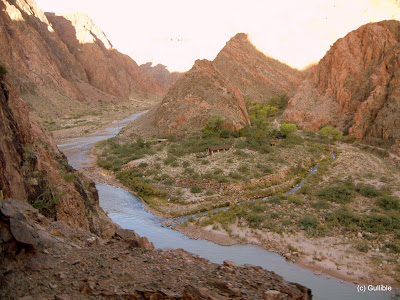 Phantom Ranch is up the valley to the right. This picture is looking back at the trail we had just covered. The hiker's bridge is barely visible where the river makes a bend at the left.


A bed, I thought. I could barely hear her as TC the Mule was lagging far behind again. After a little motivating, he caught in time for me to hear something about a Park Service wastewater treatment plant. Well, I didn’t want a bed there.

We got closer to the bridge. Almost there, I told my knees and butt. Almost.

Then I heard that diabolical wrangler say, “This isn’t our bridge. This is for hikers. Our bridge is the next one.” Oh, Lordy. In the span of two hundred miles there are only two bridges that cross the Rio Colorado, and this one wasn’t ours. 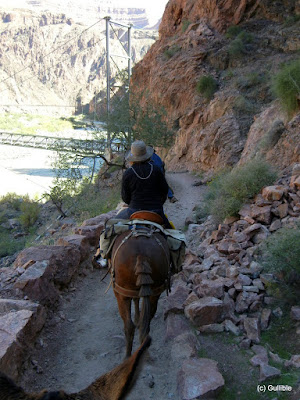 I almost cried as we dodged around the abutment. Then I looked at the surface of the bridge and was really, really glad I wasn’t riding a mule across the grill walkway, even if it did mean more time in the saddle. 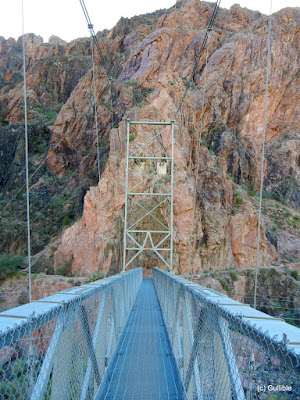 Steel bridge, open steel walkway, and it swings when you walk on it.


I could see “our bridge” a ways upstream. I couldn’t see a trail that led there until I was on it. This had to be the most wicked part of the trail. Rock wall on one side, nothing for hundreds of feet on the other—until you reached the roiling river below. 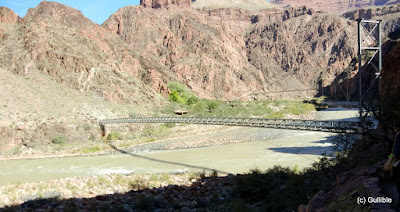 Hiker's bridge in foreground; mule bridge is a faint line under in the background.

Tina the Wrangler brought us to a halt (mules facing out over the brink) before we rode the last few hundred feet into the tunnel and over the bridge. We waited while some hikers cleared the trail. “We don’t want to run into hikers in the tunnel,” she said, and I knew she was thinking about what would happen if the mules spooked at a hiker in the dark.

Then, we were on the bridge. Thick wooden planks gave the mules sure footing as we crossed the green water of the Red River, which is what Rio Colorado means. It used to be red, that river. Red with tons of silt. Now, with the Glen Canyon dam way upstream at Page, Arizona, the river runs green. 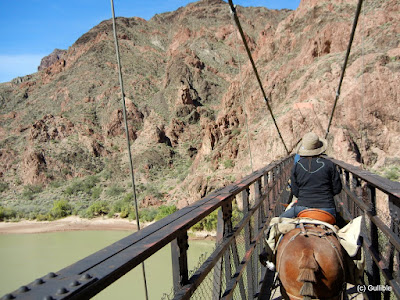 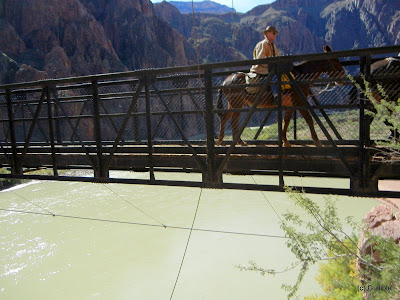 My mule stepped off the bridge, circled around under it, and headed for the barn, just like an old riding stable horse with long ears. They knew, too, that the “adventure” was almost over for them. They’d get rid of those greenhorn riders, get some chow and water, maybe roll around in the dust of the corral, and forget all about this “adventure” until morning. No problem with TC keeping up with Milo in front of him now. 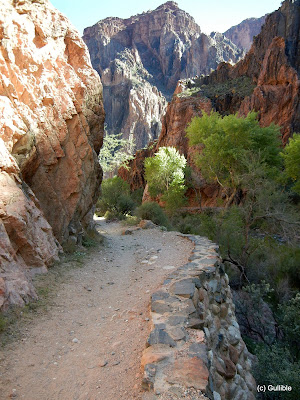 Trail into Phantom Ranch. The sharp ridge at right separates the Ranch from the Colorado River.


Once again, Tina helped us all from our saddles. I hobbled over to a bench and sat. I stood straight up again when my butt touched that hard bench. With my knees in total rebellion, I sat slowly and carefully the second time, and rubbed my knees.

We were greeted by David, the Ranch Manager for the last eight years. He was friendly and cheerful as he explained the routine, the various buildings, meal times, location of amenities, and so on.

And then, he turned as diabolical as the trail, the mules, the uphill restrooms, and the bridge-not-far-enough: “I know your bed is going to look mighty inviting and you’ll really want to take a nap. Don’t do it! Seriously. You should drop your gear and take a walk around the Ranch. Walk it off. You’ll be stiff and sore in the morning if you don’t. Don’t take a nap.” 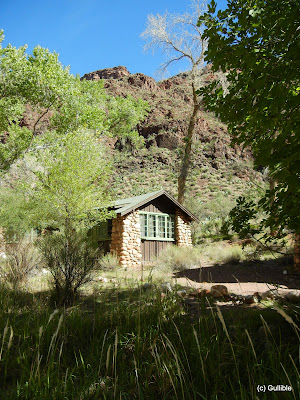 My cabin with its teensy number on the door, so I had to inspect each cabin until I found mine.


He was right. Once I found my cabin (it was the farthest one away from the corral), that bed looked more than inviting. It was the most seductive thing I’ve ever seen, other than… Well, never mind. 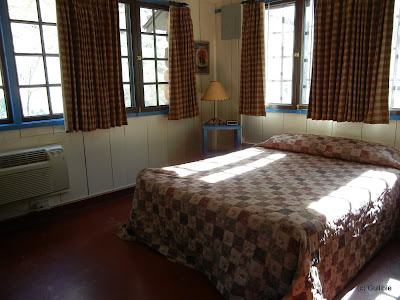 "Oh, my love, my darling,
I hunger for your touch.
A long, lonely time.
Time goes by so slowly"
and all I want to do is fall into you and sleep off the saddle-sores!
(to be continued)
Posted by Gullible at 1:56 PM