Homer, Alaska, bills itself as at “the end of the road.”  That’s true.   It is indeed situated at the end of a road—this one the Sterling Highway.
There are a few other towns that bill themselves, or could, as at “the end of the road.”  Seward is one, located at the end of another road.  But, Seward could also call itself “at the beginning of the road” because Mile 0 starts in Seward at the edge of Resurrection Bay.  Anchorage people have a hard time understanding that the Seward highway terminates, not starts, in their city, because in Anchorage, it is a major north-south freeway.
But Homer has one a few other claims to fame.  It’s called the halibut capital of the world, too, for its incredible halibut fishery.  And, it’s known as an enclave of artists, writers, photographers, etc.
So it should come as no surprise that even the garbage can has seen the attention of an artist.
What began as a lowly 55-gallon drum, filled with whatever its manufacturer deemed, was pressed thereafter  into service as a garbage can at an overlook on the highway hill above Homer.  It was lined with a plastic bag and topped with a plastic cap—one with a swinging panel to allow depositing of trash.
What caught my eye was the imaginative use of dripping, running paint.  Kind of resembles my painting when I’m trying to do paint a wall or something else with a smooth finish.
In this case, however, it works.  Behold the designer garbage drum: 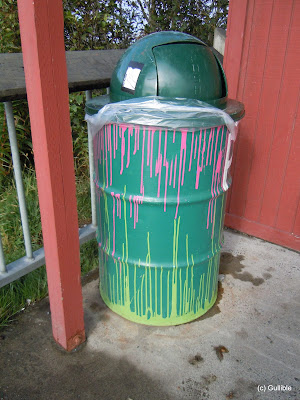 Email ThisBlogThis!Share to TwitterShare to FacebookShare to Pinterest
Labels: Homer